This year’s Formula 1 calendar has officially been shortened by one race, after organisers decided not to replace the recently cancelled Japanese Grand Prix.

Despite being reduced from the original 23-race plan, the current season is still set to feature a record-breaking 22 grands prix.

Some autumn race dates have been shifted in the revised calendar, published today, dismantling the scheduled series of three triple headers, which would have seen a gruelling nine F1 races in 11 weeks.

The Dutch and Italian Grands Prix will take place over the next two weeks as originally planned, and the Russian Grand Prix will also take place as scheduled on September 26.

But the Turkish Grand Prix has now been pushed back a week to October 10, which was originally the slot for the Japanese race. 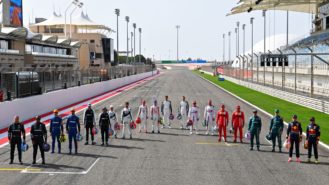 Does Ferrari really have the best F1 driver line-up?

Ferrari team boss Mattia Binotto claims he has the best drivers in F1. Chris Medland weighs up the competition for strongest driver line-up

The paddock will cross the Atlantic for the United States Grand Prix as planned on October 24, but will now have an additional week between the Texan race and the following round in Mexico, on November 7.

The Brazilian Grand Prix follows a week later and one race venue remains to be confirmed on November 21.

There’s no change to the late finish to this year’s season: the final two races in Saudi Arabia and Abu Dhabi take place on December 5 and 12.

“The pandemic continues to present the season with challenges but we have proven we can adapt and we are confident we can deliver a record-breaking 22 races this year despite a global pandemic,” said F1 CEO, Stefano Domenicali.

“We will provide the details of the final addition soon. This season is proving to be an incredible battle on the track. Thos is hugely exciting for our fans around the world and we look forward to the intensity continuing in the races ahead.”