Can Mick Schumacher turn his season around and convince the sceptics that he’s made of the right stuff? A strong weekend in Baku, a venue that always opens up opportunities for midfield runners to overachieve as others slip up, would certainly help.

The Haas driver’s huge Monaco crash shone a spotlight on what has been a difficult 2022 for the youngster thus far. After a low-key learning year with a hopelessly uncompetitive car he now has a machine capable of qualifying and finishing in the top 10, as Kevin Magnussen has demonstrated. The Dane has also provided Schumacher with a benchmark that he didn’t have last year with fellow rookie Nikita Mazepin.

There have been some positive signs and the odd decent qualifying session, but unfortunately the overriding impression created by Schumacher is of a trail of destruction after his huge accidents in Jeddah qualifying and in the Monaco race. Both were big enough to wipe the gearbox off the car.

“It’s just a matter of being 10cm out of place, and things go very wrong”

You could argue that he’s been unlucky, in that a couple of mistakes elsewhere would not have been so destructive or as high profile. Plenty of others have made errors this year, including both Ferrari drivers.

But then you can also throw in Miami, where he was destined to score his first points but misjudged a move on his pal and mentor Sebastian Vettel, and ended up with nothing.

It all contributes to the conclusion that Schumacher is trying just a little too hard, running too close to his personal limit and not leaving himself enough margin.

Team boss Guenther Steiner has warned his young driver in public, saying that there are a “queue of drivers” wanting his seat and admitting that the team is exceeding its repair allowance as a result of the crashes.

The last thing Schumacher needed after Monaco was to go to a street circuit that’s well known for catching out the unwary, but he insists that he doesn’t need to boost his confidence.

“No, normally not,” he said in Baku on Thursday. “I mean, we go to a completely different track. And also if let’s say I would have gone back to Monaco now, it wouldn’t have been a problem just because as racing drivers we go through that from a young age, and already in go-karting you go through these things, and you just get back into it and set off where you stopped.

“It’s track that I usually enjoy. I came here [to Baku] in F2, and I felt quite comfortable and confident. We have a lot of overtaking opportunities here, especially this year with these cars, I’m sure that there will be a lot of action in general, and it’s just a matter of how much action will there actually be, and being in the right spot at the right time.” 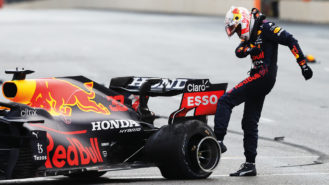 Baku's greatest hits: why the Azerbaijan GP is F1's most exciting street race

Few Azerbaijan GPs have passed without incident, so we've run down every race in the 'Land of Fire' – will 2022 be similarly dramatic?

Clearly this weekend Schumacher wants to be one of those benefitting from misfortune for others, rather than being the trigger for a safety car.

With a better car and quicker team mate he’s had to raise his game in his second season, and he admits that it’s not always easy to find the limit.

“Especially in the midfield this year it’s so tight, so it’s just a matter of being 10 centimetres out of place, and things go very wrong. I mean, nobody thought about the kerb beforehand in Jeddah for example, it being a trigger to these accidents. In Monaco, obviously conditions were quite tough.

“So yeah, there’s obviously the evaluation of risk and reward. And we try to obviously be in the points, and therefore we have to go into some sort of risk. But yeah, it’s definitely something where I’ve just got to learn a bit more, and understand a bit more.

“For me, I probably don’t consider it as a real second year, just because you start learning so much new stuff, and the cars are different compared to last year as well. So it’s just a matter of pulling up what I’ve learned from last year, and taking that into this year, but then just putting it into play for these circumstances.”

Those 10 centimetres proved decisive in Monaco, where he candidly admits he got it wrong.

“The whole track was quite damp in parts, and some others were quite dry. We came a bit wide in Turn 12 [Tabac] which cooled down the right hand side. And then when going through chicane, I actually took it easy for the circumstances, for the conditions.

“And I just misplaced it a bit and was basically 10 centimetres on the wet patch, which then triggers a double wheelspin in that case, because we have so much power, and that kind of then just threw the car into into a half-spin, I’m trying to correct it, and it goes into the wall.

“It came out of the blue. And I spoke to other people, and most of the feedback that I got said it does look really weird. We can’t check if anything broke, actually. But data suggests not, so just seems like a wet patch.

“It was really odd, because also the accident itself wasn’t in any ways hard. To have it split in two again is quite unfortunate, because obviously it’s a lot of damage in that case.”

Schumacher is hoping that his season follows a familiar pattern from the junior categories, in that it gets better as time goes by.

“Yeah, exactly. And it’s a matter of being in the right spot at the right time. And I’ve said this since quite a while. I’ve had these circumstances before, such as in F3, or in F2, where I started off in a very difficult position, and then got a lot of pressure. And that kind of just made me go quicker. So feed the pressure!”

Expanding on the theme he adds: “It’s how you use the pressure. And I think that I start to use it in a different way. And it’s just more motivating and giving me more of a different dynamic, I guess.”

Last year things got a bit messy at times with Mazepin, although generally Schumacher was the faster of the two. This year he faces much stiffer competition from the experienced Magnussen, who returned to the sport with confidence high and nothing to lose.

He laid down a marker by taking fifth in the Bahrain opener, and despite bad luck of his own has subsequently logged a pair of ninth places. Schumacher meanwhile has not bettered 11th.

“Yeah, it does feel different for sure. I mean, we have a car which can fight for points. But I also have a driver that I can compare, or let’s say we can push each other to do better and to go quicker.

“And so it’s a very different approach, but it’s something which I’ve had also in F2 where for example, my team-mate had a very good start to the season. But then that completely changed towards the end of the season. So I’m not stressed by it, I’m just ticking the boxes and getting there bit by bit.”

He’s also had to get used to fighting in the pack rather than just with his team-mate at the tail of the field.

“It’s very different. I mean, if we take it back to F3 or F2, it’s a very straightforward way of overtaking or fighting. In F1 you have so many different tools that you can use, which basically you do have to use, if you want to make a successful overtake.

“So it’s something, frankly, that I’m learning from from scratch since the beginning of the year. And I feel that I’m getting more and more comfortable.

“Obviously all cars have the benefit and negative sides, so honestly it’s hard to point out for us what’s good and what’s bad compared to others, just because it’s so hard to judge.

“But I think it’s a matter of if you get it right, you’re in front of the midfield, if not then you’re right in it or behind. We basically try and be perfect every time to be able to fight with the top of the midfield.”

And perfection is what he and the team need to strive for in Baku, which won’t be easy to achieve at such a tricky venue.

“We’re going from maximum downforce to basically one of the lowest of the year. So it’s going to be different, and it’s going to be a challenge for sure. And brake feeling is going to be for sure very different. I mean, we have those long straights, then braking down to a 90 degree corner, and then we have the whole tight section later.

“It’s normally a crazy weekend for everybody. We saw that last year, a lot of happenings also already in qualifying. And it’s definitely something that if you stick to it, normally it can give you a very good result.

“So we’re just going to do our job, hopefully we’ll be in a position where we can fight for Q3s and points, and the rest we’ll deal when it’s around the corner.”

We know the ability is there – you don’t win F3 and F2 titles by chance or just by being in the right car – but achieving consistent success at the top level is a different story. This weekend he has a chance to show that he can tread that fine line and stay within the limits.

“I guess you always as a driver try and risk, and get the benefits of it. I mean the midfield is so tightly packed that if you really don’t go into the risk, you end up anyways P15 or lower. And that’s not where we want to be, we want to be in the top 10. So you do have to go to a certain amount of risk.

“And it’s up to me to decide and find the right margin. I think it’s probably something which maybe in some ways, I haven’t just yet. But there are other circumstances also playing playing a role in that. So it’s just a matter of dialling that in.

“We’ve had moments before where we had very good races, but weren’t rewarded for it. And if I did let’s say get rewarded for it, I think we would have a bit of a different conversation right now about these things. So it’s just a matter of time, really.”