Finally, on day two of preseason testing there was genuine excitement as eagle-eyed observers noticed something unusual about Lewis Hamilton’s steering inputs to the W11. In addition to turning the wheel, he was also pulling and pushing it.

As the car headed onto a straight, he would pull the wheel toward his body, and as he braked into a turn, he would push it away. This action coinciding with a change in the toe angle of the front wheels.

Just after midday, technical director James Allison admitted that the team was running a new steering setup, saying. “We have a system in the car, it is a novel idea called DAS, that’s interesting and it just introduces an extra dimension in the steering for a driver, that we hope will be useful during the year. Precisely how we use it is something we’d rather keep to ourselves.” It later emerged that DAS stands for Dual Axis Steering.

We call it DAS – Dual Axis Steering! 🛠 James has an update on today's hot topic of #F1Testing… 👇 pic.twitter.com/kKDHJqzutK

So why would Mercedes want to alter the toe angle dynamically? To briefly explain, toe is the angle that the wheels sit in relation to dead ahead when the steering is straight. If the front of the wheels are pointing out, this is known as toe out, the opposite and they are toed in.

The toe angle has a significant effect on a car’s handling and changes how the tyre interacts with the road surface. Generally, a degree of toe out will aid both stability and grip on initial turn-in to a corner, however, too much toe out means the tyre scrubs – effectively it is dragged rather than rolled across the track surface.

Potentially, what Mercedes is trying to achieve with its system is a greater degree of toe angle on corner entry than it would ideally want to carry around a whole lap. If the wheels were radically toed out, this would be great for turn-in but would increase scrub on the straights, increasing tyre drag (making the car less efficient) while also increasing tyre temperatures.

This would also be an issue on long, fast corners. By allowing the driver to change toe between corners and the straights, it can theoretically get the best of both worlds. Interestingly, Allison hinted that the system would be of greater benefit at some races and less so at others.

Exactly how this toe change is achieved remains something of a mystery. As the car came in from its final stint before lunch, Mercedes mechanics tore into the front end, presumably swapping the DAS out for a more conventional setup. This involved the removal of all of the ancillaries around the inboard front suspension and, just before they finally pulled the blinds across in front of the car, the steering column was about to be removed.

There is the potential for the system to be either mechanically or hydraulically actuated. As the driver pushes or pulls the wheel, the length of the steering tie rods needs to change to alter the toe angle. This could be achieved either on the rods themselves, or at the point where they interface with the steering rack. Unfortunately, all of these components are well covered in the nose of the Mercedes. 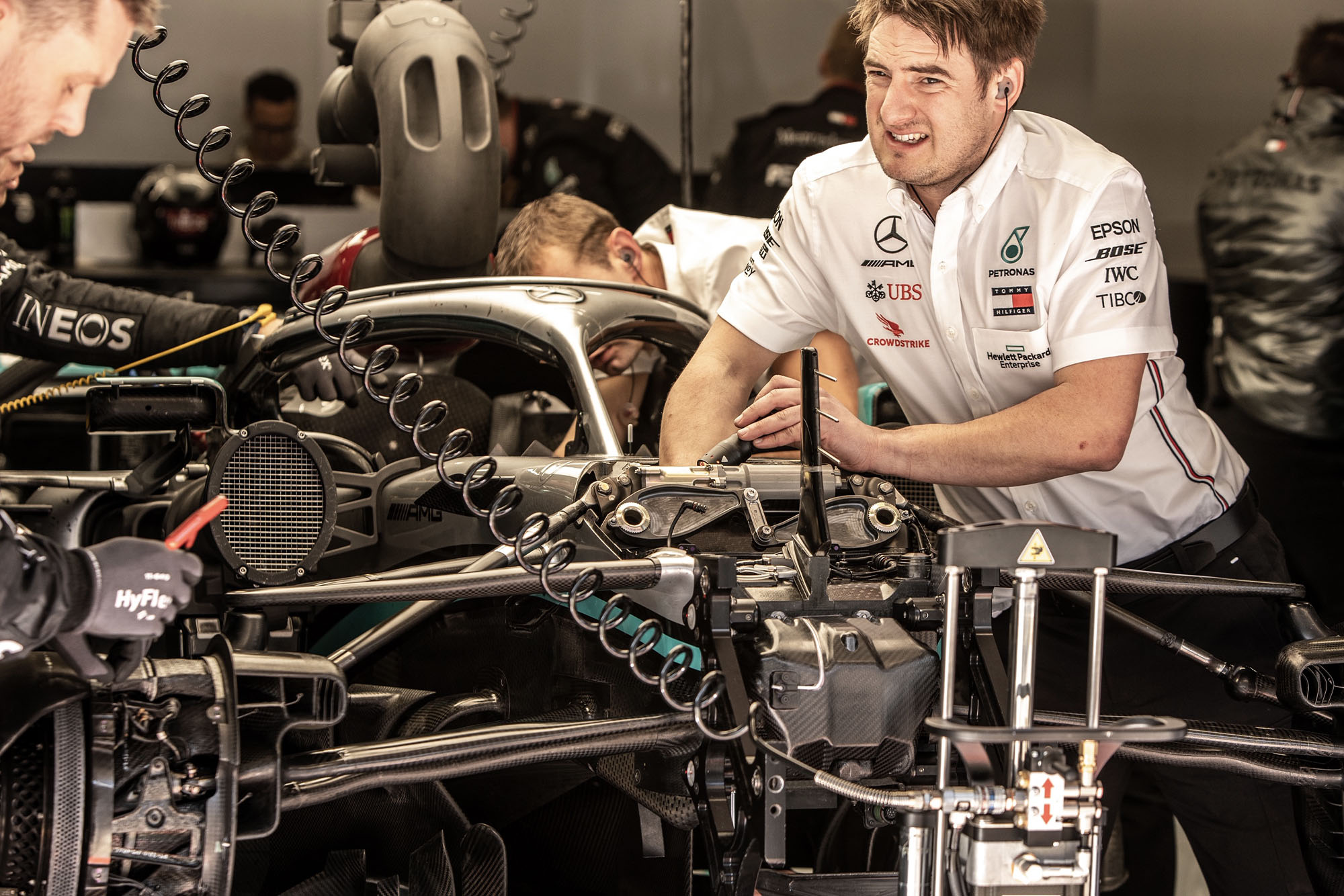 As soon as the system became apparent, there were questions raised by observers over whether it was legal, but a quick glance through the relevant sections of the regulations seemingly reveals nothing that would make it illegal. As Allison stated, “this isn’t news to the FIA, it’s something that we’ve been talking to them about for some time, the rules are pretty clear about what’s permitted on steering systems, and we’re pretty confident that it matches all of those requirements.”

From Hamilton’s perspective, DAS was just another system to use, and he was adamant it didn’t create any added distraction, or present any potential safety worries.

Further details of the system will doubtless appear over the course of the season, and the above musings are purely (informed) supposition. However, it is refreshing that even as the current era draws to a close, teams such as Mercedes are still pushing the boundaries of innovation.