The 2020 season was always going to be a quiet year for development in Formula 1, with mature regulations and a full-scale development shift for 2021 looming. However, nothing ever stands still and the first day of pre-season testing in Barcelona revealed a few interesting detail changes on the cars.

Most will change in one way or another prior to the season opener, but testing gives teams their first opportunity to ascertain whether the thousands of man hours invested in their new cars were well spent (or if they missed the mark) in the real world.

With just six days testing available, every lap has to count and each time a car leaves the pits, it will be to analyse specific elements of the car. Initially, that will mean simple systems checks, a few installation laps to check that everything is working correctly. Teams will then move on to running specific modes and setups, race and qualifying simulations and sometimes, back to back testing components.

For example, Günther Steiner explained that Haas spent the first day of testing running through a program that included checking its various brake cooling combinations.

Teams will also be trying to get a handle on tyre behaviour, hopefully an easier task in 2020 as the compounds are the same as last year. Tyre testing runs will usually be left till the afternoon, when the track is warmer and more representative of conditions in-season, with the morning spent doing aero and other evaluation runs. 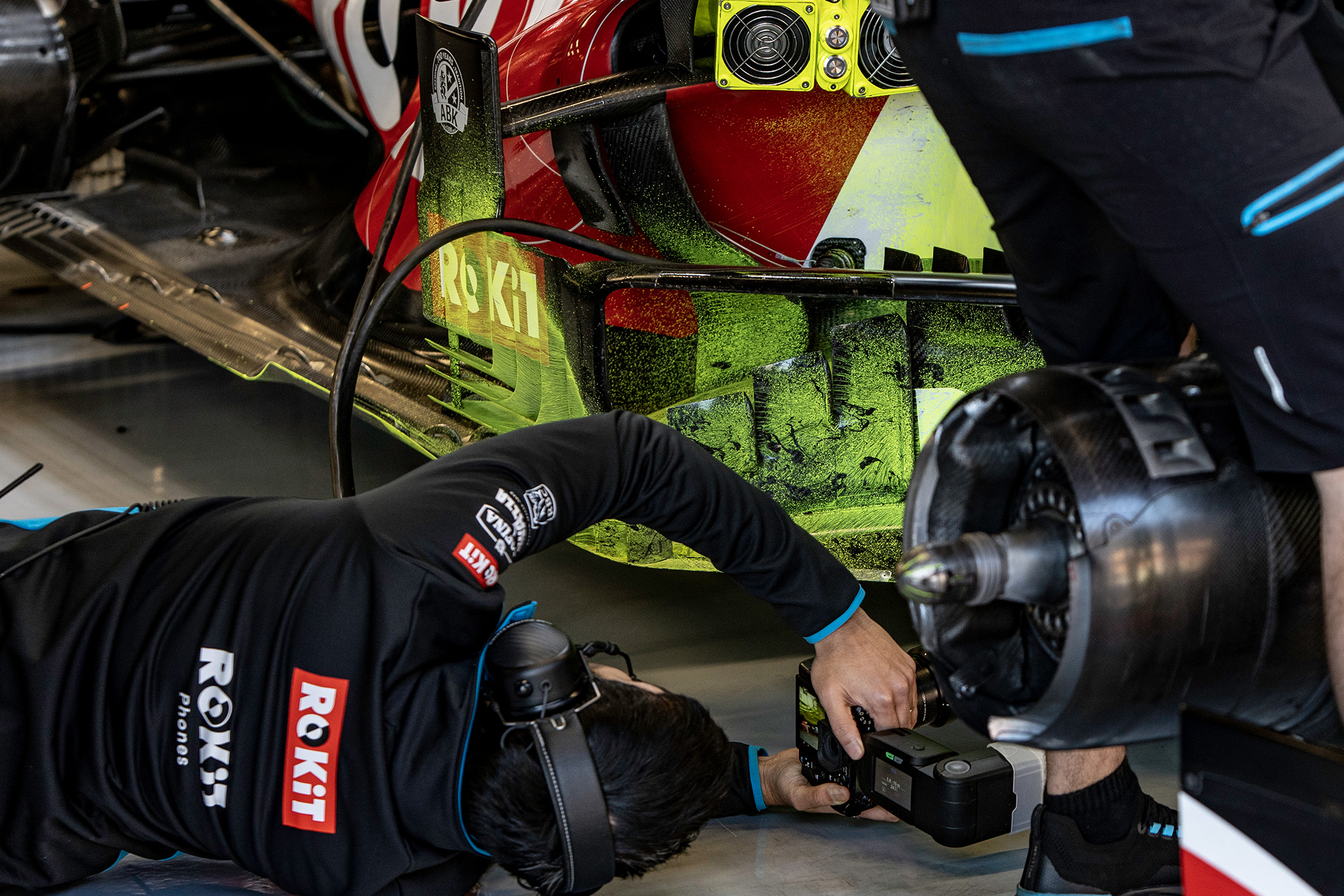 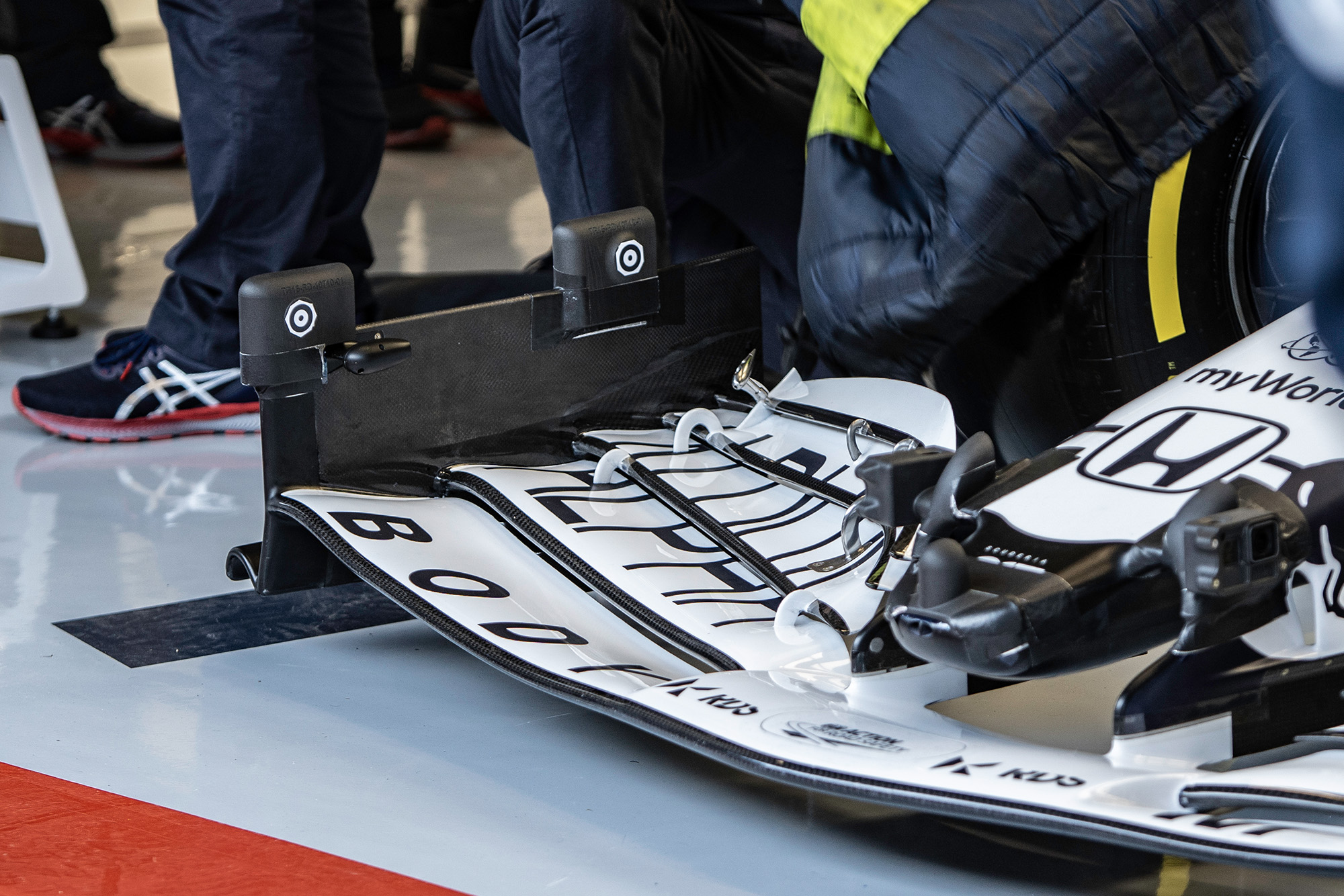 AlphaTauri’s novel method for recording wing flex, the actions cams are frame right, with the targets on the end plates 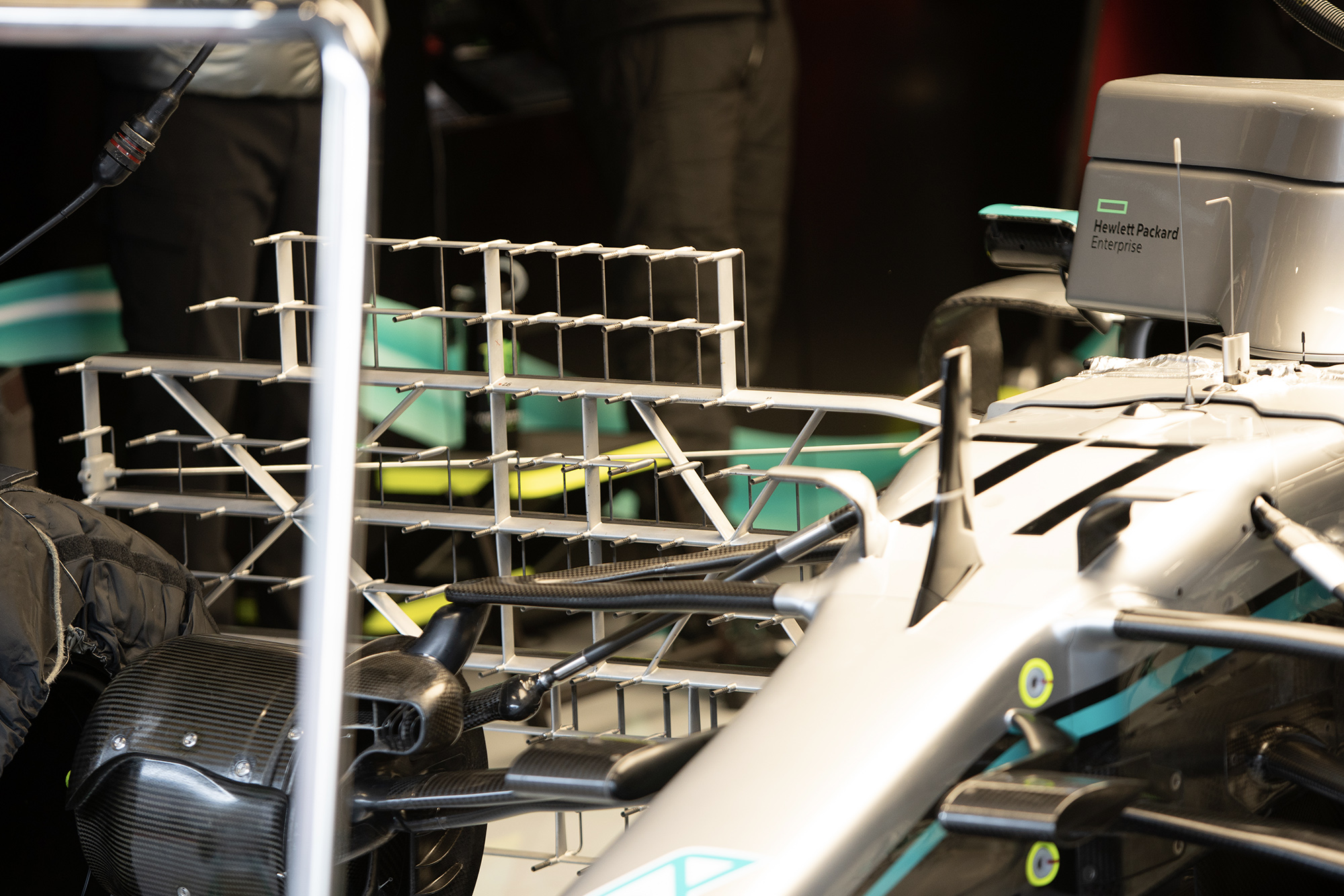 A Kiel probe array on the Mercedes on day one of testing.

During testing, teams will festoon their cars with a host of extra sensors in order to assess various aspects of their performance. The most obvious of these are the large aero rakes that get affixed to the cars in strategic positions, normally either behind the front wheel, midway down the car or behind the rear wheels.

The technical name for these is Kiel probe arrays and their purpose is to measure the airflow across a wide area, with these measurements then compared to the numbers generated in CFD and wind tunnel tests. If all is well, they will tally up and help validate those simulation results, reassuring the engineers that their development and simulation programs reflect across to reality.

The Williams pictured has a pair of such arrays and was also running smaller versions behind the rear wheels.

Another common sight will be lashings of flo-viz paint across panels, which does what it says on the tin. It’s a mixture of oil and luminous dye (normally yellow or green, but Williams seems to use a combination of yellow and blue) and is of such a consistency that it sticks to the bodywork but still flows easily.

As the car runs on track, the paint will follow the path of the air over the bodywork, giving a visual confirmation that the flow structures match those seen in CFD. For example, flow viz might flag up an area of stalled flow (where the airflow loses its energy) that appeared fine in simulations, warranting further investigation.

As a very visual representation of aerodynamic behaviour, flow viz will generally be cleaned straight off as soon as the relevant runs are complete, to prevent other teams having too much opportunity to analyse its distribution.

Then there are the other, more creative and individual testing setups. Take AlphaTauri, which ran a pair of action cameras bolted either side of the nose. The pointed directly towards a pair of 3D-printed blocks on the wing end plates with small target stickers, allowing the team to assess how much the wing was flexing at speed. 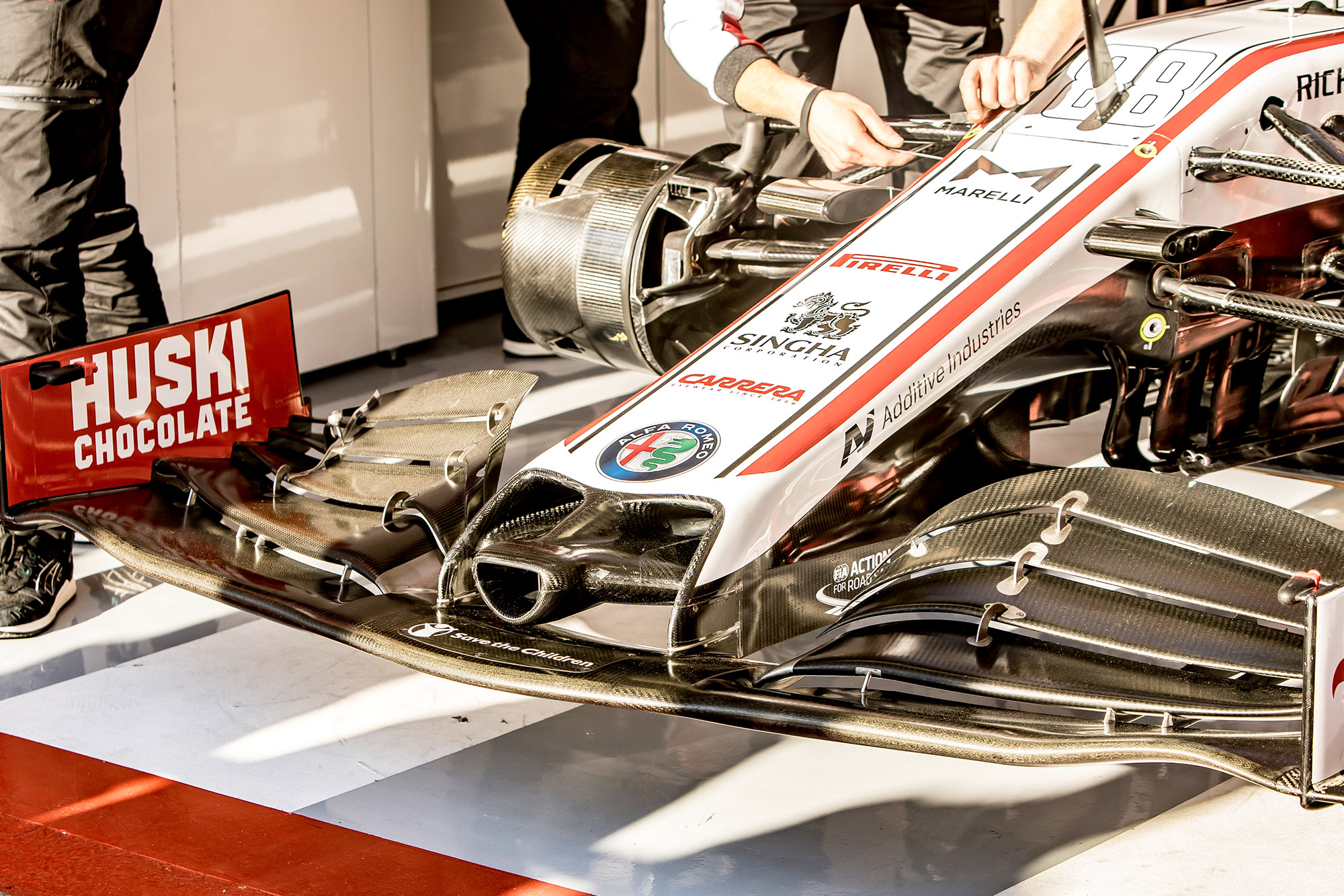 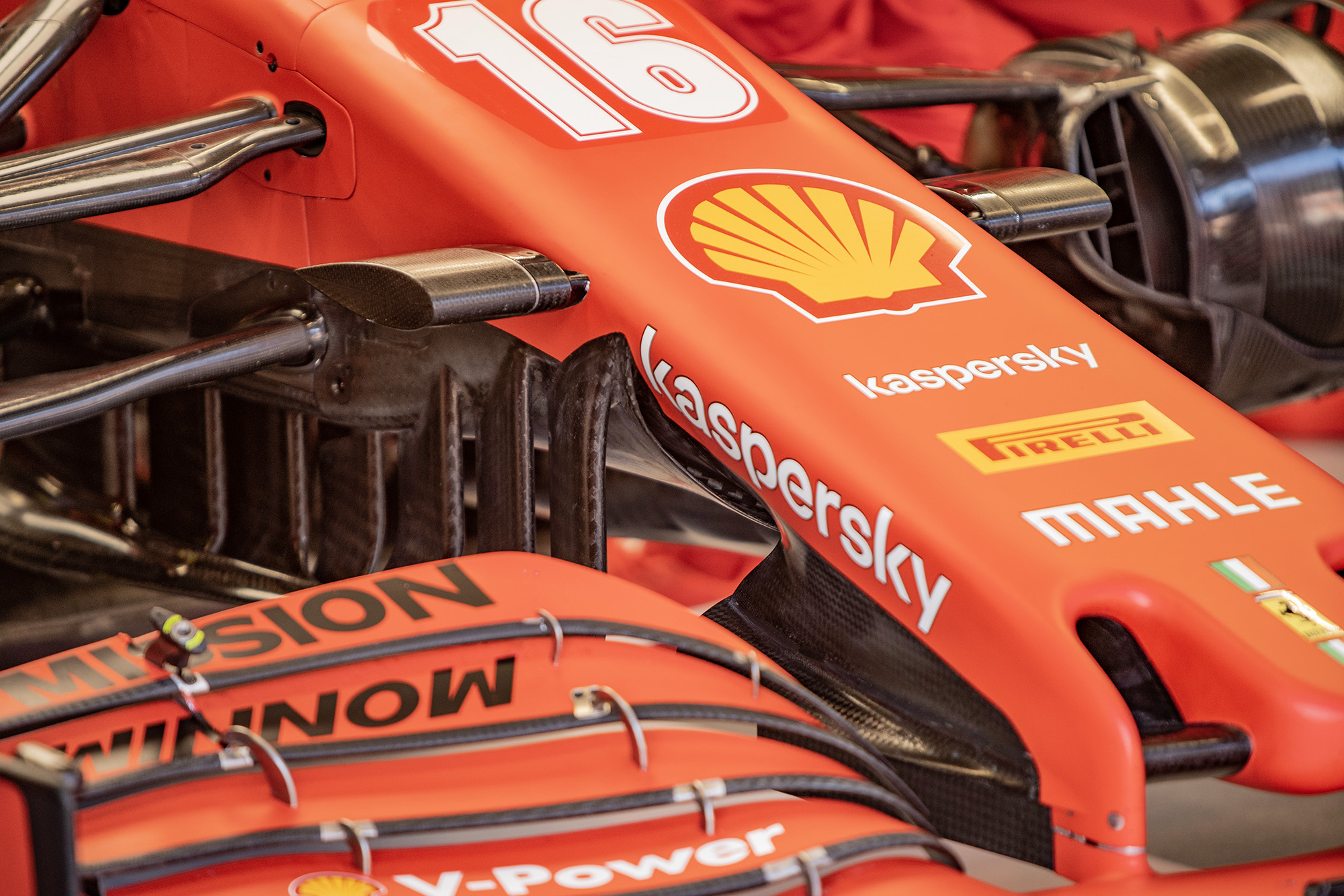 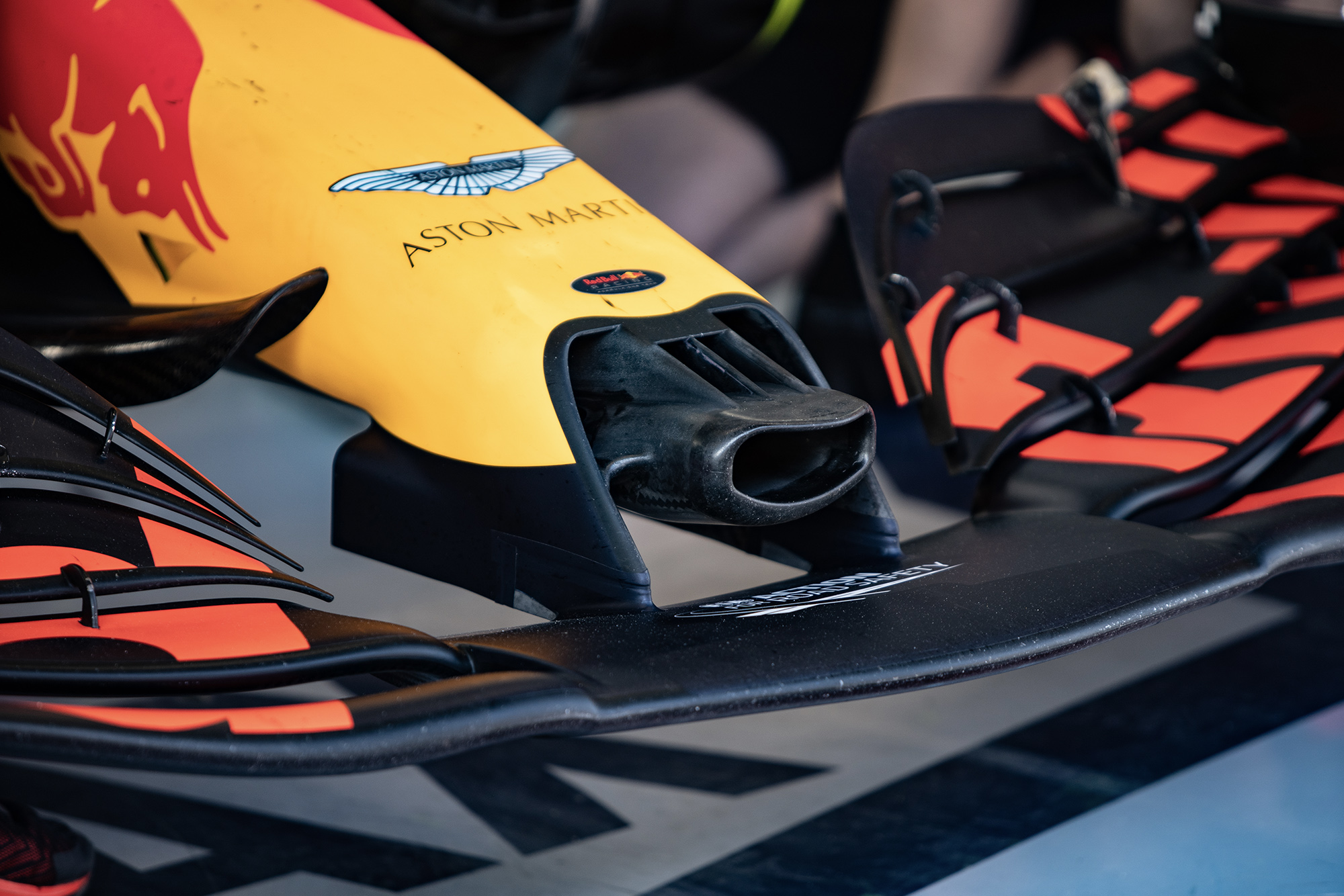 Red Bull’s nose features not only an inlet at its tip, but also small NACA ducts along the flanks

The start of testing for 2020 did not reveal any ground-breaking innovation, at least not on the surface. However, one area with plenty of detail development was the noses of the cars. Fat, thin, with or without ducts, there is a huge variation across the grid. At what could be termed the simple (at least aesthetically) end of the spectrum, you have Mercedes, with its wide, slightly flattened nose, that narrows and blends into a cape that sits behind the front wing supports.

At the other end, is the Red Bull, where the nose is replete with a host of ducts at the front, with further inlets along its sides. In between there are numerous variations on a theme, though it would be fair to say the majority of teams employ some form of ducted nose, generally referred to as an S-Duct.

An S-Duct’s role, in very simple terms, is to move air from the underside of the nose to the upper surface, in order to help better control the flow under and around the nose of the car. This is an area that is of considerable importance to the Y250 vortex that flows from the front wing to the floor. By siphoning off some of the turbulent air under the nose, the energy of the air in these flows can be maintained, helping the all-powerful front floor section to work harder, thus increasing downforce.

The incorporation of such ducts is not without its challenges, the front of the car is full of dampers and other suspension components and the nose itself must be able to pass the mandatory crash tests. This is harder to achieve with a tube wending its way through the structure. However, as such ducts have proliferated across the grid, there is clearly benefit to be had.