With Formula 1 teams still suspicious of a gaping loophole, the oil burn debate rages on 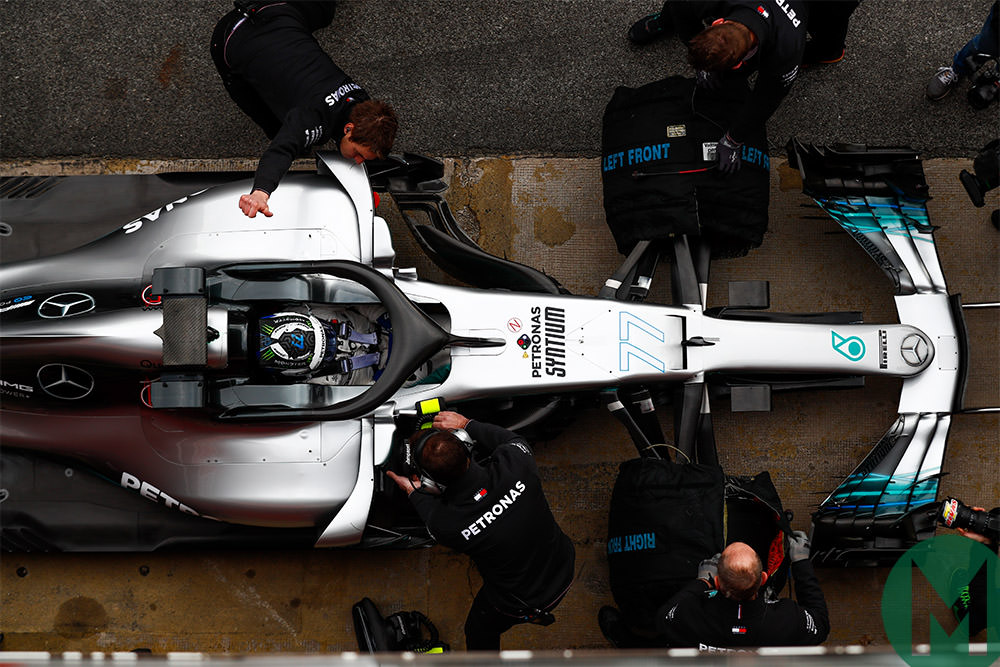 “We’d like to see the [oil burn] rules go further because it still doesn’t deal with qualifying. It contains the race but still, there are windows of opportunity in qualifying which we’d like to see further closed down. Hopefully that will have an effect in creating engine convergence.”

Those were the words of Christian Horner on Monday and it’s easy to see the motivation of his position on this. The practice of oil burning and how it might be used to give power-boosting qualifying engine modes may well be the determining detail of who wins any given race this year. Daniel Ricciardo’s highly promising pace on the first day of testing – he headed the field ahead of Mercedes and Ferrari in the new Red Bull RB14 – suggests the team could be genuine victory contenders from day one.

Amid rumours that both Mercedes and Ferrari have cracked 1000bhp on their dynos, the performance of the Renault motor in the back of the Red Bull is obviously a concern. Just as in the last three years, it’s clearly good enough to help Red Bull run a competitive race pace and for the first time this year it has some sort of qualifying mode available. But that jump is not anything like that being achieved last year by Ferrari, and, particularly, Mercedes. Clearly Horner suspects that difference is being achieved by oil burning which, though further restricted this year, is still possible, especially in qualifying. Oil burning brings an advantage in a fuel flow limited engine formula. The fuel flow cannot exceed an instantaneous rate of 100kg/hour and so beyond a certain threshold (typically around 11,000rpm) extra revs will not bring any further power. But if in addition to the fuel you can feed the combustion chamber something else with burnable calories – such as oil – then you get around that limitation.

The relevant oil burning 2018 rule changes are: Active valves in the crankcase that could be used to increase the pressure and force the oil into the combustion chambers are now specifically banned.  The maximum permitted oil loss from the beginning of the race to the end has been reduced from 0.9 litres/100km to 0.6l. Obviously, any engine will use some oil in its normal operation so the permitted usage number cannot be so low as to prevent the engine being adequately lubricated – but judging where that cut-off is that will allow reliable operation but leave nothing left over to feed combustion has been an ad-hoc process by the rule makers. It was reduced from 1.2 litres to 0.9l from Monza last year and so the permitted usage is now only half that of this time last year.

However, the maximum consumption applies only for the race. Because fluids can be replenished between qualifying and race, there’s nothing to stop teams using any amount of oil for combustion in qualifying for a performance boost. Although the FIA considers any oil burning to be contrary to the regulations, there’s no way of proving how much – if any – oil was used in the combustion chamber during any given lap. Furthermore, although crankcase valves can no longer be used there will still be pressure changes in the crankshaft just in normal running when the driver lifts off, and goes back on, the throttle. These could be used to get the required oil into the combustion chamber, just as before, albeit less effectively.

Even under the freer regulations, Renault did not pursue oil burn technology and instead campaigned to have it banned. Horner’s concern is that the experience of Mercedes and Ferrari under the freer oil burn regs of the previous four years will still allow them to derive an advantage beyond Renault’s grasp. This time last year, when the Red Bull RB13 was around 1.5sec off the pace, there were bigger concerns than a 0.1sec boost in engine qualifying performance. But if the RB14 is as quick as it looks, that could be the difference between qualifying on pole or qualifying fifth – and you’re not going to be winning many races starting from fifth.

Of course, it could be that the qualifying/overtaking modes used by Mercedes and Ferrari are no longer anything to do with oil burn and simply derived from better control of the detonation process. It could be that better inherent reliability allows them to be used harder for longer and still last for seven races. But there still remains an obvious oil burn loophole in qualifying so it would be logical to assume that it would be taken advantage of.