F1 team principals have come out in support of sprint races, with Mercedes’ Toto Wolff saying “We need to entertain the people.”

Final agreement could be reached this weekend, according to McLaren, which is likely to involve additional Saturday races ahead of three of this season’s grands prix.

Last month, a meeting of the F1 Commission, made up of teams, the FIA and the promoter, delayed a decision on the proposal to allow teams to look at it in more detail.

Asked about their views during the Bahrain preseason test, team principals indicated their support. 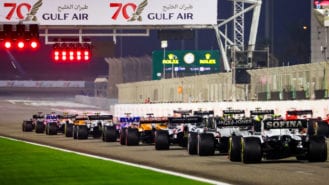 F1 sprint races get positive response but are they a mistake?

Formula 1 has taken a step closer to introducing Saturday sprint races, after teams backed the proposal in a meeting today. The plans are due to be developed and voted…

“From a promoter’s point of view I understand what they’re trying to do it,” said Christian Horner, Red Bull’s team principal. “There’s always a million reasons why not to do something, but I think the concept’s interesting.

“Looking at introducing over three events is reasonably responsible. Why don’t we try it? Let’s give it a go.

“There’s a lot of work going on behind the scenes with the key managers and sporting directors to ensure that the right regulations are in place for it and hopefully it’ll be an interesting spectacle.

“If it’s what the promoters want to do then we’re happy to support.”

The series has long mooted different ideas to spice up the show. Last season reverse races were suggested then shelved after opposition from Mercedes, with Wolff saying that it went against Mercedes’ idea of F1 being a “meritocracy”, and would alter the traditional grand prix weekend format.

“One thing is for sure, having a little race on Saturday will have a large increase in TV audiences”

Others pointed out that Mercedes would be the biggest loser from a reverse grid race, as the team most likely to start last, and that that the team has found negotiating traffic difficult on the rare occasions it started back in the pack.

Speaking in Bahrain, Wolff said that Mercedes remained a “purist” team but conceded that experimentation with the weekend format will likely have a benefit for TV figures.

“Speaking for our team and hearing the opinions of others, we’re probably more on the purist side – we appreciate the 70 year old history Grand Prix on Sunday,” he said.

“But I would agree that one thing is for sure, that by having a little race on Saturday we will have a large increase in audiences.”

Wolff has also overseen Mercedes’ motorsport activities in other series, and gave examples of when he’s witnessed weekend format experimentation have a positive impact. 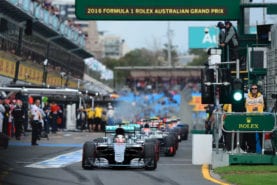 The creative and confusing history of qualifying formats

Formula 1's latest attempt to test a reverse-grid qualifying session looks to have been blocked once more, ending the prospect of starting line-ups being decided by a sprint race, where…

“I’ve seen it in DTM that we were almost able to double the TV audiences with a second [weekend] race.

“I think [it could be successful] if done in a responsible way, at tracks you can overtake, without putting too much gimmicks to it.

“We should give it a go and then be really honest with ourselves: What was the financial impact, impact on the eyeballs that we were able to generate and what is the show factor?

“As Christian said there are many pros and cons. I think if we all stick our heads together, we can find a solution that is. That is of mutual benefit – Formula 1 is what we do all together and we need to entertain the people.”

McLaren’s Andreas Seidl said the idea also had his support, as long as the sprint race idea does not contradict Wolf’s “meritocracy” idea.

“We are very supportive to give it a go if it doesn’t artificially change the pecking order in Formula 1,” he said.

“I think there’s been some good meetings together with FIA and Formula One in the last weeks to define the details, because the devil is always in the detail.

“I think we’ll come to a final conclusion during this weekend and then it’s down to F1 to actually broadcast what it will look like.”

F1 employed a single-lap qualifying shootout from 2004 to 2005, before moving to a knockout system the following year. This system was tweaked in 2016 to knock out drivers every 90sec, but was dropped after being widely panned.

Martin Brundle pointed out in testing commentary that the F1 weekend format has evolved a great deal since the championship’s inception, saying “just to try wouldn’t be a bad thing.”