If the Circuit de Barcelona-Catalunya was going to be the ultimate test of the success of the 2022 regulations, then it certainly delivered, but it was perhaps reliability that was the unexpected ingredient that spiced up an often dull venue.

In temperatures that climbed above 37C, the title race took another big swing, but in such a fashion that you can feel pretty confident there will be many more to come.

Charles Leclerc’s stunning pole position lap had left him with the early advantage, and his decision to save a set of new soft tyres for the start of the race proved a smart one. Only Lewis Hamilton in fifth started on mediums, with the rest of the field committing to at least two stops by starting on softs.

The championship leader got away cleanly to hold off Max Verstappen into Turn 1, while George Russell swept into third in impressive fashion as he continues to look completely at home fighting at the front.

His team-mate was not enjoying such a good start, thought, as Hamilton’s strategic offset was never seen due to contact at Turn 4. Having attacked Carlos Sainz, Hamilton was on the inside and Kevin Magnussen tried to go round the outside of the Mercedes but appeared too close and the pair touched wheels, sending the Haas bouncing through the gravel and Hamilton limping slowly back to the pits with a puncture.

“I was just on a normal line,” Hamilton said. “I was on the inside and he came out of nowhere and came from behind and hit the side of my car.

“I was 30 seconds behind so I thought if I am going to use a whole engine to drive around in last or out of the top 15 and at some point take a penalty. I thought we may as well save the engine so we can live to fight another day.”

Fortunately for Hamilton, Mercedes ignored his offer to retire the car, because it could see the pace it had.

Russell was able to keep Perez at bay – although Leclerc and Verstappen escaped up the road – and even Sainz was struggling to make inroads before he spun off at Turn 4 and dropped out of the top ten.

That error was matched by Verstappen on lap nine, although he caught the rear and was able to limit the damage to two places as he rejoined behind Russell and his team-mate. A gust of wind was to blame but it set up some thrilling action.

“The first 30 laps were very frustrating after I went off in Turn 4 first of all, which really caught me by surprise as I didn’t feel I was braking later or throwing more speed into the corner but it was very gusty out there today,” Verstappen said.

“One lap it felt more stable then the next lap it felt like you had more oversteer in places, that probably caught me out by surprise, not ideal of course. Then I dropped back behind George and Checo, Checo was so kind to let me by and try and attack George as I think already we were planning to do two different strategies.”

Despite Perez’s generosity, Verstappen could find no way past, as his DRS issue from qualifying reared its head once again. Intermittent usage meant on some laps Verstappen could attack into Turn 1 and others he had no hope, but even when he threatened, the defending champion was thwarted by some stunning defensive driving.

When Russell positioned his car in the middle of the track, Verstappen launched to the inside and looked to have the move done, only to find the Mercedes accelerate around the outside and cut him off into Turn 2. They then ran inches apart through Turn 3 before Russell remained ahead.

“Of course I was a bit frustrated at the time as I couldn’t get him because of DRS issues but the fight itself was really cool,” Verstappen said. “I think that lap where I did go on the inside, then George went round the outside, but then I was on the outside of Turn 3 again was a really cool fight.”

It was a fight that was soon to become for the lead, with Leclerc opening up a 14-second lead only to suddenly lose power out of Turn 9 and be forced into retirement, watching what had seemed a certain victory slip through his fingers.

“Everything was going really, really well, so I think it would have been difficult for them to catch back up because there was already quite a bit of a gap and we had very good degradation,” Leclerc said. “On the soft tyre we could do quite a few more laps compared to them. So overall I think we had this race under control.”

Suddenly the race was there for Red Bull’s taking if it could clear Russell, who was proving a worthy adversary. Perez had caught the back of the lead battle quickly after a later first stop and was unhappy at not having the favour returned by Verstappen as Red Bull told him to hold station, but just one lap after Leclerc retired Verstappen was called into the pits for his second stop early in order to go for a three-stop strategy, releasing Perez to attack.

The Mexican soon cleared Russell into Turn 1 as his DRS was working, and pulled away in the lead. Verstappen set chasing down the Mercedes once again, and this time had such a tyre advantage that Russell made his second stop on lap 36, just as the Red Bull appeared in his mirrors.

Planning a two-stop, Perez was frustrated at Red Bull’s decision to hold him back, as he felt it affected his chances of making the strategy work.

“I only felt that in the first stint when I gave the position to Max that I was told that I was going to get it back,” Perez said. “And when I was on the two-stop I felt like I could have gone through Max and George a bit earlier to try and make the strategy work, but it probably wouldn’t have still been enough.”

Perez’s second stop came a lap after Russell’s in order to protect his lead, effectively switching him to a three-stop but after Verstappen had gained a big advantage. So when Perez was told to let his team-mate through into the lead after the Dutchman’s third stop, he replied: “That’s very unfair. But OK.”

From there it was plain sailing for Verstappen, and Perez could afford a third stop after Russell had completed his set and was a more distant third. But the other Mercedes was carving through the field with remarkable pace, as Hamilton moved into the top eight by halfway and suddenly emerged as a threat for the top four.

“Having seen what it was like back in Jeddah where I started 15th and struggled to get into the top ten, I was thinking this is impossible to get back into the points,” Hamilton said. “But they said no I was on for eighth. I couldn’t understand it and thought they were definitely being super optimistic. But I thought let’s give it everything and see where I come out.”

After his first-lap puncture, Hamilton effectively two-stopped and when he made his final one he was soon up to sixth as he and Sainz reeled in Valtteri Bottas ahead. Bottas was trying a two-stop strategy work but was powerless to defend as Sainz used DRS to help overtake – a common sight that worked well this weekend – and Hamilton then went round the outside of his former team-mate at Turn 3 in a crucial move that kept Sainz in range.

With six laps to go, Hamilton was on the outside again, this time under braking for Turn 1 and swept around Sainz for fourth and to complete a stunning comeback. Or so he thought.

Temperature concerns then forced Mercedes to slow both cars dramatically, and Hamilton gave up the place he’d earned starting the penultimate lap, but he still came home fifth with Russell – who felt Mercedes halved the gap to the frontrunners this weekend – able to hold onto the podium place ahead of Sainz.

“When I was battling with Max, I was managing tyres, the engine was overheating, then trying to go as fast as possible to keep them behind,” Russell said. “You’re juggling so many things.

“And then in the last five, six laps, it was literally just bring it home, get it to the end of a race, because we were right on the limit throughout the whole race. But the team did a great job to not allow us to go over that limit and have to retire the car.”

Despite so many concerns for front-running teams, in the end Leclerc was one of only two retirements along with Zhou Guanyu. Magnussen limped home 17th after his contact with Hamilton – beating Alex Albon who was penalised for exceeding track limits too many times – while the other Haas of Mick Schumacher faded from an excellent start, going from sixth on lap one to finish 14th.

Sixth at the flag went to Bottas ahead of Esteban Ocon, Lando Norris, Fernando Alonso and Yuki Tsunoda, with the Alpine pair showing strong race pace and Tsunoda impressing. It was his third point-scoring finish of the season as team-mate Pierre Gasly picked up a penalty for tapping Lance Stroll into a spin, moving him five points clear of the Frenchman.

That’s one fewer point than Verstappen now leads Leclerc by, although the two could well have been level but for Red Bull’s team orders. And with Leclerc’s earlier pace particularly strong, it’s perhaps understandable Christian Horner’s team wanted to make hay while the sun burned down in Barcelona. 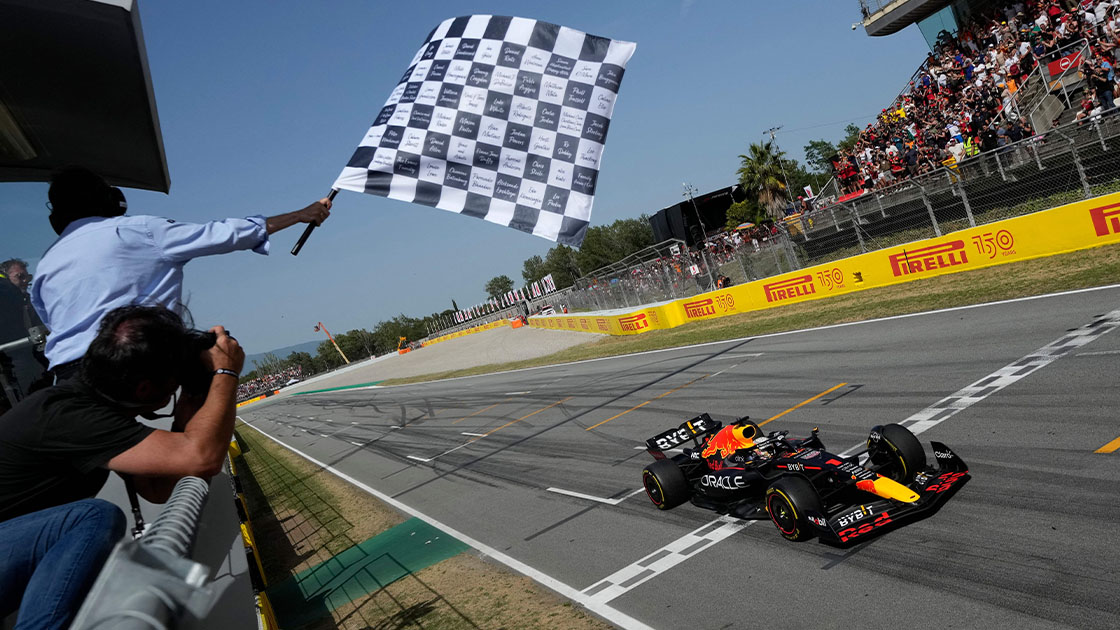