Half an hour – or 20 minutes by crazed taxi – north-northeast of Milan, Monza should by rights be Alfa Romeo country. And so it was for a time, its glorious P2, 8C – aka ‘Monza’ – and P3 models winning Italian Grands Prix at the parkland track during the 1920s and ’30s. Its Alfettas then won in 1950 –  the occasion of the original world championship showdown. 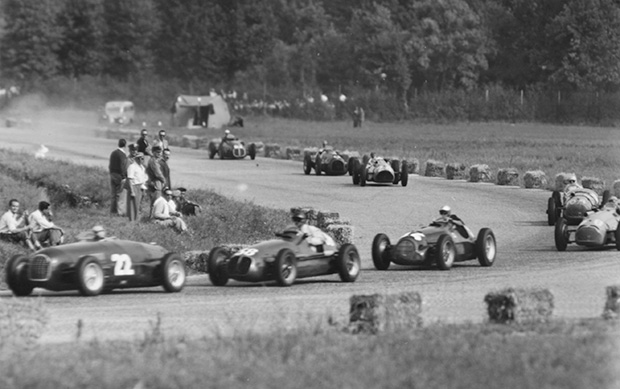 Its had its failures, arguments and disasters, too: Alberto Ascari’s last-lap collision and miffed trudge of 1953; Luigi Musso’s refusal to hand over to champion elect Juan Fangio in ’56; Wolfgang von Trips’ terrifying tumble into the crowd in ’61; and Jean Alesi’s broken gearbox and wheel bearing when leading in ’94 and ’95.

Monza stirs emotion like no other circuit. Phil Hill watched with dismay while team-mate and title rival von Trips dangerously over-tightened his internal spring during practice and pre-race prep in 1961. (Enzo Ferrari, a self-professed ‘agitator of men’, had selected this ticklish moment to unleash the furious speed of Ricardo Rodríguez.) In ’94, Alesi, still wearing his overalls, jumped directly aboard an Alfa 164 and roared at unabated speed to his French Riviera home. An emotional man, fuelled by adulatory adrenalin and launched by sudden, disorientating disappointment, he blindly ignored his private jet parked, ready and waiting, at Malpensa. And could Michael Schumacher, supposedly an unemotional man, have made his retirement-in-victory speech of 2006 at anywhere other than the track where he broke down in tears during a 2000 press conference? No. 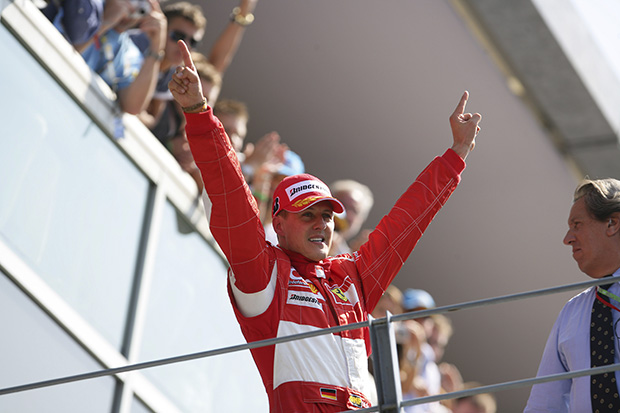 Monza affected Enzo, too. In 1933, his team ran the P3 that Luigi Fagioli used to defeat Tazio Nuvolari: a sweet victory given the latter’s recent turbulent defection to Modenese rival Maserati.

The sour came later that same day when Giuseppe Campari, one of the few to win Enzo’s heart, was killed on the opening lap of the second heat of the Monza GP, held at the venue’s then shallow-banked oval.

A forlorn Scuderia Ferrari had already packed and left when Polish Count Stanislas Czaykowski crashed from the lead of the final and to his death. By which time hospitalised Baconin Borzacchini had succumbed to injuries sustained in the earlier incident. No wonder a harder, cooler Enzo emerged from this end-of-era event. The shades came down and it wouldn’t be long before only practice days at Monza drew him blinking into his adoring public’s gaze. 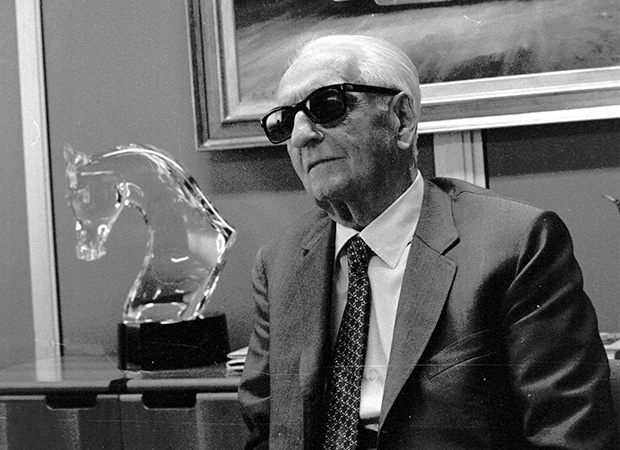 Still, Ascari opened Ferrari’s Italian GP account, in the Alfettas’ absence, in 1949. He won again in ’51 – defeating the Alfettas already wounded by Froilán González at Silverstone – and again in ’52.

Hill, who always went well here, in 1960 scored the valedictory victory for a front-engined GP car, and in ’61 stayed calm to become perhaps the most reflective world champion. John Surtees reaffirmed his title push in ’64, something that was denied him by team politics in ’66, when bit-parters Ludovico Scarfiotti and Mike Parkes carved it up between them instead.

Clay Regazzoni won as a ‘young shaver’ in ’70 – he was 31 and a day, albeit in his first F1 season – and again, complete with luxuriant GT Man moustache, in ’75. Gilles Villeneuve, blithely convinced that his time would come, willingly towed the party line in ’79 as Jody Scheckter’s faithful wingman. 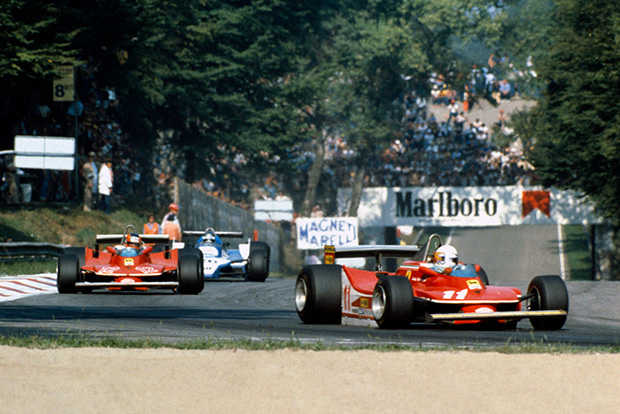 Enzo’s ‘presence’ had been ever-present. The undertow of his mortal demise, however, dragged his team down. Indeed Niki Lauda, briefly in an advisory role, reckoned its history was Ferrari’s greatest weakness. The Schumacher Era eventually was able to run, almost roughshod, over it, so great was the sum of its impressive parts. And Monza’s track invasions lost their spontaneity so regularly did victory come: 1996, ’98, 2000, from ’02-’04 and ’06.

The new iteration of Ferrari is not so gilded or armour-plated. Red Bull’s recent theatrical vacillation dented it with alarming ease, and Fernando Alonso and Luca di Montezemolo sparred verbally before assurances were given that all was well between them – when clearly it is not. In fact, I would go so far as to say that their relationship stands on the brink this weekend. 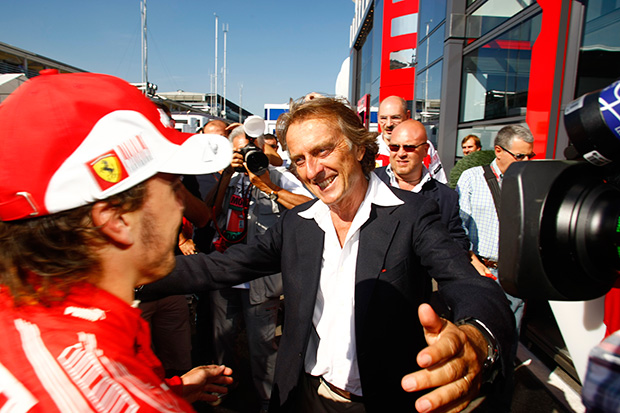 In 2010, the Spaniard, in the midst of a sequence that should have won him the title, delivered a Grand Slam at Monza: pole, victory and fastest lap; only the best time of Q1 eluded him. His was a Schumacher-esque performance, staying out a lap longer to jump the McLaren of erstwhile leader Jenson Button.

He needs a repeat of this on Sunday if wishes to keep alive his hopes of a third world championship.

But even then post-Enzo history – it exists! – would stand against him. Between 1990 and 2010, only Senna and Schumacher – the latter twice, in 2000 and ’03 – became world champion as a result of campaigns that included victory at Monza. 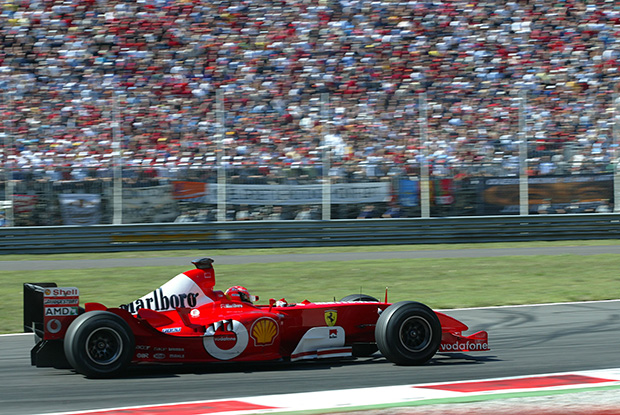 They were joined in 2011 by you-know-who. Fresh-faced Sebastian Vettel is too busy making it to be weighed down by history. And only in the undertow of his and/or Adrian Newey’s eventual departure will fizzy Red Bull come to know how difficult it is to be ‘Ferrari’.

Monza’s tingling atmosphere is both good and bad, dappled light and shade by its trees and the history they have overseen. If there is any room remaining for ghosts – or magic – in F1’s increasingly rational, metronomic machine, it’s lies here: where Enzo and Alonso ‘meet’.