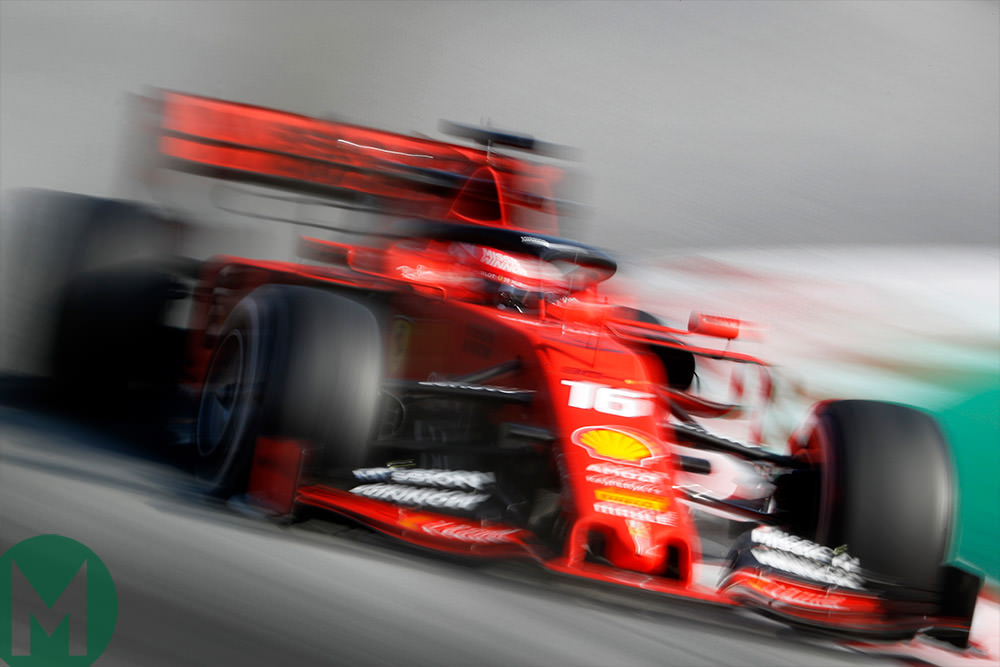 Ferrari returned to the top of 2019 Formula 1 preseason testing at Barcelona, as Charles Leclerc comfortably set today’s pace with the fastest time of testing so far.

Leclerc had already turned heads in the morning’s running with an impressive 1min 17.253sec set on harder compound C2 Pirellis, which was the third best time at that point.

Later in the morning Leclerc moved to first place and then set a series of lap times on the softest C5 tyres, each improving on his previous best. His eventual mark was a 1min 16.231sec set just before lunch. It remained more than half a second clear of the rest for the day’s remainder.

Ferrari’s day was slightly spoiled though by Leclerc causing a red flag, stopping on track with around 20 minutes to go.

Yesterday Ferrari lost several hours of running after Vettel crashed in the morning, something the team today attributed to a damaged wheel rim.

Alexander Albon’s Toro Rosso and Lando Norris’ McLaren were next in the final order, the pair having spent much of the morning swapping times at the top. Albon ended the day second overall with a 1min 16.882sec and was Norris third with a 1min 17.084sec. Both set their times on C5 rubber.

In was Red Bull’s turn today to lose running time after an accident, with its day ending in mid-afternoon when Pierre Gasly crashed heavily at Turn Nine, emerging unhurt. Gasly finished the day fourth in the order, with a 1min 17.091sec best set on C5 tyres.

The Renault team once again split its day’s running between its two drivers, and they ended the day fifth and sixth with Daniel Ricciardo ahead. Ricciardo set a 1min 17.204sec while his team-mate Nico Hülkenberg set a 1min 17.496sec. They also were both on C5 Pirellis.

Lance Stroll’s Racing Point was next up with a 1m 17.556sec, another on C5 tyres. Stroll also caused a red flag during the afternoon by grinding to a halt on the circuit with an hour of the day remaining.

Antonio Giovinazzi was eighth in the final order for Alfa Romeo with a 1min 17.639sec best, again on C5 rubber.

Haas also lost a lot of running time, Romain Grosjean not appearing in the afternoon session until well into the final hour due to an exhaust issue. Kevin Magnussen drove the car in the morning and his 1min 18.199sec set on C3 tyres got him 12th in the final order while a late Grosjean effort got him ninth with a 1min 17.854sec on C4 rubber.

Mercedes once again split it running between its two drivers and did not achieve pacesetting lap times. Lewis Hamilton’s 1min 18.097sec best in the morning was however set on harder C2 tyres and was good enough for him to end the day ninth of the 13 runners.

Hamilton also topped the morning’s mileage charts with 85 laps completed plus his lap times during his long runs impressed in their consistency. Valtteri Bottas took over the car in the afternoon and ended the day 13th and last with a 1min 18.862sec set on C3 Pirellis.

George Russell’s Williams was between the Mercedes pair, ending up 11th with a 1min 18.130sec set on C5 tyres.