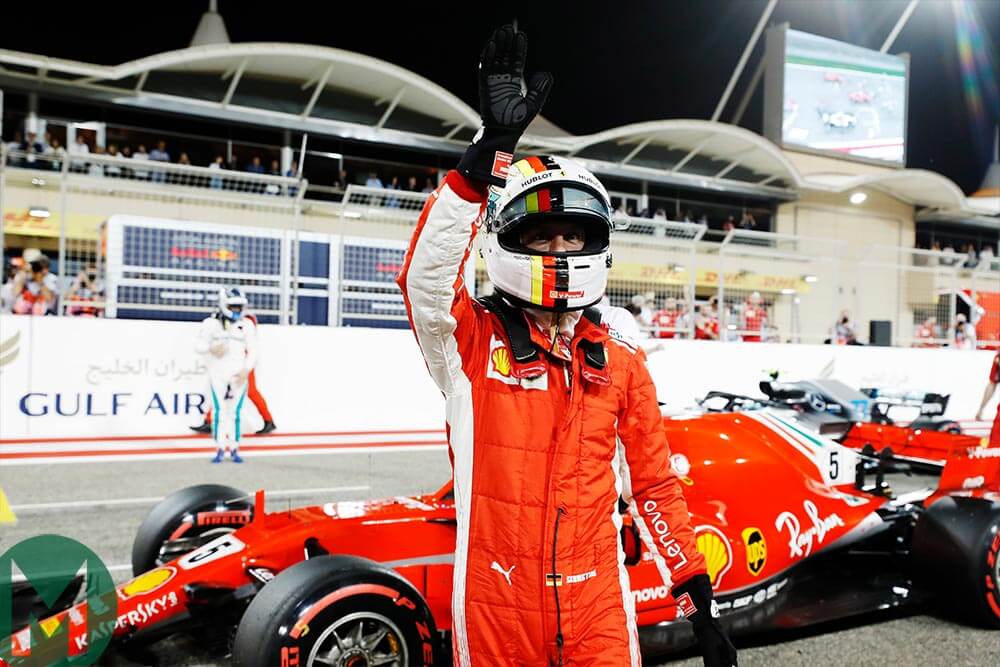 Ferrari locked out the front row for the Formula 1 Bahrain Grand Prix for the first time since 2006 as Sebastian Vettel took pole position ahead of Kimi Räikkönen, while Lewis Hamilton will start ninth due to a five-place grid penalty.

Räikkönen set the fastest time early on in Q3 with an effort of 1min28.101sec, but his team-mate beat that with a final effort of 1min 27.958sec and the Finn, caught in traffic, couldn’t improve.

Hamilton sat in third after his first Q3 effort but Valtteri Bottas pipped him to third with a final effort of 1min 28.124sec. Daniel Ricciardo finished fifth, under four tenths off the pace.

It was Pierre Gasly who starred in qualifying, however, as he took his Toro Rosso to sixth, meaning that a Honda-powered car has qualified in the top-10 at Sakhir since Jenson Button qualified ninth in 2008. Gasly will, after Hamilton’s penalty is applied, therefore start from fifth.

A flurry of flying efforts from the frontrunners did little to change matters in Q2 though Bottas pipped Ricciardo for fourth place late on. Hamilton emerged on supersofts but didn’t improve on his Q2 time.

The Renaults, led by Hülkenberg, finished sixth and seventh in the second session while Gasly and Ocon rounded out the top 10 at the expense of Brendon Hartley who missed out on Q3 by less than a tenth of a second.

Also eliminated in the second qualifying session was Sergio Pérez with a suspected ERS issue, both McLarens and Max Verstappen, who failed to set a lap after crashing out in Q1.

This (13th) was Fernando Alonso’s best qualifying performance in Bahrain since he left Ferrari in 2014.

Though he was fourth in Q1, Verstappen brought out a red flag after a spin exiting Turn 2, which left him in the barriers. That ended his qualifying session early and he will start the race towards the back, subject to any grid penalties.

Facing the drop zone was Alonso, whose time of 1min 30.530sec – exactly the same as 16th place Romain Grosjean’s – took him into Q2 as the McLaren crossed the line before the Haas.

Grosjean’s first flying effort was hampered by a lock-up going into Turn 1 and his final effort was ruined as he ran wide on the last corner. He will start ahead of Marcus Ericsson (17th) while Leclerc, who spun on his final effort, and a frustrated Lance Stroll provisionally fill out the back row.