The FIA has dismissed comments from drivers criticising the Aston Martin safety car, saying that speed is a ‘secondary consideration’.

Following the Australian Grand Prix, Max Verstappen was highly vocal in his disapproval of the Aston Martin safety car, calling it “a turtle”.

Both he and eventual race winner Charles Leclerc said that maintaining tyre temperature was difficult with the low speeds seen at Albert Park, a problem the former insists is not the case when the alternative Mercedes-AMG GT safety car heads the field.

“It’s just that there’s so little grip because the safety car was driving so slowly,” Verstappen said.

“It was like a turtle. Unbelievable. With that car, to drive 140km/h on the back straight where that was not a damaged car anymore, I don’t understand why we have to drive so slowly. We have to investigate.

“For sure, the Mercedes safety car is faster because of the extra aero. The Aston Martin is really slow. It definitely needs more grip because our tyres were stone cold.

“We went into the last corner, and I could see Charles understeering, so I’m like ‘OK I’ll back off a bit more and get a better line’. But it’s pretty terrible, the way we are driving behind the safety car at the moment.” 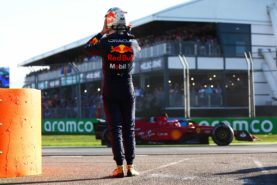 Charles Leclerc’s impressive domination of the Australian Grand Prix – he achieved the grand chelem of pole, start-to-finish in the lead and fastest lap – and Max Verstappen’s retirement from…

Aston Martin provides a Vantage, altered to be more track-focused with changes to its suspension and chassis, as well as the addition of a rear spoiler.

The Australian Grand Prix was the first appearance for the Vantage this season with another 11 appearances set to follow at various rounds.

The FIA has released its own statement defending the Vantage safety car and said the number one priority was safety over speed.

“In light of recent comments regarding the pace of the safety car, the FIA would like to reiterate that the primary function of the safety car is, of course, not outright speed, but the safety of the drivers, marshals and officials.

“The safety car procedures take into account multiple objectives, depending upon the incident in question, including the requirement to ‘bunch up’ the field, negotiate an incident recover or debris on track in a safe manner and adjust the pace depending on recovery activities that may be ongoing in a different part of the track.

“The speed of the safety car is therefore generally dictated by race control, and not limited by the capabilities of the safety cars, which are bespoke high-performnace vehicles prepared by two of the world’s top manufacturers equipped to deal with changeable track conditions at all times and driven by a hugely experienced and capable driver and co-driver.

“The impact of the speed of the safety car on the performance of the cars following is a secondary consideration, as the impact is equal amongst all competitors who, as is always the case, are responsible for driving in a safe manner at all times according to the conditions of their car and the circuit.”