But the Miami-born Brazilian isn’t guaranteed the seat for the rest of the season, with Haas set to make his decision on the team’s second driver on Wednesday after considering “several” options.

The American team announced on Saturday morning that it had terminated both the contract of its Russian driver and the title sponsorship of his father Dmitri’s Uralkali firm.

The latter has close links to Russian president Vladimir Putin and Haas decided that the relationship was untenable after the invasion of Ukraine. This has left it scrambling to find someone to occupy its second berth less than two weeks before the 2022 F1 season starts.

2017 F3.5 champion Fittipaldi is the grandson of two-time F1 champion Emerson. He drove two races at the end of 2020 for the team substituting for Romain Grosjean, and has been called up by the team again. 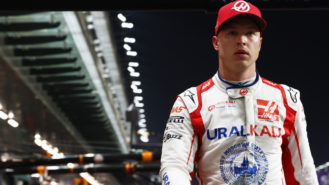 When the International Olympic Committee came out and told sporting federations it recommended athletes and teams from Russia and Belarus are banned from international competition, it was a big statement.…

“We’re in the process of looking at several candidates, we’ll see who is available and what we have to deal with, but we’ll have somebody by Wednesday,” Haas told the Associated Press at the Las Vegas NASCAR round yesterday. “Pietro will definitely be in it, that’s what he’s for, he’s the test driver.

“I think we’re looking. I think we’d obviously like to get someone with a bit more actual experience. We just have to see what’s available.”

Partly on that basis, it is thought former Alfa Romeo driver and current Ferrari Academy driver Antonio Giovinazzi is a front-runner for the seat, along with Aston Martin reserve Nico Hülkenberg and Fittipaldi.

The former will be present at a number of races this year as reserve driver for Ferrari, with Haas using Scuderia engines and also having a close technical relationship with the Italian team.

Haas also elaborated on the reasons behind dropping Mazepin and his Uralkali sponsorship, emphasising that the team is still in decent financial health.

“Haas has always been the major, primary sponsor, I don’t know why people said it became a Russian team. Haas Automation was always on the car. We’re fine. We’d like more money, of course, but we’re fine. This just gives us a bigger negative number.”