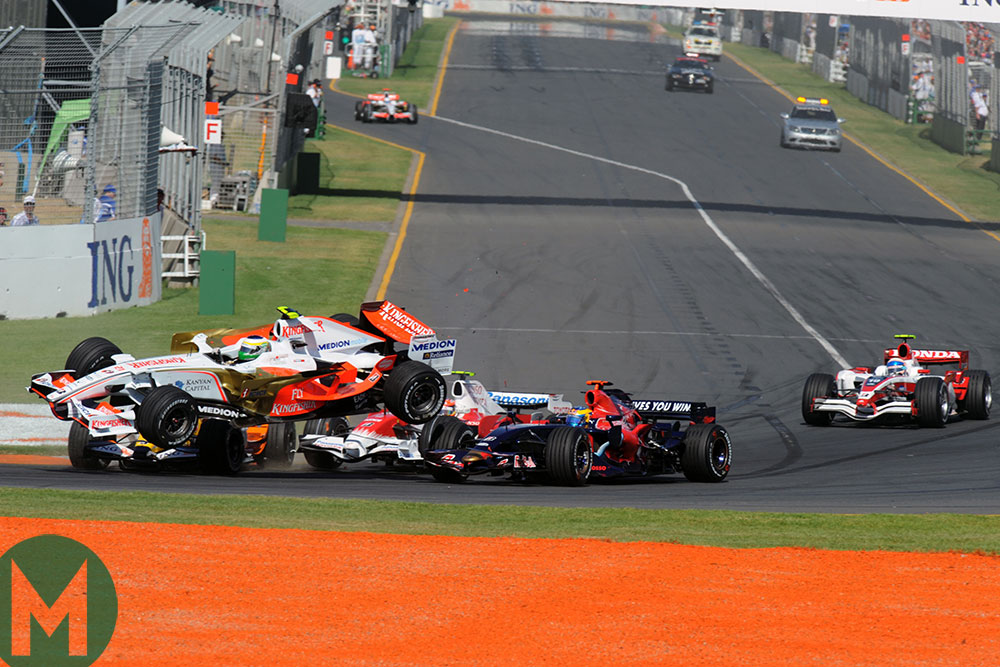 Indian billionaire Vijay Mallya buys Spyker with Dutch businessman Michiel Mol for £61 million. This is the team’s third name change in as many years: Jordan was sold to Midland F1 in 2005 while Midland was bought by the Dutch car manufacturer for £51 million hallway through 2006. Force India’s debut race at Melbourne in 2008 ends in a double retirement for the VJM01 and the team manages a best finish of 10th at the Spanish GP.

Mallya takes over as team principal when Colin Kolles and chief technical officer Mike Gascoyne leave. James Key and Mark Smith head up the technical side. The engine supply deal with Ferrari ends a year early as Mallya favours switch to Mercedes engines and gearboxes and McLaren KERS system; Force India finishes ninth, ahead of Toro Rosso in constructors’ championship with Fisichella giving the team its first pole in Belgium.

Giancarlo Fisichella leaves, as do technical boss Key (for Sauber mid-season), chief designer Lewis Butler and commercial director Ian Phillips. Force India plays a lonely midfield role and misses out on sixth to Williams but finishes ahead of Sauber and Toro Rosso. Mallya wins a $4.8 million case against former sponsor Etihad as it jumped ship to Ferrari mid-contract.

Sahara India Pariwar group purchases a 42.5 per cent stake (valued at $100 million) in the team, giving it co-ownership with Mallya. The team is renamed Sahara Force India. Paul di Resta partners Adrian Sutil in the VJM04, created under new tech boss Andrew Green. The squad finishes sixth, four points behind Renault. Mallya winds up the domestic wing of his airline, Kingfisher. The airline reveals that it is “drowning in high interest debt” in late 2011.

Kingfisher Airlines’ bank accounts are frozen over unpaid tax in India, and it is revealed that it accumulated losses of over $1 billion. Nico Hülkenberg partners Paul di Resta as Sutil departs. Sutil is later charged with assaulting a Lotus executive at a Shanghai nightclub. Amid protests in Bahrain, the crew attempts to pull out of the race – drawing criticism from F1 chief Bernie Ecclestone – but competes anyway. Force India beats Williams to seventh, finishing behind Sauber in the championship.

Mallya’s airline folds, and loses international and domestic flying slots in February. Sutil returns in place of Hülkenberg (who leaves for Sauber) in the VJM06. A strong start to the season, with a high of fourth in Bahrain, fades, but Force India manages a sixth-place finish in the championship, 45 points behind McLaren. 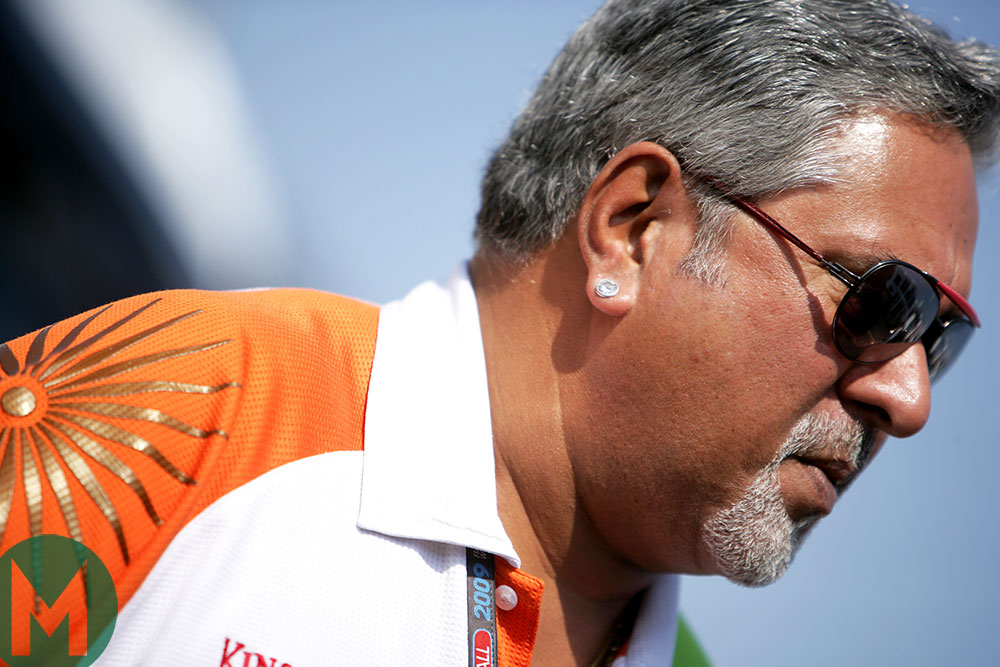 The outfit finishes sixth, again behind McLaren. Sahara chairman Subrata Roy is arrested in India after an ongoing investigation into fraud and money laundering. Force India also blocks a comeback by foundered team Marussia, which requested unanimous approval to use its 2014 car for the 2015 season.

Force India is reported to be likely to miss all three pre-season tests as important parts suppliers have not been paid, and it emerges that Force India was on the verge of financial collapse. However, Pérez takes a podium in Russia as the VJM08 proves reliable and rapid, and the team finishes fifth in the championship. Force India joins Sauber in complaining to the European Union about F1’s competition rules, specifically criticising the Strategy Group’s inclusion of only Mercedes, Ferrari, Red Bull and Williams and revenue distribution weighted towards the frontrunning teams.

The Indian government issues a warrant for Mallya’s arrest, on charges of money-laundering in March, but he remains in London. Sahara looks to sell its stake in Force India, but fails to find a buyer. Hülkenberg and Pérez secure a fourth-place finish in the 2016 constructors’ championship.

The 2017 VJM10 sports a pink livery (after its unveiling in black and silver) as BWT sponsorship is secured, and Mallya praises the team’s “solid commercial performance”. Fourth-place is again earned in 2017 with Esteban Ocon having replaced Renault-bound Hülkenberg. Mallya, however, is arrested in London on behalf of Indian authorities. He is found guilty of contempt of court in May, and fails to appear in court, calling it a “witch hunt”. Mallya is arrested and released on bail in London in October 2017.

Mallya is ordered to pay a fine and dues to 17 Indian banks in June. Reports and rumours surface that Force India is to change its name, dropping the “India” moniker to secure further sponsorship. British drinks firm Rich Energy surfaces as a potential buyer, but nothing changes and the pink BWT-liveried car is unveiled as normal in preseason testing. Mallya hands the managing director role to his son, Siddarth. In July, a group of creditors, including Pérez, initiate legal action against Force India before the Hungarian Grand Prix. The team is put into administration, with control over its sale taken away from Mallya and handed to FRP Advisory, which handled Manor F1’s winding up.