Formula 1 should return to V8 engines while the series decides on which power unit it will use in the future, Bernie Ecclestone has said.

Teams are currently discussing plans to freeze development of the current hybrid power units from 2022, until a new set of engine regulations are introduced mid-decade.

In an interview with Motor Sport Magazine, Ecclestone said that it would be cheaper and more popular to revert to the crowd-pleasing V8s from the pre-hybrid era

“I’ll be in trouble for this, but let’s dig out all the old normally aspirated engines,” he said in the February 2021 issue. “Everybody’s got them, the costs go right down, the noise will be back, and we can use them for five years while we sort out an engine for the future.”

V8 cars last raced in 2013, after which they were replaced by new 1.6-litre turbocharged units with hybrid assistance. The move was championed, particularly by Renault, as hybrid technology became more common in road cars. Ecclestone opposed it from the start. 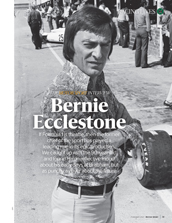 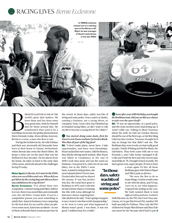 Bernie Ecclestone: from building F1 to its future — The Motor Sport Interview

Bernie Ecclestone is one of the world’s great deal makers. He loves them and has done some very good ones, both for himself and for those around him. He transformed…

At the end of last year, Fernando Alonso was reunited with his 2005 title-winning Renault in Abu Dhabi. The sound of the screaming V10 drew crowds of mechanics to the pitwall to watch the demonstration laps.

Alonso himself said that technology moves on and the sport cannot be stuck “in the old days” but Ecclestone says that F1 should stop trying to follow the direction of the road car industry.

“Formula 1 doesn’t have to be relevant to the car industry,” he says, “People forget, Formula 1 is in the entertainment business and when you stop entertaining you haven’t got a business.

“There’s going to be a lot of changes [in the world]. Everyone will have electric cars, the politicians will see to that, you won’t be able to take a petrol car into a city. People will say, ‘Hang about, all these F1 cars charging round – why aren’t they electric?’ and the manufacturers are going to stop making petrol or diesel cars within a few years.

“Honda is going; Red Bull will take the engine but that will only work if the others agree to freeze, otherwise they’ll just go on spending God knows what to stay ahead. Let’s get rid of these bloody silly engines they have now. The people in the grandstands aren’t interested in how super-efficient they are, how much fuel they use, how powerful they are. Max [Mosley] said the noise doesn’t matter but I think it does, always have done.”

Manufacturers may not agree. Renault, Mercedes and Ferrari have committed to the hybrid concept, and use their racing involvement to help sell road car ranges that feature a rising number of hybrid and (in the case of Renault and Mercedes) electric models.

The element of ‘electrification’ in the new lower-cost LMDh sports car regulations has also cited by Audi and Porsche as a reason to return to top-level sports car racing, where they previously raced higher-cost hybrids.