Ferrari secures a 1-2 in Sunday morning qualifying for the F1 Japanese Grand Prix, with Sebastian Vettel ahead of team-mate Leclerc 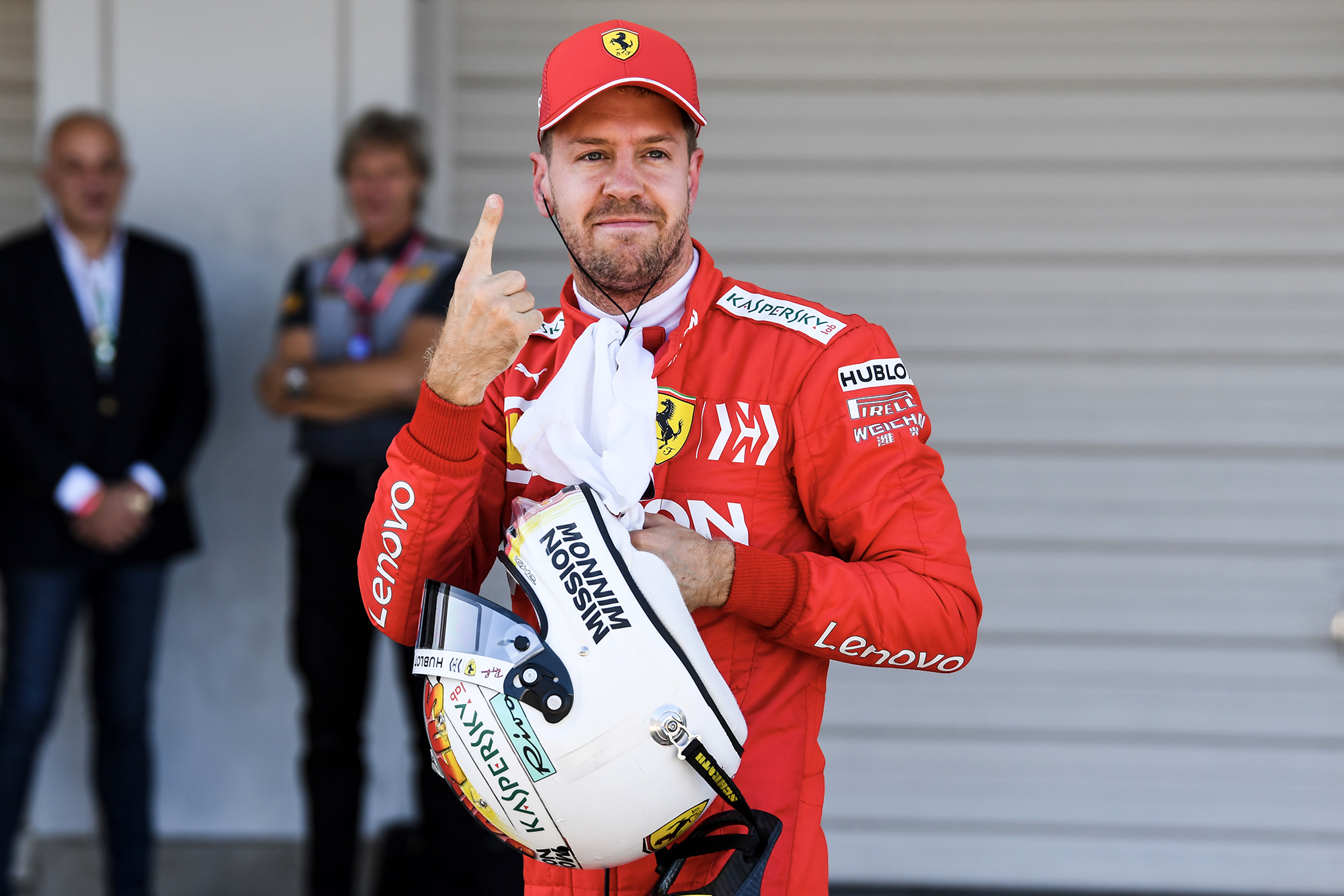 There is a lot more to Ferrari’s 2019 resurgence than pure grunt. If anyone still had any doubts that Maranello had solved the innate understeer problems that plagued the SF90 in the first half of the season, Suzuka dispelled them.

You can’t go two tenths quicker than a car as good as the Mercedes through Suzuka’s sector one, as Sebastian Vettel did, if you have understeer. Yes, sector one includes the front straight, but it ends just before the first Degner after the most awesome series of high-speed sweepers – read Mercedes territory – on the calendar.

Even Leclerc, shooting for his fifth consecutive pole and 10th successive outqualification of his four-time world champion team-mate, could not match Vettel through there.

Throughout the year, Mattia Binotto has referred to the problems of managing two talents like Vettel and Leclerc as ‘a luxury.’ You tended to dismiss that as pure PR-speak until you understand the extent to which they are pushing one another, and hence raising Ferrari’s bar.

On Friday in Japan it looked as if Mercedes was going to have the upper hand. You can’t normally read too much into FP2 but, with the typhoon wiping out Saturday track activity and FP3, the FIA declared that should it prove impossible to run qualifying on race morning, then FP2 would set the grid order. With that in mind, and FP3’s extra tyre allocation, you therefore figured that a Mercedes 1-2 in Friday’s second session was a better barometer of one-lap pace than normal.

Even so, some were convinced Ferrari had not turned their engines up as much as they might have, and qualifying bore that out.

This time Vettel had his man for pace. And he knew it.

On top of that, Vettel, on his favourite track, has to be given full credit for being right on top of his game and fighting back against the interloper from within.

Some fans on forums (less sensible ones!) had taken Leclerc to task for his Sochi radio messages, somewhat unfairly. He’d done his bit in providing the tow and left the door wide open for Vettel into Turn One, and then Sebastian had not let him re-pass which, Charles thought, was their pre-race agreement.

Basically, Leclerc got played. Vettel, cannily, for team and public consumption complained over the radio that Leclerc “needed to be closer” or they would lose too much time. But, of course, you can’t follow that close for any length of time without your tyres wearing, which Leclerc’s left rear did, and your temperatures becoming marginal. Seb knew that well enough.

So, for the second successive GP, Leclerc lost a race he should have won and was deeply hacked off. But in Seb’s mind no doubt, he got stitched up by Charles at Monza, and undercutting ahead of him in Singapore was unintended by the team so tough luck. In Sochi therefore, he got even.

Had Vettel done anything wrong? The fact that he was unwilling to engage the media about it post-race told you all you needed to know… 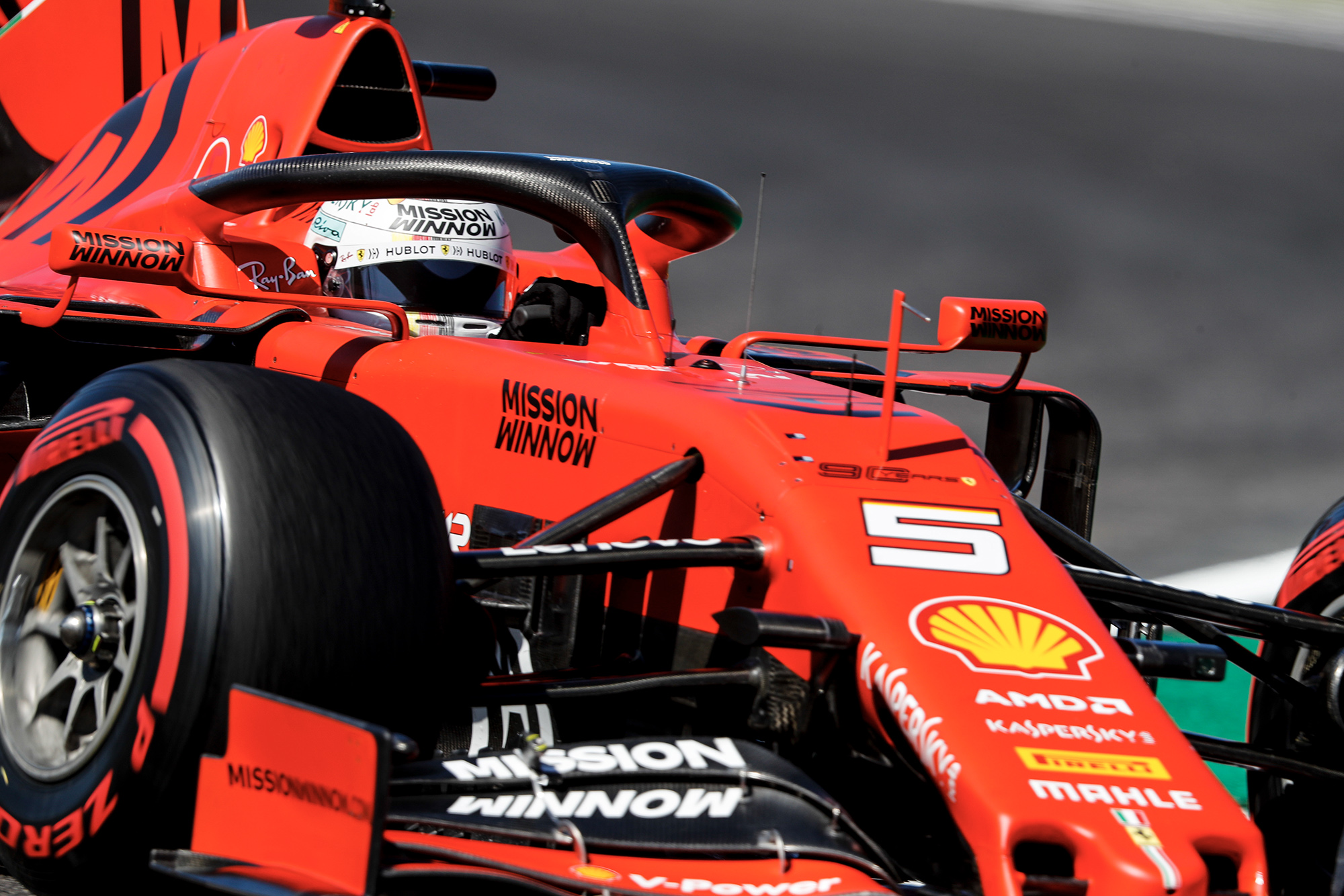 Vettel had the measure of Leclerc in qualifying Photo: Motorsport Images

The pair came to Suzuka after both had held individual meetings with Binotto in Maranello and the approach was conciliatory. “The priority is to work as a team,” said Vettel. “It could have been better but we spoke about it and are trying to look forward in the future.”

“We’ve had discussions and it (the strategy) was not completely clear to both drivers,” Leclerc added. “We need to make it clearer. But I’ve talked to Seb and everything is fine. It was a much bigger deal outside than inside.” Which, it has to be said, is not the way things appeared in Russia on Sunday evening…

Binotto, meanwhile, explained that leaving Vettel out longer in Sochi was not to allow Leclerc to undercut him but to protect against a safety car that would have handed Hamilton and Mercedes the lead. A convenient truth.

Simulators are all well and good, but Suzuka is Suzuka. A track that requires enormous confidence and commitment

But this time Vettel had his man for pace. And he knew it. “That was a good lap,” he announced after his first Q3 run, before going even quicker when Leclerc got within a couple of hundredths.

Vettel had sector one absolutely nailed. “We had a headwind in the Esses and I think I only used the brakes in Turn 2.” It looked that way too! His margin over Leclerc across the entire lap was just under two-tenths.

Leclerc had no complaints as Ferrari took its first Suzuka pole since Felipe Massa in 2006 and, perhaps crucially, locked out the front row: “Credit to Seb, he did a fantastic lap. I was struggling a bit and I’m not happy with some mistakes in the last sector. Pole wasn’t possible today and I think Mercedes will also be quick in the race.”

The three-pointed star has owned Suzuka since the start of the hybrid era but is now faced with trying to win the race from the second row – something that has never been done at Suzuka.

You’d imagine that a track like Suzuka was made for Lewis Hamilton and his pole lap in 2018 was truly special, but he admits that sometimes it trips him up a bit and this time it was Valtteri Bottas who took the honours as quickest Mercedes driver by just a hundredth of a second, the Finn only failing to split the Ferraris by five hundredths.

Mercedes came to Japan with a significant aero upgrade in the barge board area. “It worked well, the new aero bits felt better and I got everything out of the car, but it still wasn’t enough,” Valtteri grimaced.

Vettel apart, the stand-out lap of qualifying came from Alexander Albon, who matched Max Verstappen’s 1min 27.851sec down to the last thousandth. 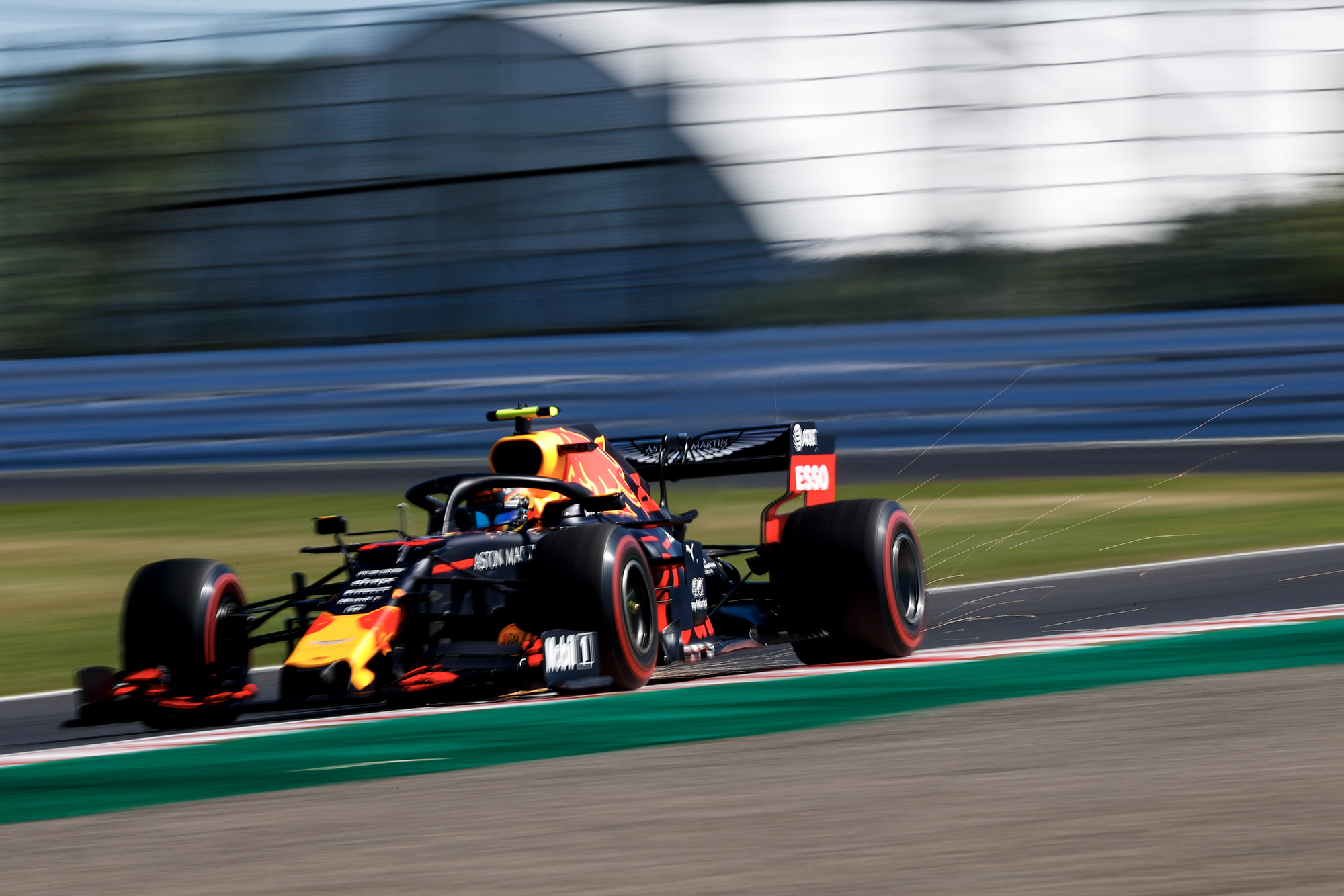 Simulators are all well and good, but Suzuka is Suzuka. A track that requires enormous confidence and commitment to produce a lap time. To go there for the first time and match Max Verstappen is a truly special performance. You’d imagine that if there was any doubt at all about Albon’s name on the 2020 Red Bull team sheet, it should now be gone. The disappointment for Red Bull is that even with a Spec 4 Honda and Esso’s latest fuel brew, aimed at improved drivability, there was still a half-second gap to the Mercs.

In the battle for best-of-the-rest in the constructors’ championship, Suzuka looks like a good opportunity for McLaren to extend its advantage. Almost another half second down on the Red Bulls, Carlos Sainz put one across Lando Norris for the fourth consecutive race and shaded the talented rookie by 0.16sec.

“I keep making small mistakes at the end of the lap, which loses me a place, usually to Carlos!” Norris lamented. 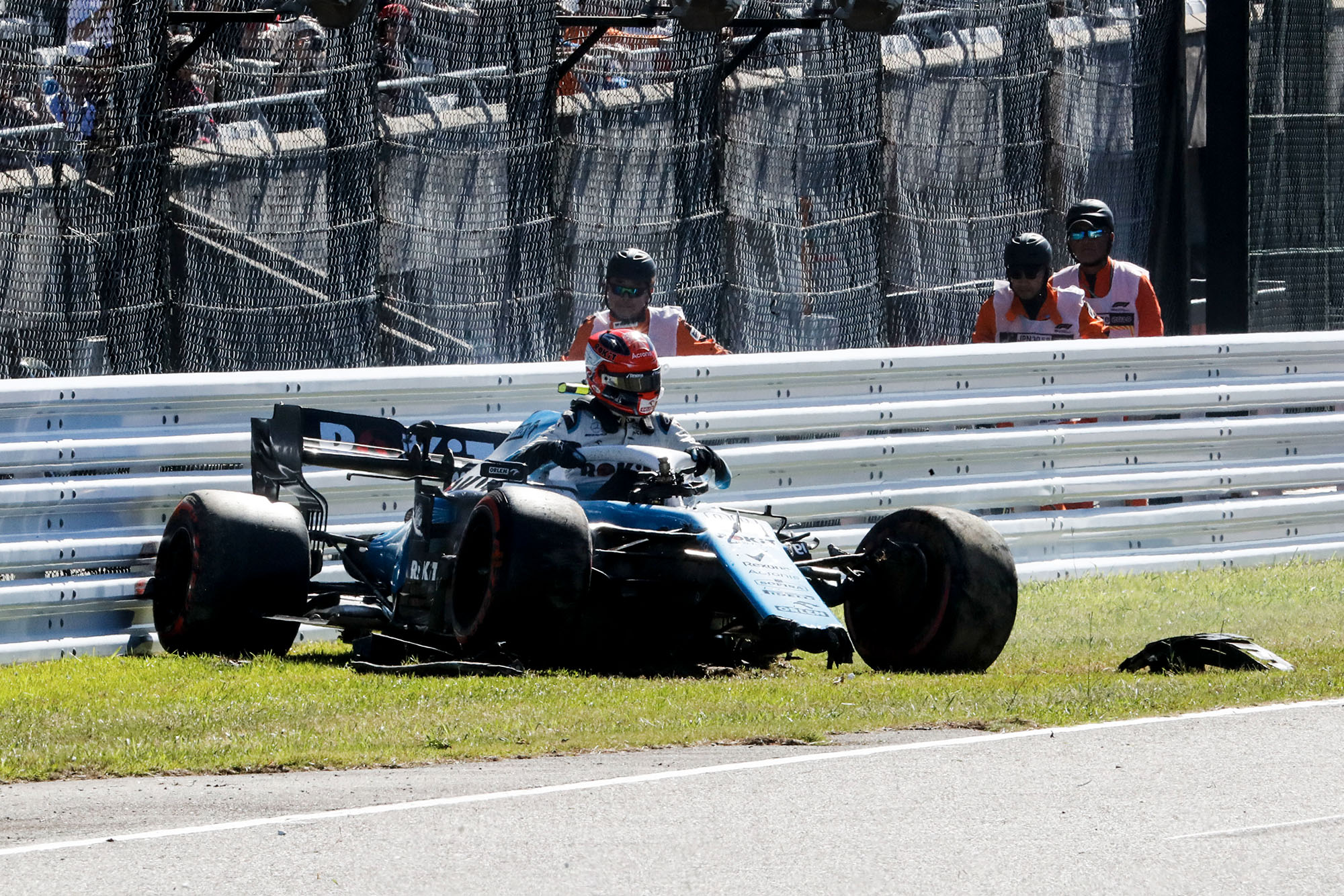 Inherently less downforce that helps Renault at places like Montreal and Monza, bites them at Suzuka. Nico Hulkenberg starts 15th with a decidedly unimpressed Daniel Ricciardo going out in Q1.

The final two top 10 slots went to a strong lap from Pierre Gasly and the Haas of Romain Grosjean, who amused himself on his day off by building a Tamiya Tyrrell P34 six-wheeler, earning himself an invitation to Jody Scheckter’s farm to see the real thing!

Team-mate Kevin Magnussen had a day to forget, caught out by a strong crosswind that put him off out of the final turn in Q1 and brought out the second of two red flags after Robert Kubica had run wide there and shunted his Williams.

What will the race bring? It’s going to be fascinating. The degradation on the soft tyre means that the undercut is powerful. Mercedes race pace will be strong as, also, you suspect, will be Red Bull’s. Assuming they get through Turn 1 first and second, the best way for Ferrari to combat that would be for its second driver to allow a gap to emerge between them. Over to you, Mr Binotto…