Mosley started in motor sport as a driver reaching Formula 2 before going on to co-found the March Engineering Formula 1 team.

He was heavily involved in the Formula 1 Constructors’ Association (FOCA), serving as March’s representative, having trained as a lawyer.

Mosley was also instrumental in the original formation and signing of the first Concorde Agreement. The concept still defines terms under which teams compete in the sport today.

Having been elected as the president of the Manufacturers’ Commission in the Fédération Internationale du Sport Automobile (FISA) group in 1986, he went on to helm FISA as its president after being elected to the role in 1991.

Mosley then succeded Jean-Marie Balestre as FIA president in 1993, a role he held for 16 years, growing to become one of the most powerful individuals involved in motor sport.

During his tenure as president of the organisation, Mosley pushed for greater measures in driver safety and eventually helped form the Formula 1 Safety Commission in 1996 following the deaths of Ayrton Senna and Roland Ratzenberger two years earlier. 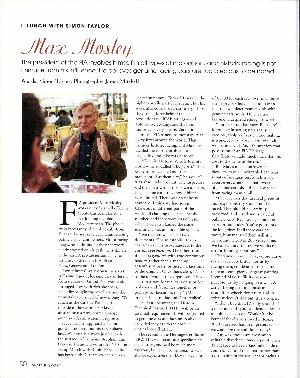 Published in June 2006 FIA president Max Mosley works out of a small office in Monte Carlo, his balcony overlooking the blue Mediterranean. The phone rings incessantly: direct-line calls from…

He was also involved in the promoting of the European New Car Assessment Programme (Euro NCAP) that remains as the standard for the crash testing of new vehicles.

Alongside Bernie Ecclestone, the two shaped the modern Formula 1 that exists today with greater safety than ever before as well as increased TV income and a larger global audience.

Mosley held the position of FIA president all the way to 2009 and was re-elected on three occasions before stepping down following allegations about his personal life.

A court case against the News of the World in 2008 following an expose on his sex life led Mosley to become a strong campaigner for the right to privacy and further regulation of the press. He took the newspaper to British courts where he won his case citing a breach of his privacy.

“He did a lot of good things not just for motor sport, also the [car] industry. He was very good in making sure people built cars that were safe.”