Formula 1 contracts have changed a lot over the years. Stirling Moss’s agreement with Rob Walker famously amounted to a handshake. These days, though, deals are drawn up by legal departments and cover the many machinations of the modern racing world. 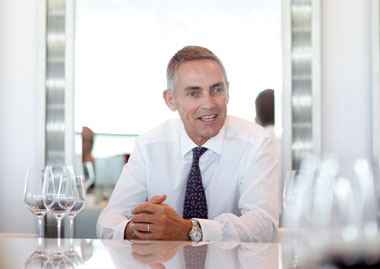 In this month’s Motor Sport, Nigel Roebuck – having procured Gilles Villeneuve’s McLaren contract from 1977 – discusses these changes with team principal Martin Whitmarsh. In a frank interview, Whitmarsh talks Nigel through the standard driver contract and how each one can be different: “This is our base contract, but depending on who the driver is – and what negotiating power he has – there will be variances, which might run to another 10 pages if it were a difficult person. To put it another way – being blunt about it – if I were signing Heikki Kovalainen it would be 50 pages; if it were Jenson Button it would be 52, if it were Nigel Mansell it would be 57, if it were Lewis Hamilton it would be about 60…”

On the thorny issue of team orders and a perceived sense of equality, things seem relatively simple at McLaren, although it may not be as clear-cut at other teams. Their standard contract stipulates that ‘from the first race of the World Championship, [the] team will in each race take all decisions and actions in connection with the World Championship to achieve, so far as is reasonably possible, an equal treatment of each driver, in taking into account the different situations that arise in the course of such race.’ 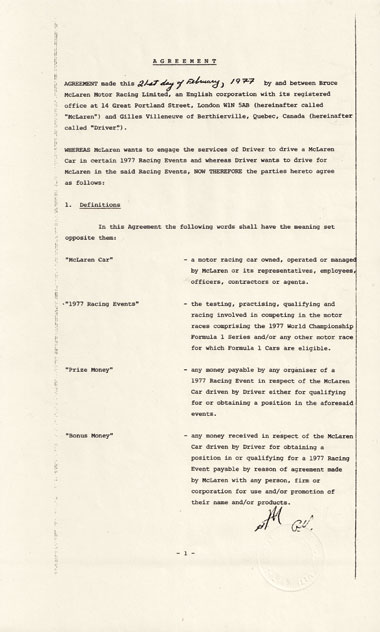 Villeneuve’s contract from 1977, along with being a scant six pages long, marks an interesting era in racing history, when drivers started to pay more attention to how they were being represented. “The current contracts are signed by ‘Driveco’ [Driver Company], they’re not signed by the drivers. At one time there would just have been the driver’s name at the bottom, and Gilles has in fact signed this – but underneath ‘Entreprises Gilles Villeneuve Inc’. This was the start of people positioning themselves as companies.”

It’s refreshing to see a team principal, especially one representing a team with such a squeaky clean image as McLaren, being so open about their dealings… and indeed their current and former drivers.