The FIA has announced that the Formula 1 shutdown period currently being observed will extend from three to five weeks after an agreement was reached with the teams.

The shutdown period usually takes place during the summer break but was already brought forward in response to the postponed beginning of the 2020 season. As well as creating space in the calendar to reschedule races, it allows teams to close factories while countries are in lockdown.

All teams and engine manufacturers must now observe five-weeks of complete shutdown away from the factories as F1 does its best to minimise any further impact, particularly financial, the delayed season has already had. A further extension is also possible.

“Following unanimous approval by the Formula 1 Strategy Group, Commission and all teams, the World Motor Sport Council has ratified by e-vote the decision to extend the Formula 1 shutdown period from 21 to 35 days, to be taken in March, April and/or May, for all competitors and Power Unit manufacturers,” a statement released by the FIA said.

“Further discussions regarding this topic remain open between the FIA, Formula 1 and all teams in light of the ongoing global impact of COVID-19.” 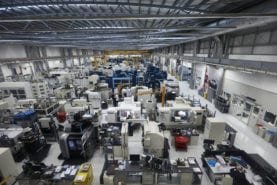 Mercedes has repurposed its entire Formula 1 engine factory to produce breathing apparatus for hospitals. Up to 1,000 devices per day are being produced for the NHS in Brixworth, Northamptonshire,…

Currently, the F1 season is scheduled to begin with the Canadian Grand Prix in June, though that is expected to be postponed too.

It would mean that the season gets underway in France at the end of the month, though July could be more likely with the Austrian Grand Prix taking place on the 5th. The country is set to become the first European nation to lift lockdown measures.

Formula 1 teams have switched focus in the meantime to helping combat the virus, with Project Pitlane aimed at aiding those in need due to the COVID-19 outbreak. Ventilators and assisted breathing devices have been prioritised since the original shutdown came into effect last month, and Mercedes today announced its innovative breathing aids have gone into production, with 1000 units made every day.