Plans have been revealed by Formula 1 on how it aims to help create the “fuel of the future” and introduce 100% sustainable fuels in the near future.

As part of its mandate to become carbon neutral by 2030, F1 hopes to be at the forefront of development when it comes to the creation of a sustainable and environmentally neutral fuel source that works in standard internal combustion engines.

While engine regulations will be frozen at the end of the current season, F1 teams will switch over to E10 fuel for 2022 that includes a 10% blend of Ethanol alongside 90% standard fossil fuel.

In the future as part of ongoing discussions and possible regulation changes, Formula 1 hopes to switch to a fully sustainable fuel that will be capable of powering F1 cars and civilian vehicles with contemporary internal combustion engines. 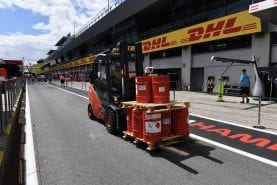 F1’s ‘drop-in fuel’ is targeted to be introduced after the 2025 regulations that will include new engines and potentially new major manufacturers such as Porsche and Volkswagen joining the grid.

The new fuel will be created in a laboratory and combine resources gathered from either carbon capture schemes, municipal waste or non-food biomass. The introduction of the fuels will reportedly cut emissions by as much as 65% versus standard fossil fuel petrols without resulting in a reduction in power capabilities either.

The series has already put several schemes into place to reduce its carbon footprint in order to become more environmentally friendly.

Earlier this season, the British Grand Prix was the first carbon neutral broadcast of a race. Zero emissions and hybrid vehicles were used by on-the-ground staff while HVO (hydrotreated vegetable oil) fuel was used in on-site generators.

F1 also says it will aim to reduce the application of single-use plastics across a race weekend to be replaced by recyclable and compostable materials.