The grand prix is in its final stages and there’s a battle for the ages unfolding ahead.

The leader’s out on his own, but there’s a chasing pack that’s closing the gap and the tension is palpable as the final lap looms.

Then an AWS graphic pops up showing that the leader’s tyres are finished. A second AWS alert calculates that the chasing group will be on him two laps before the finish, and with overtaking assessed as “easy”. You might as well make a cup of tea now.

In a sport with fanatically loyal supporters, few subjects generate as much hostility as the AWS graphics that appear on screen with real-time race analysis.

They are simultaneously accused of ruining the suspense of races; being spectacularly wrong; and distracting from the action.

However, spoiler alert! F1 consultant Rob Smedley, who works with Amazon on the development of new graphics doesn’t agree.

While the graphics will never be perfect at predicting the outcome of a race, that can be a beneficial thing, according to former Ferrari and Williams engineer Smedley.

“You can’t get it right 100% of the time. If you could, we wouldn’t bother coming to the tracks”

Indicating who will win the race based on pre-race simulations would take the air of uncertainty out of a Sunday afternoon. After all, why would you watch if you knew the winner a computer picked out hours before the five lights went out?

“I think that once we’ve got past the initial confusion, we’re engineers, physicists and mathematicians rather than magicians so we can’t predict the future we can just give your best guess of what the future is going to be.

“Equally, this goes on within the teams you know with all the brainpower that you have across a team. You can’t get it right 100% of the time. If you could, you wouldn’t need all of these very, very clever, very well remunerated engineers in teams because the computer will do everything for you and they could go home. We wouldn’t have to bother coming to the tracks.”

In F1’s view, the graphics help to keep viewers engaged, informed and excited even when there’s no wheel-to-wheel action on track.

As well as striking distance predictions, tyre percentage graphics and pit strategy analysis, there’s also corner analysis that allows a direct comparison of approaches to a specific section of track between two drivers. Who carries more entry speed? Who brakes earlier and gets the car rotated quicker for a better exit?

It can all be interesting in the right context but how does F1 pick and choose what to show?

“It’s a fine balancing act. Across those two subsets of the hardcore and casual audience, you have divisions within those so even the people who are avid supporters and will watch every single grand prix, some of them care very little about either the data or the technical side of it in particular,” F1 consultant Rob Smedley explained to Motor Sport.

Keeping viewers informed is difficult when the action unfolds over an hour and a half and sometimes relies on viewers having watched previous sessions or races for greater context. Equally, feeding viewers up to date information is crucial because out-dated info will only further complicate their viewing experience, so how does F1’s AWS graphics actually work?

Data from cars is beamed back to F1 HQ through the cloud and fed into a machine-learning algorythm. The data is processed and read by the machine which fires out the results to the broadcast centre and fed into the production graphics you see like the rev counter or gear selection over the top of the halo. That process in its entirety takes less than half a second.

Using those new graphics in tandem with what is unfolding on the TV is just a new method of engaging fans during a race broadcast.

Some are still miffed whenever they see the AWS logo pop up on a broadcast and the graphics indicate a possible change of leader, and F1 knows that too.

“You know what is really well appreciated and what is perhaps a little bit too dumbed down for your avid fan who has a voracious appetite for data, you know it’s just something that you’ve got to kind of ‘get’ on the journey. 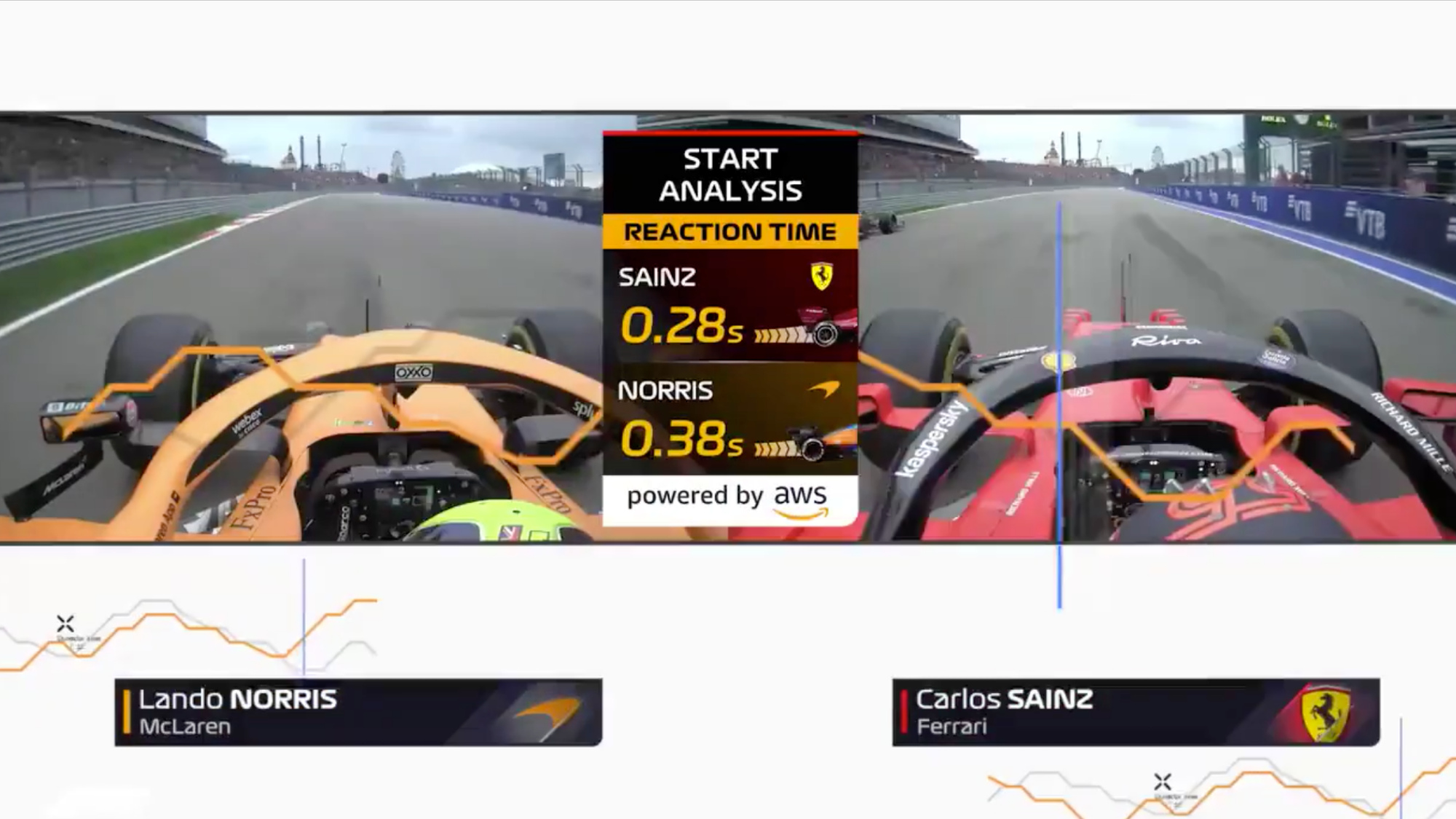 “You’ve got to initiate it if you like, and start to push stuff out there and see how well it sits. I would say up to now, what we’re seeing with the Insight graphics is that on the whole they sit really well.”

Perfecting the presentation is tricky too. While a driver’s tyres may be in the final 10% of their predicted lifespan, a strategy may require an extension of a few laps and accounting for out-of-the-box thinking can’t always be done through graphics shown as a race unfolds.

Picking and choosing what to show though is crucial for explaining the narrative of the race. Smedley says that while the graphics will never be perfect at predicting the outcome of a race, that can be a beneficial thing.

“There’s lots of different organic outputs of us presenting data to the public and then it’s giving them a slightly different, nuanced understanding of other areas of Formula 1, the much more technical area of Formula 1 that actually this is really difficult.

“So how do those guys on the pit wall make all the decisions? Well, what they do is they have to just be extremely good at their job and use their natural intelligence, augmented with data, tools and data assets to be able to then make better decisions and that’s all we’re really trying to do with these AWS Insights down at a fine level to allow you to make a more informed decision in how you consume a Formula 1 grand prix.”