The incoming Formula 1 cost cap will help Williams operate on a similar budget to those of Ferrari and Mercedes according to its acting team principal, Simon Roberts.

The team was sold to Dorilton Capital in August, bringing to an end the Williams family era. Funding from its new owners will push it towards the cost-cap ceiling according to the team boss.

“Our budget is based on getting towards the cost cap,” Roberts told F1.com

“This year it’s too late. We’ve only got four months to go and we’re pretty much set on where we are headed. But for next year, we are looking at what we can do and we now have the finances behind us to do that. But it’s not a given. We will only spend money and invest where it makes sense.”

From the 2021 season, a $145 million budget cap will come into effect in an attempt to level the playing field for all teams. Car performance spend will be limited to close up the grid, while marketing costs, driver and top-three personnel salaries will not come under the restrictions 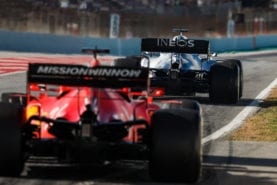 Since the beginning of the hybrid era, Williams has slumped from third in the constructors championship in 2014 to back-to-back 10th place finishes in 2018 and ’19.

The team has its sights firmly set on the new regulations though, with the 2022 rules bringing in a new generation of car that Roberts hopes will be the turning point in the team’s fortunes.

The development of the cars will come under the spending restrictions which the Williams boss believes could put every car on the grid at a similar level of performance.

“We can’t work on the cars at all for 2022 yet. We’re locked out of the tunnel and CFD and basically the intent is good, but how the intent plays out, only time will tell. We can’t see any reason why it shouldn’t be as expected, subject to any loopholes or quirks.

“I think there has been a lot of work done and the guys that have created the regulations have been exploring that possibility of loopholes, so our expectation is that it should be a leveller playing field than we are used to today.”