The enduring popularity from 1978-’88 of Yorkshire TV’s Saturday evening quiz show 3-2-1 was based almost entirely on a dexterous finger-based gesture by host Ted Rogers.

Its weak jokes – bar the occasional edgy adlib – dimwitted answers to convoluted clues and a booby prize in the form of a motorised bin provided thin pickings otherwise.

“Was it too much to ask for a British GP win at Silverstone?” John Watson

But give schoolkids a cheeky excuse to ‘flick the vees’ during playtime and you’re on to a winner.

John Watson hoped so, too: third at Jarama and second at Dijon, “Was it too much to ask for a British GP win at Silverstone?”

Probably it was – on a power circuit more suited to his McLaren’s turbocharged rivals – but at least he was able to bat away a straining media’s inevitable questions with a glib cultural reference while politely ‘giving them the finger’. 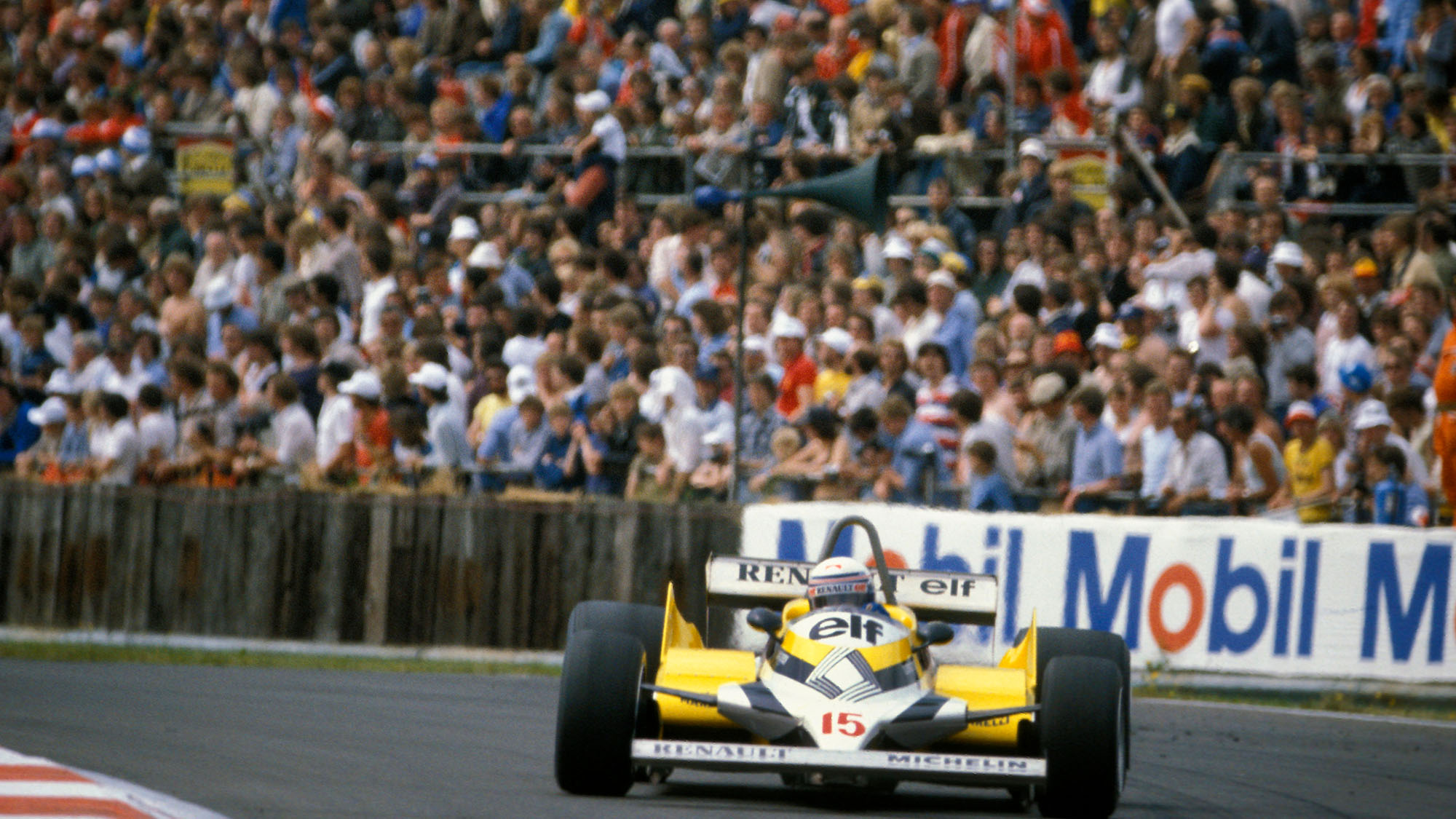 Despite the increasing competitivity of the mould-breaking carbon fibre MP4 during the first half of 1981, ‘Wattie’ was not in the best of moods: his Golf GTI had been broken into. Again

“That was probably at Gatwick or Heathrow,” he recalls, 40 years on. “Their short-term car parks were notorious: smash a window, grab a stereo. I lost a really nice jacket that way, too.”

He was more annoyed by the damage done: “That was the best little hotrod: a set of ATS rims, Goodyear NCT tyres and a Bilstein shock’ pack. It was the quickest car up and down from Bognor to Heathrow that I’ve ever had. With plenty of personality and character as well.”

In contrast, the McLaren did not meet with his high expectations during qualifying at Silverstone. It wasn’t bad – he would line up on the inside of the third row – rather it wasn’t quite right: rookie team-mate Andrea de Cesaris was just 0.016sec slower in sixth; and Nelson Piquet’s Brabham, fastest of the atmos, was 0.76sec faster in third. The runaway Renaults of René Arnoux and Alain Prost, meanwhile, had stitched up the front row by almost a full second.

“Villeneuve was driving like a hyperactive child” John Watson

Watson: “The difference at Dijon, where I finished second to Prost, was that its flowing nature around the back of the circuit allowed our nimble car to compensate more for its lack of power.”

So to find himself bottled up behind Gilles Villeneuve’s bucking bronco of a Ferrari – as he had been at Jarama – was an immense frustration. The French-Canadian had made another of his telepathic starts to burst from the fourth row.

“He was driving like a hyperactive child,” says Watson. “Gilles had given outstanding performances at Jarama and Monaco – wins that were nearly entirely down to him – but that was not a great car on an ‘aerodynamic’ circuit like Silverstone.

“He was horsing the car. It’s what he enjoyed doing. He would have been sitting there having the time of his life. But I felt it almost inevitable – especially in the Woodcote chicane, where he was getting wilder and wilder – that he was going to lose it.”

That came to pass as early as the third lap: a bit too much kerb had the Ferrari, already riding high, bouncing on its springs before spinning in a cloud of smoke. The Williams of an unsighted Alan Jones, who had also got the jump from the fourth row, joined it in the fencing – as did de Cesaris.

“Andrea was a quick kid but didn’t have enough life or motor racing experience,” says Watson. “He did what he always did: reacted suddenly. I’m amazed he missed me.”

Watson had braked almost to a standstill in avoidance – and stalled the engine: “Luckily, I had enough presence of mind to flick on the electric fuel pump and enough momentum – about 10-15mph – to bump-start it.”

But not before Carlos Reutemann (Williams), the Alfa Romeos of Mario Andretti and Bruno Giacomelli and Talbot-Ligiers of Patrick Tambay and Jacques Laffite had grabbed their opportunities.

So began a trademark Watson charge: the Ligiers were picked off easily; Reutemann was sold a nifty dummy into the chicane; and Didier Pironi, his Ferrari’s engine about to expire, was tucked away at Becketts. 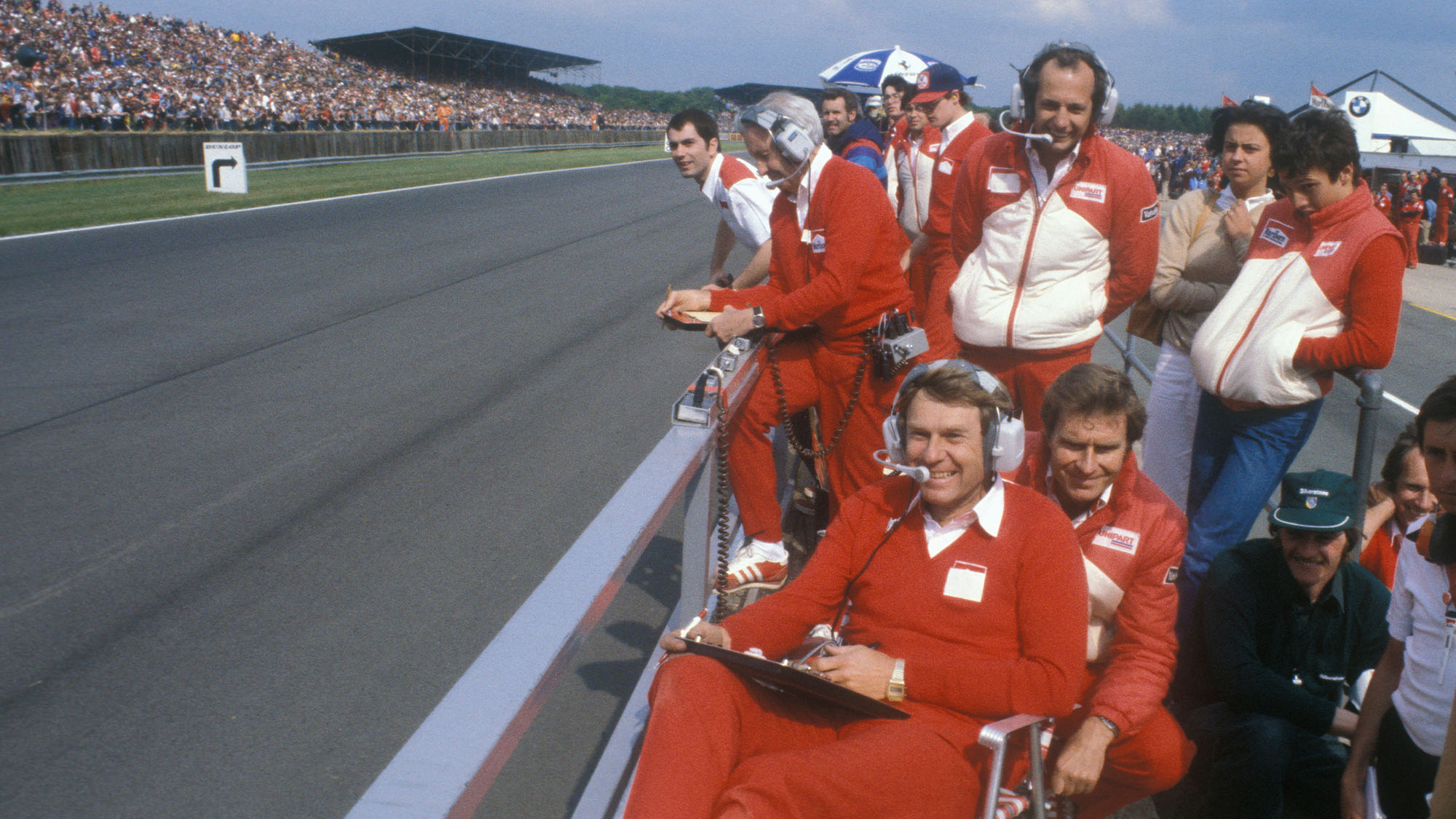 “Everybody talks about that McLaren’s carbon fibre tub,” says Watson. “Clearly that was a very important element. But [designer] John Barnard was never one to do things the inexpensive way and so many functions of that design were exceptional. For example, the front uprights were Fabergé-like pieces of engineering and the car was particularly stable under braking.”

When combined with the misfortunes of Giacomelli (gearbox), Piquet (tyre failure/crash) and cruising leader Prost (engine), Watson found himself running in second place by lap 18 (of 68).

And there he stayed, unable to make any impression on Arnoux – until the Frenchman began to suffer the same valve problem that had halted Prost. The 80,000-crowd sensed an opportunity – and Watson sensed the crowd: “Your peripheral vision is pretty engaged thanks to the massive adrenalin rush that a GP gives you. Plus some were in my direct line of vision coming down Hangar Straight. I was aware that something was going on.”

He carved chunks from the gap to move ahead with eight laps to go.

“Now I was getting pit messages from an over-animated Ron Dennis,” he says. “I understand why. This was very important for Ron and John. They had put their houses on the line to become a part of McLaren, and this was their chance to confirm and consolidate what they had sold Marlboro on: young people with drive and energy, motivation and ambition, using the latest technology to turn around one of the great F1 teams.

“But it’s not easy to flick a switch and suddenly go 2sec per lap slower. I didn’t want to lose my rhythm and so my method was to short-shift; by the last lap I was changing up at 9000rpm instead of 10,600. But that only made a difference of a few tenths.” Hence Dennis’s agitation, one imagines.

Watson had things on his mind, too, what with just one victory in his previous 115 GP starts, and having lost the 1977 French GP on the last lap because of his Brabham’s momentary cough, short of fuel. 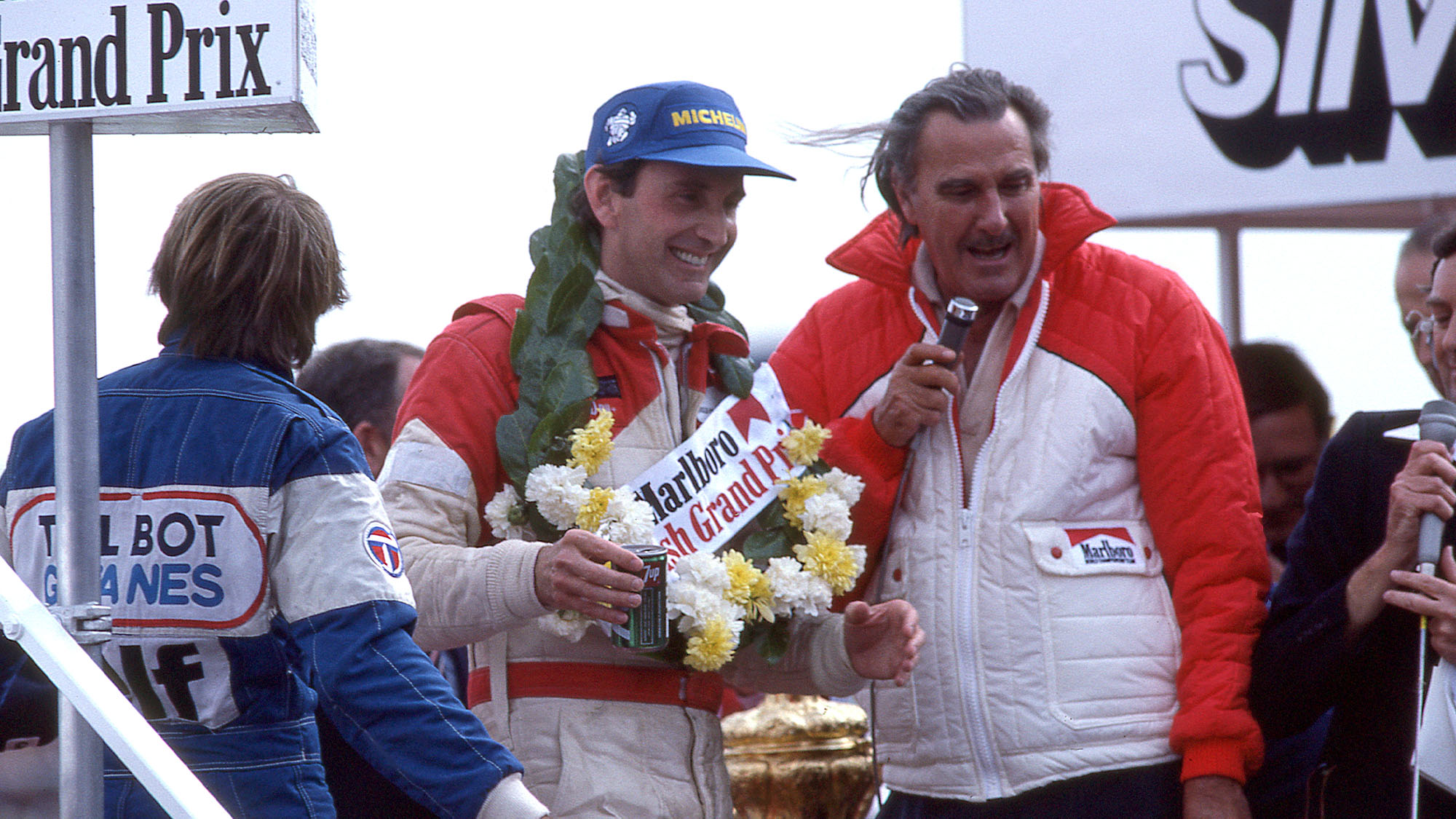 He wasn’t to be denied this time.

There was no ‘Mansellmaniac’ track invasion, thank goodness. Instead there was an uplifting edition of For He’s a Jolly Good Fellow as a bashful winner sipped 7UP while stood on the back of the podium truck.

Reined-back admiration rather than whipped-up adulation.

“It was an unexpected victory and I think the crowd took it to their hearts,” says Watson. “They were enthusiasts rather than the corporates that go nowadays.

“I am very fortunate that still to this day I meet people who say that they were there. Some of them must have been kids at the time – but it registered with them.

“It was just a very happy day, a very important part of my life.”

Watson would miss his lift to Kidlington airport, having spent until 9pm dealing with the attendant demands of victory, and doesn’t recall how he got there.

Don’t get me wrong – he wasn’t drunk. Unlike his friends, who were sufficiently “lubricated” by the time he got home that Watson had to take charge of the barbeque: “I was the only one able to ensure that the food wouldn’t end up burnt.”

And slung in the bin.