George Russell has waited for three years to score points with Williams, and the Styrian GP looked like it was finally going to be his opportunity.

Alas an engine issue first delayed and then ultimately stopped the Englishman, so he’ll have to wait for next weekend’s second race in Austria to have another go.

It was a great shame, because this was the strongest performance on merit by Russell and his team during a season in which they’ve shown steadily improving form. They have now become genuine contenders for the top 10 both in qualifying and races, something that would have been a stretch last year.

“We’ve gone down a slightly different direction with the set-up, and it seems to be paying off” George Russell

Every weekend Russell is further staking his claim for that inevitable promotion to Mercedes. We all know that it’s going to happen – it’s just a question of when.

Russell headed to Austria on the back of a solid 12th place in France, and while that result might not sound too spectacular, it was a race where all 20 cars finished. He beat Charles Leclerc’s Ferrari, among others.

On Friday at the Red Bull Ring Russell’s headline times were unspectacular, but he caught the attention of rivals with very good long run pace in the afternoon session. He was flattered slightly by starting his run with brand new hard tyres that had not done low fuel running – a legacy of the team switching its usual plans around in order to beat rain that never came – but the car was quick, nevertheless.

Come qualifying he sailed into Q2. Instead of then getting stuck in the familiar 13/14/15th area he logged 11th place, just 0.008sec behind Lance Stroll’s Aston Martin in 10th. 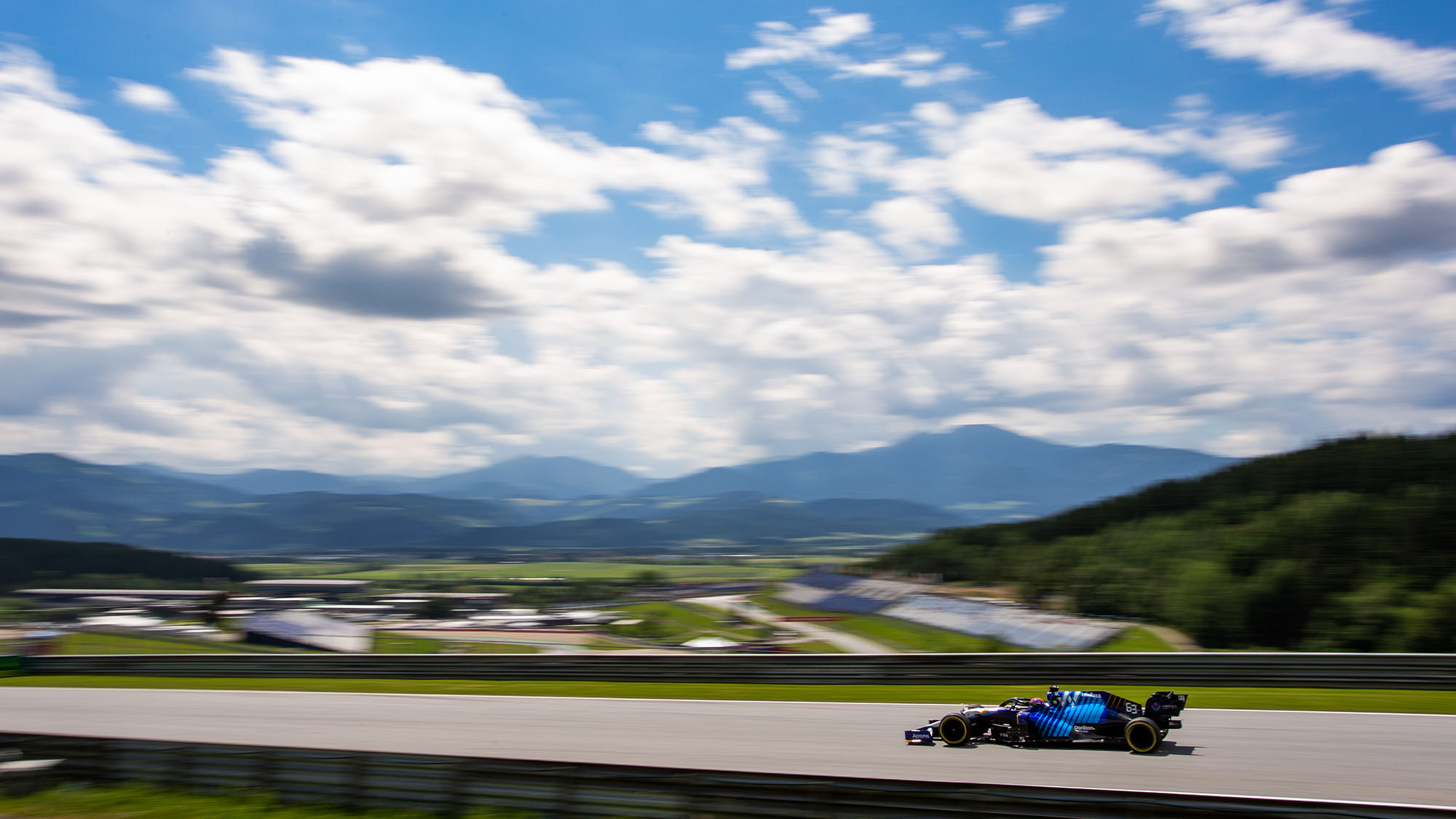 Recent aero upgrades, first seen in Baku, are clearly starting to pay off. It helped that too the wind level, something that has hitherto tripped up the Williams, was not significant.

It was incredibly frustrating to be so close to finally making Q3, but typically, he saw the positives.

“Obviously we want to get into to Q3,” he said after the session. “That would be a great achievement. But so close, so satisfying when we get the maximum from it, and we do this a lot. And even more, we’re putting a lot more emphasis on Sunday pace, and just trying to really maximise the car for the race pace.

“So let’s see how it turns out tomorrow. I think we are there on merit. We’ve got a lot of quick guys behind, [Daniel] Ricciardo, [Carlos] Sainz, [Sebastian] Vettel.

“Definitely points on the table. We’re looking forward. And we’ve gone down a slightly different direction with the set-up, and it seems to be paying off. But we’ve only had a couple of races like this.

This really was one of the most straightforward of grands prix of the modern era, Max Verstappen and Red Bull-Honda never looking anything other than comfortable victors. Lewis Hamilton and…

“We need to give it a bit more of a chance to see if this is real throughout. But having that confidence in the car is a big thing. And today’s a very calm day, not a single gust of wind or anything. I’m sure that that does also help us a lot.”

Regarding his race pace he added: “Yesterday was probably the best Friday we’ve ever had. Let’s see how that translates tomorrow. We did have a new set of hards for the race pace run, which I think did account for something – we didn’t do the low fuel on the hard. But the car felt really good. And we looked strong. And see let’s see if it is translates into something tomorrow.”

The big benefit of starting 11th was that those immediately in front of him were committed to the soft tyre, while he was able to take mediums and thus run longer into the race. He also received a little bonus in the form of a grid penalty for Yuki Tsunoda that promoted him to 10th.

The downside of starting on the mediums was that he had a less grip off the line than those ahead, so there was little chance of making immediate progess. However on the first lap he gained two spots from the Charles Leclerc/Pierre Gasly clash, and fought back past Tsunoda, who had briefly got ahead.

He thus ran eighth for the opening laps, right behind Fernando Alonso’s Alpine. Lined up behind him were Ricciardo, Tsunoda and Sainz – in some very quick cars.

“The issue was so typical in a way, but that’s racing, it’s not meant to be easy” George Russell

Then around lap 17 came the message that was to change his day: “George, we need to convert to Plan B for reliability, so you need to pick up the pace.” Plan B obviously meant two stops instead of the scheduled one. Russell knew something must be up as it made no sense in strategic terms.

A few laps later he said, “I trust you, but I’m happy with where I am at the moment,” to which his engineer replied, “Copy that, there’s something we need to do.”

Sure he enough when he was called into the pits early he had to sit there for over 18 seconds while a mechanic replenished the power unit’s pneumatic system. He tumbled to the bottom of the order, any chance of points gone.

The stop hadn’t solved the problem, and not long after he returned to the pits to retire the car, having run 36 laps. 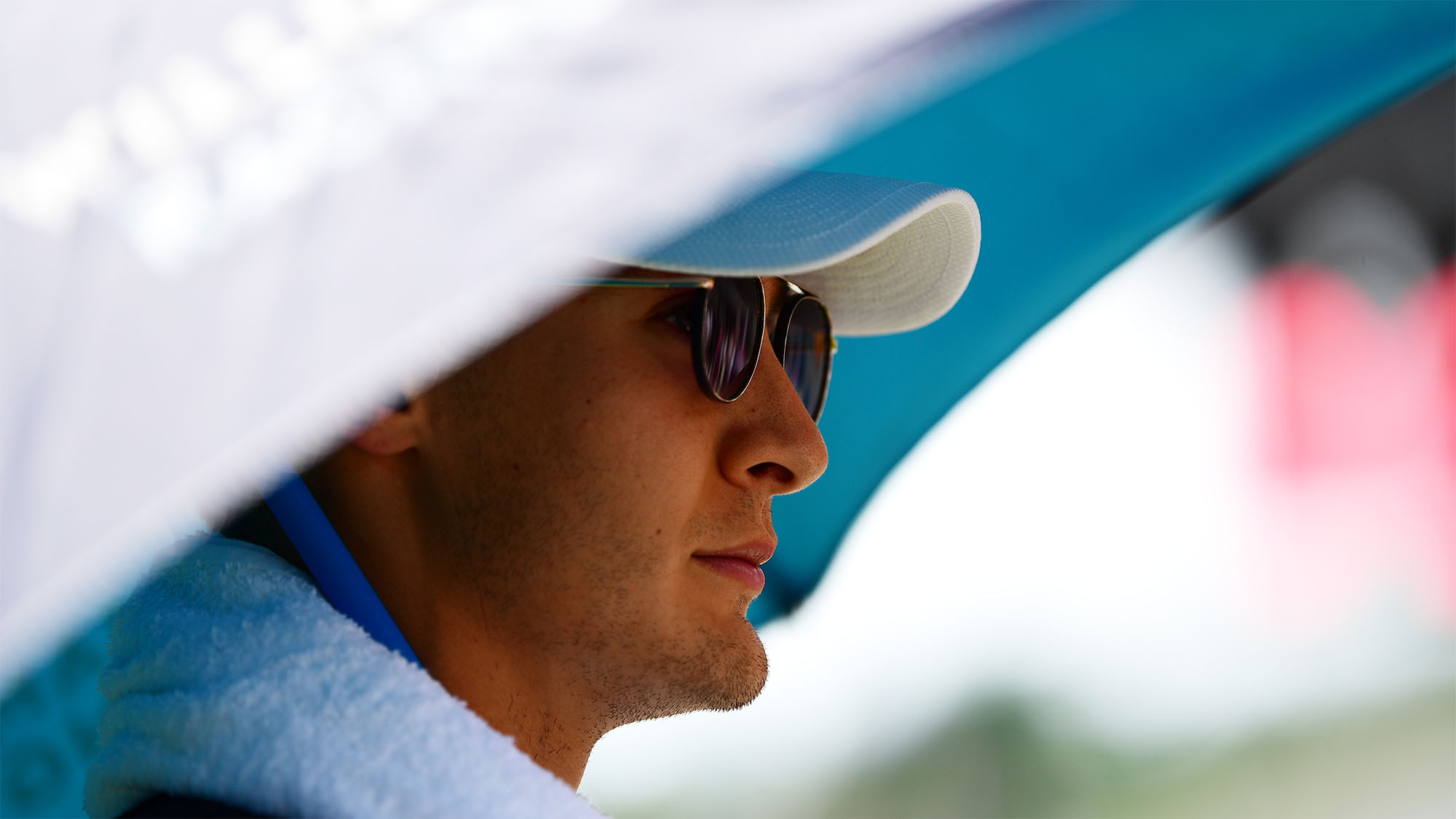 “When I heard that message, obviously, I was a bit confused,” he told Motor Sport. “We were having a great race. And I saw that they had to top up the pneumatic pressure that was depleting. And obviously, they topped it up, and it went down again.

“So quite a rare issue, not one that the team have experienced in a long, long time. I’m gutted for the team to be honest, they’ve all worked so hard. We all have. And these opportunities don’t come every race. So typical in a way, but that’s racing, it’s not meant to be easy.”

Russell had no doubt that he was going to be able to hang in there and secure his first top 10 result with Williams.

“Absolutely. I think we would have definitely finished ahead of Alonso [who took eighth], I think he was struggling a bit. I was just managing my tyres, out of that midfield gaggle I was the first one on the mediums.

The good news for Russell is that he’ll take to the track on Friday in practice for the Austrian GP with his confidence high, and knowing that he has a strong package.

“Next week, we’ve got a different compound of tyres, which will make things interesting,” he said. “We know the [softest] C5’s are obviously very sensitive. It’ll mix things up a bit in the race with the deg. We’ve got to be fighting for Q2, again as the minimum, pushing for the back end of the top 10. And then trying to make the most of the race.

“I think we’re doing a really good job at the moment in it. And it definitely will come. But a day like today could have cemented P8 in the constructors’, as Alfa aren’t looking as strong these days. We could probably have come away with four or six points today, which is pretty massive.” 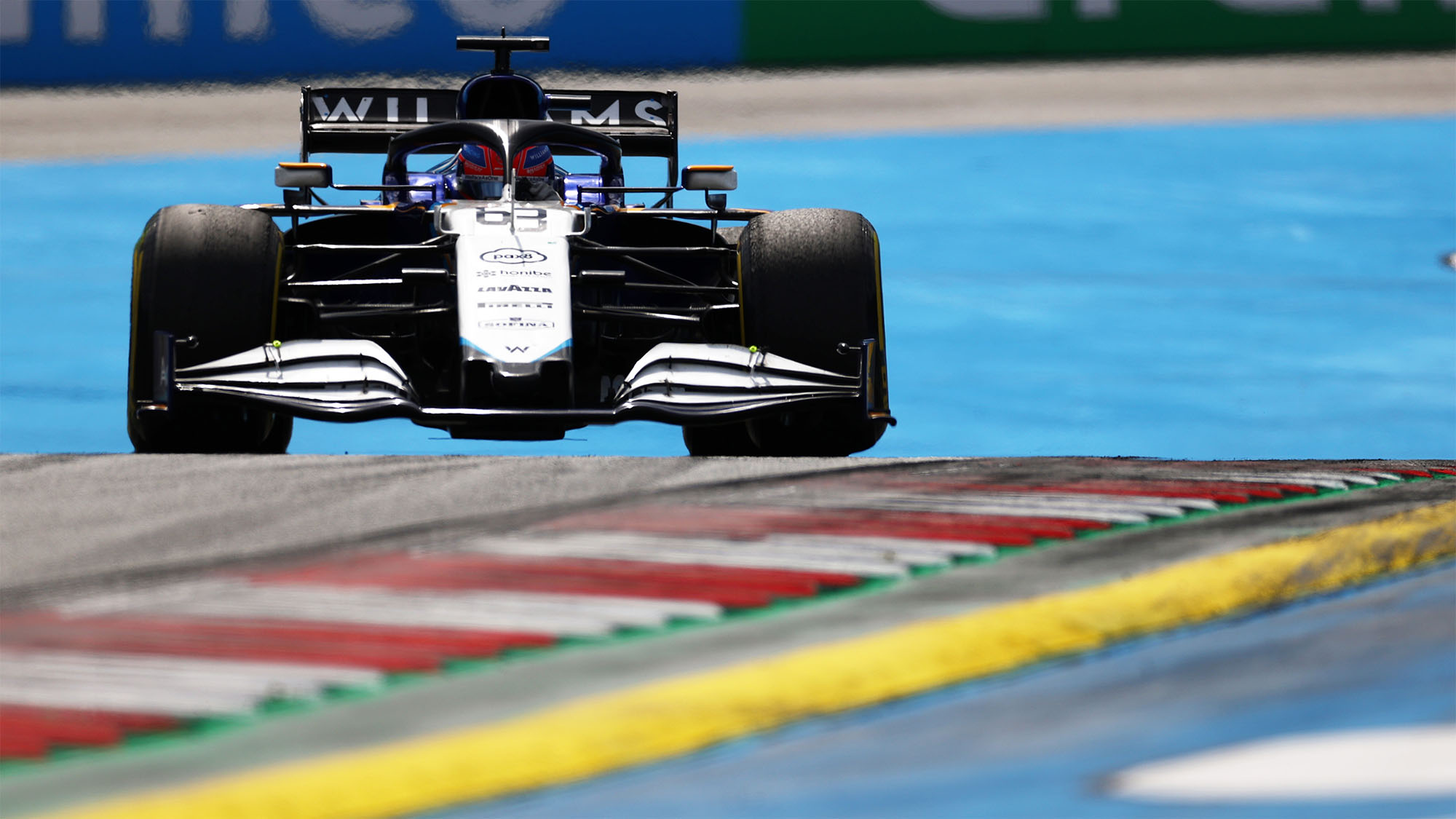 That was typical Russell, thinking of the team’s overall situation, and not the loss of his own first points in a Grove car.

It’s clear that the latest upgrades have worked well, and together with a restructuring under new boss Jost Capito, the pieces are falling into place.

“I mean we’re consistently learning more and more, week in, week out, and it’s not just about what statistically makes the car go quickest, it’s what benefits the tyres the most, what gives me the most confidence, what everything together can give me the best result.

“And I think we’ve gone in a very slightly different direction in recent races. We need to give it a bit more of a trial at another circuit. It is looking slightly more promising.

“I do think that maybe the last few races, we have just put things together incredibly well. And everything has been really well aligned, and we’ve probably capitalised on other people’s mistakes.

They can’t all be classics, but that doesn’t mean they can’t also be particularly significant, and Sunday’s first race in Austria might just prove to be one of the most…

“So we have to perform at excellence, and hope that others don’t. But nevertheless, P11 in quali, we had a good race last week in France, we would have been in the points today.

“Let’s not get too carried away with ourselves, having just had two races like this. I think we need to see again and obviously, we’ve done eight races so far, and in only two of which we have been truly pretty quick. So yeah, real shame for everyone.”

Russell didn’t get the reward he deserved, but the whole pitlane took note of his superb weekend. So what of his future?

It’s easy to assume that it’s a matter of when Toto Wolff decides to tell Valtteri Bottas that he’s surplus to requirements in 2022, but it’s not quite as simple as that.

Mercedes is in the middle of its toughest title fight to date, the team is working hard on its 2022 project, and it’s trying desperately to stay within the budget cap. There’s a lot of stuff for Wolff to juggle, and drivers are just one issue that he has to attend to. 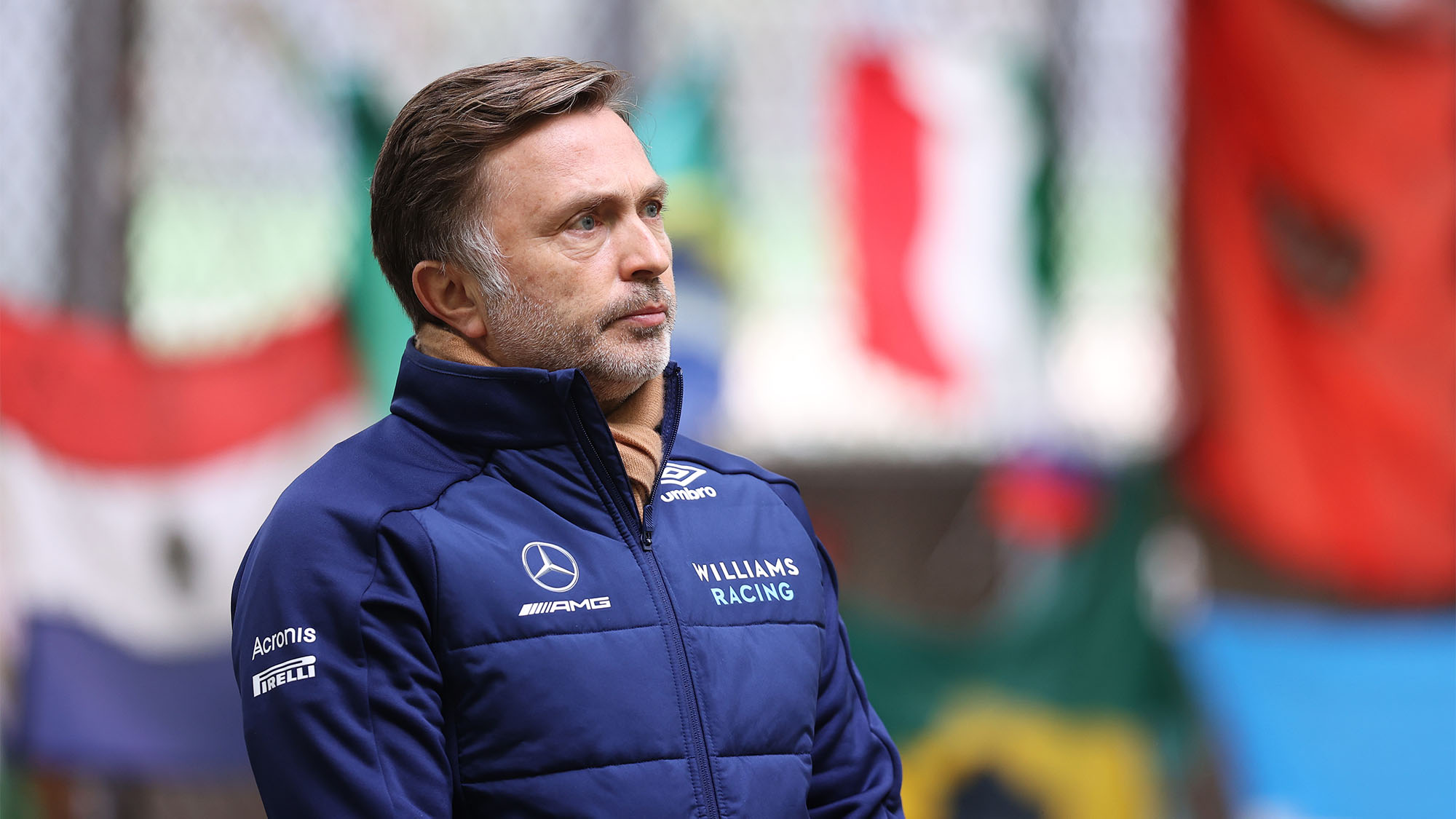 Russell says Capito and co are “doing it properly”

And top of all that he still doesn’t know if Lewis Hamilton will race on next year, and until that becomes clear and is fully signed and sealed, he can’t afford to let Bottas go – the Finn might still be needed alongside Russell.

If for some reason Russell doesn’t receive the expected promotion in 2022, he faces a fourth year with Williams. A few months ago that probably didn’t appeal too much, simply because he’s understandably so keen to make progress. Now at least he can see that he can do great things with the outfit that he’s helped to rebuild.

“I just think the overall morale in the team is a bit more upbeat. And everyone’s excited for what the future holds. The guys are not messing around, [owners] Dorilton and Jost. It’s a really exciting period for the team.

“Ultimately, most of the resource is going into next year. And they want to win. And as I said before, it might sound a bit silly at the moment, but a big change next year. They’re doing it properly.”