Looking back at Eddie Cheever’s rocky journey to Formula 1, on the 1998 Indy 500 champion’s 61st birthday 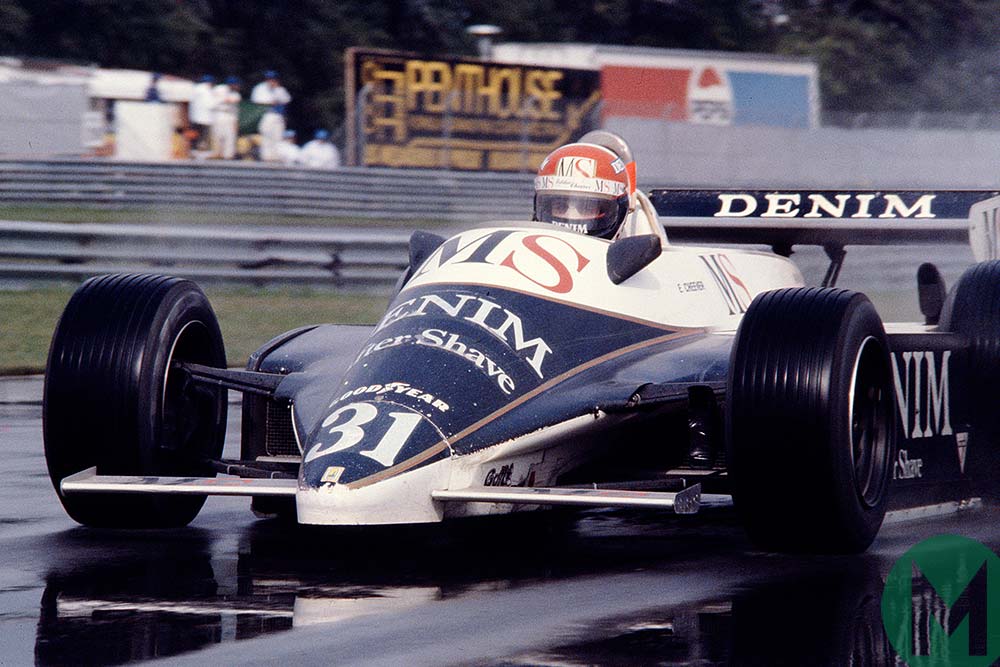 Eddie Cheever launched his 1979 season from pole position in a vivid Italian single-seater.

It wasn’t the scarlet Formula 1 Ferrari that he had long dreamed of and only recently had seemed destined for. Rather it was a tangerine Formula 2 Osella.

And, for that, the 21-year-old Rome-raised American was “extremely grateful”.

It had all happened so quickly: national and European karting titles; instant success in Formula 3 in Britain and Germany; Formula 2 victories for Ron Dennis’s Project Four Racing; founding membership of BMW’s groundbreaking Junior Team; and a testing contract with Ferrari – with the promise of an outing in the non-championship race being mooted for Imola in 1978.

The descent was even more sudden – and partly self-inflicted – admits Cheever: “I had just signed a contract with Ferrari and finished two very successful weeks of testing at Fiorano; Carlos Reutemann was there, too, doing the first secret tests with Michelin.

“I’d also started dating my wife-to-be. So I thought it would be fun to race at Vallelunga, my home city’s track, and really wanted to impress her. A privateer had asked me to drive his Jägermeister-sponsored Group 5 BMW – and I asked for what I thought was a lot of money: the equivalent of $500. Ha-ha!

“I never got paid, by the way.

“Anyway, the front-left wheel broke – or its tyre failed – on the second lap out of the pits in practice and I went straight on and dived under a guard rail.”

The impact shattered Cheever’s left hand: “I broke three small bones in my palm and couldn’t touch my little finger for three months. It was so painful.

As was the news, gleaned from a newspaper while recuperating in hospital, that Ferrari had signed Gilles Villeneuve for 1978.

The French-Canadian, eight years Cheever’s senior, was his biggest rival as the most exciting up-and-comer. They’d been team-mates briefly at Project Four – at the 1976 Pau Grand Prix – and co-driven a BMW to second place in the 1977 Mosport Six Hours.

Though Villeneuve understandably got the nod to replace disaffected 1977 world champion Niki Lauda at the Canadian Grand Prix, as well as the subsequent Japanese Grand Prix (held on the same day as the Vallelunga Six Hours), had Cheever been more patient they might have been reunited in F1.

“Instead I thought, ‘That’s it! No more chance for me’ and went to see Mr Ferrari to get him to break my contract. It took me four trips before he would see me.”

“When finally I got into his office, he said, ‘Are you sure you don’t want to race for Ferrari?’ But I just had this bright light in my eyes: I had to race in F1 in 1978.

“I had made a decision that almost destroyed my career.

“I drove what was basically a large Formula 2 Ralt at the Argentine and Brazilian GPs. Mission: Impossible. What was I thinking? That we could compete against Ferrari, Lotus and Brabham in a car that had just a few mechanics on it?

“Plus my hand was still excruciating.

Having walked away from Teddy Yip’s ‘dream’ team, Cheever managed to qualify a Hesketh for the South African Grand Prix; its engine failed after fewer than 10 laps.

A fortnight later he had to watch F2 rival Keke Rosberg guide Yip’s compromise car to non-championship victory at Silverstone, in torrential conditions that Cheever would have given his eyeteeth for.

A fourth consecutive F2 campaign with Dennis failed to deliver a victory – Cheever finished fourth in the standings – and no offers of F1 were forthcoming for 1979.

“I went from being one of the leading young drivers to one that had been passed by,” he says. “I had made a series of stupid miscalculations.

“I found myself sharing Osella’s BMW with Giorgio Francia. Which was good fun. And I liked Mr Osella, who was an incredibly interesting person. But really everything was dire in 1978.

“I had hit absolute bottom at a very young age and there was a good chance that I had done everything that I was going to do and that there would be no more racing.

“That was a reality.”

It dusted off its F2 car, designed by Giorgio Stirano and not seen since a partial campaign in 1976, and adapted it to the advent of skirted underbody aerodynamics and Pirelli radials rather than Goodyear’s dominant cross-plies.

And signed Cheever to race it.

“It was a brand-new world for me,” he says. “I thought everybody would be as organised as Ron. When I went to Osella it became obvious that this wasn’t the case. Theirs was a cottage industry.”

For example, in the time it took Project Four to complete its assigned batch of 15 Procar racers for BMW for 1979, Osella built three.

“And yet,” continues Cheever, “they cobbled something together that almost won the European F2 Championship.

“Pirelli had a lot to do with that. I had never, ever had to go some place and help guide a car’s development – we changed it considerably during the season – and I was having to go through a learning experience with tyres, too.

“Pirelli, chosen mainly for financial reasons, had all sorts of crazy ideas. Some [tyres] wouldn’t last two laps and some would be rock hard. But they did everything they could for us and found a way to be successful.

“Also Osella had got [Italy’s governing body] CSAI to pay for wind tunnel work and the car had a lot of downforce and was well-balanced. The arrival of ground effect had given us the chance to jump right in at the front.

It had been a big year. It launched Osella and relaunched me. But that wasn’t the end of it. Osella then had the balls to go race in F1

“By the time we arrived at Silverstone [in late March] the car was flying.”

Cheever, coping with sagging oil pressure, fading brakes and a cracked exhaust, led for much of the way but was overhauled on a drying track by the lighter Project Four March of Derek Daly.

Victory came his way, however, when the unlucky Irishman suffered gear-linkage problems on the last lap.

“I had lot of head-to-heads with Daly that year,” says Cheever. “Formula 2 was very aggressive. And whenever it rained we had to make sure that we got as many points as possible…”

Charging from 12th on the grid, he took the lead of June’s Pau GP on lap 31 (of 73) when he nudged, “by mistake”, Daly from contention: “I would say that he came down on me. But no doubt we would argue about it to this day.”

A third win was obtained in the July dry at sandy Zandvoort.

“Managing rear tyres was our biggest problem and something I wasn’t always the best at,” Cheever adds. “We had different compounds on the inner and outer shoulders and the long straightaway there gave them sufficient respite that they made it to the end.”

Sadly this unexpected title challenge would fall at the last.

Jointly second in the points with former BMW Junior charger Marc Surer – and one point behind Brian Henton, whose Enna victory was under appeal – Cheever could do no better than seventh at Donington Park and slipped to fourth in the standings.

“It had been a big year,” he says. “It launched Osella and relaunched me. But that wasn’t the end of it. Osella then had the balls to go race in F1.

“And I put all my chips in with them.

“The first three GPs of 1980 were nightmares. The car was 200lb overweight and its skirts kept sticking up, over kerbs. It was a very difficult transition to go from winning races to starting from the back of the grid.

“But by the end of the season I was qualifying mid-grid. That got me my ride with Ken Tyrrell for 1981.

“I would have to give Mr Osella 110 per cent for finding a way to keep everything together from sporting and business perspectives; to find the sponsorship and build an F1 car – and survive in F1 for 10 years.