Gunnar Nilsson won his maiden Grand Prix victory after a brilliant drive in tricky conditions. But he was already afflicted with the cancer that would end his life just a year later 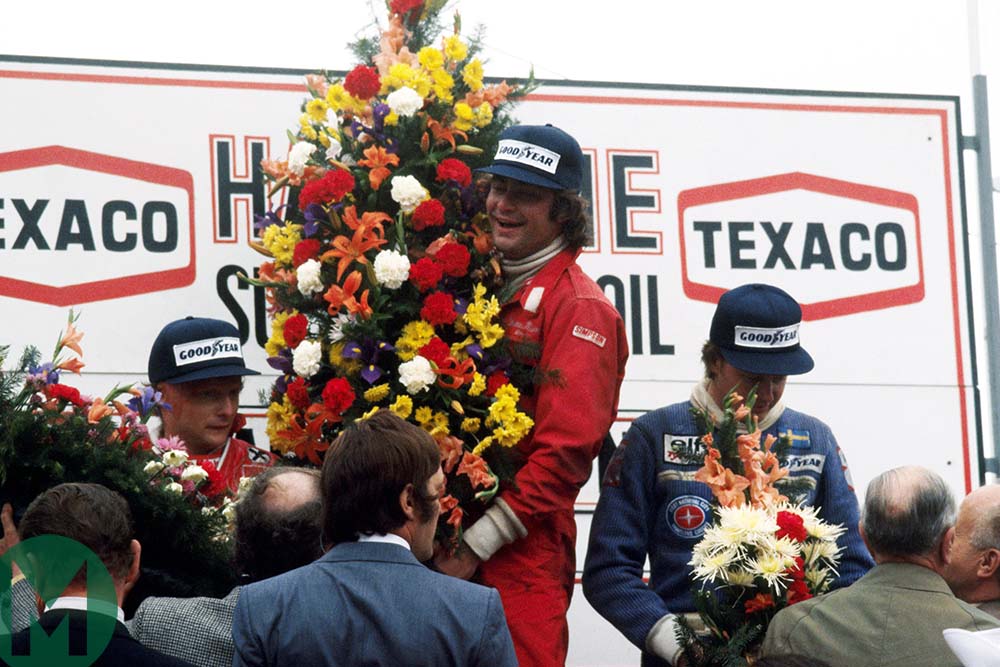 The backdrop was a damp grey June afternoon and a Zolder circuit that was soaked and enveloped by a virtual sandstorm, whipped up by an evolving gale.

In the current era, drivers would be obliged to start behind the Safety Car – if at all – but in 1977, the cars were dispatched on their warm-up lap fitted with slicks.

Even by the standards of the day, this was folly on a grand scale and it took less than a lap for this to dawn on officials.

The start was abandoned, the race declared “wet” and drivers were offered an opportunity to fit suitable tyres.

The day would end brightened by a first-time grand prix-winner’s smile.

Defending world champion James Hunt was the one driver to remain on slicks and this maverick decision proved to be a flawed gamble that ruled him out of contention.

Two other potential race winners were dispatched before the end of the first lap: John Watson (Brabham BT45B-Alfa) beat poleman Mario Andretti (Lotus 78) off the line at the delayed start.

With visibility severely compromised by the spray, Andretti clipped the back of Watson’s car before the opening lap was complete and both drivers spun into retirement.

Behind the leading pair, Andretti’s team-mate, Gunnar Nilsson, ran off the road at the same point, leaving the path clear for Jody Scheckter (Wolf WR1) to take the lead from the recovering Swede. 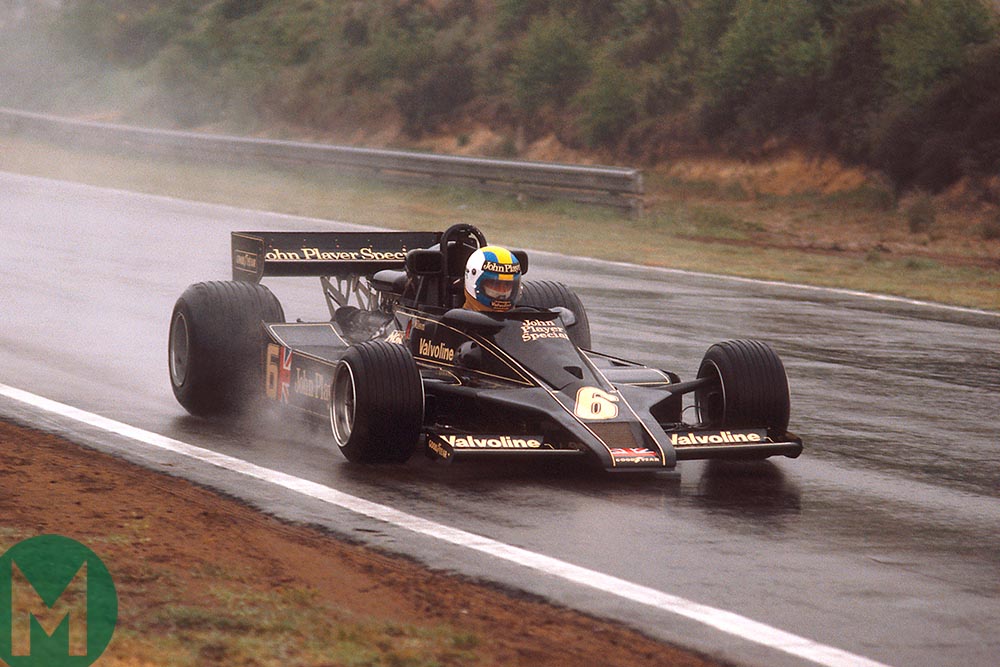 Nilsson had been struggling with his Lotus ahead of the race Photo: Motorsport Images

It looked to be the latest stumble from Nilsson, who had impressed in 1976, his first season with Lotus. His second year with the team had begun awkwardly as he struggled to adapt to the Lotus’ pioneering ground-effect aerodynamics.

Nilsson regularly struggled to qualify in the top 10, while Andretti was competing at the front.

“Gunnar hadn’t been able to understand why he was so much slower than Mario,” said Freddy Petersens, a journalist and compatriot, who was Nilsson’s room-mate – and soul-mate.

“A couple of races earlier, in Spain, the two of us had stayed up until about three in the morning, chatting about his concerns on our hotel balcony. I told him, ‘Look, Mario has been racing for about 150 years and you started approximately yesterday’. I think that relaxed him a bit.”

Trouble had already struck that weekend in Belgium when Nilsson blew an engine in qualifying and was forced to switch to the team’s spare car. He stuck it third on the grid, though, and – reunited with his race chassis – ran a comfortable second as Scheckter edged away on the now-drying track.

On lap 17, it was Scheckter’s turn to err, spinning and ceding the lead to McLaren driver Jochen Mass, who had just overtaken Nilsson.

The drying track was now suited to slicks, and Nilsson joined the line of cars pitting on lap 18, losing significant time from a jammed wheel nut.

It left the Swede in 13th place of the race which was now led by Niki Lauda, thanks to a swift Ferrari pit stop that was heralded as “truly fantastic” in contemporary reports: it had taken just 18 seconds.

The race appeared to settle down but Nilsson was mounting a challenge. He was sixth approaching half distance, just as it began to drizzle. The slippery conditions would suit a Swede in form. “Gunnar simply drove brilliantly that day,” Petersens said. “Everything just clicked.”

Nilsson stormed to third position by lap 36 and was second four laps later, when Mass spun. Still on slicks, he drove with great delicacy through the slippery conditions to catch Lauda on lap 49 and pass him soon afterwards.

He went on to pull away and take victory for the first time. It would be Nilsson’s only Formula 1 win. 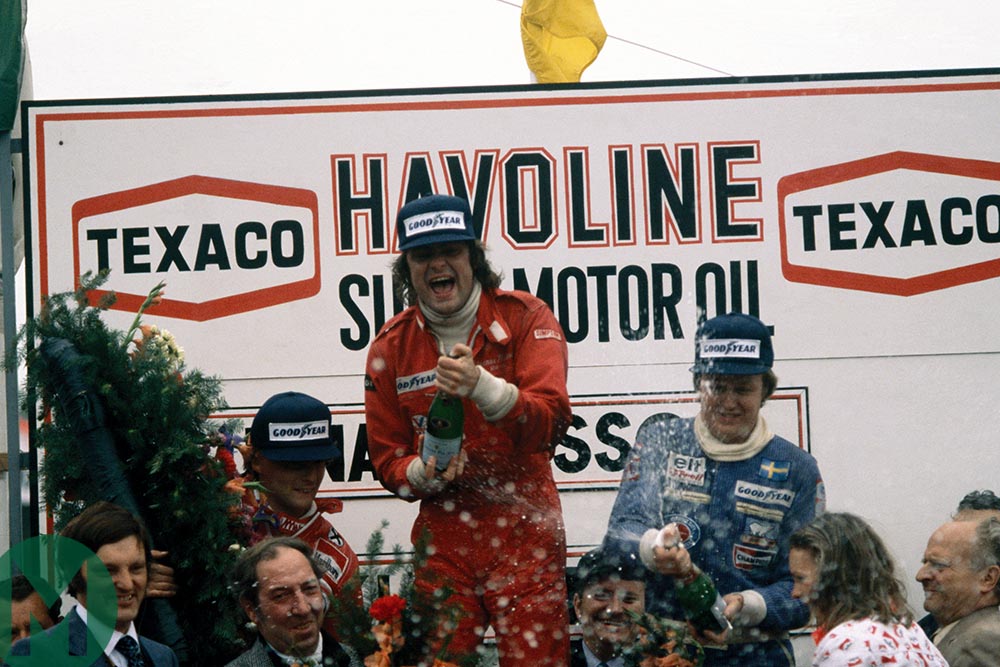 “Adrenaline is a wonderful thing,” said Petersens. “Gunnar was already suffering back pains by then. It didn’t affect him too much during races, but he would be acutely aware of it afterwards. He put it down to an ill-fitting seat, but of course it was the first sign of the cancer that eventually claimed him.”

The Belgians’ copy of the Swedish national anthem kept jamming on the turntable during the post-race ceremony, as the rain returned in earnest, but such prosaic details weren’t about to remove the sheen from the winner’s day.

“He received a congratulatory telegram from the King of Sweden,” said Petersens, “and that evening Gunnar, Mario Andretti and I went out for dinner. The two of them were theoretically bitter rivals, of course, but there was real warmth and friendship between them and Mario was genuinely delighted that Gunnar had broken his duck. He also insisted that Gunnar paid for dinner and said, ‘Freddy, we’re going to have five courses – don’t look at the left-hand side of the menu, just choose whatever is most expensive’.

“Gunnar was always serious about his racing, but he was also a bit of a playboy, too. I think Belgium changed his attitude, though. It was a day of realisation, because he suddenly appreciated that he could beat these other guys. Sadly, we were never to see the fruits of that.”

Nilsson would step on to the podium just once more, at Silverstone later that year, as accidents and poor reliability affected the rest of the season.

He had signed a contract to join Arrows the following year but his cancer intervened, and Nilsson would never drive another Grand Prix. He passed away on October 20 1978, aged 29.