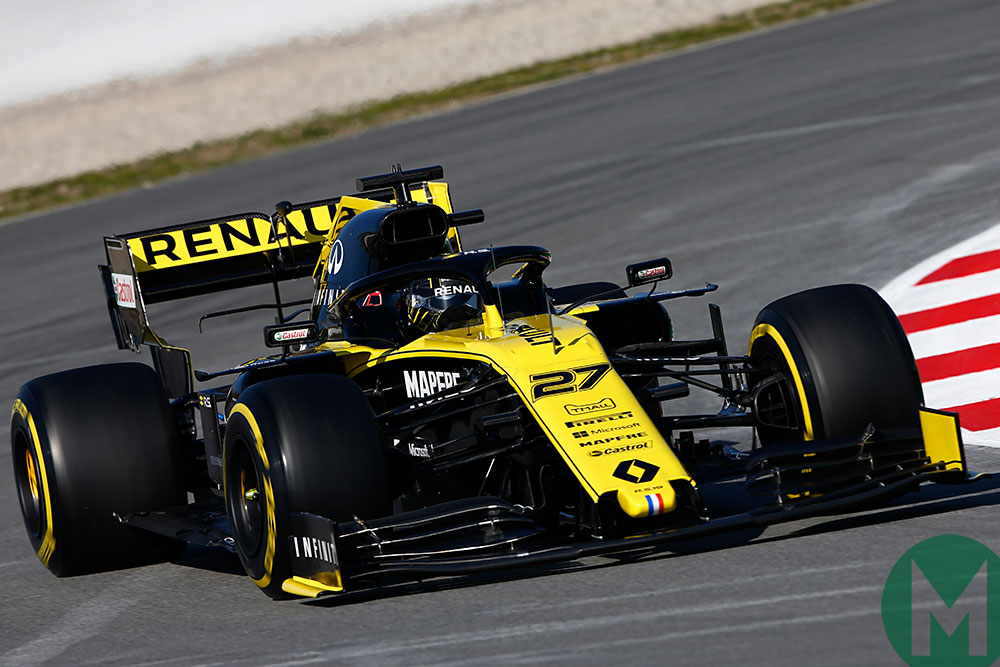 Nico Hülkenberg set the pace for Renault on the final day of Formula 1’s opening four-day 2019 preseason test at Barcelona.

Hülkenberg, once again sharing the day’s running with his team-mate Daniel Ricciardo, leapt to the top of the times with a 1m 17.393sec – the fastest time of the week – on the softest Pirelli C5 tyre compound with just over an hour of the day’s running to go.

His lap knocked long-time pacesetter Alexander Albon off top spot, who continued Toro Rosso’s strong pace after team-mate Daniil Kvyat led the way yesterday. Albon’s best 1m 17.637sec time was set half an hour before lunch and was slightly quicker than Kvyat’s mark from yesterday. Both were set on the C5 compound tyres.

Albon’s mark had in turn bettered Hülkenberg’s team-mate Ricciardo to go top of the times. Ricciardo subsequently set a quicker time on C5 tyres that was 0.148sec off Albon’s, just before handing over the car to Hülkenberg. It meant Ricciardo finished the day third overall.

Mercedes showed strong headline lap time pace following its low profile running across testing’s first three days. Lewis Hamilton traded times with Charles Leclerc’s Ferrari at the top of the pile for a period of the morning, before ending the first session third overall with Mercedes’ first sub 1m 18sec lap of the week, a 1m 17.977sec set on C4 tyres. It also was under Leclerc’s mark by 0.069sec, although Leclerc’s was set on harder C3 rubber.

Mercedes, as it has done every day in this test, split its driving duties and Valtteri Bottas took over the car in the afternoon. He pipped Hamilton’s mark, again on C4 tyres, with a 1m 17.964sec set mid-afternoon, then he set an even better 1m 17.857sec on C5 rubber. This meant the Mercedes duo finished the day fourth and fifth overall, Bottas ahead, leaving Leclerc sixth as he didn’t improve his best time in the afternoon.

McLaren’s Lando Norris caused a red flag early in the day with a bizarre incident in which he left the track at low speed and in cold temperatures and became beached in the gravel. A late improvement meant he finished the day seventh overall with a 1m 18.431sec.

Antonio Giovinazzi was eighth for Alfa Romeo with a 1m 18.511sec best. He topped the mileage charts with 154 laps completed, despite twice causing red flags late on by stopping on track.

Haas also split its driving duties once again and its pair were next up in the order. Romain Grosjean – who was just 0.052sec off Giovinazzi – was 0.157sec quicker than team-mate Kevin Magnussen. Pierre Gasly was 11th for Red Bull with a best time 0.060sec off Magnussen’s.

Williams had its first full day of 2019 testing running after missing all of the first two days as well as Wednesday morning. Robert Kubica drove the car this morning and was slowest of all with a 1m 21.542sec. Kubica said that the FW42 is being run in a “compromised” condition this week.

His team-mate George Russell took over in the afternoon dipped under Kubica’s time, setting a 1m 20.977. But it was still 1.3sec off the fastest non-Williams, Lance Stroll in the Racing Point.

The second four-day test of two takes place from February 26 to March 1, with the opening race of the season at Melbourne on March 17.