The situation might have looked hopeless to Lewis Hamilton, dropped to the back of the sprint race after qualifying first, for a rear wing infraction, and facing a five-place drop in tomorrow’s Brazilian Grand Prix for taking a new engine.

But by the first corner of the sprint race, the reigning champion had already shown that he wasn’t going to go down without a fight, having gained four places as he began a relentless charge towards the front, which would end with him finishing fifth.

At the opposite end of the grid, his team-mate Valtteri Bottas had title rival Max Verstappen in check, the soft-tyred Mercedes out-dragging the Red Bull at the start and holding on to the lead throughout the 24-lap race, although Verstappen still increased his championship advantage by two points.

Ferrari impressed too; Carlos Sainz gambling on soft tyres to run second at one point and finishing third, while Lando Norris starts a handy fifth in tomorrow’s race. 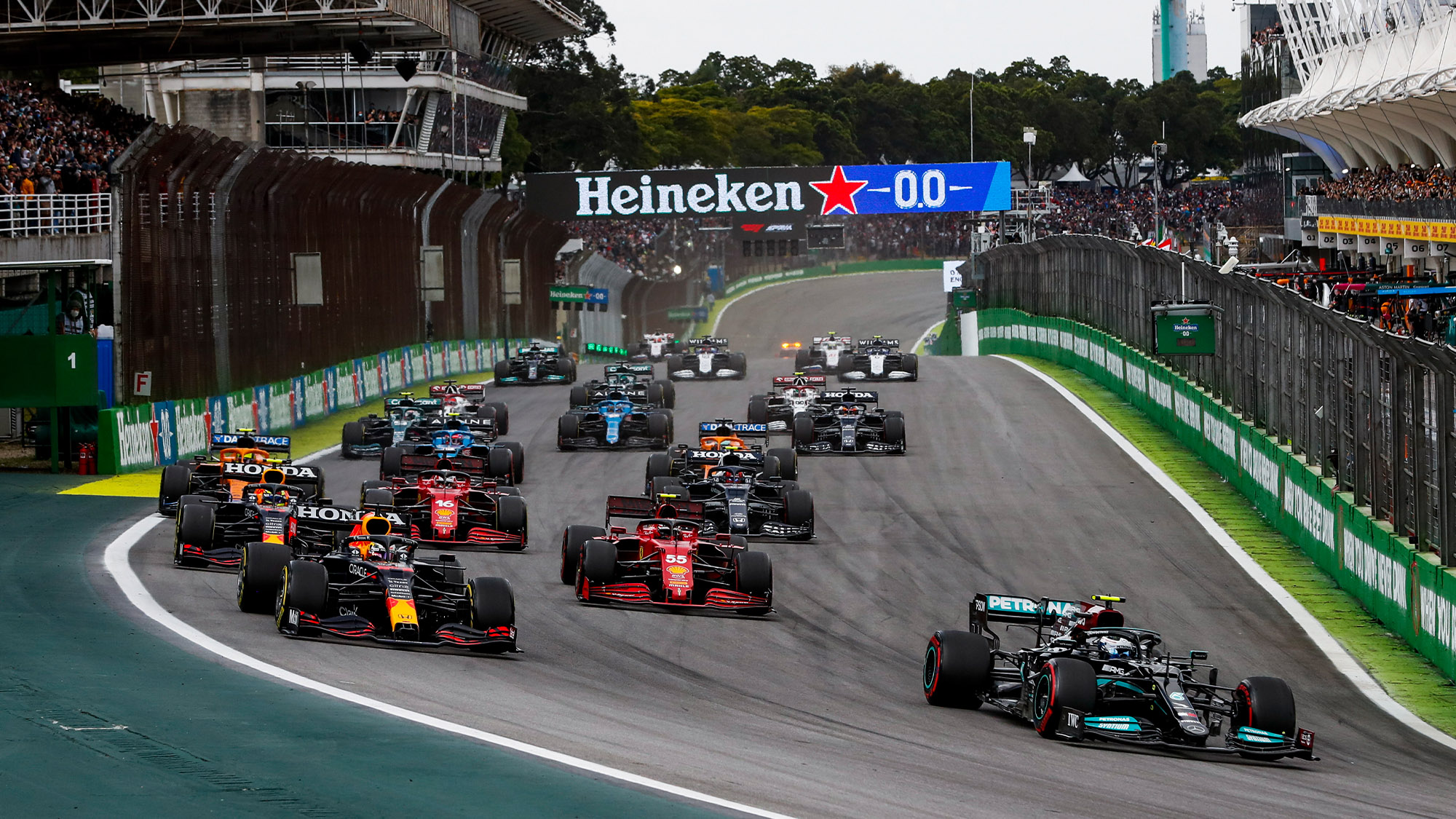 Bottas took the lead at the start with soft tyres

After Hamilton’s demotion, Max Verstappen started first on medium tyres but Valtteri Bottas, alongside him opted for softs and they paid dividends at the start, as the Finn surged into the lead and was first into Turn 1.

Carlos Sainz also used soft tyres to make big gains at the start, going from fifth to third and immediately putting the pressure on Verstappen, pulling alongside the red Bull and taking the inside line for Turn 4.

The cars were side by side and Verstappen ran off wide and rejoined behind the Ferrari. Behind him, a similar situation was unfolding with Perez on the inside of Leclerc, who was attempting to pass on the outside but had to settle for fourth behind Perez.

Kimi Räikkönen began the sprint in a fight with team-mate Antonio Giovinazzi for 11th. He tried to go around the outside on turn 1 at the start of lap 2, but clipped the other Alfa, spun and dropped to 18th.

Verstappen was complaining of gear sync problems, but his pace didn’t seem to suffer, as he went down the inside of Sainz into Turn 1 at the start of lap 4. Bottas had a lead of over 2sec.

Behind, Lewis Hamilton moved past Yuki Tsunoda for 13th and immediately started to put pressure on Giovinazzi. He was past by lap 6, setting the fastest lap in the process.

Verstappen was pulling away from Sainz and was 3.5sec ahead on lap 7 when the Spaniard starting complaining about his soft tyres. Verstappen was also closing the gap to Bottas, bringing it to below 2sec.

Lewis Hamilton continued to cut through the field, taking Alonso at Turn 1 at the start of lap 8.

Lando Norris tried to capitalise on the Turn 1 trend but couldn’t sneak up the inside of Leclerc on lap 9. The Ferrari held him off but could do nothing about the McLaren on the run to Turn 4, as Norris went up into fifth.

Struggling Sainz was having to fend off Perez by lap 10, as Hamilton closed up on Daniel Ricciardo; the pair 18sec off the lead.

It took the champion three laps to get the job done and he finally blasted past the Mercedes-engined McLaren on the start-finish straight to get into the top ten, with Vettel, his next target, dispatched on lap 15.

With ten laps to go, Verstappen was within DRS range of Bottas and pressurising the Mercedes; the pair lapping 15sec ahead of Sainz.

Lap 16 brought another scalp for Mercedes as he once again used the run to Turn 1 to pass Ocon for eighth, followed by Gasly on lap 17. 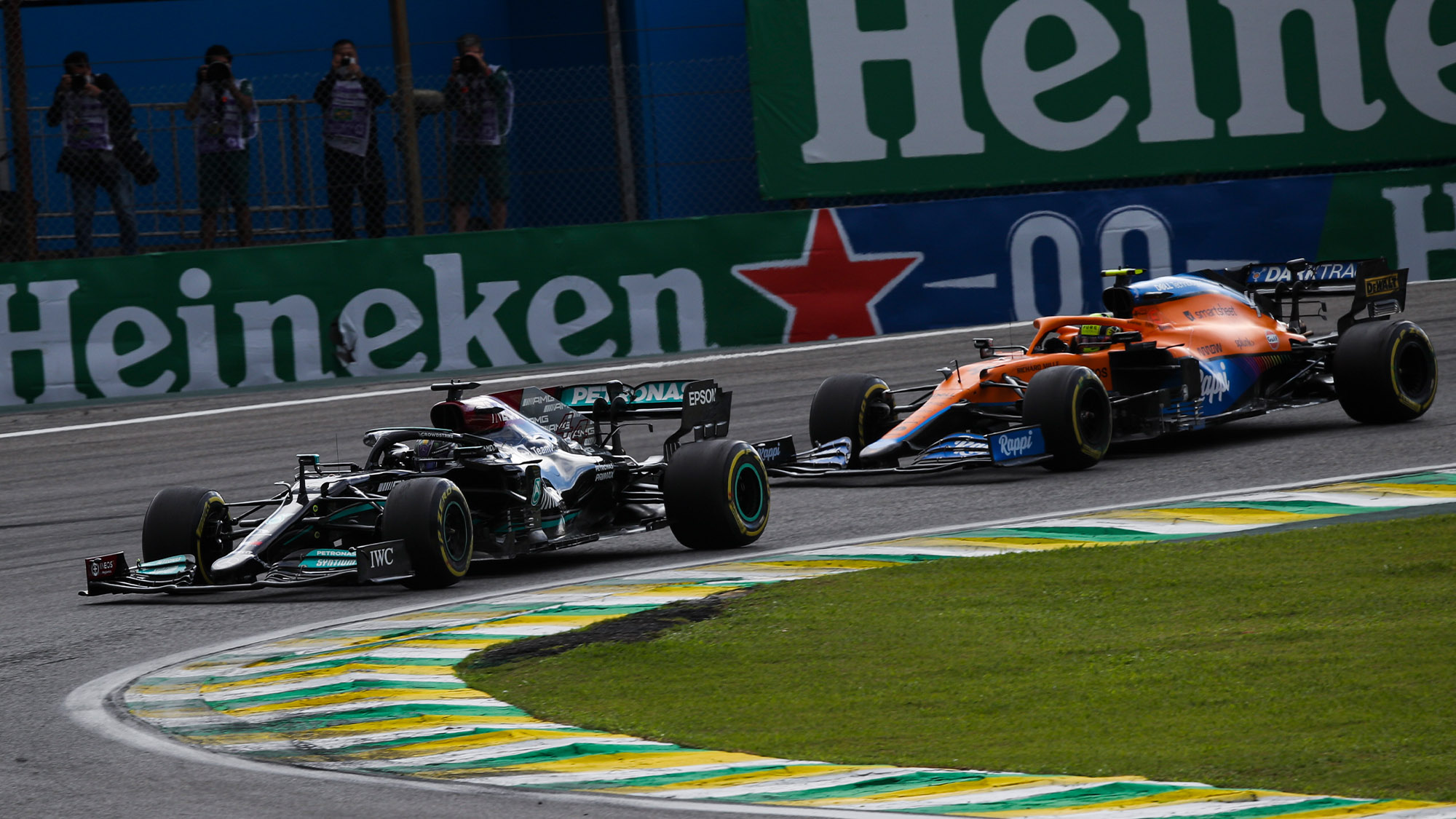 Sainz was back on the radio, complaining “my tyres are going” on lap 18, with six to go. Bottas, with his soft tyres, was managing to keep Verstappen at bay, though. The Dutchman lurked around a second behind the Mercedes.

Perez was told of Sainz’s struggles and had a look on the inside of Turn 1 at the start of lap 20. Sainz closed the door, but behind, Leclerc couldn’t do the same for Hamilton and the Mercedes driver moved into sixth, 22sec behind the leaders but lapping faster than them.

Verstappen moved back into DRS range of Bottas on lap 23, as Perez looked to make a final challenge on Sainz. Hamilton wasn’t done yet either, hooked on to the rear wing of Lando Norris in fifth. A spectacular late lunge into Turn 1 won him the place top put him just 2sec behind Sergio Perez, who had started 17 places ahead.

Verstappen couldn’t mount another challenge to Bottas and followed the Finn home on lap 24, 19sec ahead of Sainz in third and only 21 ahead of Hamilton.

“I honestly had no idea what was possible,” said Hamilton at the end of the race. What can he do tomorrow from 10th, with a lot more laps at his disposal?