It finally happened as Max Verstappen and Lewis Hamilton came to blows on the opening lap of the British Grand Prix but the drama was far from over.

The title contenders had diced for half of the opening lap with the Mercedes driver attacking and several close moments between them before the incident and red flag.

Charles Leclerc led all the way following the restart but a resurgent Hamilton would not be denied.

Metronomic fastest laps obliterated the Ferrari driver’s lead and another Copse moment went in Hamilton’s favour, as he took an incredible home victory despite a 10-second time penalty.

Hamilton was able to get the better start as Verstappen had done the day before in the sprint qualifying race but the Red Bull driver was able to retain his lead.

Onto the old pit straight, Hamilton benefitted from a great tow and looked to the inside line but tyre-to-tyre contact pitched the Red Bull into the barriers at Copse violently, winding Verstappen as a result.

Charles Leclerc, who’d already overtaken Valtteri Bottas at the start took the lead of the race on the run into Maggots and Becketts. After an immediate safety car, the race was red-flagged on lap three for barrier repairs while Verstappen extracted himself from the car.

Both Mercedes and Red Bull pleaded their cases to race director Michael Masi who was blunt in his reponses to both as the agonising wait for a decision went on during the stoppage. Hamilton was assigned a 10-second time penalty after racing had resumed. 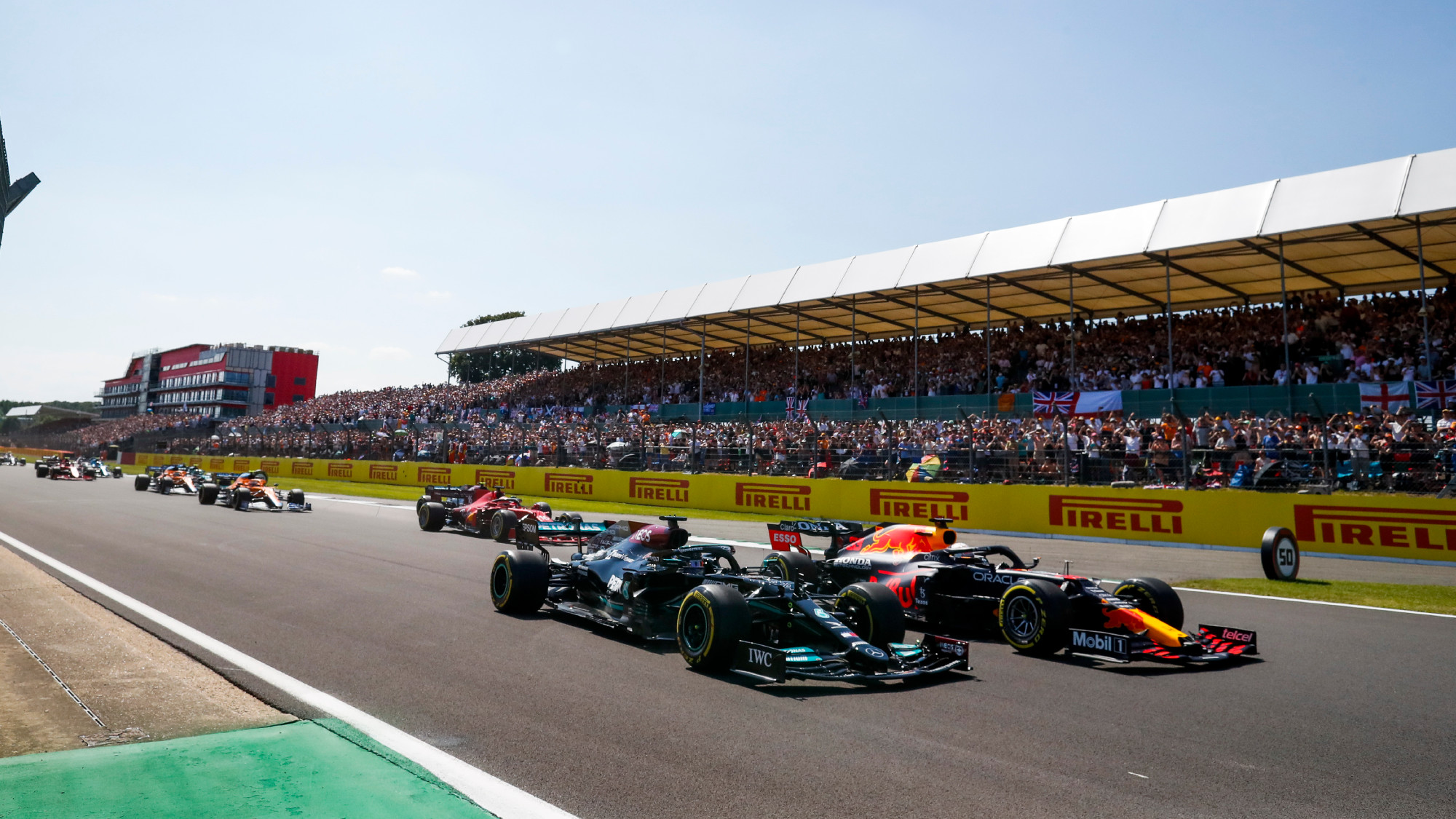 Hamilton and Verstappen collided at Copse on the opening lap

The race restart came 45 minutes after the initial lights out. Leclerc took up the pole grid slot ahead of Hamilton, Bottas, Lando Norris and Daniel Ricciardo.

Leclerc took the lead at Turn One while Lando Norris got the jump on Bottas for third place. Fernando Alonso pinched sixth from Vettel after losing out on the initial start. The Aston Martin driver took that back though Brooklands but spun on the exit of Luffield, falling to last place.

The Alpine driver tried a move at Copse on Ricciardo around the outside and got the move done off track. He immediately gave it up though, opting against risking a penalty.

Just as the first lap under racing conditions finished, Hamilton was handed his 10-sec time penalty for the crash with Verstappen.

Carlos Sainz was the next driver on the move, taking sixth from Alonso around the outside of Brooklands on lap six.

In clear air, Leclerc was able to build a 2sec gap to the chasing Mercedes with Norris ahead of Bottas, Ricciardo, Sainz, Alonso, Stroll, Ocon and Räikkönen, the latter lucky to survive a big snap of oversteer at Abbey to remain in the top 10.

Hamilton was informed of his penalty and closed the gap to Leclerc to just over 1sec on lap eight but complained his rear tyres were beginning to overheat. 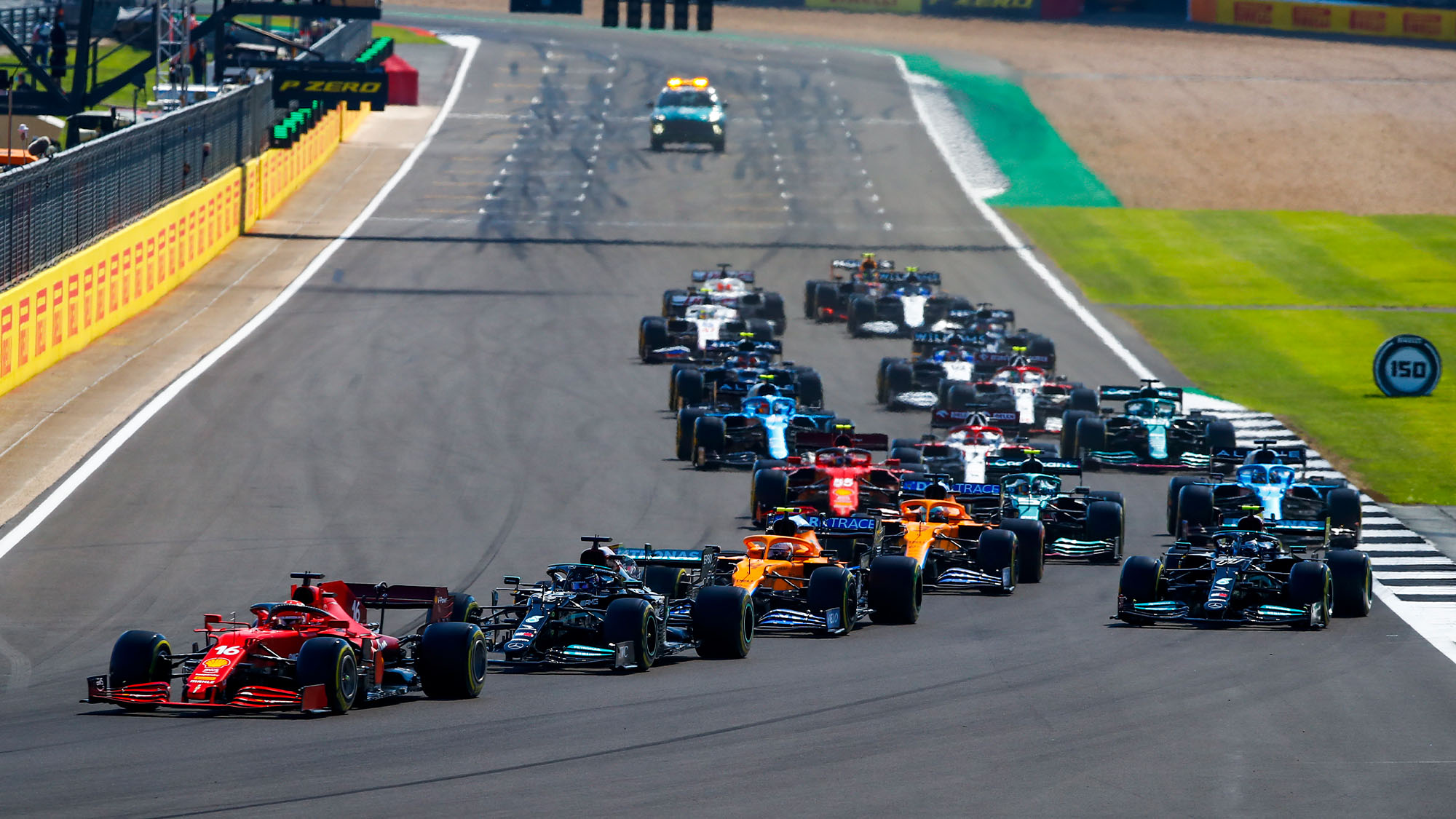 Leclerc leads on the restart

Those with DRS on the driver in front were not making the kinds of gains they’d hope for. Lance Stroll couldn’t get close to a pass on Alonso despite having the gap under one second while Pierre Gasly and Sergio Perez were stuck behind Räikkönen outside of the top 10 in a DRS train.

Hamilton had backed off and let the gap to the leader grow but closed it to 1.1sec on lap 16 but couldn’t break into DRS.

The Ferrari driver though started reporting issues with his engine that allowed the Mercedes to break that bubble entering lap 17. He closed to within DRS range while Bottas did the same on Norris further behind as Mercedes pulled the trigger.

Despite the DRS enabled now, Hamilton couldn’t get within 0.7sec of the Ferrari as some nasty blisters began to open up on his medium tyres. Another boost for the Monégasque was his issue was cleared through a settings change as he retained the race lead.

Perez and Russell pitted on lap 19 but the Red Bull couldn’t jump Räikkönen. The pair battled from Stowe to the Wellington Straight as the Alfa Romeo driver held on to 14th but into Brooklands, the Mexican claimed the place with DRS and was on his way with his fresh medium tyres.

Norris was in on the next lap for the same treatment but a slow stop and uncooperative right rear tyre kept him in the box for longer than he’d hoped. Mercedes responded on the following lap with Bottas on lap 23 and despite a sluggish getaway out of the box, took track position against Norris.

Alonso fed out ahead of both but the Mercedes cleared the Alpine on the Wellington Straight to give himself a bit of breathing room for half a lap. The McLaren driver ducked down the inside at Vale to put the Finn back in his sights but had lost two seconds in the process.

Alonso made his stop on the next lap but had lost out to Stroll through the stops after a slightly slow stop. It took him just three corners to put the Aston Martin in his mirrors though, retaking ninth position on the road on lap 26 into Brooklands.

Hamilton came in for his stop and penalty on lap 28. He fed back into fifth position behind Bottas and Norris. 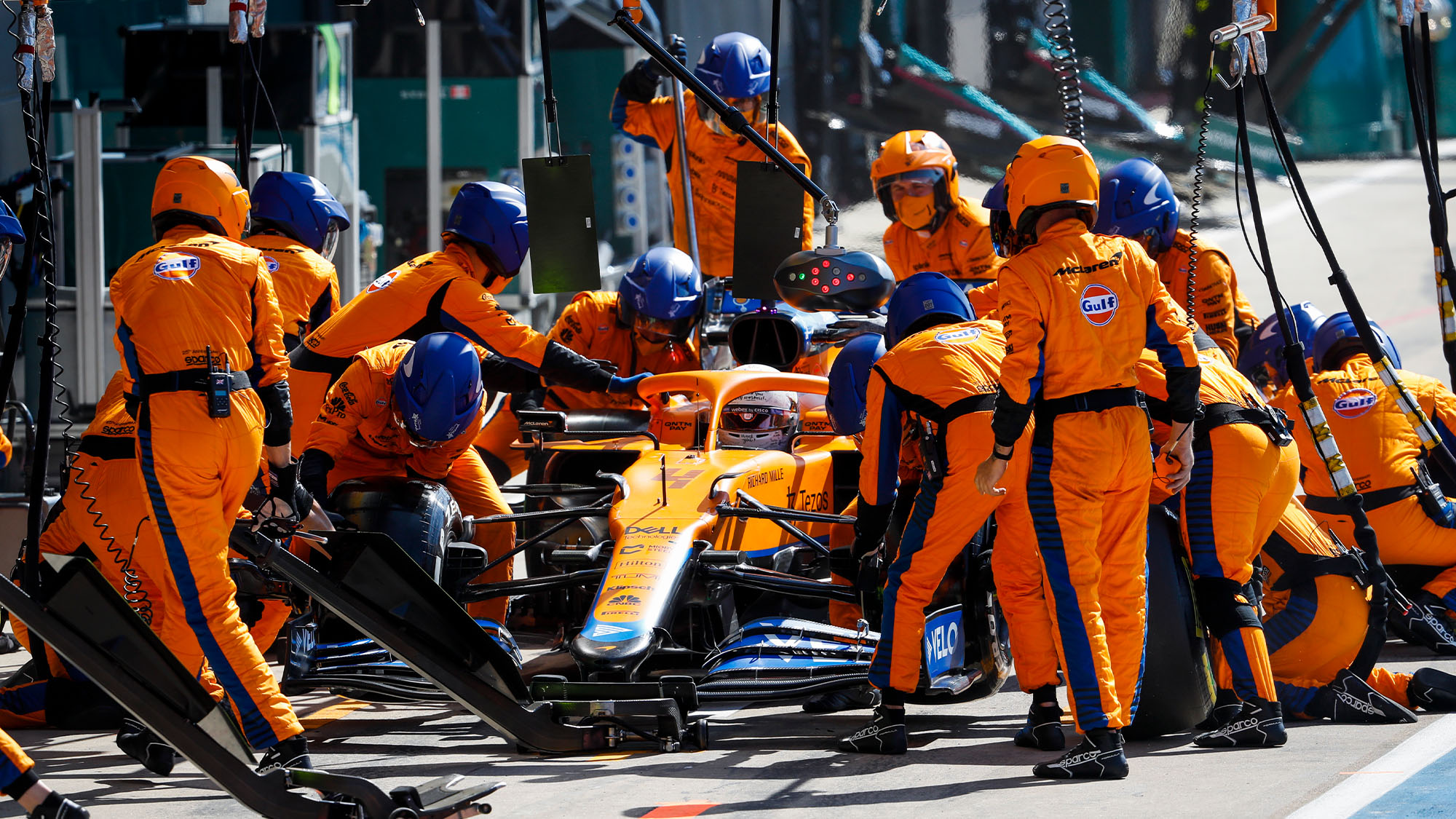 A slow stop cost Norris, dropping him behind Valtteri Bottas

The penalty took Hamilton out of undercut threat for Leclerc and Ferrari opted to pit Sainz on the following lap. It was a nightmare stop for the Spaniard though and he was stationary for almost the same time Hamilton was sans-penalty. The front left was eventually fitted and he was on his way.

Leclerc was in on lap 30 from the lead and had no such issues in his stop. He retained his lead comfortably with Bottas the pursuing party now.

Hamilton was 1.4sec quicker than Norris on the same lap to move to within 1.2sec of the McLaren driver on track.

Lap 31 and he was into DRS range. Out of Luffield, he got another great run but this time when he moved to the inside heading for Copse, Norris relented and Hamilton took third place comfortably.

With one Ferrari well clear, the other was doing the chasing as Sainz attempted to claw back fifth place from Ricciardo.

He was into DRS range on lap 34 but once more, struggled to make an impression on the McLaren.

Bottas reported he was struggling on his hard tyres and was suffering with sizeable blisters on his front right tyre on. He reported he’d struggle to maintain pace to the end on lap 38.

Perez bailed into the pits on lap 39 after spending an eternity stuck behind Stroll and switched onto fresh mediums. He rolled back out onto track in 17th place behind Vettel. He made light work of the Aston into Brooklands with DRS and set his sights on Latifi and Giovinazzi ahead.

Mercedes informed Bottas on lap 40 that he was to move aside for his team-mate as the gap fell to below 2sec. He let Hamilton through into Stowe on the same lap.

Vettel’s miserable afternoon was over on lap 41 as Aston Martin retired him from the race. 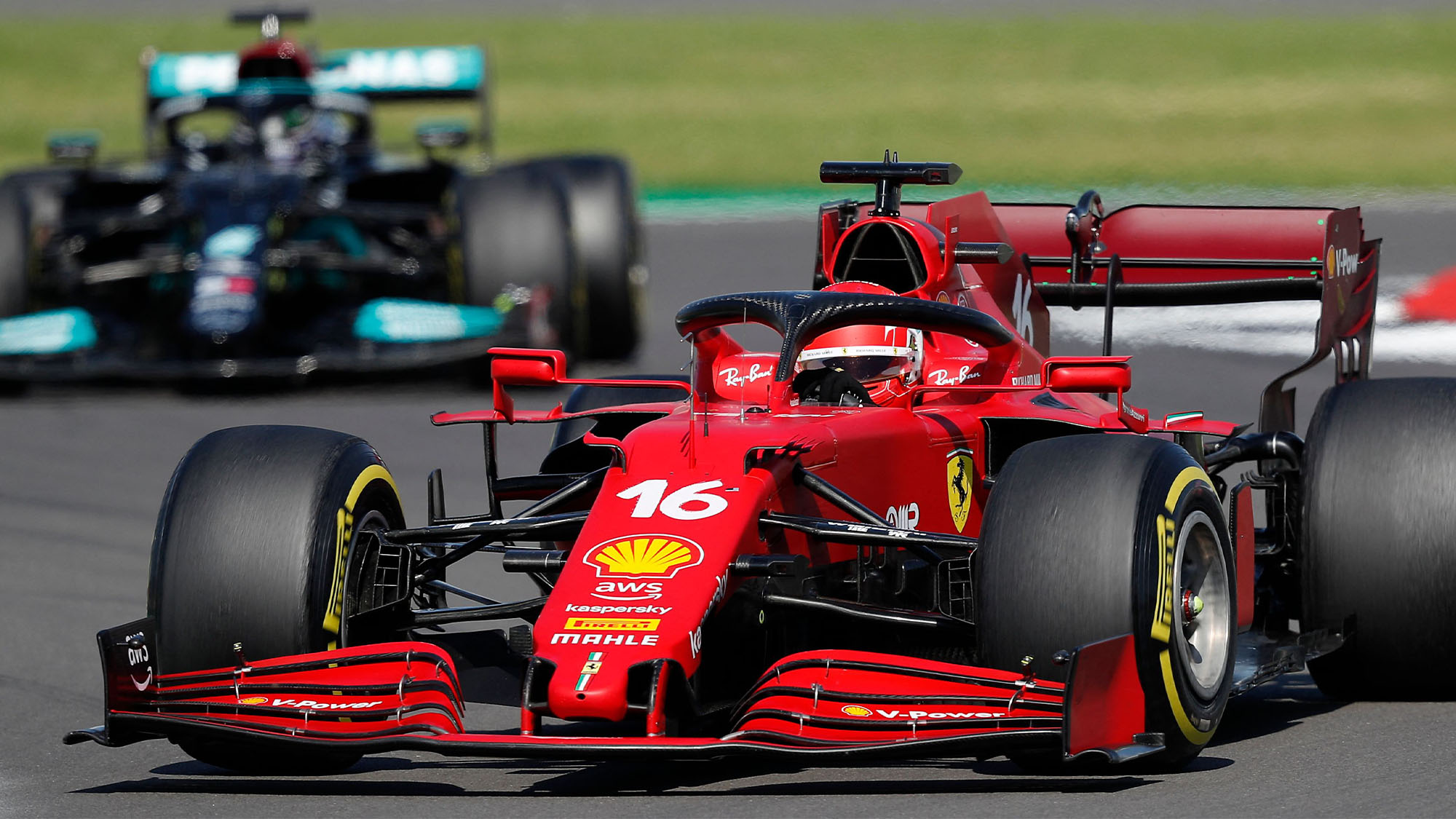 Hamiton scythed into Leclerc’s lead in the closing stages

Hamilton started making immediate gains on the leader, with Bottas told to stick close with predictions putting the lead Merc on the gearbox of the Ferrari before the end.

A lap almost a full second quicker than the leader on tour 43 put Ferrari on alert and Leclerc was given a race engine mode for the remaining laps.

Hamilton put in another fastest lap on lap 45 to close to within 5sec of the lead while Perez was up to 12th but found himself stuck behind Räikkönen once again.

Fastest lap on 46 put the Mercedes within 3.8sec of the Ferrari as the British crowds roared him on.

Lap 47 and he chopped the lead down by another full second.

Räikkönen spun at Vale after a close fight with Perez and filled in right ahead of the race leader. The Alfa quickly let both go with the gap for the win under 2sec with five laps remaining.

Entering lap 50 the gap was 0.8sec and Hamilton was well within range of the win.

Into Copse Hamilton had the the inside line again but this time backed out of the move, Leclerc suffered a wiggle on corner exit and lost the lead of the race to Hamilton.

A standing ovation welcomed Hamilton across the line for yet another British Grand Prix and 99th career victory to close the championship to just seven points.