Lewis Hamilton has said that his initial idea for The Hamilton Commission came from looking at Mercedes’ 2019 end of year team photographs and noticing the lack of ethnic diversity within the Brackley squad.

Led by Hamilton, the 10-month research period culminated in the report released on Tuesday, entitled Accelerating Change: Improving Representation of Black People in UK Motorsport. It reveals fundamental issues causing a lack of representation for Black people in UK motor sport and sets out 10 points to address these issues.

Speaking ahead of the British Grand Prix, Hamilton revealed both how the concept initially originated and then developed from there.

“The key is that this commission really does something; the findings aren’t left on a shelf”

“The idea came to mind at the end of 2019, as I noticed at the end of the year all the team photos,” he said. “I zoomed in on these photos and realised the incredible lack of diversity with it.”

“So I came up with this idea to put this Commission together, and then by the time we were just about to action, it was just when everything happened with George and the Black Lives Matter movement. So [the] timing really was on our side in that sense.”

The reigning World Champion then explained the development process of the research from there and how he hopes for it to be implemented.

“It’s been a long 10 months of studying, learning. The findings have been really interesting, not only just affecting the industry but also going all the way down to some systemic issues that are in education,” he said. 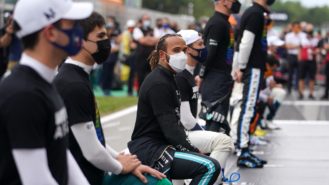 “I have a great team of people, so there’s a huge amount of work that that went on in the background. A lot of calls, a lot of Zooms with the Royal Academy of Engineering behind the scenes, with four meetings where the whole Commission group came together. We were on there like for four or five hours I think, it was just spitballing, coming up with discussing ideas.

“I really wanted to keep an ear on the ground because it was a lot of information. Obviously I can’t do it on a race weekend, so I have people who are working incredibly hard in the background to make sure it’s communicated to me also.

“When it came to narrowing down. We could have had 40 recommendations but it would be impossible to set 40 off. So we had to narrow it down, and I was very much part of that, rounding down to the most efficient ones or the ones that we feel that could have the biggest impact.”

The seven-time F1 champ articulated he wants to see real action effected by the report.

“The key for me was really to make sure that this is a commission that actually really does something, [that] it’s not just findings that end up being on a shelf. So, working closely with Stefano [Domenicali], we’ve already seen some of the stuff that Formula 1 are doing, so hopefully these findings– there’s 100-plus pages, so there’s a lot of detail in there – can help F1 do a better job and be more efficient with where they’re putting their efforts towards, working with Stefano with Jean [Todt] and his team, and me personally.”

Hamilton also described his own difficulties in education, including a period when he was mistakenly expelled from school — subsequently being cleared of any wrongdoing. He also spoke of his growing pains in expressing himself within the pressure of the F1 bubble, explaining how that lent further motivation to the drive for equality he hopes the report could help deliver.

“One of them [the points] for example that was really close to my heart, was I that was wrongfully expelled at school, and I know that young Afro Caribbean kids two and a half times or nearly three times more likely to be expelled [than students of other ethnicities]. I know the impacts of what that is like, so that’s one of the recommendations we have is to address that and provide more support in there.

“I think today, we live in a time where you can people are able to express themselves more. We’re seeing youngsters coming into this sport and able to be more of themselves. I think for me personally, that wasn’t necessarily the feeling when I when I got in, but over time I was able to adjust. I think going back, I would just say ‘Just be you.’ But I think at the time the risk felt so great, that it would stop me from reaching my dreams.”