Lewis Hamilton says he is ready for the challenge of George Russell at Mercedes.

The reigning world champion is expected to be partnered by Russell at the team next season and says that the new wave of talent in the sport can make a big impact, as a younger Hamilton did at McLaren.

While title rival Max Verstappen suggested Hamilton would have a tough time dealing with Russell as his team-mate in 2022, the seven-time champion insisted he was excited by the prospect of a hungry driver arriving alongside him and that he would welcome the challenge next year.

“I’ve raced against some incredible drivers as team-mates. In my rookie year alongside Fernando [Alonso], so I don’t really feel like I have anything to prove,” Hamilton reflected.

Hamilton also picked out fellow Brit Lando Norris as one of the stars of the future. The McLaren driver has consistently improved year after year since his maiden season in F1 back in 2019.

Hamilton publicly praised Norris following qualifying for the Emilia Romagna Grand Prix, a session in which Norris felt he had squandered a potential pole in his final run.

Hamilton said he sees plenty of himself in the younger generation of drivers arriving in Formula 1, adding that should Russell get the seat at Mercedes next season he has high expectations of what’s in store for the team.

“You heard me earlier this year talk about Lando, it’s encouraging to see these athletes come through. I see a lot of myself in the younger generation. 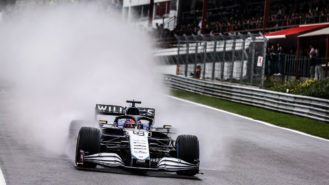 It has never been possible to score Formula 1 World Championship points in qualifying – a corresponding grand prix is always required, even when it amounts to only a handful…

“I think they are what the sport can rely on moving forward so there’ll be things that we learn from one another. I think it’s important that respect is always there and communication will be at the core of that.

“We’ve got an amazing setting at our team in terms of morale, in terms of processes and how the team put their arms around the two drivers. That’s why we have harmony in our team, and I think we’re so much better prepared than we were in previous years.”

While there has been no confirmation of Mercedes’s intentions for next season, indications seem to point to an imminent announcement from the team that Russell will replace Valtteri Bottas at the team next year.

Russell admitted ahead of this weekend that he now knows where he will be racing in 2022 though offered no concrete answers over where exactly he will be.

Bottas said there was no news to share just yet on his future but Hamilton hinted that Russell would be the future of Mercedes in F1 and that their partnership would remain harmonious.

“I honestly think it’d be good. I think George is an incredibly talented driver, clearly. I would say probably the only highlight from last week was his qualifying lap, which was amazing.

“He’s humble. I think he’s got a great approach, and being British I would imagine probably helps in terms of communication.

“Naturally, I have to be super, super supportive the team-mate that I have right now so that’s why I’m always supportive of Valtteri because we have a job to do right now and neither of us can win the team championship alone. We have to do it collectively.”

Hamilton went on to describe Russell as “the future”.  “He’s one of the members of the future of the sport so I think he’s already shown incredible driving so far. I’m sure he’s going to continue to grow so where better to do it than in a great team like this?”