Lewis Hamilton has said he does not feel comfortable in regards to Formula 1 visiting a country in Saudi Arabia which has a highly controversial human rights record.

Hamilton has spoken out various times on the approach to equality of a number of countries F1 has visited, including Bahrain and Qatar, saying at the latter that he wished other athletes would speak out more on those issues.

Saudi Arabia is the latest contentious location for a GP, and when questioned during the pre-race press conference, Hamilton was unequivocal on his own beliefs whilst conceding racing there was a chance to shine a light on the subject. 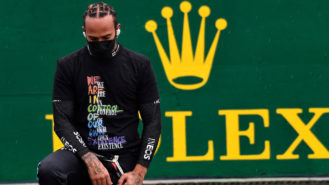 “And whether it’s right or wrong, I think whilst we are here I feel like it’s important that we do try to raise awareness.”

Hamilton also stressed that he would be continuing on with his own show of solidarity as a form of protest.

“In the last race, for example, you saw the [rainbow-coloured crash] helmet that I wore. I will wear that again here, and in the next race because there is an issue in that there’s a law – if anyone wants to take the time to go and read – that is pretty terrifying for the LGBTQ+ community. There are changes that need to be made.”

Hamilton gave a particular case in point for Saudi Arabia where he feels injustice is still prevalent.

“For example, women’s rights – [women] have been able to drive since 2018, [but] it’s how they’re policed,” he said. “Are they really in effect? Some of the women are still in prison for driving many, many years ago, so there’s a lot of change that needs to happen. And I think our sport needs to do more.”

Human rights groups, including Amnesty International, have called on F1 drivers and their teams to speak out against the human rights situation in Saudi Arabia, to avoid the sportswashing effect, where major events can distract from abuses taking place.