Lewis Hamilton took his eighth pole position around the Hungaroring by half-a-second over his title rival Max Verstappen, claiming top spot after backing up both Red Bull’s heavily on his out-lap, resulting Sergio Perez not being able to complete a final run.

Valtteri Bottas made it a Mercedes one-two, with both Red Bulls starting on the soft tyres versus the mediums for their direct rivals.

Pierre Gasly made AlphaTauri best of the rest ahead of both McLaren’s Lando Norris and Ferrari’s Charles Leclerc.

Team-mate Carlos Sainz suffered a crash in Q2 and will line-up 15th.

Here is how qualifying unfolded ahead of the Hungarian Grand Prix. 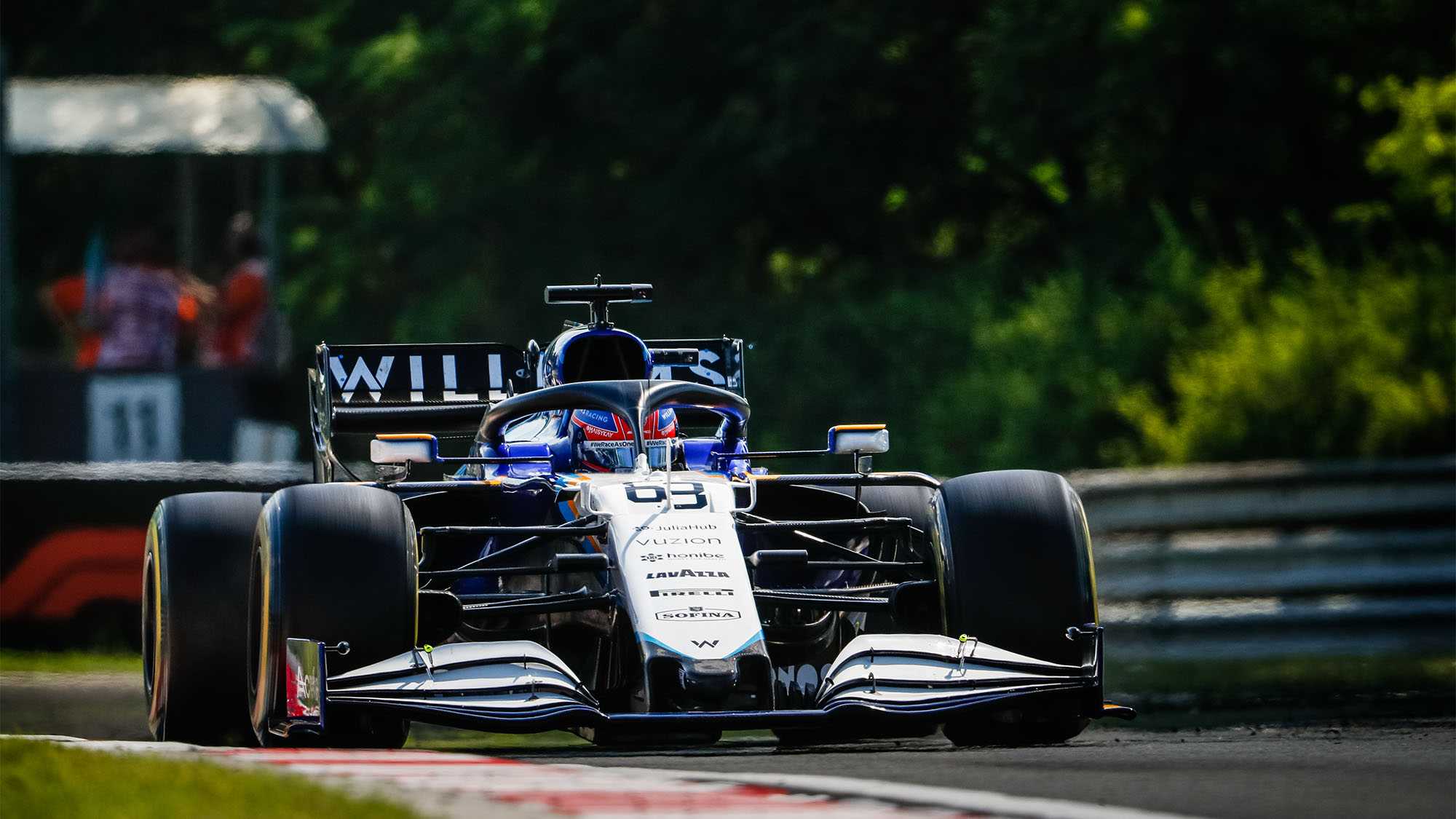 An understeering Williams prevented George Russell from progressing to Q2

Yuki Tsunoda was immediately out as the lights went green for the first qualifying session but it was a slow start. The Alfa Romeo duo and Nikita Mazepin were the only other drivers to join him in the early stages.

Kimi Räikkönen set the initial benchmark as the track started to get busy with 14 minutes left of Q1.

Valtteri Bottas dipped immediately into the 1min 16’s but team-mate Lewis Hamilton lowered the benchmark to a 1min 16.424sec.

While he struggled in FP3, Max Verstappen started on the front foot and lowered that target further to a 1min 16.214sec.

Pierre Gasly climbed above both McLaren drivers on his first effort to go fourth fastest with 10 minutes remaining.

Ferrari retained the advantage over McLaren from practice as Carlos Sainz went into P4 immediately but had a near miss with the AlphaTauri of Gasly on the apex of Turn One. The Ferrari fed out into the path of the Frenchman out of the pit lane and had to climb the kerb to get out of the way.

Sergio Perez was a full second down on his team-mate following his first run and had to go for a second attempt but couldn’t get much closer as he was slumped in ninth.

Ahead of the final runs, Tsunoda, George Russell, Nicholas Latifi and Mazepin were the ones in the drop zone while Mick Schumacher hadn’t set a time following his FP3 shunt and ongoing repairs.

A scruffy first sector cost Russell time and he couldn’t move out of Q1 for the first time this season. Vettel was under pressure but moved into P8 while Ricciardo couldn’t improve his time and left himself under threat.

Luckily for the Australian, he scraped into Q2 in 15th, with Tsunoda, Russell, Latifi, Mazepin and Schumacher the ones knocked out. 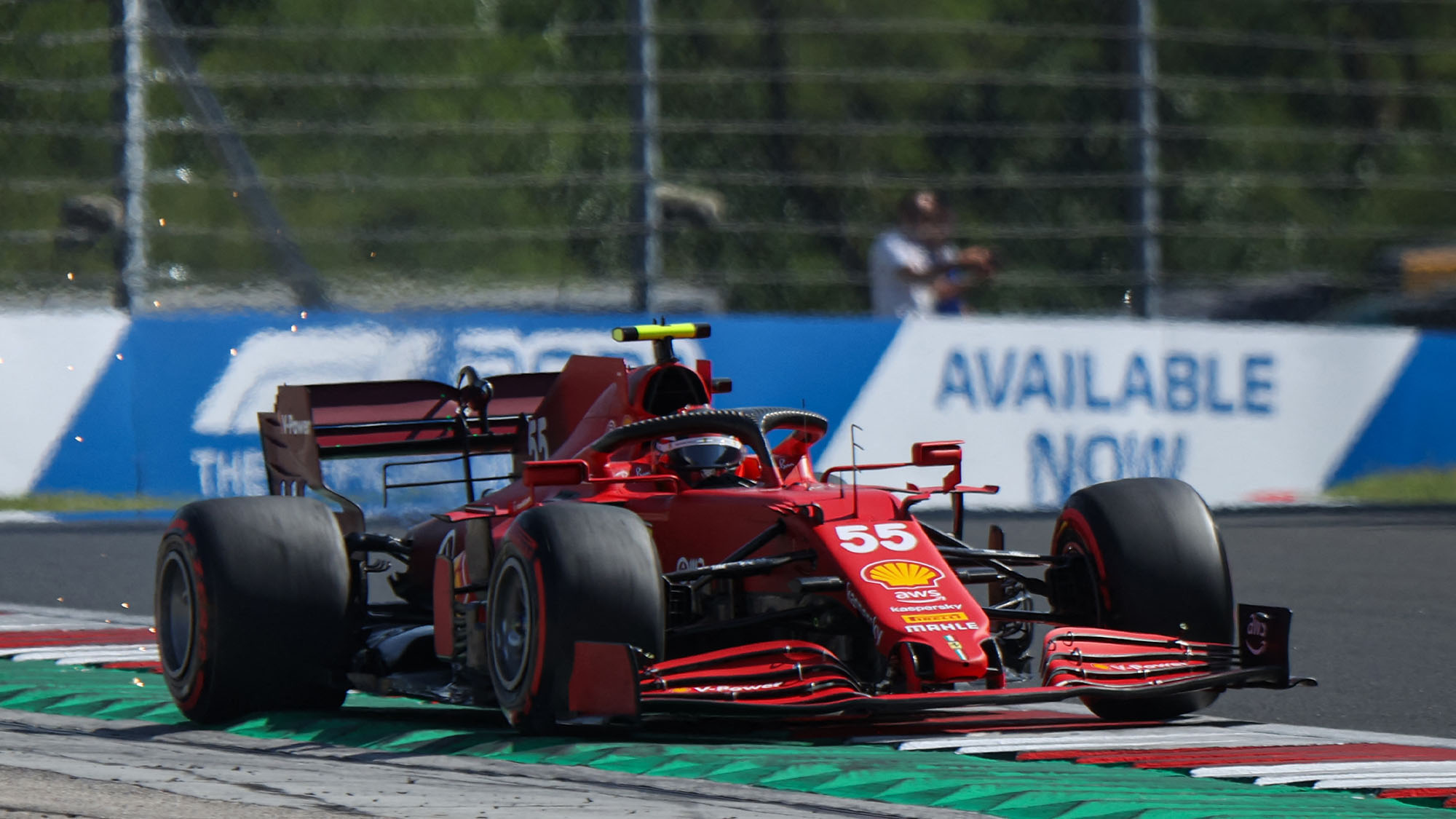 A Q2 crash at the final corner put Carlos Sainz out

Mercedes and Red Bull opted for the medium compound tyres for Q2 with an eye on race strategy for Sunday and were the first four out on track.

Bottas was the first to set a time of the front-runners with a 1min 17.083sec but Hamilton was half-a-second quicker. Despite a quicker first sector, Verstappen slotted into second down by two-tenths while Perez was seven-tenths off the top spot with his lap.

Räikkönen was the first of the soft-tyred runners across the line but some way down though Vettel was able to slot into third with his time. Gasly was marginally slower in fourth while Norris was mired down in seventh with his first attempt.

Fernando Alonso then shot up to third as Alpine times filtered through. Esteban Ocon was 0.4sec down on his team-mate and Charles Leclerc was able to grab second before a red flag was thrown.

Team-mate Carlos Sainz lost his Ferrari at the final corner and slid into the outside tyre barriers, making a sizeable impact side-on. The Spaniard tried to recover back to the pits but his front wing became lodged underneath the car and necessitated a recovery tractor.

A brief delay ended and the session resumed with six minutes remaining but there was no great rush to resume things in the garages with track temperatures peaking at 60 degrees C.

Leclerc was the first back out with 3mins 30 remaining of Q2 while Bottas emerged on fresh mediums and Verstappen resumed on new soft tyres. Hamilton followed suit on the red-walled tyres for a citing lap ahead of the final shootout. Perez gave up the medium-tyre gamble and opted for softs for his last effort.

Bottas’s time put him into second and safely through into the final session. Leclerc then dislodged the Finn from there on his run while Gasly and then Verstappen went fastest in the final moments.

The Red Bull driver’s improvement meant that he will start the race on soft tyres while both Mercedes’ stuck with the mediums.

Alonso moved up to third with his lap as Stroll crossed the line into eighth. Ricciardo pulled out a lap to replace the Canadian.

With improvements from Norris, Perez and Vettel, Ricciardo and Stroll found themselves knocked out of qualifying while Räikkönen out-qualified Antonio Giovinazzi for the third time all season.

Sainz, both Alfa Romeos, Stroll and Ricciardo were the ones to fall out of qualifying in Q2. 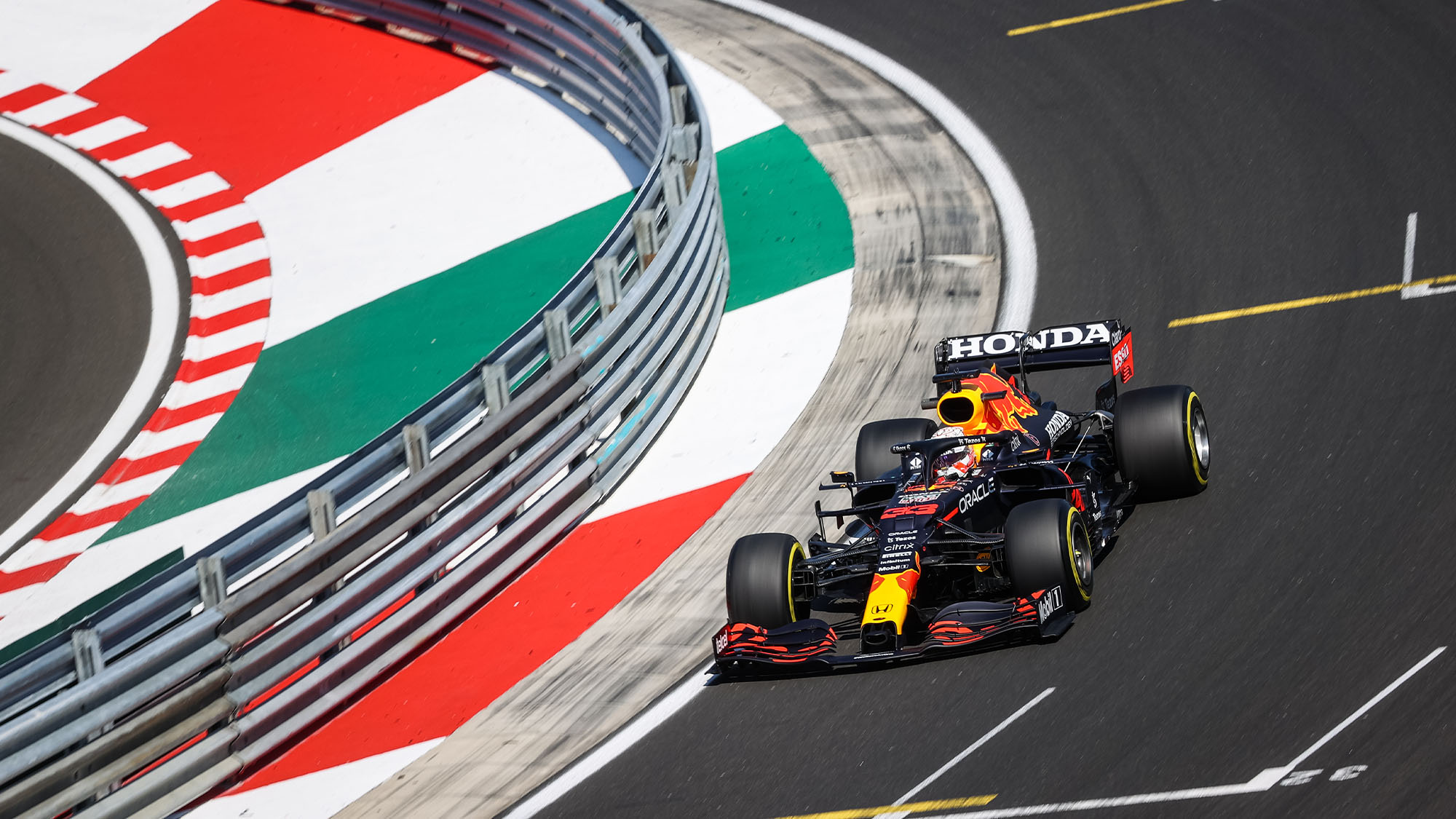 Verstappen could manage no better than third

Gasly led Norris out for Q3 though the McLaren driver opted for scrubbed softs for his first time.

Verstappen headed up the fight for pole in terms of track position. He was followed closely on the out-lap by Bottas with Hamilton and then Perez at the end of the train.

Verstappen set the marker to beat in sector one but Bottas immedaitely bettered it. Hamilton was the quickest of the three through the first third of the lap.

The trend was matched in the middle sector exactly and Verstappen’s 1min 15.9084sec was bettered by both.

Bottas was two-tenths clear until Hamilton crossed the line to go half-a-second quicker than Verstappen and three-tenths clear of his team-mate.

Perez was a full second back in P4 with Leclerc, Ocon, Gasly, Alonso and Norris rounding out the times from those who’d set a lap.

Vettel opted to wait until the track was quiet and set his time in clean air. The Aston Martin driver put in a time good enough for eighth-fastest.

With just under three minutes remaining, the queue reformed as the field made their way back out onto track.

This time, both Mercedes headed up Red Bull in the queue with Bottas leading Hamilton, Verstappen and Perez.

Verstappen was stuck to the gearbox of his title rival on the out-lap as Hamilton put in a very slow warm-up tour.

It resulted in Perez missing the cut to start his lap in time for his final effort while Verstappen made it by a matter of seconds.

Neither championship contender improved in the first sector as the track temperature peaked in the session.

The Red Bull driver completed a personal best in the middle sector but was four-tenths down heading into the final sector.

Nobody could find improvements in the final corners to leave the top four as it was prior to their final efforts.

Gasly shot into fifth ahead of Norris who’d jumped Leclerc as Ocon out-qualified Alonso at Alpine with Vettel rounding out the top 10.