There doesn’t seem to be anything you can throw at either of the championship contenders right now that is going to force them to give up significant points to their rival.

After Lewis Hamilton’s qualifying drama in Brazil, it was Max Verstappen’s turn to be the centre of an investigation this weekend, with his failure to slow for double waved yellow flags on his final Q3 run landing him in hot water.

It’s only fair to point out that Valtteri Bottas and Carlos Sainz were also investigated, with Bottas earning a three-place grid penalty for missing a single waved yellow. It didn’t result in much dissent from Mercedes, as Bottas himself admitted he simply hadn’t seen the flag. Sainz claimed the same, but he slowed when seeing Pierre Gasly’s stricken AlphaTauri and was cleared. 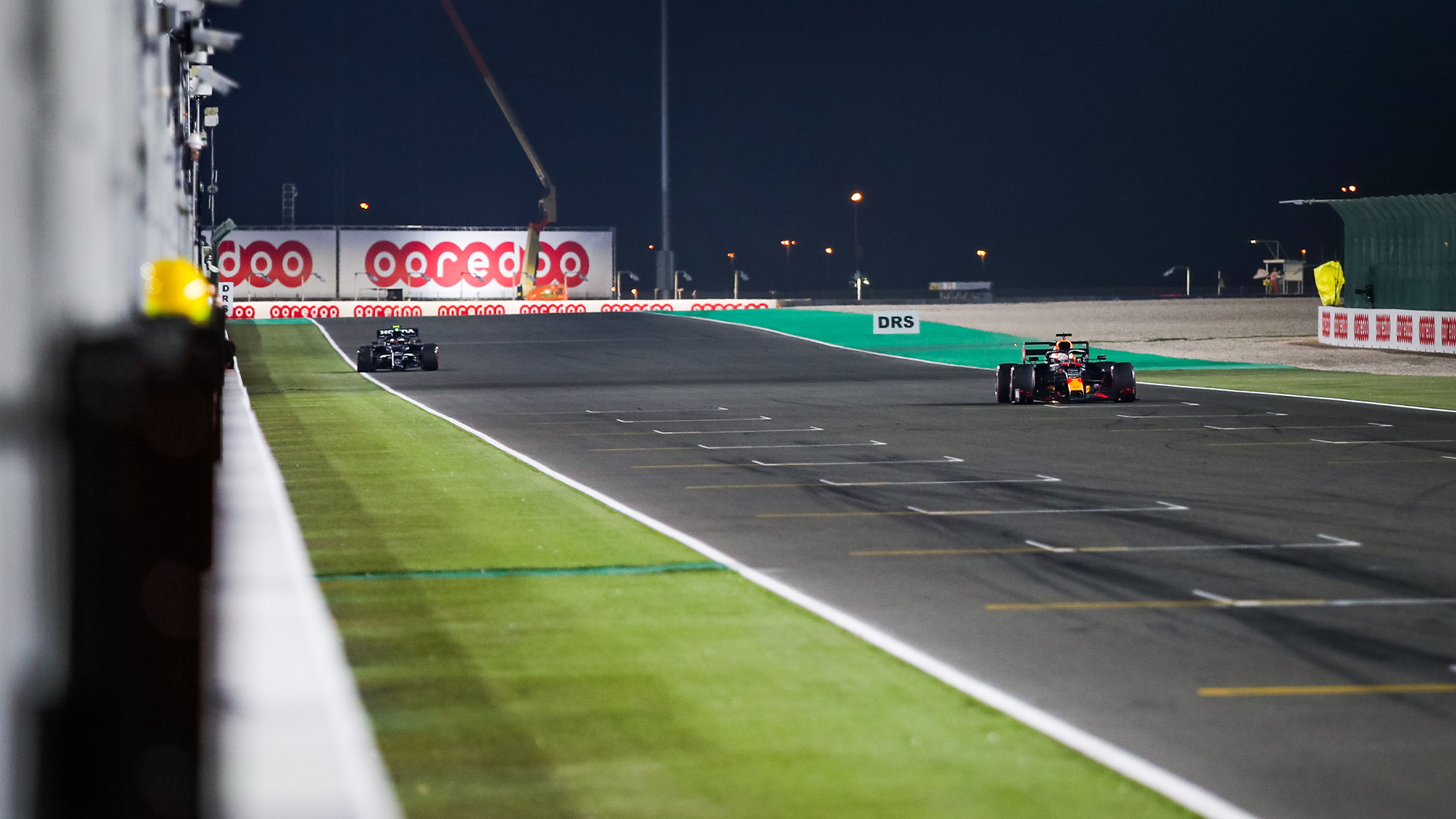 Verstappen, however, had missed a double waved yellow and Red Bull team principal Christian Horner was livid when his drive was demoted five-places on the grid within two hours of the race start.

“We’re really struggling to understand it,” Horner told Sky Sports. “It looks like a complete balls-up. The FIA have effectively said ‘play on, the circuit is safe, it’s clear’. Max was in the first sector, we had so much time to look at it. The dash, everything for him, if indicated otherwise, we would of course, had informed him. 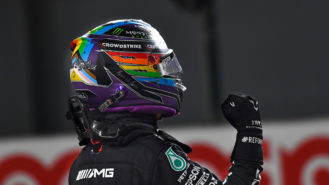 Nineteen down, three to go in one of the most absorbing world championship fights in motorsport history. Coming to Qatar we’d gone from a scenario where the leading two were…

“Unfortunately there’s a yellow flag, he just didn’t see it. He saw the white one (panel), he saw the car, he even saw a green light on the right hand side. I think it’s just a rogue marshal that stuck a flag out. He’s not instructed to by the FIA, they’ve got to have control of the marshals. It’s as simple as that. That’s a crucial blow in the championship for us. We’re now starting P7 at a track you can’t overtake at. That is massive.”

But both Verstappen and Hamilton are making light of “massive” moments in recent weeks, and Qatar was no exception. When the lights went out, Hamilton easily repelled the threat from Gasly and Fernando Alonso – both on softs – to streak away on his medium tyres. And Verstappen duly nailed his own start to cut to the inside and run fourth at the first corner.

It so nearly became third but Fernando Alonso chopped back across the track – seemingly unaware of Verstappen’s progress – ahead of Turn 2, causing the Red Bull driver to take evasive action. 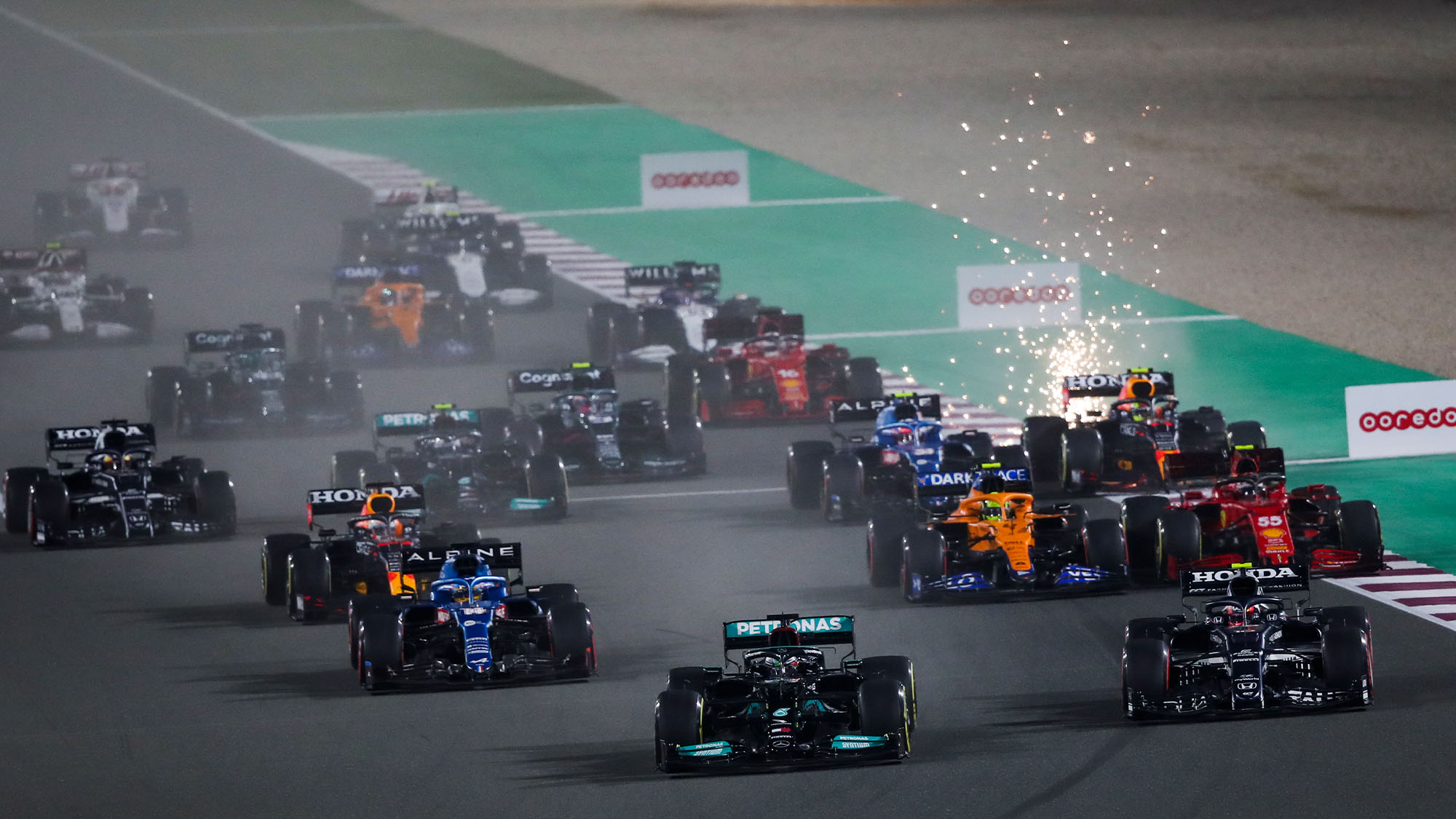 Hamilton consolidated his lead at the start whilst others squabbled behind

Alonso’s move was part of an attack on Gasly that saw the Alpine driver go round the outside of the Frenchman, taking second place but ending the opening lap nearly two seconds behind Hamilton.

It only took until the third lap for Verstappen to radio “A little bit stuck here”, and Gasly conveniently ran wide at the final corner moments later, allowing Verstappen a simple overtake using DRS to take third. Second was then earned in similar fashion on the following lap, but by now Hamilton was already four seconds up the road. 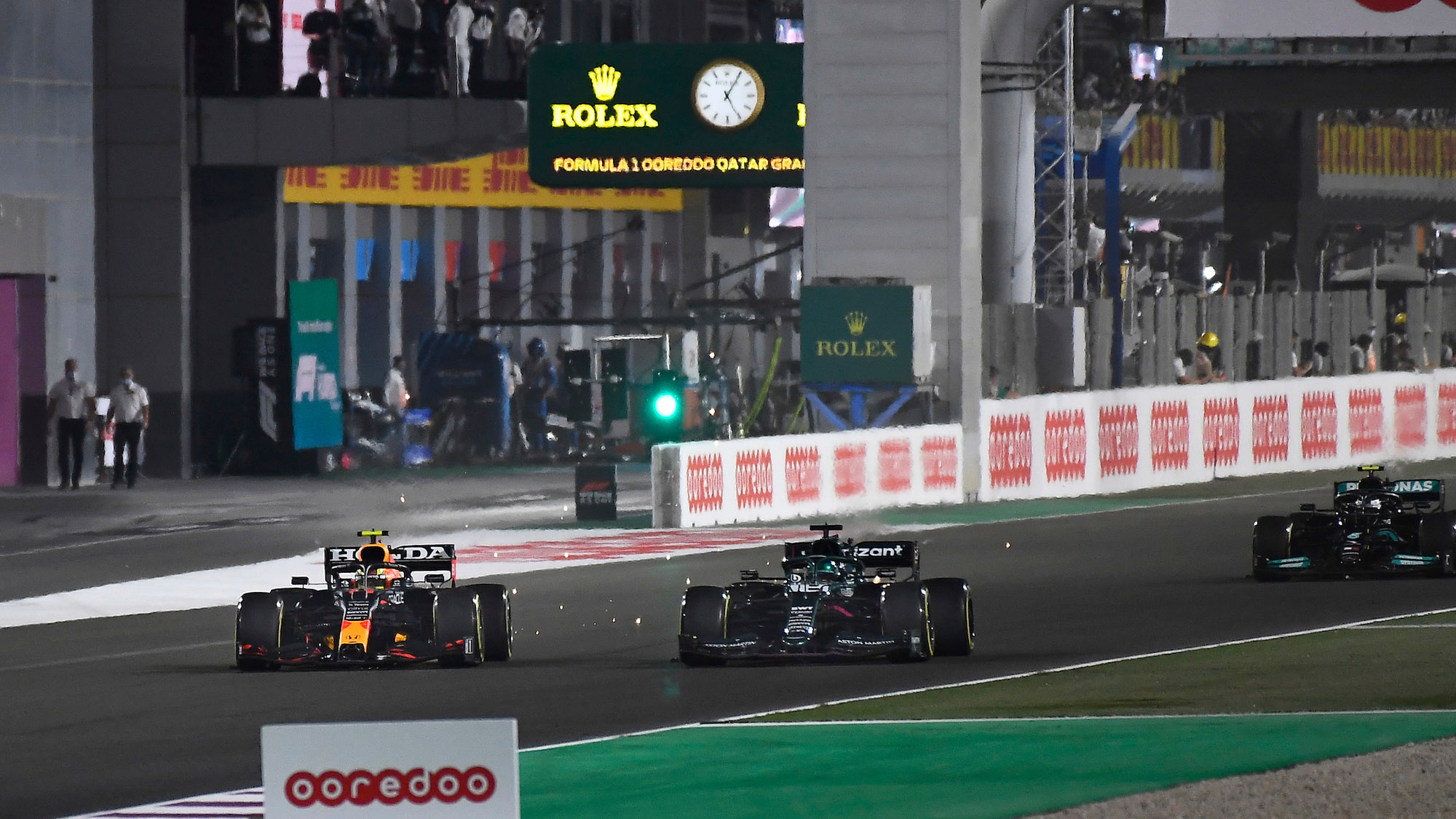 Perez made up places quickly, here overtaking Stroll, while Bottas languished in 11th

It had been a disastrous start for Bottas as he slipped to 11th at Turn 1, while Sergio Perez climbed two places to ninth and set about matching Verstappen’s progress. Yuki Tsunoda, Sainz and Esteban Ocon were dispatched in quick succession, and when Perez cleared Gasly – struggling on his soft tyres – he was fifth by lap 12.

And it was the pair of second drivers that were being watched more closely as Hamilton appeared to have Verstappen comfortably covered off at the front.

Bottas was slower to get going as he looked after his tyres but soon made further progress as he worked his own way past Tsunoda, Lance Stroll, Sainz and Ocon with the latter move coming on lap 17 just as Verstappen triggered the first round of pit stops.

Hamilton covered and Perez followed suit a lap later, with all three switching to hards, but as Bottas continued he was clearly seeking a one-stop strategy. 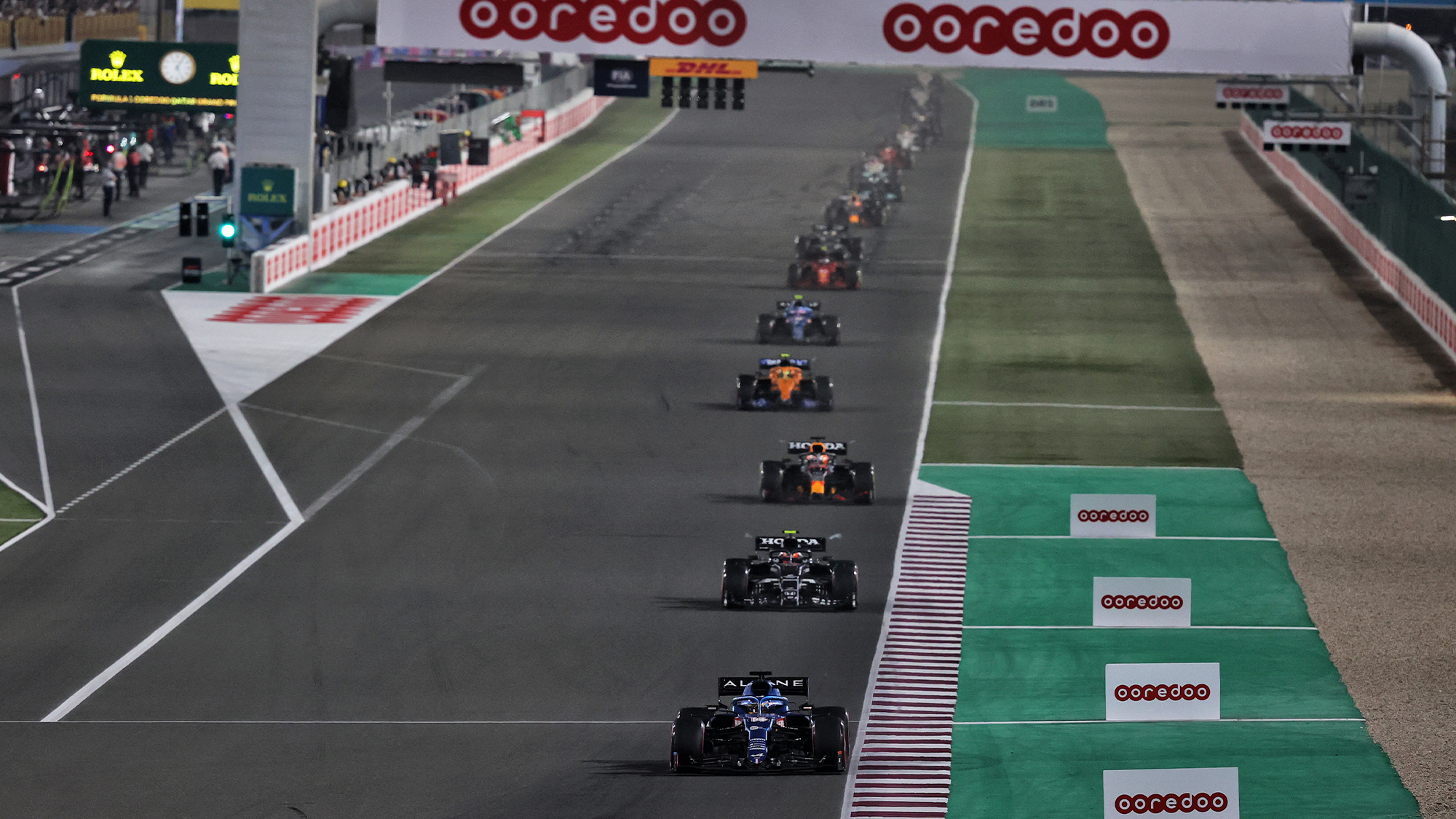 Alonso fell in between the two options, as he stopped for hard tyres on lap 23 and retained position ahead of Perez. He held the Red Bull off for six laps before an entertaining scrap through the first two corners saw Perez take fourth, although by now he was some 20 seconds behind Bottas.

That looked to be a strong position for Mercedes, with the Finn set to enjoy a clear tyre advantage once he made his pit stop. Only he was three laps away from that point when disaster struck, with a front left puncture forcing him to limp round to the pits, damaging his floor and front wing.

Degradation wasn’t an issue but tyre wear was, and Mercedes pushed the mediums too far. It wasn’t the only team to do so as both Williams drivers later suffered failures, but it was the most costly as Bottas was demoted to 14th and later retired.

“I don’t really know what happened, there was no warning, no vibration, the pace was still consistent, grip was still OK and it just happened,” Bottas said. “Initially I thought it was the wind getting stronger down the pit straight, because I felt the car was getting a bit sideways, but then I got the puncture in the first corner and, obviously, it was in the most unlucky point, just after the pit exit.

That made it a three-car race for third once Perez made his second stop – following Verstappen in on lap 41 – partly in response to the failures. That meant Alonso led Norris while Perez had to negotiate Stroll and Ocon before he could set off after the McLaren. 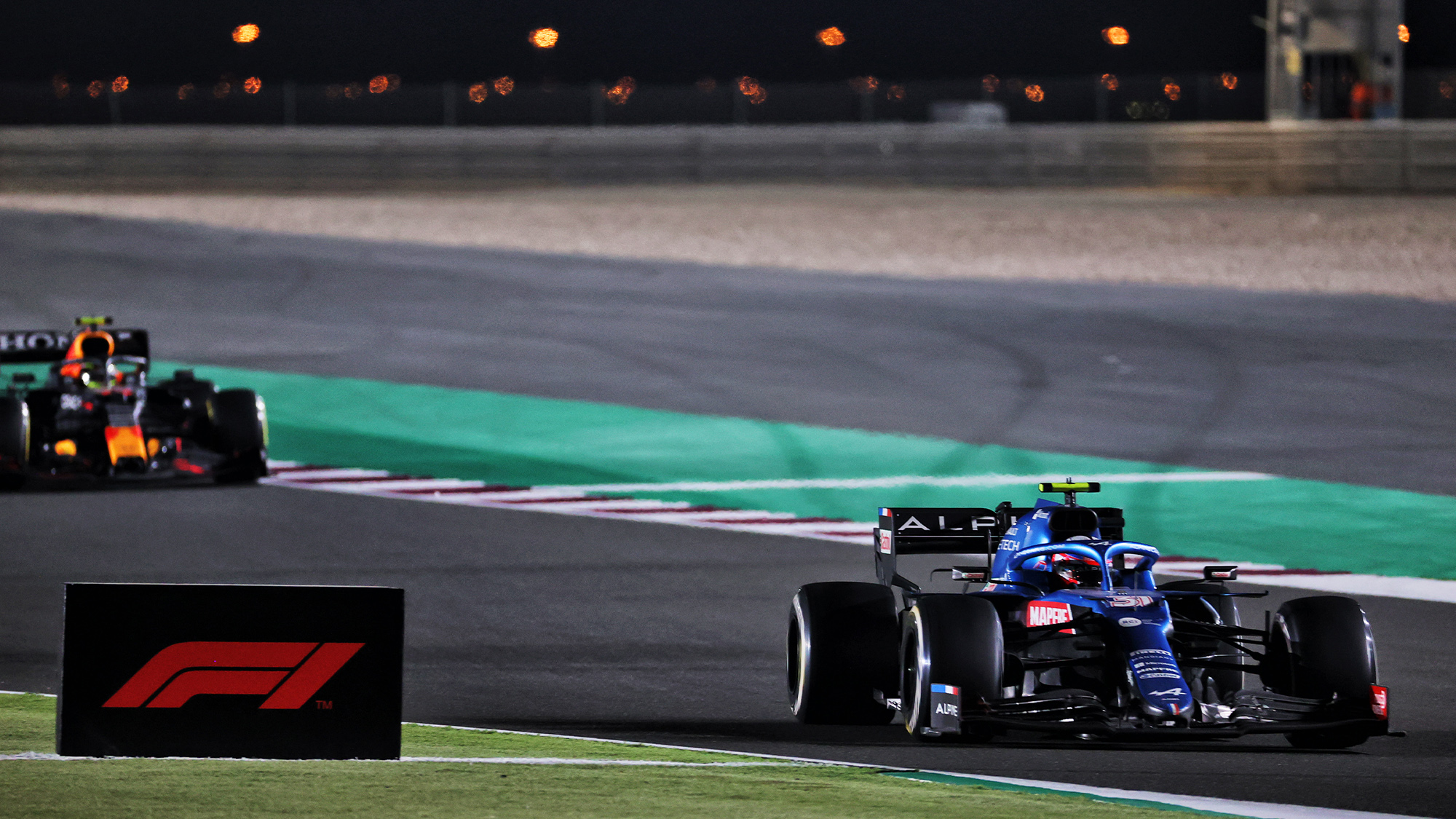 “Tell Esteban to defend like a lion!” Alonso said on team radio, knowing the importance of Perez’s progress being slowed.

“We must defend against Perez, we need to keep Perez behind us as much as we can,” came the radio message to Ocon. “Elbows out.”

But Perez was too quick, fighting Ocon through the first sector after clearing the Aston Martin using DRS, and then working to close an eight-second gap to Norris. But then Norris suffered a puncture and was forced to pit, leaving a clear run at Alonso.

While the double world champion appeared to have the pace to keep Perez at bay, he was asking his tyres to go further than any of those had that failed on the other four cars. But one of those – Nicholas Latifi – suffered his failure out of the final corner and had to park up by a gap in the barrier, leading to a Virtual Safety Car that ended Perez’s hopes. 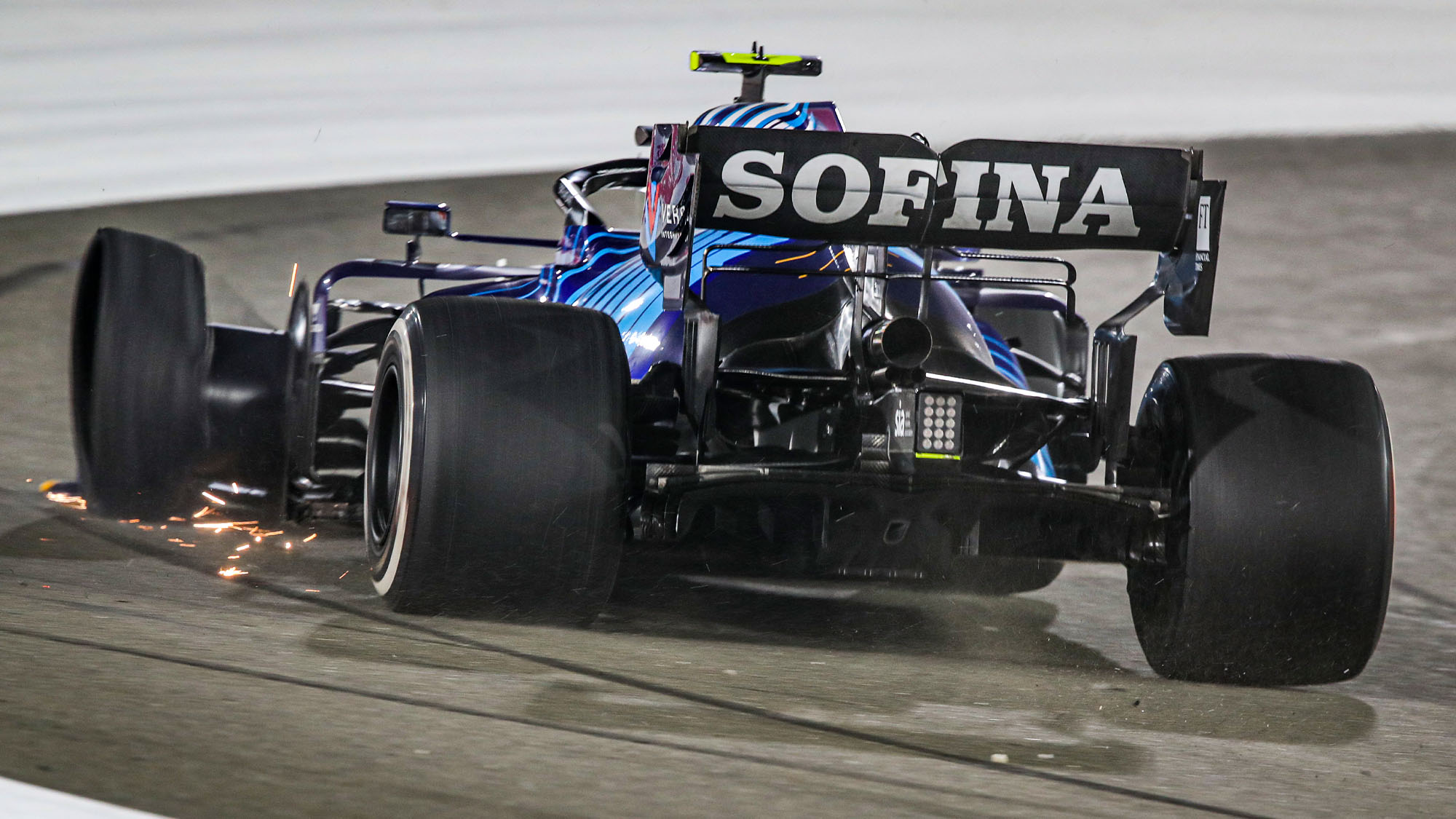 Latifi was one of four drivers to suffer a puncture

“We played it safe with the explosions with the tyres out there,” Perez said. “I think we were thinking more of the long-term picture. I think when we saw what happened to the other cars we were a bit concerned [about] that, so we played it safe and in the end, I think we left some points on the table today but we managed to minimise the losses from today’s race.

“I think what happened to Valtteri put the thought in our heads. At the end of the day, it’s better than nothing.

“[The VSC] actually prevented us and I think helped Fernando to probably not get a blow up. But if there is someone I am happy to give the podium to, it’s probably Fernando. He drove a fantastic race and he deserves to be up there. He’s a good mate.”

For Alonso, it was a first trip to the podium in over seven years, although it came after he failed with his first target of the day.

“Finally we got it,” Alonso said. “We were close in a couple of races but not enough – Sochi was the last possibility. Today, honestly I thought I could be leading after lap one, I thought with the red tyre I could have a go at Lewis, but I couldn’t. Then with Checo it was very close at the end but I am very happy for the team, also Esteban in P5, so it was a good Sunday.

Ocon’s fifth place came after a tense final few laps holding off Stroll, Sainz and Charles Leclerc, with Ferrari taking more points out of McLaren as Norris could only recover to ninth after his puncture, overtaking Sebastian Vettel late on. 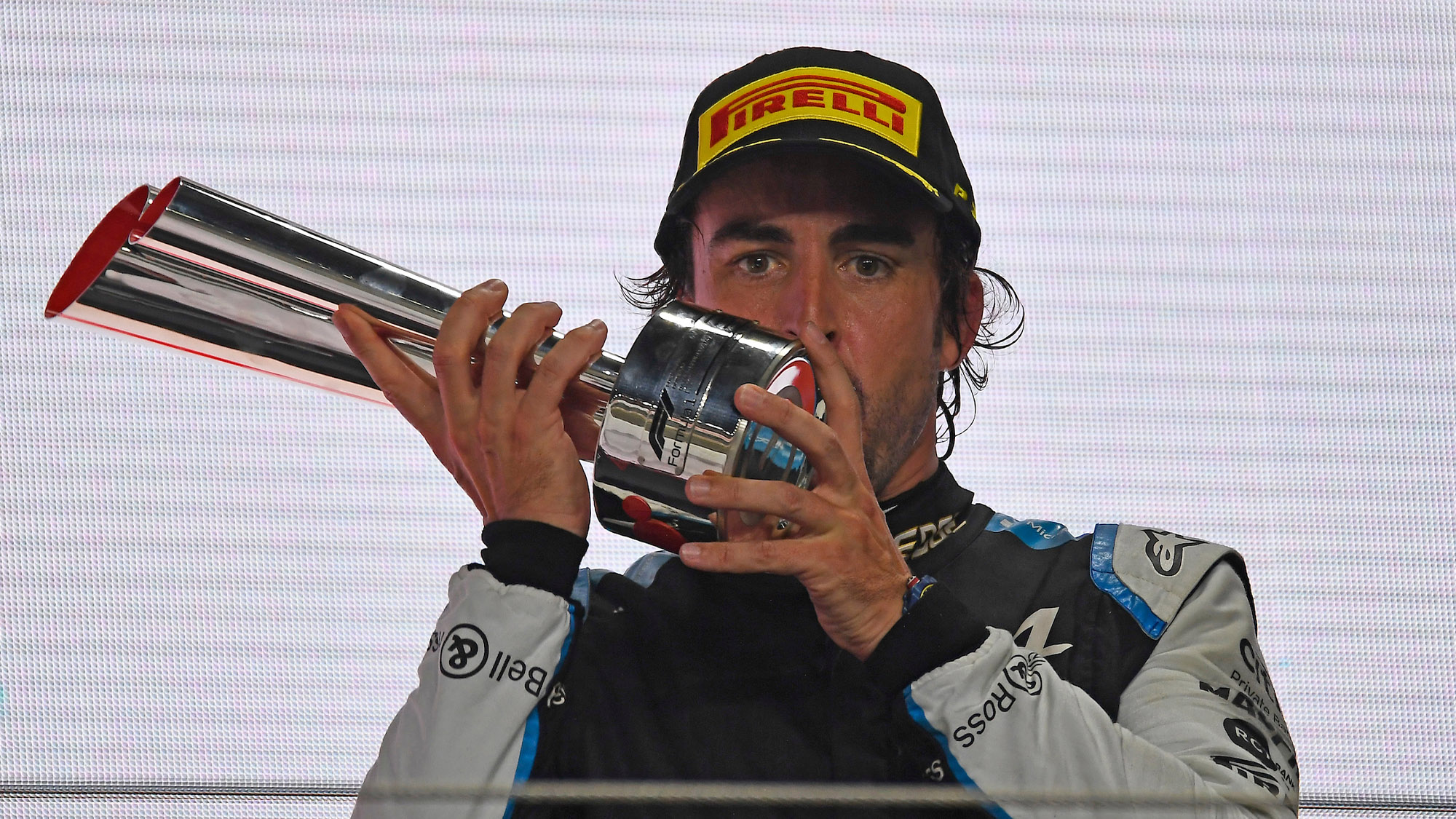 All of the excitement was in stark contrast to the front two, but served to highlight how they were in a league of their own. When the VSC was deployed, Verstappen had just set the fastest lap and he then took the chance of a free pit stop to switch to softs. It didn’t matter, as Hamilton started his final lap before the VSC cleared and so couldn’t respond despite his superior pace through the race, but Verstappen cemented the extra point as he took the chequered flag, ensuring his championship lead is eight points despite his penalty.

“No surprises there, I knew already last night that I never get presents from [the stewards], so it’s OK,” Verstappen said. “In the end, once I knew I was starting seventh, I was just very motivated to move ahead and that’s exactly what we did.

“We had a good first lap, and then after five laps, we were second again. I just tried to keep the gap small, which we did throughout the whole race, so they couldn’t do an extra stop and it gave me the fastest lap at the end. So I was definitely happy with that.

“It’s exciting, of course I would’ve liked to have made it a bigger gap but when you don’t have the pace, it’s impossible to do that. You just try to be better, try to come back stronger, especially in Saudi, at the street track. Then we’ll see in Abu Dhabi.” 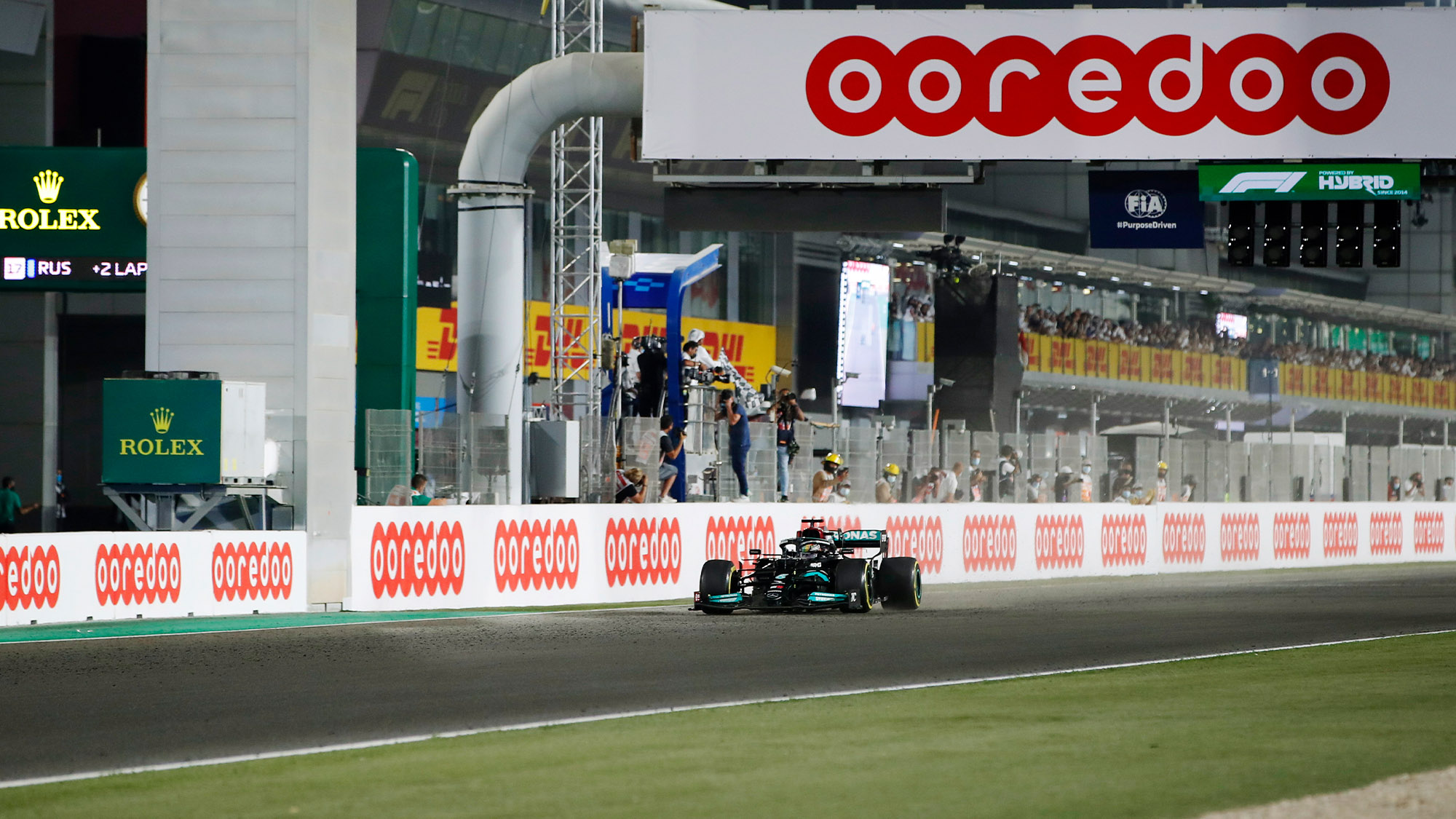 Hamilton crosses the line to win

For Hamilton, it was win number 102 and it leaves him with the momentum heading to the final double-header of the season.

“Today the race was made a lot easier with the penalties the guys got for the mistake they made yesterday,” Hamilton said. “That made it a lot more straightforward and I was just managing the gap at the front and keeping the car safe, and bring the car home.

“I feel great, in the best shape physical than I’ve been all year, at the beginning not particularly that well, so I feel great, the car is feeling better than ever. I feel positive going into these next couple of races, they should be quite good for our car so I’m looking forward to that battle.”