Lewis Hamilton had to fight for it but took victory in the 2021 Portuguese Grand Prix with an early-race blitz.

Valtteri Bottas had held onto his pole position and Max Verstappen made his own move on the championship leader, but Hamilton pulled out two crucial moves and set off into the distance in Portimao.

Verstappen limited the damage as best he could against his title rival with second place and despite a late scare, Bottas took his first podium finish of the season in third.

Hamilton’s win extends his title lead over Verstappen while Lando Norris continued his great start to 2021, finishing a respectable fifth, behind the second Red Bull of Sergio Perez.

At the start, the pole-sitter retained his lead comfortably while team-mate Hamilton held off Verstappen in the fight for P2.

Behind though things got busy quickly as Sergio Perez struggled off the line on his medium tyres and Carlos Sainz on his soft tyres capitalised to nab fourth into Turn Two.

Esteban Ocon initially lost out to Lando Norris at the start but the duo were battling for position throughout the first lap.

The Alpine driver dived down the inside of Norris to regain sixth into Turn Five but just a handful of corners later his work was undone. Baulked by an early-braking Perez up the hill at Turns 10 and 11, Ocon had to get on the brakes early too, allowing Norris to take up the open lane around the outside of the Frenchman to take the place back on corner exit.

Kimi Räikkönen’s heroics last year on the opening lap was not repeated as the Finn was the first retirement as the field crossed the line for lap two. 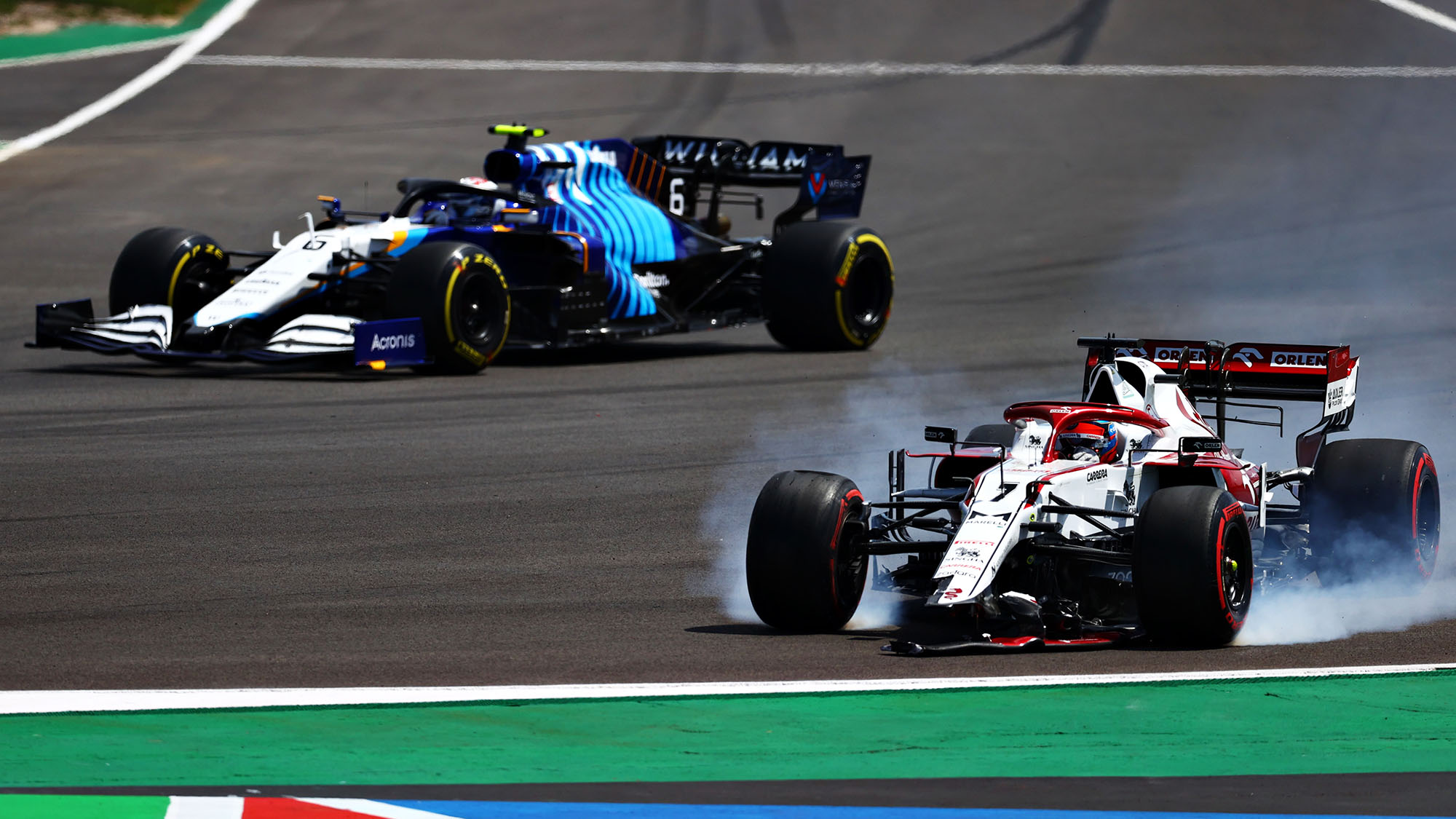 Räikkonen goes off after clipping his team-mate

He was late pulling out of the slipstream of team-mate Antonio Giovinazzi and took his front wing off the Alfa Romeo, putting him out of the race with the wing stuck under the car.

The debris on the pit straight brought out the safety car for a lengthy period. That was withdrawn opening lap seven and Bottas waited until the last possible moment to restart the pack with such a headwind.

His late start caught Hamilton out and allowed Verstappen to sweep into second place at Turn One.

Norris was a big winner, rising to fourth place ahead of Perez at Turn Five having moved clear of Sainz in the opening corners on the restart. Ocon slipped back behind the sister Ferrari of Charles Leclerc to eighth. Further down the order, George Russell slipped from his promising 11th on the grid to 15th.

Verstappen was sticking the back of the lead Mercedes through the middle sector, hovering around half a second back and crucially well within DRS range.

Entering lap 11, the Red Bull got out of shape at Turn 14 and that allowed Hamilton to eat up the gap to the Red Bull and into passing position. With DRS, Hamilton claimed the inside at Turn One to retake second place. The Dutchman tried fighting back into Turn Three but was left with nowhere to go and had to back out of a move.

Hamilton quickly closed on Bottas ahead to drop the Red Bull to outside of DRS range. The tight and twisty middle sector left the pursuing Mercedes around 0.7sec behind heading into the main straight and crucially for Bottas, just out of reach for several laps in the dirty air. 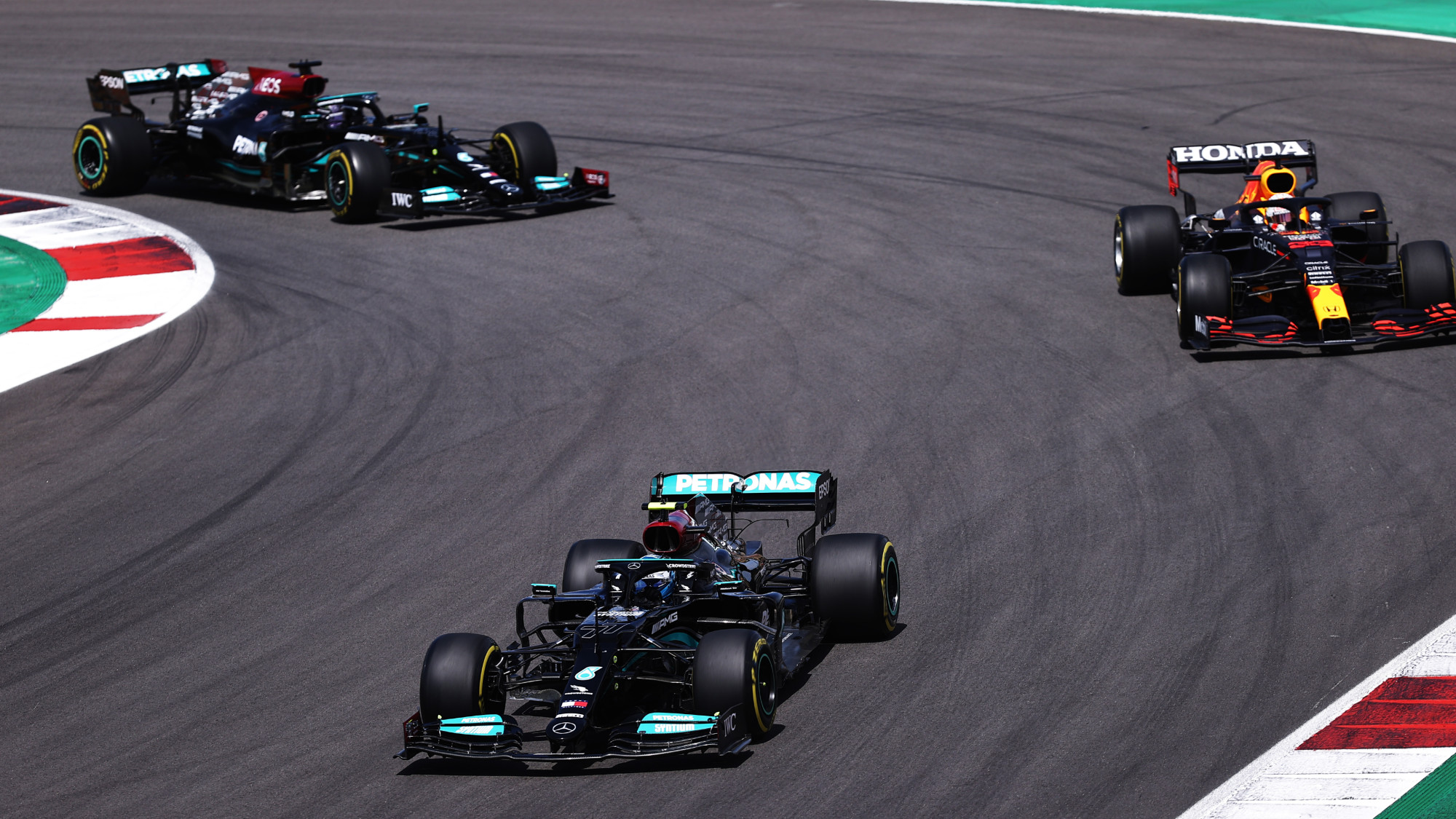 It was close between the top three throughout the first stint

Perez had complained Norris had overtaken him off track earlier on but the Mexican wasn’t bothered on lap 15, clearing the McLaren to gain fourth back.

Daniel Ricciardo had quietly been making progress through the order and by lap 18, had caught the lead Aston Martin. The medium-shod McLaren made a move on Sebastian Vettel into Turn One to move into 10th position and into the points.

Hamilton was trailing Bottas’s wheeltracks lap after lap but going onto lap 20 pulled the trigger with a move for the lead.

With a great slipstream he forced Bottas to go defensive to the inside heading into the first corner and launched clean around the outside as the Finn. Bottas had to back out to make the corner from such a small angle that he’d left himself in.

Sainz was the first of the front-running soft runners to pit for medium tyres from sixth on lap 22. He rejoined well down the order in 15th place, right behind Russell.

Norris responded the following lap to cover off his old team-mate. The 2021 McLaren man rejoined ahead of Sainz just as the Ferrari cleared the Williams.

Ocon had pitted on the same lap as Norris but lost out to Pierre Gasly when the AlphaTauri made his stop on lap 25. Gasly jumped the Alpine to take P12 after his stop.

Ferrari pulled Leclerc in on lap 26 to change his medium tyres for fresh hards, the first of the front running cars to pull the trigger on that switch.

His out-lap would have been watched closely by the leaders but the Monégasque’s pace wasn’t eye-catching right away, posting sector times a couple of tenths slower than cars around him on the worn mediums.

Hamilton’s lead was up to 3sec over his team-mate approaching halfway but Verstappen couldn’t make the same decisive move in dirty air, stuck 0.7sec back from Bottas in DRS purgatory.

The Finn was informed that he would be pitted to protect from an undercut by Red Bull if the lead gap got to 3.5sec.

By lap 34, the gap was hovering around that mark after a string of fastest laps by the race leader, but with Verstappen falling out of DRS range Merc held firm and kept both out.

Following his stop, Ocon closed into range of Gasly’s 11th position and made a move stick around the outside of Turn One to take the place. 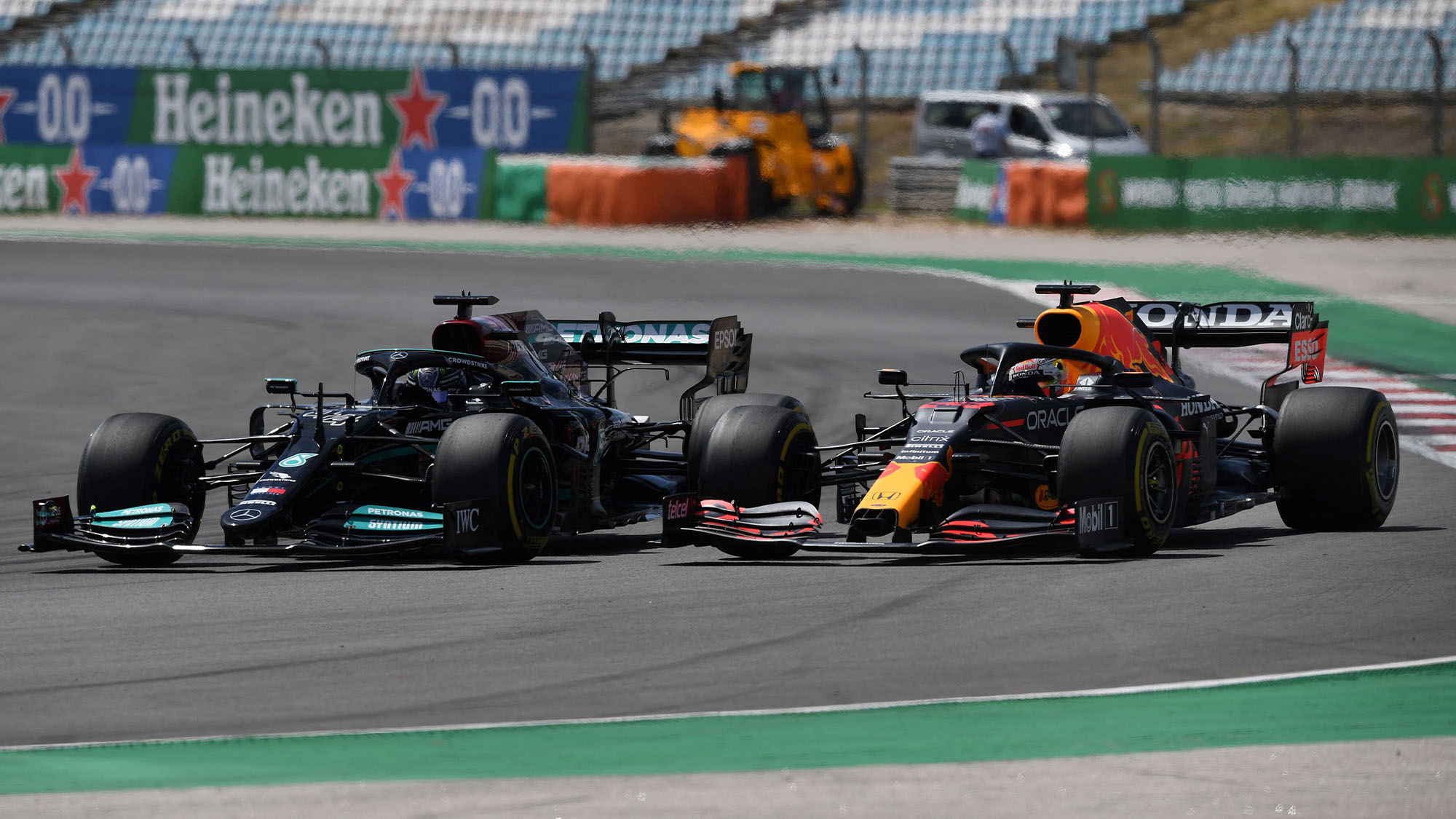 Verstappen’s mistake allowed Hamilton to close in and pass

Red Bull blinked first and pulled Verstappen in on lap 36. He was fitted with hards, triggering the hurry up over the radio for Bottas.

The Red Bull moved to the inside and claimed second, prompting the race leader to make his stop for hards immediately. Hamilton had a comfortable margin and rejoined with the theoretical lead intact, leaving Perez to assume the lead overall 11sec up the road.

Ricciardo was the last of those to start on mediums to make his stop, pitting on lap 42. A slightly slow stop as a result of overshooting his marks put him back out 10th on the road, just behind Gasly.

Bottas was told to give it everything over the team radio, getting the hurry up from Toto Wolff in his ear on lap 44. The Finn set about closing the 3sec gap to Verstappen in front with a fastest lap in response.

Ocon had been battling Sainz for seventh position following the stops and finally got close enough to make a move. The Alpine driver took to the outside of Turn One to move clear of the Ferrari.

In the fight for theoretical second, Bottas closed the gap down quickly to 1.8sec before Verstappen responded and his progress stalled out. Up ahead, Perez was left out until as late as possible with a view to take softs at his sole pit stop with an added bonus of a fastest lap point and potentially holding back Hamilton to get Verstappen in range.

That plan wasn’t as effective as the Milton Keynes team might have hoped, Hamilton breezing by on lap 51 with DRS.

Gasly slipped out of the points as Ricciardo and Alonso put moves on the AlphaTauri man on back-to-back laps and the two-time world champion looked like the man on the move in the top 10.

He made a move stick on Ricciardo into Turn One and he set his sights on eighth-place Sainz with 15 laps remaining.

Bottas’s pursuit of second came to an end as he reported a significant drop in power, losing several seconds to Verstappen on lap 55. 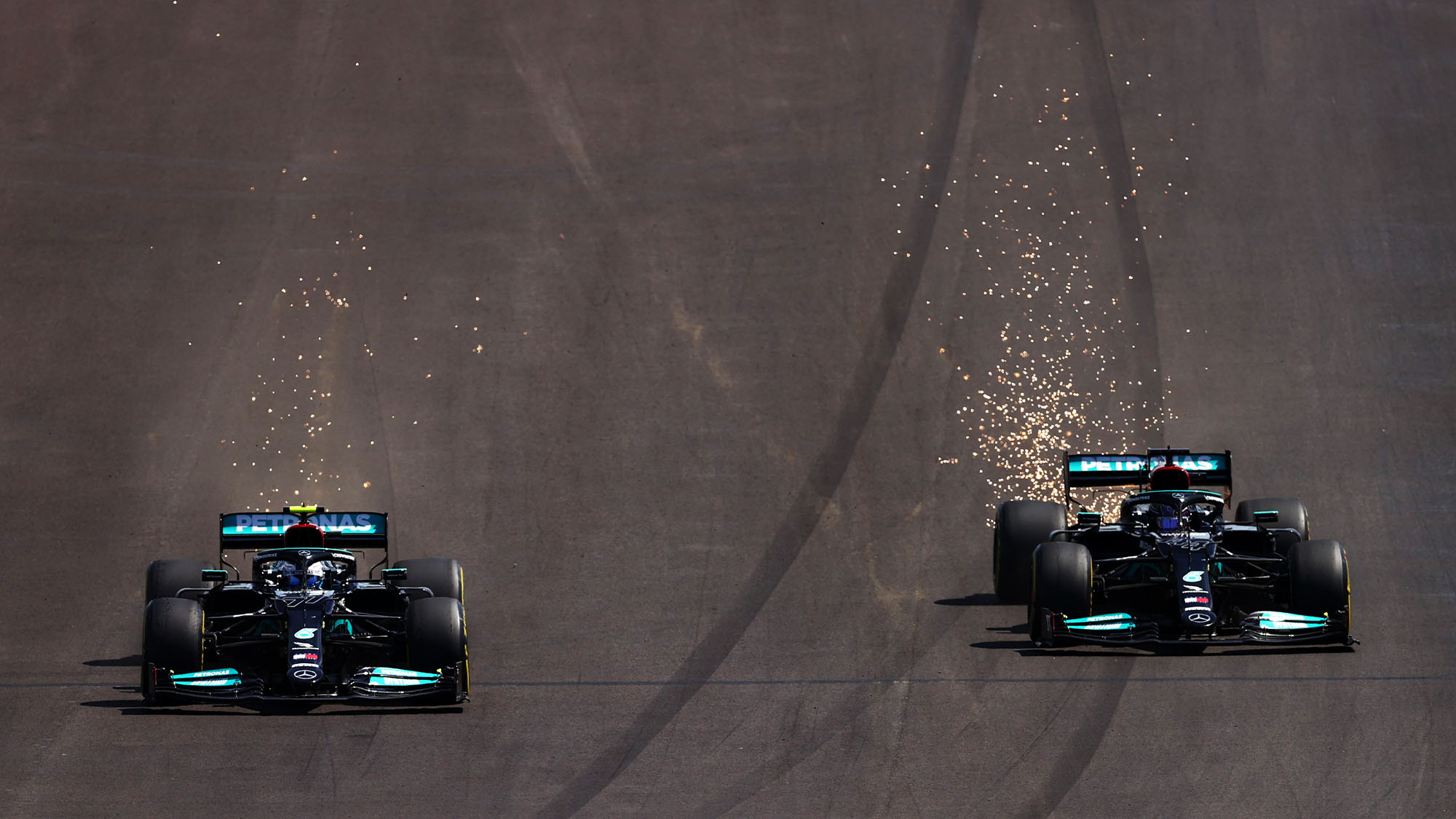 Hamilton sweeps round the outside of Bottas

An exhaust temperature sensor was the culprit and the problem was quickly righted by the team, but it all but ended his hopes of taking second back.

Alonso prevailed in the battle of the Spaniards, seizing eighth place from Sainz on lap 59 with DRS help on the main straight.

Vettel’s best weekend at Aston Martin unravelled in the race on what was a disappointing race for the team. Stroll did not repeat his points finish from both opening rounds either. The Canadian made a move on his team-mate for 13th in the final five laps.

A late battle at the back between Nicholas Latifi and Mick Schumacher formed in the final laps and was a rare positive moment for the Haas team.

A lock-up into Turn Three for Latifi opened the door for the 2020 F2 champion to take 17th position.

With three to go, Mercedes gave up on the chase for second and pitted Bottas for fresh softs and an attempt at fastest lap point. That opened up the door for Verstappen to mirror the move and attempt the same.

Hamilton’s lead in front hovered around the 5sec mark following the pit stop phase as Verstappen was just too far back for a late-race battle before his second stop.

The win is the Mercedes driver’s 97th and extends his title lead.

Norris held off Leclerc for fifth place in the fight between McLaren and Ferrari while Alpine made it back-to-back double points finishes after a tough start to the year.

Ricciardo made a move on the penultimate lap on Sainz to take ninth to salvage his weekend.

Bottas’s 1min 19.865sec was the benchmark entering the final lap but a last-lap dash for the Red Bull gave it to the Dutch driver but he lost his hot lap again for track limits.