The only practice session on Friday this weekend was topped by Lewis Hamilton on the medium compound tyre.

Both Mercedes drivers opted to run the mediums for their fastest laps ahead of qualifying later this afternoon.

Last season there were four hours ahead of the all-important Monza qualifying session. This year, FP1’s solitary hour on track ahead of Sprint Qualifying could prove vital later this afternoon and tomorrow too.

There was plenty of queueing and practice ahead of qualifying as drivers fought for track position and a tow from the car ahead. It’s sure to be a crucial factor come Q1 and the final runs in Q3.

Here is how practice unfolded at Monza ahead of the 2021 Italian Grand Prix.

With just an hour on track before qualifying, it meant that Monza was a busy track immediately in the opening minutes of the first practice session.

Every driver was out onto the circuit in the opening five minutes, though conditions were tricky on the green track.

Charles Leclerc missed the apex at Turn One on his first flying lap but was just able to make the chicane.

A different kind of issue meant Yuki Tsunoda had a brief worry about a loose seatbelt briefly but the Japanese driver continued on, apparently having fixed the issue. He was left unimpressed with Nikita Mazepin on his subsequent hot lap. After getting slightly blocked into the Lesmo One, he let the Haas driver know on the way into the second Lesmo, slowing to remonstrate with the popular Russian.

Lewis Hamilton was the early pace-setter. He set a 1min 22.262sec on medium tyres to take the top spot by over two-tenths of a second over Sergio Perez. That time was eventually beaten by the Mexican after 24 minutes but only after Red Bull had fitted a new set of medium tyres.

Max Verstappen reported he was struggling with balance in the lower-speed sections of the track. His effort on fresh mediums was still 0.4sec down on Perez’s 1min 22.127sec.

Ferrari had been mired well down the order after the first few runs. Leclerc improved to go second-fastest on his medium tyre run but the Monégasque lost his time due to exceeding track limits at the newly-christened Curva Alboreto. 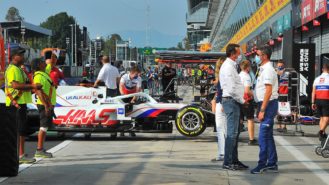 Who should you pick for your F1 Fantasy team ahead of the 2021 Italian Grand Prix?

Under 20 minutes to go and Red Bull was the first of the front-running teams to run the soft tyres for qualifying sim laps. Perez couldn’t go fastest and slotted into third place while Valtteri Bottas shot to the top of the times on medium tyres. Verstappen’s soft-tyre run was good enough for P1, 0.073sec clear of the Mercedes on a 1min 21.378sec. Hamilton ran the medium tyre too and went 0.452sec ahead of his title rival to take first position.

Bottas began to ask about finding a tow for a subsequent run with the Italian Grand Prix qualifying fun and games on his mind. Sebastian Vettel, Gasly and then Lance Stroll all displaced one another back-to-back-to-back for fourth position as they gained a nice slipstream from the driver ahead, showing its potential to gain lap time.

Norris was informed to expect things to be ‘bad’ during qualifying with drivers backing up to gain a tow from someone ahead. Esteban Ocon was left unhappy after getting baulked by Hamilton in the middle of the Ascari chicane who was stuck behind Fernando Alonso himself as the track got busy in the final sector.

Norris had gone second-fastest on soft tyres to get within two-tenths of Hamilton but lost his lap time for exceeding track limits.

Two-thirds of the field took up a single sector in the final three minutes as drivers backed up to gain a slipstream. Qualifying is sure to be just as chaotic.