Lewis Hamilton became the first driver in history to win 100 grands prix at Sochi, as he took victory at the Russian Grand Prix from a devastated Lando Norris.

The McLaren driver had stated on pole, led for most of the race, and was leading Hamilton when wet weather arrived in the final ten laps.

As the rain got harder and the circuit became slipperier, Norris made the fateful decision to stay out on slicks, while a reluctant Hamilton followed an instruction from his team to pit for intermediates.

It took little more than a single lap for the Mercedes move to pay off as Norris slid off the track, letting Hamilton through.

A brilliant drive from Max Verstappen saw the Red Bull driver claim second after starting last as a result of taking a new engine, while Norris came in seventh.

And so it proved, despite an excellent start from the pole-sitter, who pulled clear of a slow-starting Sainz in second. George Russell, starting third, moved ahead of the Ferrari, while Daniel Ricciardo shot past fourth-placed Hamilton from fifth on the grid.

But the slipstream saved Sainz, who caught the hole punched in the air by Norris and zoomed into the lead. His manoeuvres caught out Hamilton who found himself boxed in and falling further down the running order.

By the end of lap 1, Sainz led from Norris, followed by Russell and Lance Stroll, who had also benefitted from the slipstream, Ricciardo, Fernando Alonso and Hamilton. All were on mediums with the exception of Alonso who had started on hard tyres, as did most of those at the back of the grid.

Charles Leclerc, who started 19th due to an engine penalty, was up to 12th and Verstappen was 17th.

Lap 2 brought better news for Hamilton as he passed Alonso for sixth going around outside of Turn 3 and then claiming the inside for Turn 4.

Sainz pulled out a lead of just over a second to stay outside Norris’s DRS range by lap 4, and the pair were pulling away from the rest of the pack; third place Russell falling 5sec behind the leader.

Sergio Perez set the fastest lap in seventh, behind Hamilton, and his team-mate was charging too, although Verstappen found himself stuck behind Valtteri Bottas, who had also taken an engine penalty, in 15th place.

By the end of lap 6, Russell was 7sec behind Sainz and Hamilton, in sixth, was almost 10sec adrift from the lead. 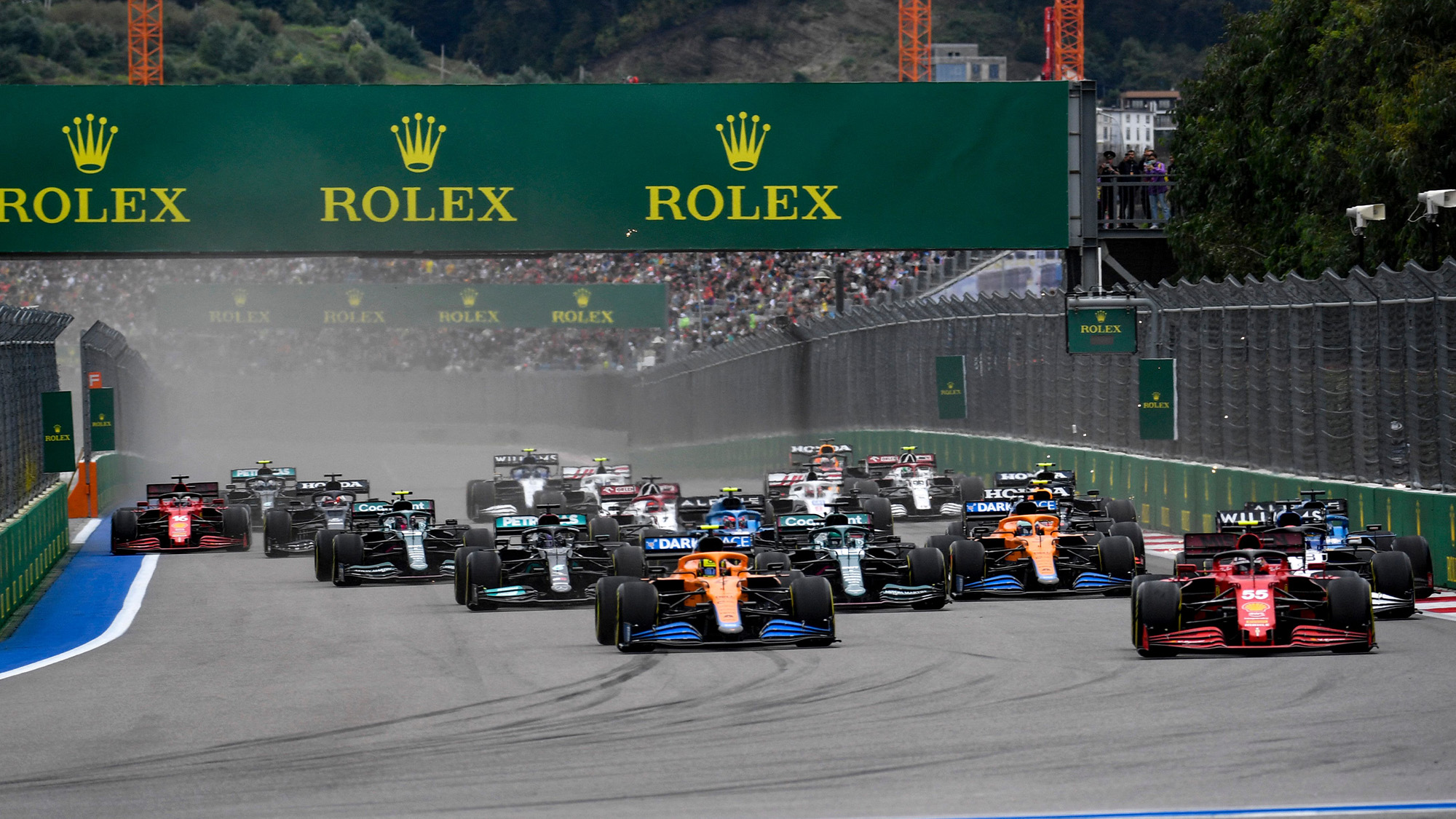 Further back, Max Verstappen passed Bottas for 14th, diving down the inside at the end of the back straight, with the Finn offering little defence.

On lap 7, with the gap still growing behind second-placed Norris, Sainz was looking to extend his stint, being told plan A + 3. Further back, Ricciardo, keeping Hamilton at bay, was told that the team was thinking of switching to plan B.

Lap 8 brought another place for Verstappen, who passed Gasly for 13, again at the end of the back straight, while Nicholas Latifi and Antonio Giovinazzi bumped wheels as they battled for 17th.

Max Verstappen’s carve through the field continued on lap 10 as he passed Leclerc after a heart-stopping moment when the Ferrari driver squeezed him to the wall as he fought a separate battle with Vettel.

Norris closed to within 0.5sec on lap 10 and was attempting to pull alongside for the lead on lap 11. Sainz held on and, by the next lap, Norris was saying his front right tyre was spent.

Lap 13 brought the first stop as Stroll pitted from fourth. He emerged in 15th, with clean air ahead.

Norris overcame his tyre troubles on the same lap, passing down the back straight for the lead. Further back, Verstappen passed Vettel for ninth, with Leclerc following past.

Lap 14 and George Russell stopped, ending up behind Stroll, as the undercut promoted the Aston Martin.

Sainz pitted on lap 15, coming out a second ahead of Stroll and with 7sec of clear air to Bottas ahead for him to try and leapfrog Norris.

But the McLaren stayed out, leading Ricciardo, then Hamilton with Verstappen up to sixth, just 8sec behind his tiotle rival and setting the fastest lap on the 17th tour.

Hamilton was closing on Ricciardo, less than a second behind the Australian at the start of lap 19, as Verstappen continued to eat into the gap, setting another fastest lap to close to within 5sec of the Mercedes – with Perez and Alonso in between.

Ricciardo pitted at the start of lap 23, swapping his mediums for hards in a bid to undercut Hamilton, but a slow stop  – which appeared to be down to the team’s signalling technology – ended the Australian’s hopes, putting him out in 14th place, 6sec behind Russell in 12th..

Norris was running 12.5sec ahead of Hamilton on lap 24, with Perez third, a further 2sec behind. Alonso was 1.5sec further back, and 1,5sec ahead of fifth-placed Verstappen.

Meanwhile, Ricciardo set the fastest lap as he pursued Russell and attempted to claw back the time lost in the slow stop. It wasn’t enough.

Hamilton pitted at the start of lap 27, coming out 2sec ahead of Ricciardo, and behind Stroll. Bottas was further up the road in seventh, after being passed by Sainz for sixth. 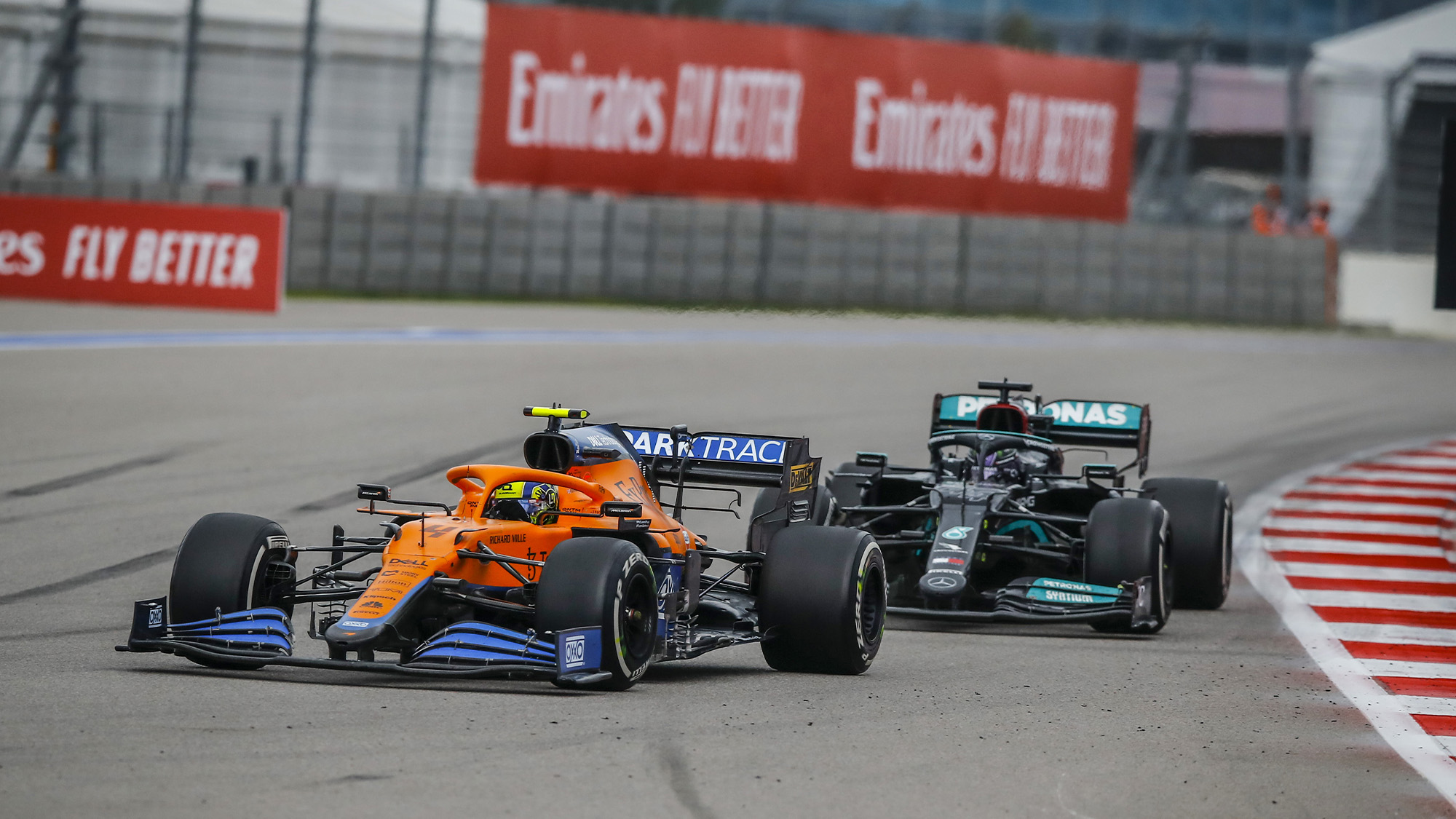 Norris pitted at the end of the following lap with no problems, emerging fourth and 5.5sec ahead of Sainz. Perez led, followed by Alonso and P19 starter, Leclerc.

Hamilton passed Sainz for sixth in Turn 2, at the start of lap 30, with just 8sec behind him and Norris ahead. A gap that was coming down as the champion set the fastest lap.

Mick Schumacher was told to retire on lap 33 with an issue that couldn’t be resolved. Gasly pitted from sixth at the end of the lap, releasing a train of charging cars, led by Sainz then Ricciardo, Verstappen and Stroll split by fractions of a second. Russell had slipped behind the frontrunners, 5sec behind Stroll.

Norris went past Leclerc for third on lap 35 but Hamilton was just 5sec behind in fifth. He followed his way past Leclerc the next lap and the Monégasque then made his stop – another slow Ferrari tyre change – returning to the track in 13th.

Perez and Alonso pitted atthe start of lap 37 – a slow 8.9sec stop for the Red Bull putting him out fifth just ahead of Verstappen; Alonso was seventh.

Norris re-took the lead, but was only 2sec ahead pf Hamilton with 15 laps to go.

Alonso passed Verstappen for sixth on lap 38, while Hamilton and Norris traded fastest laps with victory in sight. Sainz was a full 25sec behind the lead battle, with a 2.5sec cushion over Ricciardo, who was having to defend against a charging Perez.

With ten laps to go, predictions of a late shower of rain were being broadcast to the drivers, and Hamilton had closed to within a second — and DRS range — of Norris.

Perez managed to make it past Ricciardo on lap 45, with a bold move at the end of the back straight.

Spits of rain arrived on lap 46, with the tell-tale images of spectators putting up umbrellas in the stands, and parts of the track quickly becoming damp.

Norris ran wide at Turn 5 on lap 47 but managed to cling on to the lead, as the leading pair ran nose to tail

He ran wide again the following lap, but Hamilton was also tiptoeing round and couldn’t take advantage.

Bottas, Raikkonen and Giovinazzi pitted at the end of lap 47 and Hamilton was called in the following lap but ignored the call, continuing on slicks behind Norris.

Vettel made his way past a wary Stroll for ninth, but his team-mate squeezed him into the wall and the pair collifded – without damage.

Verstappen, Sainz and Ricciardo pitted at the end of lap 48, but the leader remained out, sliding around the circuit but confident he could manage on slicks.

Hamilton made the opposite choice, finally heeding his team’s call and coming in with four laps to go for intermediates. The unsure title contender said the rain had stopped but was told that more was coming.

He came out second, 25sec behind the McLaren, with the team committed to staying on slicks if they wanted to win.

But the rain was getting worse and a wayward Stroll collided with Gasly then span off soon afterwards.

Norris began lap 51 with a 15sec gap over Hamilton but wouldn’t make it to the end. The gap was tumbling as he crawled around the circuit. And then the inevitable happened: Norris slid off and Hamilton took the lead. The McLaren driver got back on track and headed for the pits, He dived into the pitlane, but then slid back on to the track before recovering.

The former race leader was running eighth by lap 53 — with the fastest lap — as Verstappen popped up in second, followed by Sainz.

Suddenly Hamilton was leading, with all the time in the world to bring his car home first for the hundredth time.