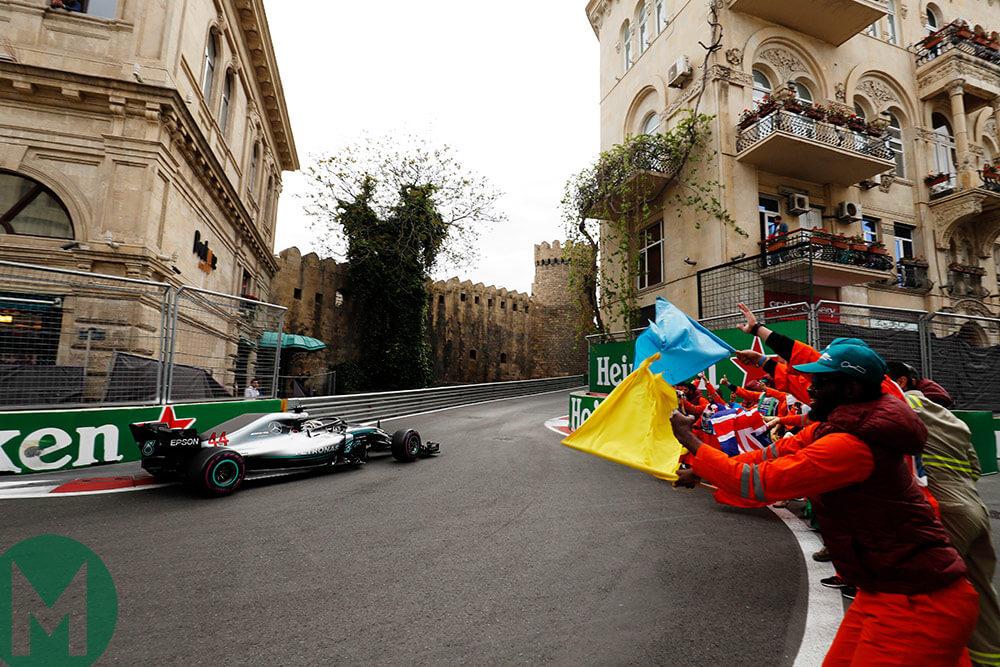 Lewis Hamilton won a dramatic Azerbaijan Formula 1 Grand Prix after team-mate Valtteri Bottas suffered a late puncture from the lead. Kimi Räikkönen recovered from a lap one crash to take second, while Sergio Pérez managed a third-place finish ahead of polesitter Sebastian Vettel.

Both Red Bulls were eliminated after sparring throughout the race for fourth. Daniel Ricciardo crashed into Max Verstappen on lap 40, sending both cars into the Turn 1 run-off.

The resulting safety car allowed leader Bottas to take his first pitstop of the race while Vettel and Hamilton also chose to pit again.

Incidentally, Romain Grosjean crashed under the caution while weaving to warm up his tyres, losing an opportunity to score his first points of the season.

The safety car came in on lap 47 and Bottas sped away. Vettel tried to overtake the Finn into Turn 1, but locked up heavily, ending the race in fourth behind Pérez, who capitalised for his first podium since the 2016 Baku race.

A few collisions on lap one brought out the first safety car of the race, which pulled in on lap five. Sergey Sirotkin retired after colliding with Nico Hülkenberg just after Räikkönen and Esteban Ocon crashed at Turn 3, eliminating the Force India.

Räikkönen recovered to fourth before the second safety car emerged, benefiting from an early pitstop under the first safety car period, and later took second due to Vettel’s Turn 1 lock-up in the closing stages.

Carlos Sainz Jr finished fifth, but team-mate Nico Hülkenberg crashed out having run wide at Turn 4 after the first restart, just after he had overtaken both Red Bulls.

Rookie Charles Leclerc drove confidently to finish sixth, ahead of Fernando Alonso who overtook Lance Stroll for seventh on the last lap. Stroll ended the race eighth to take Williams’ first points of the season, ahead of Stoffel Vandoorne in ninth.

Not in contention for points until the late drama, Brendon Hartley rounded out the top 10 ahead of Marcus Ericsson, who received a 10-second penalty for a collision with Kevin Magnussen, who ended the race last and 13th.

For full analysis of the Azerbaijan Grand Prix, stay tuned and sign up for the Mark Hughes newsletter to receive the in-depth Grand Prix report to your inbox soon.