Hazel Chapman, the wife of Lotus founder Colin, and who without there would “be no Lotus”, has passed away at the age of 94.

In an era when the upper echelons of the automotive and motor sport worlds were dominated by males, Hazel was a trailblazer in her business leadership of the famous brand, helping to facilitate her husband’s genius.

Born in North London in 1927, Hazel met Colin Chapman at a dance, aged 16. The meeting was fortuitous in more ways than one: Colin began to construct his first car – the Lotus Mark 1 – in the garage at back of her parents’ Hornsea home.

When Colin began working with the Royal Air Force, it was in fact Hazel who carried on the building of the Mark 1, and then the Mark 2 also. 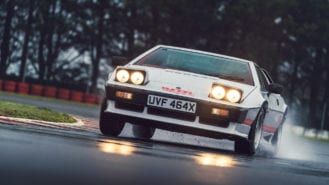 Reviewed by Andrew Frankel in this month's edition of Motor Sport, Colin Chapman's own Lotus Esprit Turbo is as mercurial as the man himself

These cars brought competition success, with both Hazel and Colin driving, and thus orders began coming for the automotive services the racing couple could provide.

It was the former who provided the £25 to make Lotus a limited company, months after the first Lotus business had been formed in January 1952.

After the two married in 1954, she would feature on several boards of the brand’s famous companies including Lotus Cars, Team Lotus and Lotus Components.

Whilst Chapman was known as the ideas person, Hazel often provided inspiration for some of Lotus’s creations herself, including the Lotus Seven, which was created as a successor to the defunct Mark VI, as described in Karl Ludwigsen’s Colin Chapman: Inside the Innovator.

“For better or worse, the Mark VI established Lotus as a maker of uncompromising sports cars for the rabid enthusiast,” Cosworth DFV designer Keith Duckworth recalls in the book. “That Lotus had abandoned this market was bemoaned by Colin’s wife Hazel at a Sunday lunch at their home[…]Lotus no longer made ‘a cheap kit car like the VI for “the boys”,’ she complained to Chapman and colleague Gilbert ‘Mac’ Macintosh.”

In exchange for Hazel taking over the washing up at that meal, Chapman and his colleagues agreed to quickly look into her idea, from which the Seven was born.

She took a matriarchal position in the organisation, particularly at Team Lotus, and was close to almost all of its F1 drivers, including Jim Clark, Jochen Rindt, Mario Andretti and Ayrton Senna.

When Chapman passed away in 1982, Hazel had a leading role in recognising Lotus Cars needed new ownership, and making sure the right people were found to take it on. She then became a director at Classic Lotus, the company which preserves heritage Lotus competition cars, run by her and Colin’s son Clive.

However, she still remained close to the Lotus Cars company, and it was tradition to show her every new road car before it was then unveiled to the public, as well as ‘signing off’ the 100,000th model in 2018, before being present to view the Lotus Evija before its launch in 2019.

“This is a very sad day for everyone around the world associated with Lotus,” said Matt Windle, managing director of Lotus Cars. “Without Hazel Chapman there would be no Lotus. The entire Hethel team, and those working at our facilities around the world, send their sincere condolences and best wishes to the Chapman family.”

Motor Sport Magazine extends it condolences to the Chapman family, friends and Lotus.