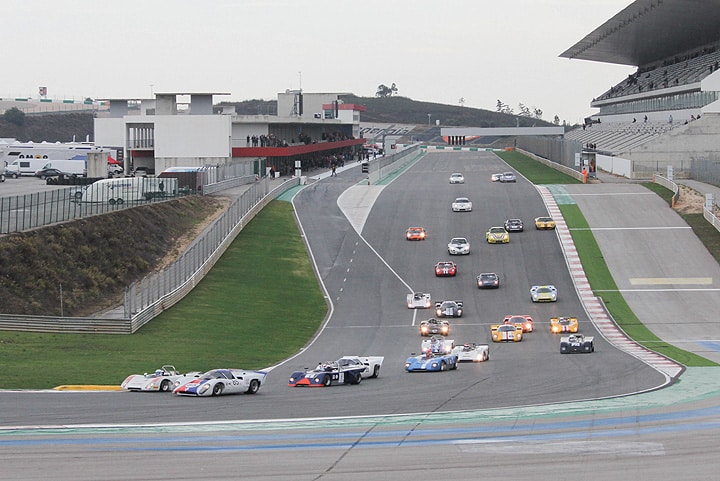 The thunderstorms and torrential rain that threatened to de-rail the US Grand Prix in Texas cost the Masters Historic Racing Historic Formula 1 cars any chance of racing at the Circuit of the Americas.

The planned double-header for a superb 36-car field was lost completely as much of Saturday was washed out and the organisers had to move F1 qualifying to Sunday morning. The Historic F1 support races were an inevitable casualty of the situation.

There was also some rain in Portugal over the weekend, but not enough to hinder the Algarve Classic Festival at the Portimao track, the final historic racing festival of the season in Europe.

The Historic Grand Prix Cars Association season wrapped up in Portugal with Peter Horsman (Lotus 18/21) winning the opening race by a handy margin from the hard-charging Rod Jolley (Cooper T45/51). Horsman then repeated the result in the second race, albeit with a smaller margin.

With the engine of his front-engined Scarab under-going attention after dramas at Goodwood, Julian Bronson hopped into a Cooper T51 to bag a podium finish in the second race while Guillermo Fierro topped the front-engined cars in his Maserati 250F.

Swiss racer Bruno Weibel (Lotus 20) had a nerve-wracking time on his way to clinching the Lurani Trophy for Formula Junior at the first attempt. Even though he watched the final race of the season from the sidelines after a gearbox failure in the weekend’s opening race, Weibel took the title by the smallest of margins when Daniele Salodini (Taraschi) could only finish third in class. Half a second split Salodini from the second place he needed to steal the title.

From a combined field of nearly 50 cars, Martin O’Connell (Chevron B19) and Patrice Lafargue (Lola T298) each took race wins to conclude a fantastic season for Classic Endurance Racing. At the end of what has been an outstanding season for the West Midlands racer, O’Connell won in the rain as Grant Tromans/Richard Meaden (Lola T70 Mk3B) and David Tomlin (Lola T210) rounded out the podium party.

There was nearly a British win in the second CER race as Russell Busst (Chevron B31) had one of his best-ever races to lead until Lafargue finally edged the Lola ahead. Busst still took a fine second from the ex-Chris Craft Lola T292 of Tony Sinclair.