Colin Chapman is synonymous with innovation in Formula 1 and car design. The Lotus team boss concocted plenty of championship-calibre cars that the likes of Jim Clark, Jochen Rindt, Mario Andretti and Emerson Fittipaldi piloted to titles.

Taking inspiration from aviation in particular, Chapman was not afraid to go against the grain and try various solutions to F1’s numerous problems.

His own Archimedes moment led to a major redesign and impact on the team’s drivers. Pushing the envelope in pursuit of more lap time gains, Chapman introduced a new seating position, one that took Jim Clark a little time to get truly used to.

Karl Ludvigsen details the process Chapman and Lotus went through to see off its rivals in the 1960s in an extract from his new book Colin Chapman: Inside the Innovator.

Extract from Colin Chapman: Inside the Innovator, by Karl Ludvigsen

Colin Chapman wasn’t put off his stride by Cooper’s quick counter-attack. On the contrary. He was on a conceptual roll that took him into 1961 at warp speed. ‘I think of them in the bath,’ said Chapman about his creative inspirations, ‘and also in the wee small hours of the morning, lying in bed. Everything seems to be so much clearer then, doesn’t it? I need about five-and-a-half to six hours’ sleep a night, and when I’m thinking about something I usually spend an hour or so just lying there, mulling it over. You chew it all over, over and over again, looking at it from different viewpoints, assuming something is static and moving all the other variables around and then all of a sudden you say, “Hey! Why didn’t I think of that before?”’

‘His most annoying characteristic was that he was almost always right,’ testified racing-team manager Peter Warr. When Chapman came in with one of his brainwaves ‘you’d think, “He’s really gone off his rocker this time. I’m going to have it out with him.” And nine times out of ten the bugger would turn out to be right. But when he did get it wrong he made some big ones.’

Hill bolt upright in his Ferrari alongside Clark, lounging in the Lotus by comparison

One that was undeniably right, for 1961, was steeply inclining the driver’s seat to achieve a striking reduction in frontal area. This was a completely natural and indeed inevitable concomitant of the adoption of the rear engine, since there was no longer an engine to block the driver’s view. With the Sixteen Chapman had attained what in retrospect would be viewed as the ultimate in frontal-area reduction of a front-engined Grand Prix car. Now, with no engine in the way, Chapman saw that even further shrinkage was possible. He was the first to twig this inviting potential of the mid-engined layout.

It’s tempting to speculate whether Chapman, with his RAF experience and interest in aviation, weighed the idea of a driver in the prone position. The Wright brothers used it for their first Flyer and the German flight research establishment tested it extensively in the 1940s, again with the aim of frontal-area reduction. Many of his ideas came from aviation, as he explained:

‘It really gets down to what making progress in any engineering field is all about. I think that progress comes, to a large extent, from a cross-pollination of ideas from other engineering fields and not just through having a blinkered approach to your own discipline. I like reading a lot on subjects other than racing. In fact, I think I get my ideas because I take in subconsciously a tremendous amount of information and design philosophies from other fields. You’ve got to have a pretty general sort of knowledge. That’s why I’m very interested in aviation and why I read all the aviation magazines.’ In this instance, however Chapman must have concluded that the prone driver of a racing car wouldn’t have welcomed having his head so close to the accident.

Until this Colin Chapman breakthrough racing-car designers had been content with a conventional seated position, gently reclined according to taste. Colin himself had hitherto set 20 degrees from the vertical as the rake to be maintained. In Chapman’s first new-concept design, his Formula Junior 20 of 1961, the seat squab sloped back at 50 degrees to the vertical. A concomitant was a steering wheel reduced in diameter to 13 inches to fit into the shrinking space between the driver’s legs and the windscreen. The result, in the 20, was 30 per cent less frontal area than in the Eighteen – a vast reduction in a low-powered car for which this was instantly useful.

Trying a 20 at Brands Hatch J.W. Anstice Brown of The Motor found that ‘one lies in the car rather than sits, tucks one’s feet under the anti-roll bar and finds the pedals. Sitting so low in the car gives the circuit a different appearance than it would have in a normal touring car and the driver is very conscious of being surrounded by the road whilst quite small undulations in the track appear as hills.’ John Bolster of Autosport remarked that ‘the driving position was quite new to me as although I have previously been recumbent in a car, it was perfectly stationary at the time.’

The Formula 1 Lotus 21 of 1961 and its successor the 24 of 1962 had seat-back angles akin to that of the 20. ‘The first time we tested the car at Goodwood,’ wrote Jim Clark of the 21, ‘I remember having great difficulty adjusting myself to that position. The front wheels seemed much higher than eye level and the fact that my weight, more than ever before, was distributed up my back, meant that the theory of driving by the seat of one’s pants had to be extended.’

In the semi-monocoque 25 of mid-1962 the seat-squab slope was even steeper at 55 degrees and the steering wheel even smaller at 12 inches. ‘This initially caused Jim Clark some concern,’ reported David Phipps, ‘as he was unable to see the road close to the front of the car and also had less warning of impending rear-end breakaway.’

In the 25, said Clark, ‘this lying-down position, though not completely new to me, was somewhat more accentuated than it had been in either the Lotus 21 or 24. I required some time to become accustomed to it. It was a great benefit for the designers from an aerodynamic point of view, but at first it held some difficulties for the driver. For example the worm’s eye view of the track which this position gave meant reorienting oneself with the features of the track to which one had been accustomed. But once I had mastered the new position I wondered how I had ever driven a racing car any other way.’

Jim Clark cited two limitations to the degree of seat recline allowable in a racing car: ‘One is that the driver’s shoulders must be high enough to allow his arms to move freely without his legs and the rest of his body getting in the way. The second is the tremendous muscular strain which comes from having to keep your chin jammed down on to your chest in order to see where you are going. On a long race this position, combined with the heavy g forces which come into play at high speeds, is likely to cause a very stiff neck.’ Ultimately in fact g forces were destined to prevail in demanding greater neck strength from Grand Prix drivers.

Although he realised that he imposed new demands on his team drivers and customers alike with his supine seating, Colin Chapman was unapologetic. ‘We never make our cars any bigger than they need to be,’ he said at the time. ‘But in our Lotus 25 single-seater, for example, there is more space than in some of its competitors. When there was a discussion about minimum interior dimensions, the Lotus was the only one that fully conformed.’ 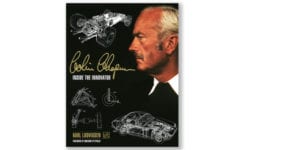 Colin Chapman: Inside the Innovator