It was nice to have some normality back in our lives on Sunday afternoon. Twenty Formula 1 cars on a grid ready for a real life motor race that kicked the season off in some style.

As odd as the empty paddock and mask-clad team members looked, equally unusual was that just 11 of the original 20 made the chequered flag in what was an unpredictable race of drama and attrition. It was arguably the perfect scenario F1 could have hoped for after its long-awaited return.

There was no shortage of action throughout the 71-lap race. Title protagonists suffered, midfield teams emerged as genuine threats and Lando Norris‘ first F1 podium made for a feel-good story to end on.

If the racing can be as engaging and unpredictable as that, why can’t Formula 1 produce a similar showing consistently?

The Red Bull Ring might be a world apart from its original majestic form but it still stands apart from the mass of contemporary circuits where gravel traps are paved over and extended run-offs give the ambience of a supermarket car park.

The hint of its old-school past was a key factor in Sunday’s entertainment. Drivers were clearly wary of the gravel deterrent from Turns Four to Eight, while the unforgiving kerbs spelled the end of many and kept Mercedes’ advantage in check, as they threatened to jolt critical sensors to destruction.

The Turn Nine and 10 right-handers are notoriously brutal and, in spite of the removal of certain kerbs ahead of the race, proved to be a huge factor throughout the weekend.

Certainly they were effective in keeping drivers in bounds and punished those who got it wrong, exactly what racing in F1 should be about.

The kerbs could be feasibly be implemented elsewhere with relative ease and wouldn’t stop drivers pushing the limits as they are all hard-wired to do so (the limits would just be a bit tighter).

And why stop at the kerbs? As much as we all want to see the greatest drivers on the planet going wheel to wheel in the fastest cars without any interference, the truth is that an uninterrupted race wouldn’t have been nearly as thrilling to watch.

Unpalatable as it may be, artificial influences often improve the racing. In Austria, the safety car(s) made for the perfect spanner-in-the-works, deployed on four separate occasions and bunching the field up regularly, putting drivers on differing strategies in the middle of the metaphorical ring to go at it for another round with each restart.

Last season’s Brazilian Grand Prix resulted in an action-packed finale thanks to more late-race safety cars. The steady restarts led by Max Verstappen, the eventual race winner, deprived the field of a major tow up the hill following Junção, and meant that the field was compacted in a similar way to a grid start by the time they could overtake after crossing the start/finish line.

Following the manic race, F1 managing director of motor sport Ross Brawn said that F1 would be looking into how to reproduce similar racing.

“It was an exciting and fascinating restart, which will be analysed very carefully, as the closeness of the pack in the seconds leading up the green flags resulted in a thrilling spectacle as drivers jockeyed for position and where the slightest advantage proved decisive,” Brawn said. 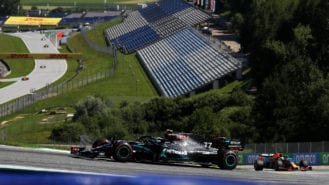 While F1 can’t just throw random safety cars during a race or bunch the field up every time there’s a yellow flag à la IndyCar, eliminating the VSC, which maintains the gaps between cars, and reverting to the ‘old-fashioned’ safety car might open the door to closer racing without venturing into gimmick territory.

Implementation of a designated zone closer to the start/finish line for the lead driver to pull the trigger in might also help keep the field bunched up for closer racing on restarts. If Brawn and F1 really are considering how to spice up racing, there may be merit to such a concept.

With current regulations preventing overtakes before the line, allowing the leader to only go for it between safety car line one and the finish line should keep the field packed tightly but allows for the lead car to retain the advantage of deciding when to go at any point in between, which is exactly what worked in Brazil last season.

Off-track, the regulation changes to F1 in 2022 are designed to promote exactly the type of close racing that thrilled in Austria.

A McLaren on the podium and Racing Point, which was on the verge of collapse as Force India, fighting with Ferrari on genuine pace was brilliant to see. Hopefully this  new level of competitiveness won’t fall away as it so often does following the implementation of a new ruleset.

There is one aspect of the race that’s unlikely to be repeatable in subsequent seasons, though. The prospect of a much shorter season will have had an impact on strategy, with eight races confirmed for the championship and uncertainty over how many more will be added.

Scoring results in the here and now is crucial then, and the racing we saw was cut-throat. Norris’ do-or-die move on Sergio Perez for fourth at the time made his race, and there was no quarter given at the front between Lewis Hamilton and Alex Albon on two occasions.

With lighter-touch regulation that has reduced the number of penalties dished out to drivers in wheel-to-wheel racing and encouraged aggressive on-track battling (Lewis Hamilton may disagree), Austria should be a blueprint for F1 to focus on great, if not entirely pure, racing.