Kyle Forster worked as an aerodynamicist at Mercedes-AMG F1 from 2018-2020 and runs the JKF racing engineering consultancy.

Trust me that nobody in the Formula 1 world could tell you the difference between a car launch and a livery launch.

Certainly not after Haas gave us the first glimpse of a 2022 grand prix car. It was billed as a livery reveal but the car underneath the paint scheme isn’t greatly different to the one that will roll out for testing in Barcelona at the end of this month, according to team principal Guenther Steiner.

I don’t doubt him either because the model looks about as representative as I’d expect any other team to launch with.

So there’s already plenty to say about the VF-22, giving us not just an insight into the thinking of the Haas design department, but also showing where aero engineers will be looking to make gains over their rivals.

Marginal gains are the order of the day in 2022, with ever-tighter restrictions on aerodynamicists in an effort to produce closer performance and racing.

You’ll be disappointed if you’re looking for a double diffuser-type development that could bring a repeat of Brawn GP’s 2009 championship win. But zoom in and you can see how designers are exploring the new rules. 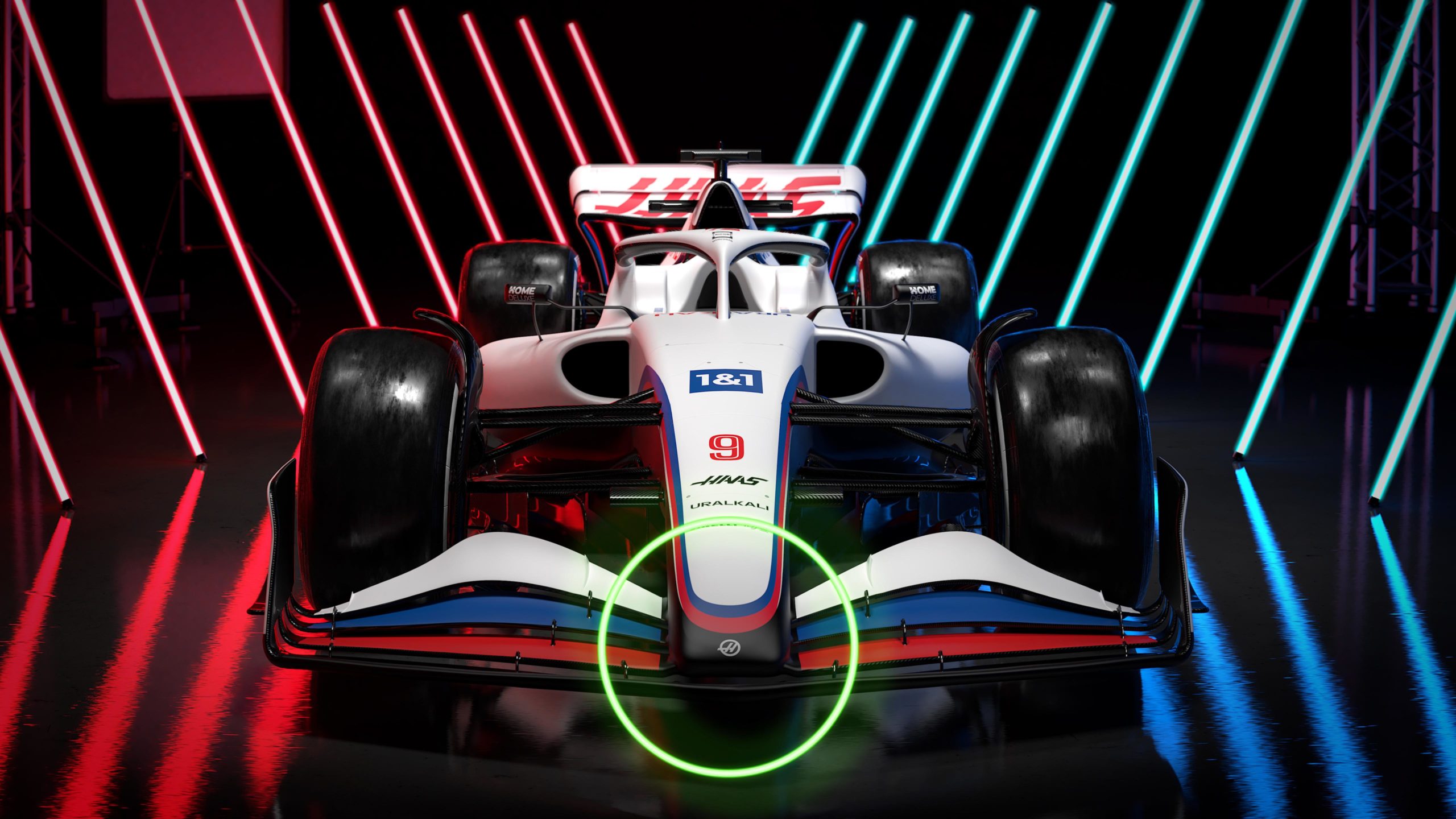 At the front, the VF-22 looks markedly different to the show cars, displayed by Formula 1 last year, to give an indication of how the new grid would look.

There’s a little bit of freedom to choose your approach for the front wing and Haas has gone with a single front wing element disconnected from the nose (one of the show cars had two disconnected elements, the other had none).

Haas’s choice makes sense: air will always be sucked towards the low-pressure area under the nose, curving upwards and slowing airflow. The disconnected element manages that air, helping to maintain the flow quality underneath the nose.

It’s unlikely that two elements would offer much benefit over one, so Haas has opted for the clean single element option. 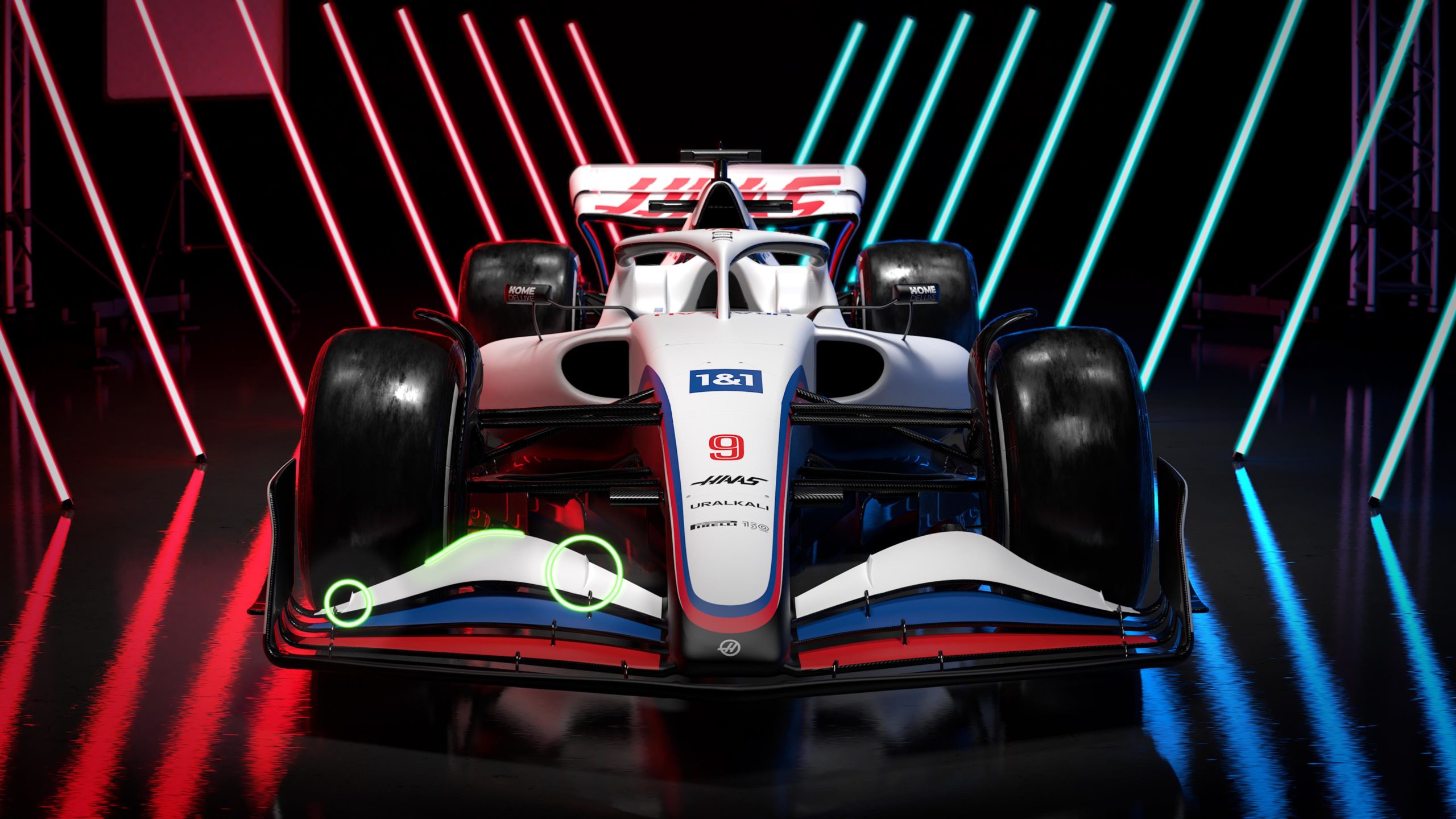 The new regulations are aimed at reducing the amount of turbulent air generated by the cars, enabling others to follow more closely.

However, aerodynamicists aren’t going to give up their vortexes without a fight, and Haas looks to be using everything at their disposal to create the swirls of air, which help to drag turbulent air away from their car — particularly the wheel wake — and direct flow to where it’s needed.

The fences at the pivot points of the front wing flap look to be deliberately placed to create small vortexes that would manage airflow in the absence of strakes, which are now banned.

The front wing’s obvious step in curvature, just inboard of the tyre, looks to be another attempt to overcome this restriction.

The area of high curvature change may create a sheet vortex, which rolls up into the familiar swirling vortex beyond the trailing edge.

None of these measures are likely to be as substantial as previous designs, but it’s a case of getting what you can.

It’s worth noting that Haas has opted to only adjust the rearwards flap element instead of the rearwards two (both are permitted by rules). 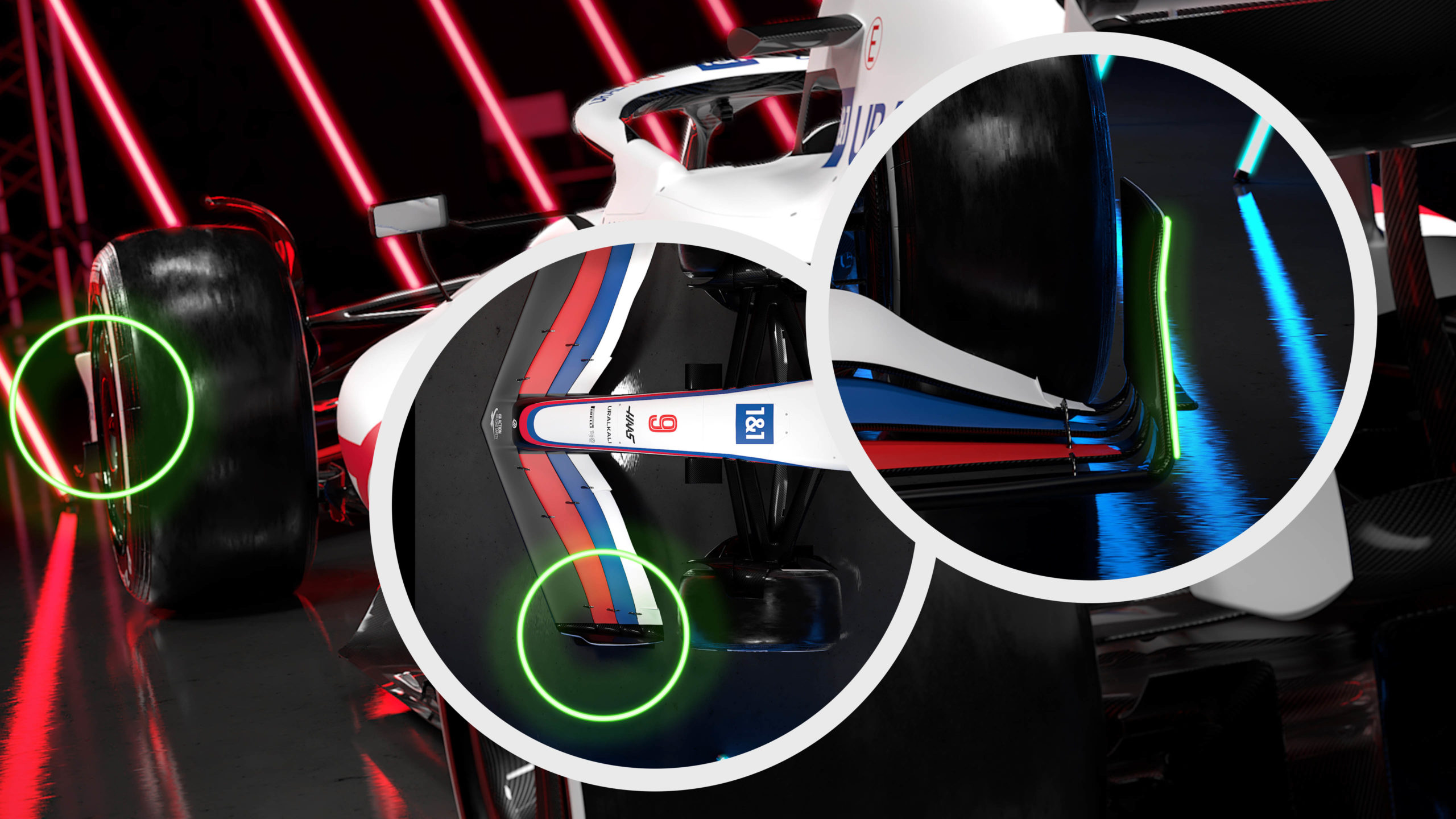 The front wing endplate curves outwards towards the top. Combined with the cutout at the front, this pushes the tip – and the vortex it creates – as far out as possible under the regulations.

The team must see a benefit in managing the top and outboard tyre wake to be pursuing this route. This may also be providing a little bit of extra upward airflow (upwash) in this region, optimising flow to the rear of the car. 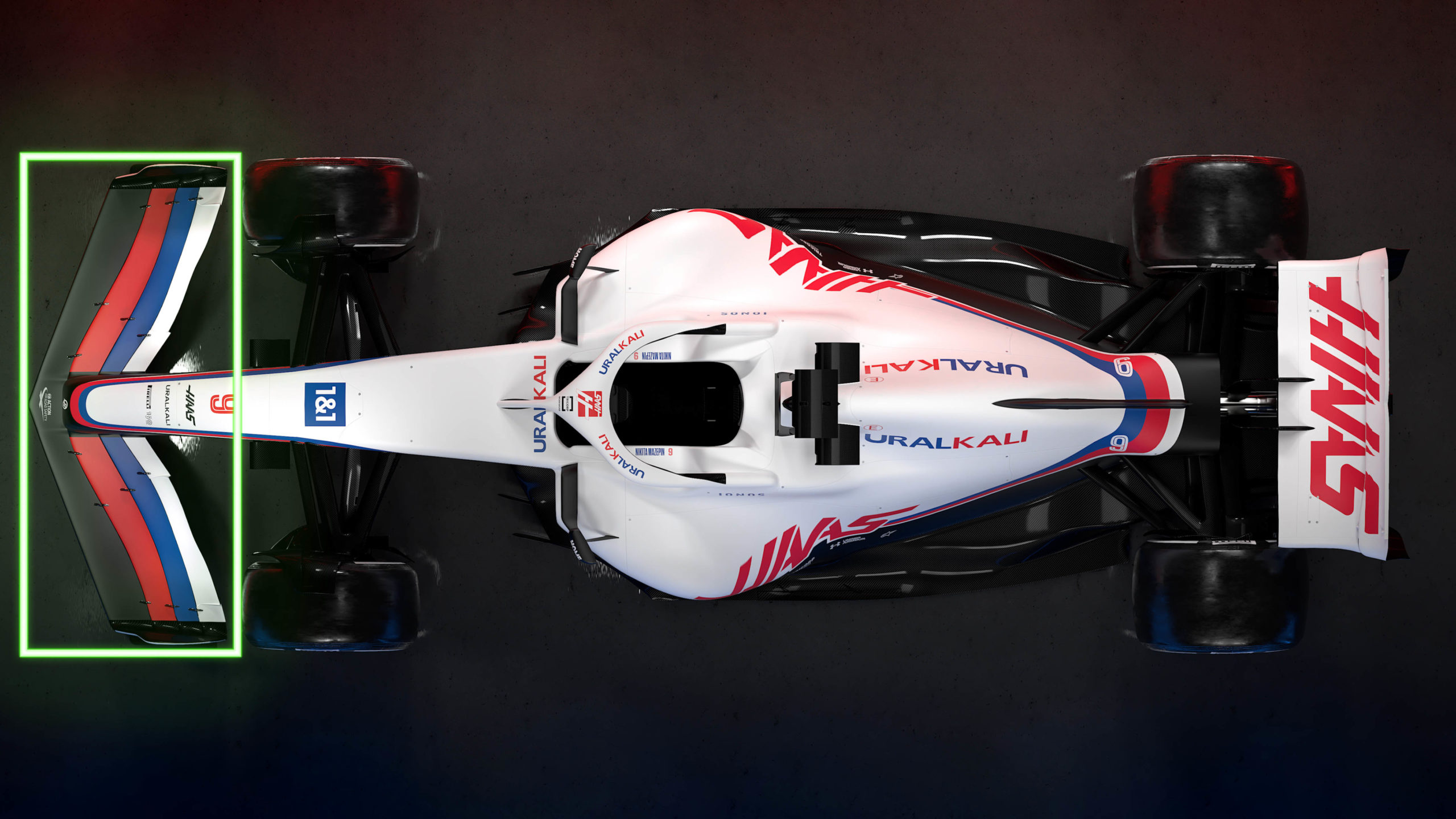 Haas looks to be pushing to the limit of the front wing legality box, almost extending as far the front and back as possible. This isn’t wholly unexpected, and may be an indication of the front wing’s greater role in front balance, now that bargeboards and the bargeboard footplate are no more. 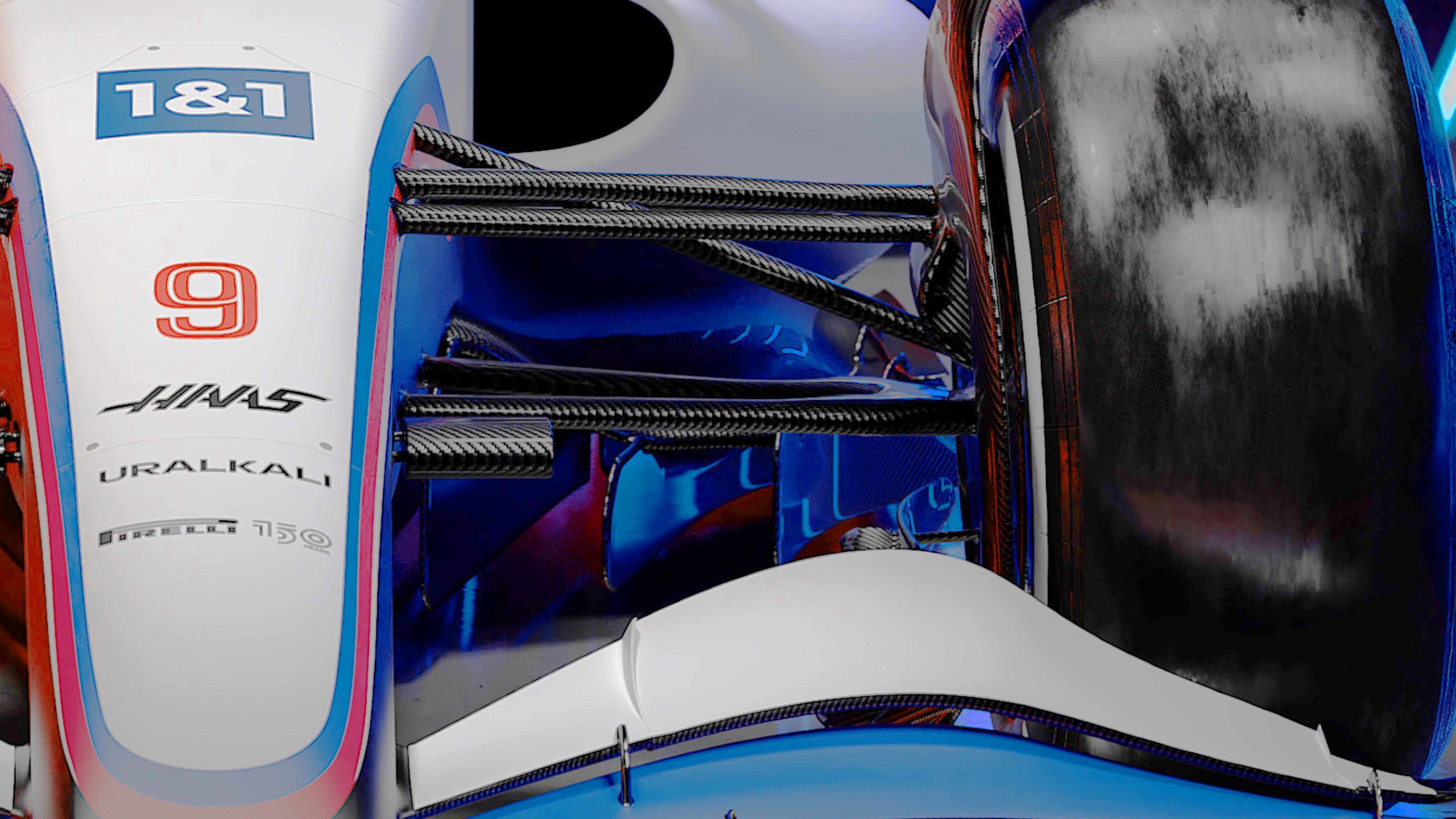 The front brake ducts are very small, this is likely due to no throughflow to the outside of the wheel allowed by rules so it’s cooling air only. 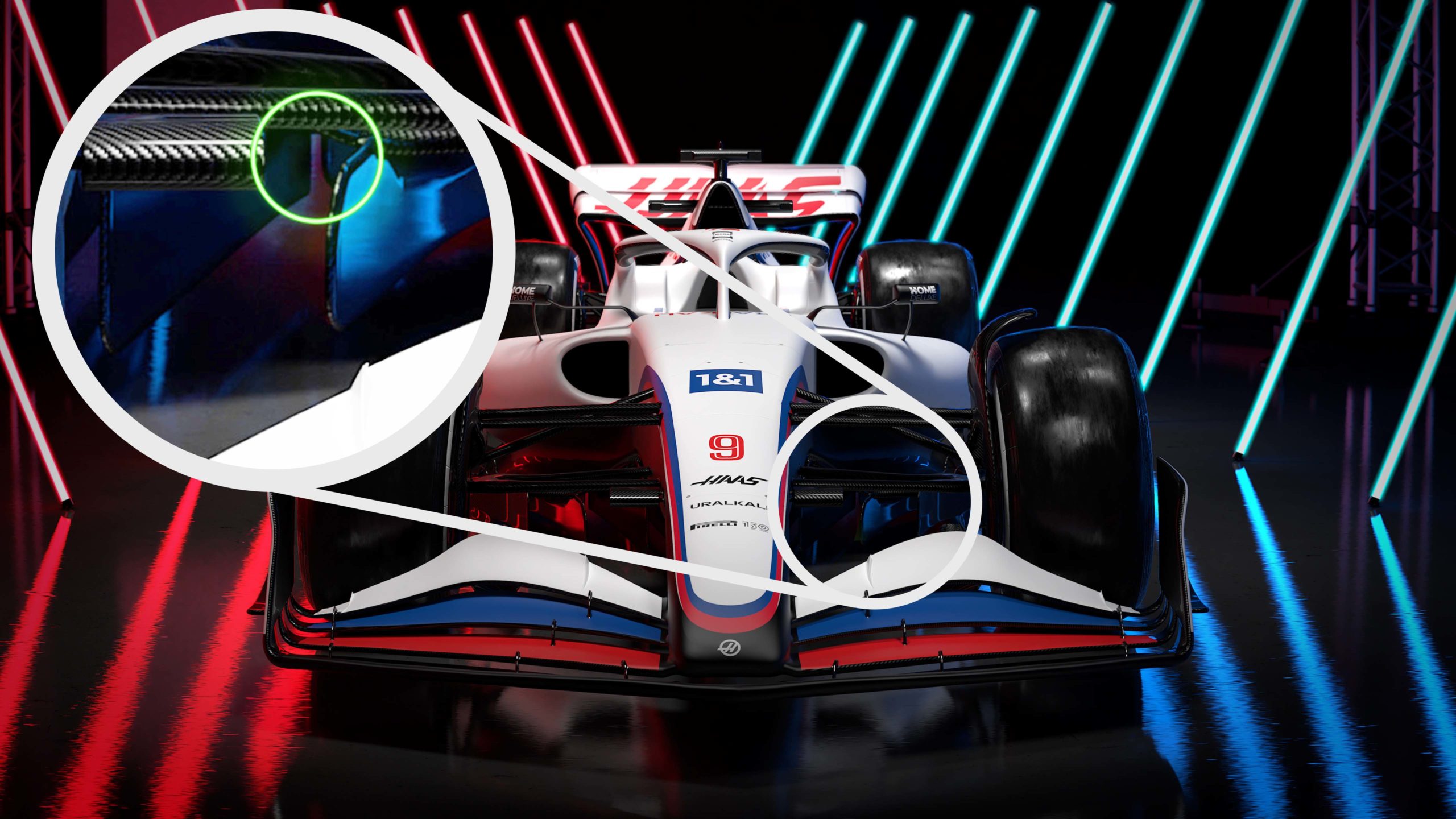 With new channels underneath the cars to generate ground effect, the floor is a critical element of the 2022 cars, particularly at the channel inlets, ahead of the sidepods, where up to four strakes can be mounted to manage airflow.

At first glance it looks as if Haas only has three, but look closer and there appears to be a fourth strake further back in a flapped arrangement. 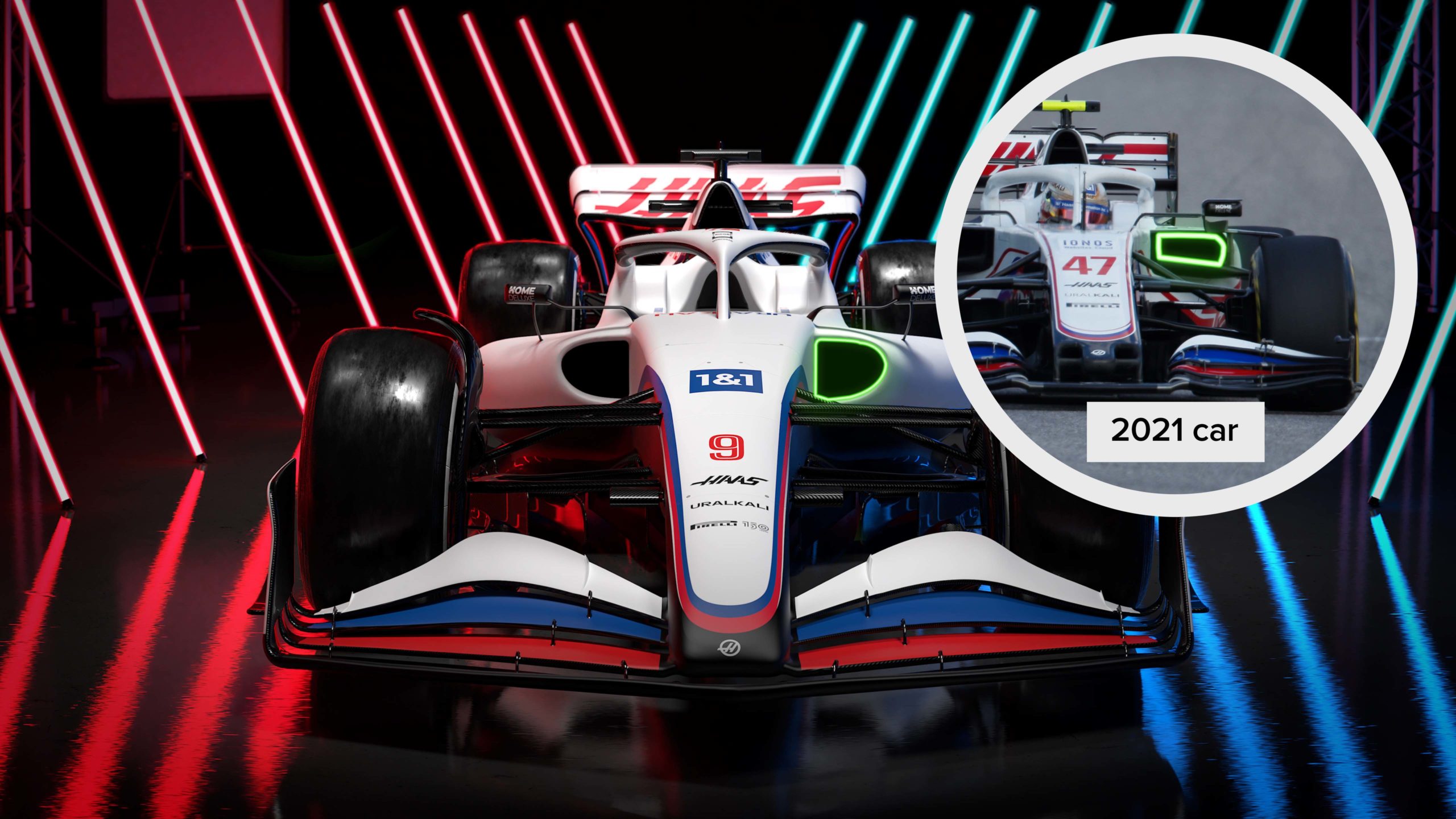 The sidepod inlets appear to be smaller than those of the previous car. It could be an optical illusion because the inlet is now all painted white (instead of black before), the sidepod is extremely bulbous, and everyone has got used to the larger inlets on the F1 demo car.

But smaller inlets would suggest that there’s probably been a bit of a step on the (Ferrari) engine front to facilitate the shrinking of them. 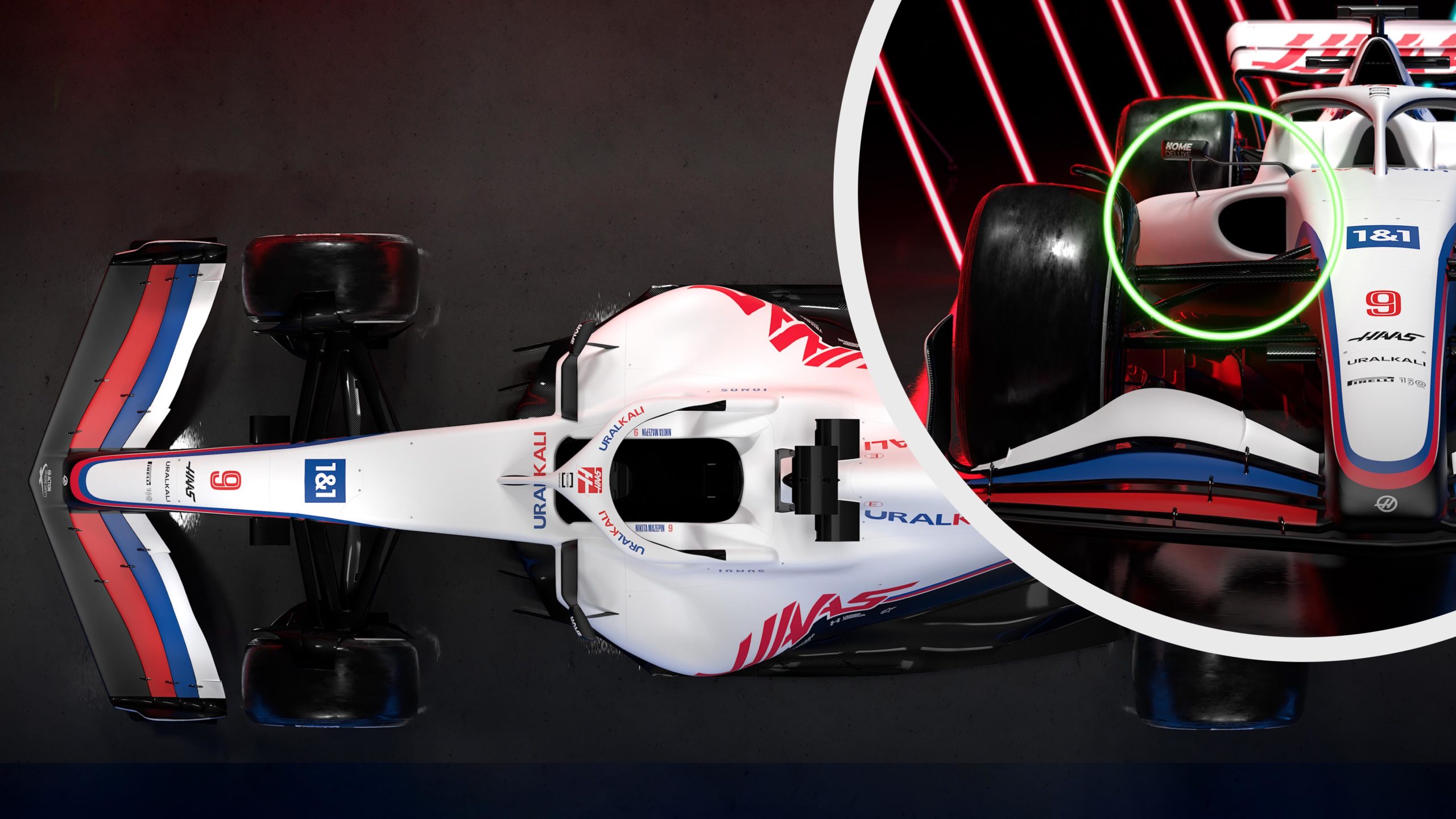 The massively bulbous sidepod is most likely a crude solution to managing the front wheel wake in the absence of finely-tuned bargeboards and front wing.

It’s a brute force approach, using a wall of bodywork to create stagnation and wake outwash, but could be effective.

The large sidepod front, particularly around the undercut area would also increase the stagnation pressure above the front floor, forcing air downwards and increasing suction on the floor leading edge.

This can help overcome the lack of suction caused by the high leading edge of the floor, mandated by the rules, which reduces the ground effect induced suction in this area 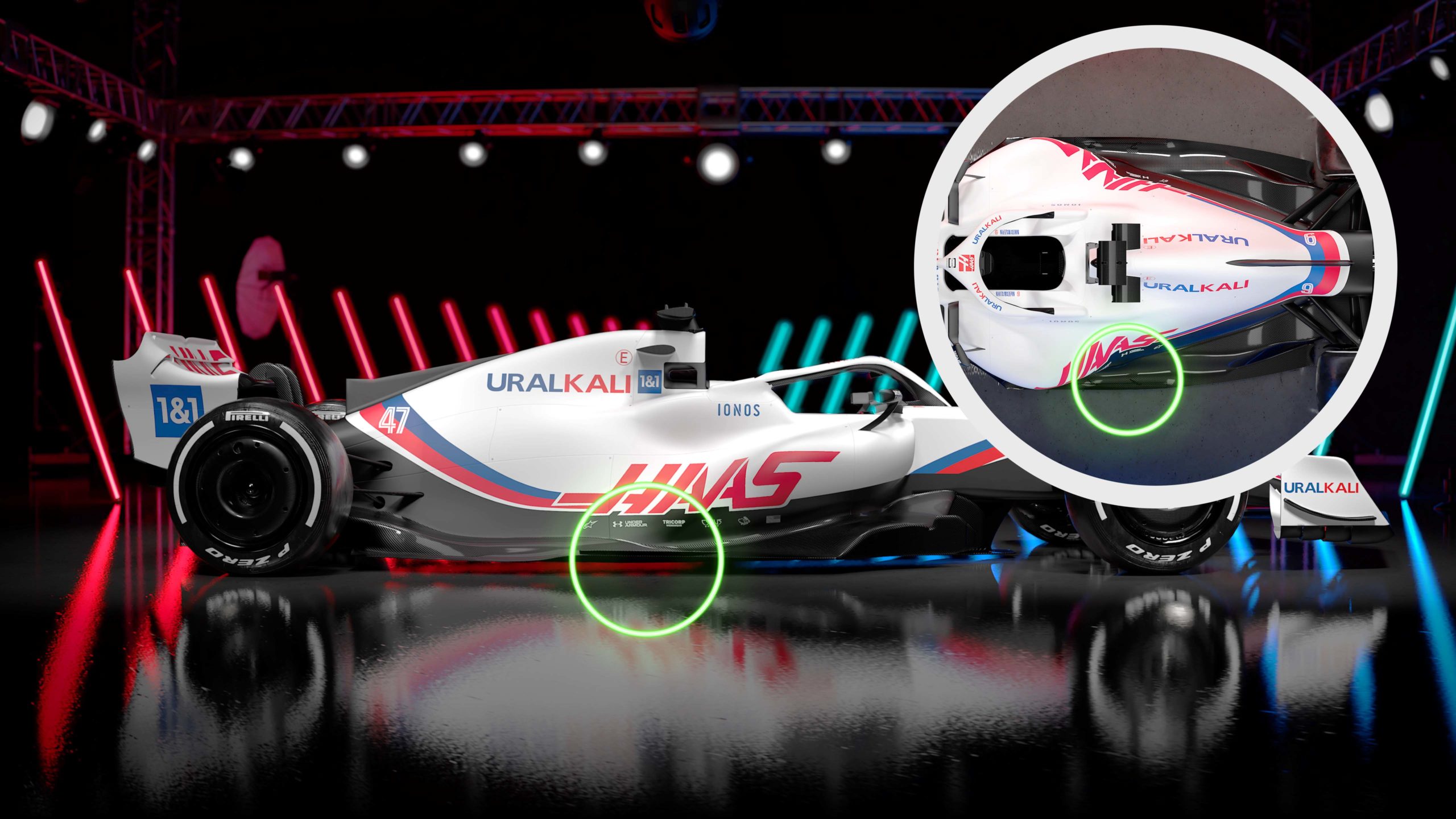 The floor edge flap and curl run in a fairly conventional manner, not that dissimilar to last year’s cars. We will probably see quite a few cars running in this manner. 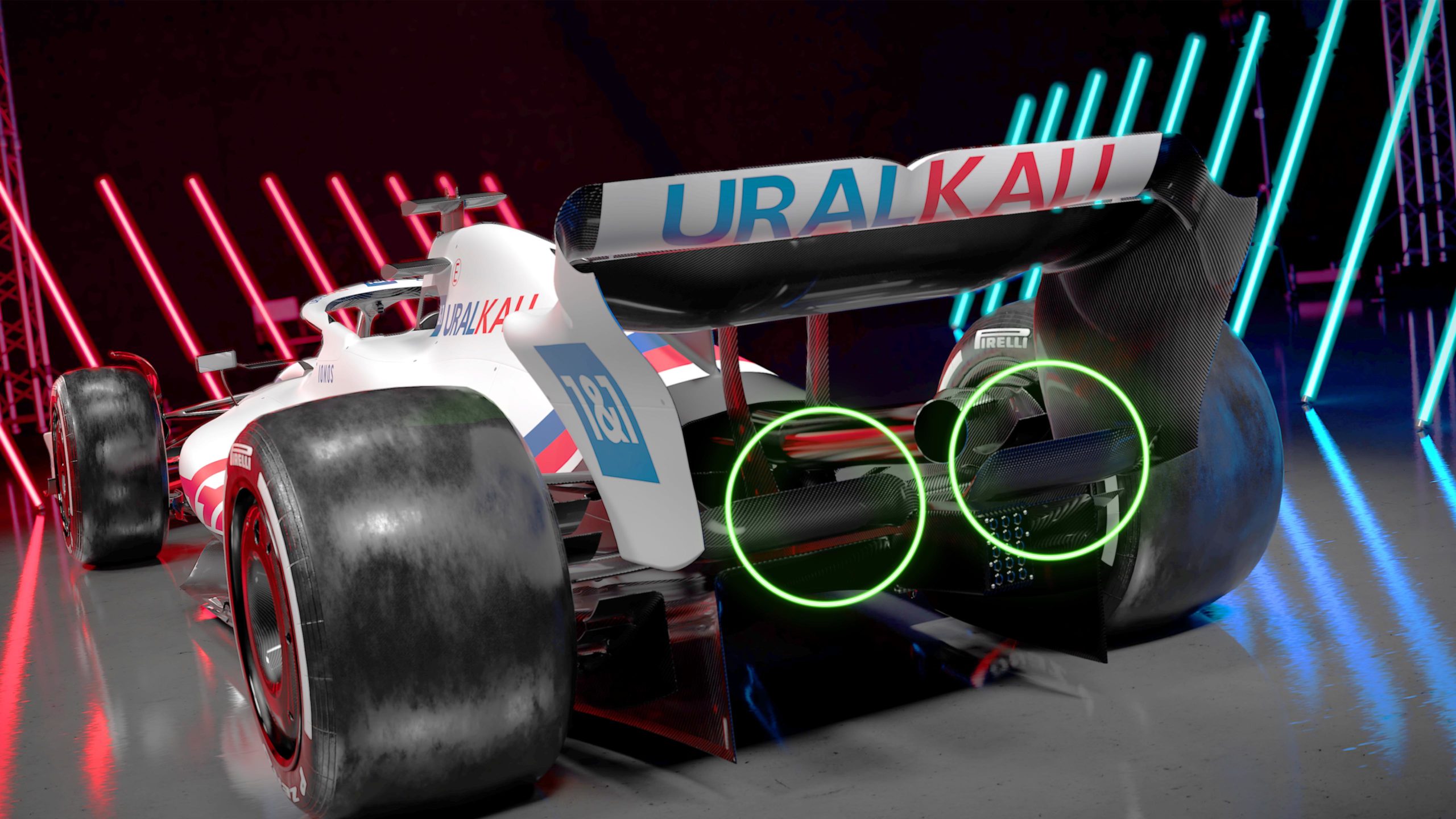 The beam wing at the rear of the car helps to pull air through the underbody channels faster, increasing downforce, and also directs the flow higher, away from following cars.

Haas have chosen to use a single element rather than the maximum two allowed, which isn’t wholly surprising because the legality box is short, so squeezing two elements in doesn’t give you a great deal of extra suction from the beam wing. 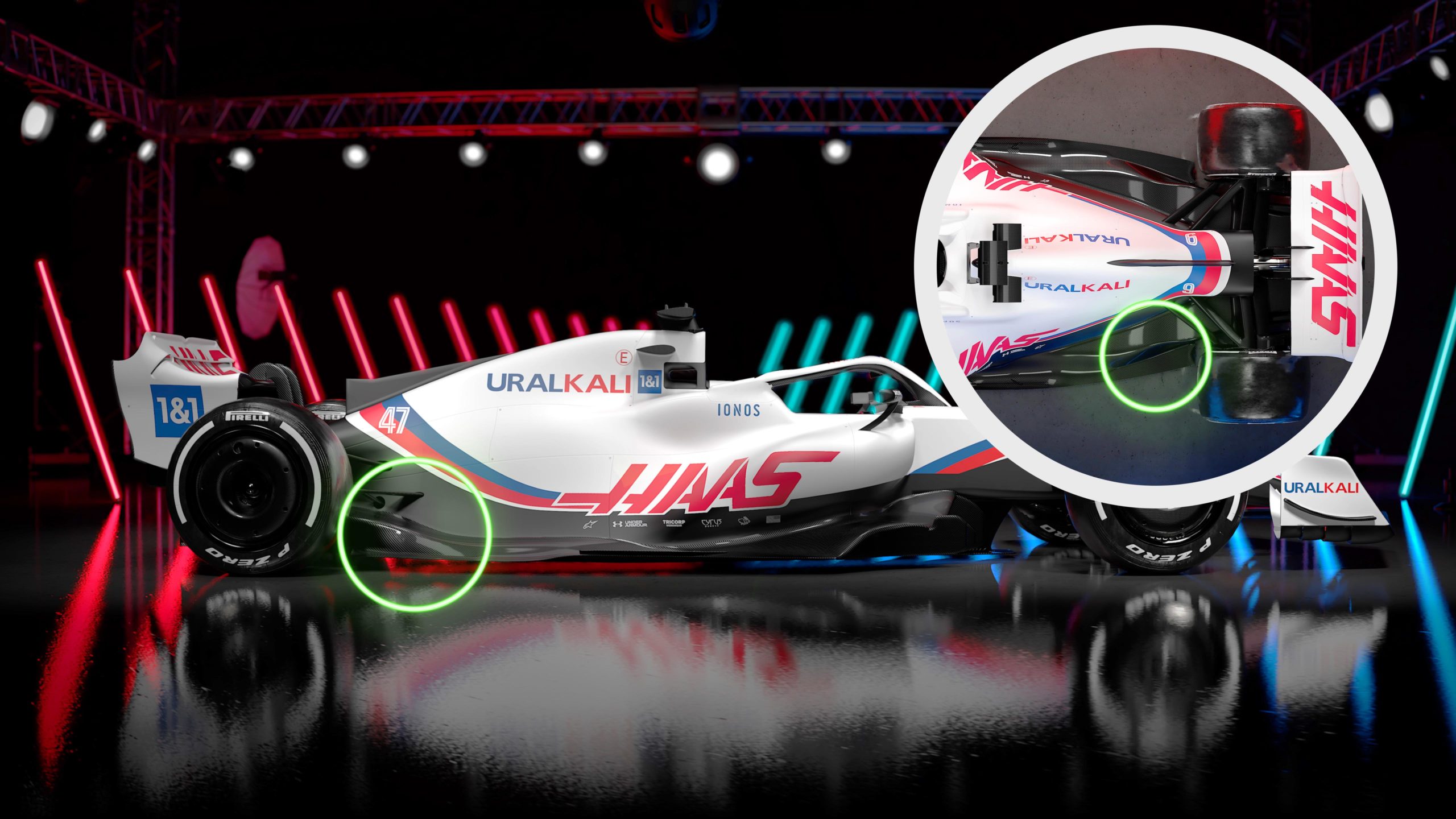 The diffuser kick essentially flares wide early before pulling to a tighter section around the rear of the flat floor portion. This is possibly an attempt to get some extra volume — and extract more air into the channels — further forwards, as well as cleaning up the vortices around the fairly sharp rules-enforced junction between the rear tunnels and the flat floor edge further back. 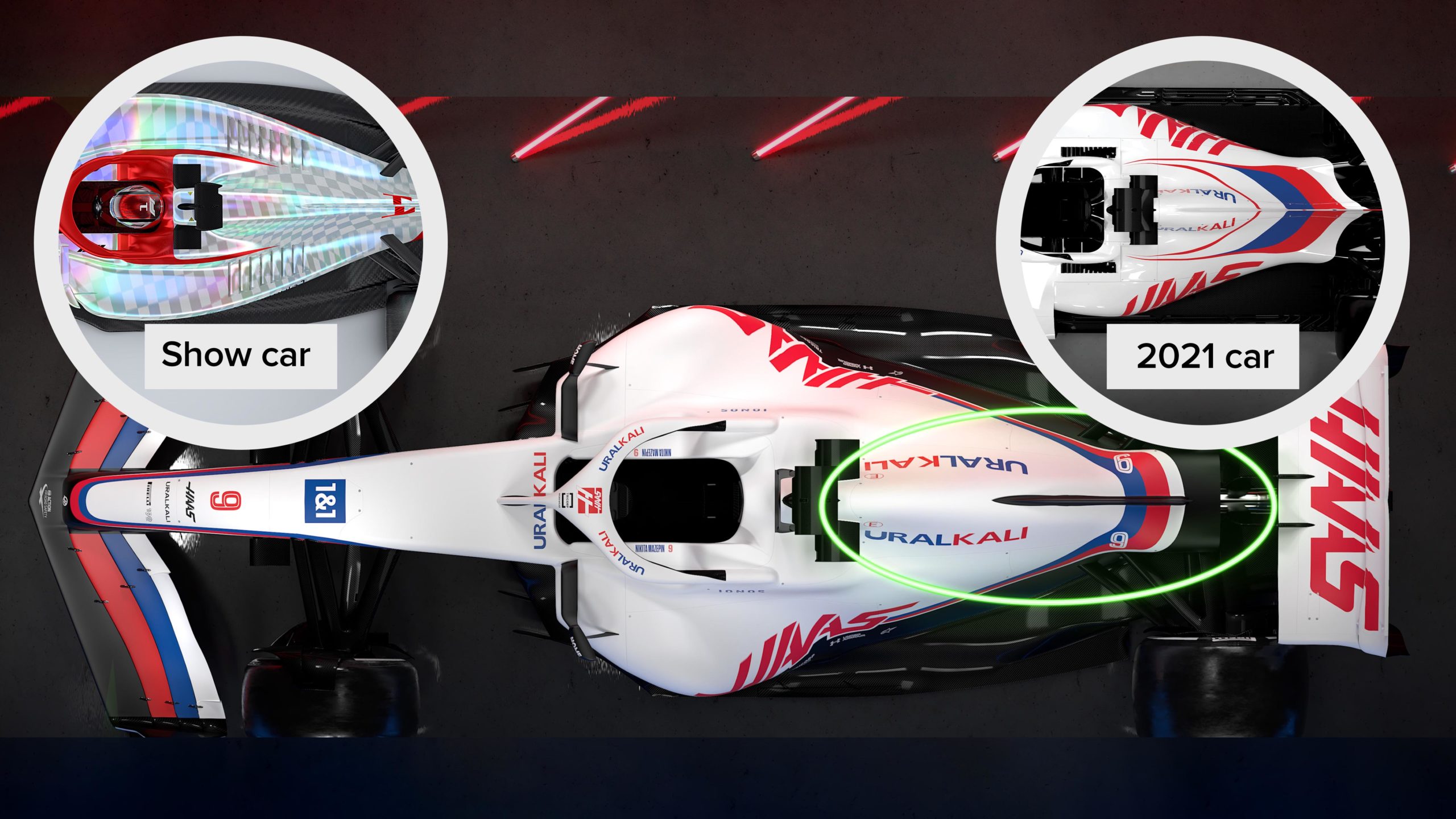 The rear coke bottle philosophy seems largely unchanged: a slow taper in with the cooling exit high. It’s a little bit flatter through the upper portion of the bodywork.

It does appear that the actual coke exit is much smaller than 2021: either this is a very low cooling configuration or they’ve taken a big step on the engine and thermal management, which would fit with smaller sidepods.

They also could be making heavy use of the new, much larger upstream louvre area, which appears on the show car, and just not showing it up on this car. 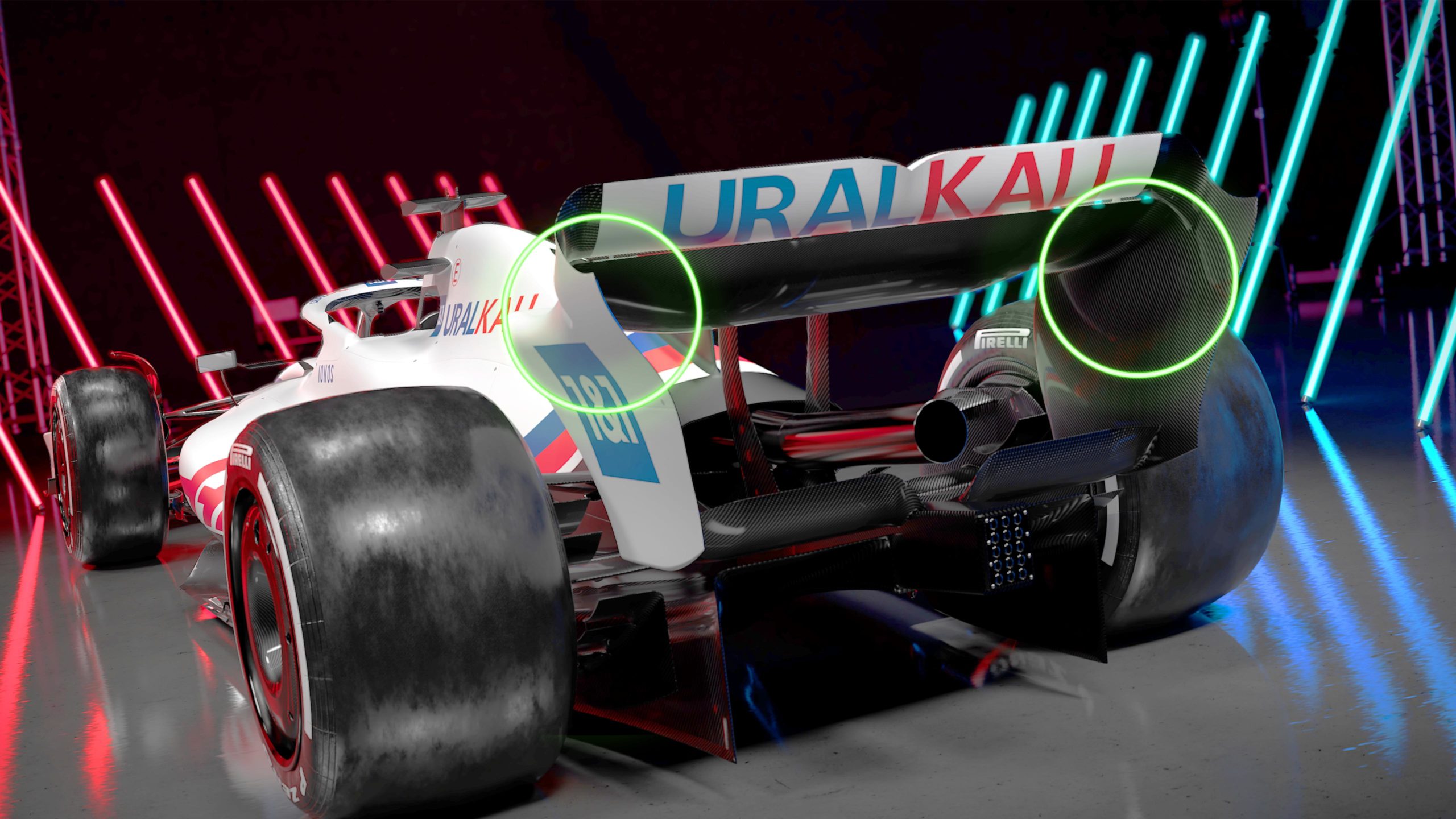 The rear wing is lightly spoon-shaped, backed off near the tips, this is likely to counteract any trailing edge separations from the compound curvature of the endplate.