With Mercedes, Honda and Ferrari spending more and more to compete in Formula 1, Renault has found its own ways to compete with the other factory teams 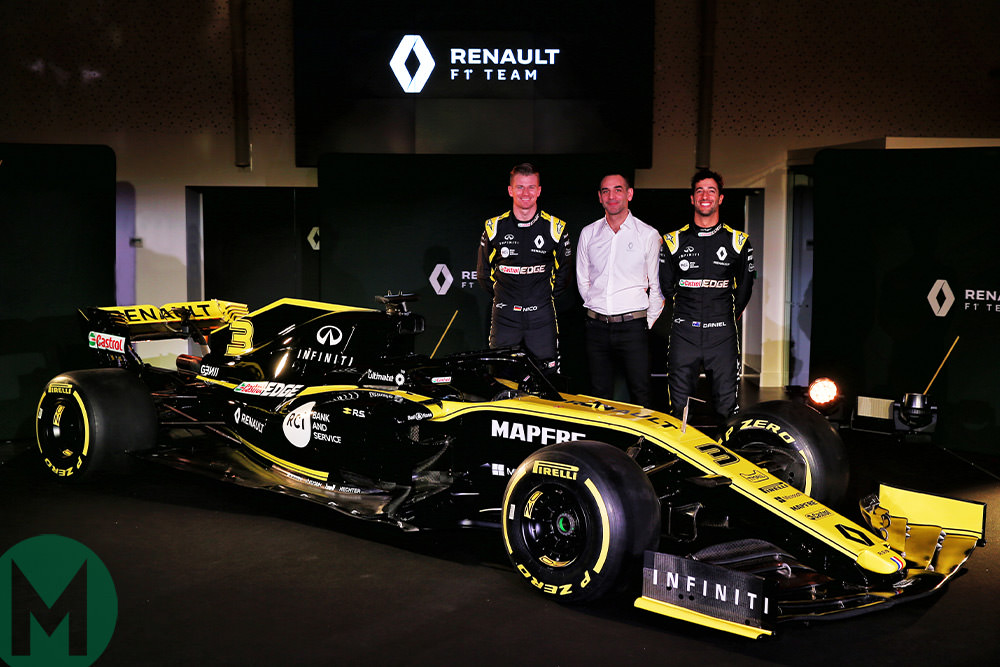 Among the factory F1 teams, Renault has always been the one advocating spending efficiencies.

Against the ever-greater profligacy of Mercedes and Ferrari (and now, apparently, Honda too), as they engage in an arms race, Renault has been the voice of sanity trying to pull Formula 1 back to a more sustainable place.

But in the meantime, Cyril Abiteboul still has the responsibility to progress Renault’s year-on-year competitive progress. It’s a delicate balancing act, and one that has seen the team’s Enstone base pulled along by F1’s competitive gravity into being massively upgraded. The facilities that have created this year’s RS19 are way beyond those behind last year’s car.

There are two massive new CNC machines churning out parts 24/7, five rapid prototyping machines, a new gearbox dyno (£5 million of investment right there), CT scanners and the composites department has tripled in size over the last couple of years. The place has been hugely enhanced and 750 people are now working there (about double that of 2016).

How does that directly influence the machine that Daniel Ricciardo and Nico Hülkenberg will race this season? Just an accumulation of small things that will add up to shaved lap times.

“These changes are not at all money-efficient,” says Abiteboul, “but they are very time-efficient.”

The rapid prototyping machines that can reconstruct powdered metal into the form of components for the actual car or just experimental parts for the wind tunnel model have given the technical team more iterations of pieces in the conception of the car. So it’s more advanced in its initial launch stage than it would have been. But it can then also be developed more quickly.

Similarly, computer-controlled milling machines that can work in pretty much any material allow, for example, the tool for a wing element to be constructed in aluminium for a greater precision of finish with an accuracy measured in microns way smaller than the width of a human hair. These things have an impact around such an aerodynamically-sensitive surface. The enlarged composites department can now turn parts around from drawing to completion in six to eight weeks (three years ago it was a 15-week turnaround).

“There’s a joint feeling, I think, that F1 has gone a bit too far”

This sort of catching up to the facilities already in place at Brackley, Maranello and Milton Keynes is behind Renault’s confidence in maintaining its upward trajectory. Upon seeing it all, it becomes a little easier to understand Ricciardo’s belief in the project.

“Two or three years ago it would not have been appropriate to have a driver of Daniel’s stature here, being frustrated and unhappy with the situation,” says Abiteboul.

“But I think we are at the right time in our evolution for him now. Put it the other way around: once it became apparent that there was the opportunity of signing Daniel and we’d said, ‘no thank you,’ how could I then go to the race bays here and ask people to work harder? It would mean I didn’t have belief in myself or Renault.”

The upgrades have been an essential part in attracting Ricciardo which in itself should bring a further boost to the momentum of the whole project. “I think so,” says the boss. “To work in an F1 team is becoming increasingly demanding for people, and when you get a driver like Daniel, people want to push flat-out and it makes my life easier when I ask them to work Saturdays or flat-out in December, for example.

“We have put in a lot of resources and investment in the last three years but among the ingredients you also need something that is igniting the mixture – and that’s the sort of thing I’d like to see from Daniel. His confidence in us should generate our own confidence in ourselves. Having him here brings an extra pressure, sure. You don’t want the guy to be disappointed by his decision, like some other famous driver – no name – that made the wrong decision at some point in their career!” But that’s good pressure, given that Ricciardo buys fully into the projected timeline.

“The timeline has not changed,” insists Abiteboul. “We aim to be fighting for podiums next year (2020), fighting for wins the year after.  This year it’s about reducing the [lap time] gap to the top teams.

“It’s clear that the next stage of progress to fight with the top teams will take a bit longer; we are humble and professional enough to recognise that. But it’s important this year to show glimpses of our ambition and I believe this can come in particular from the engine side where we have had a very strong winter.

“The step over winter with the engine is the biggest we’ve ever done in the V6 hybrid era. It’s pushing further the concept we introduced with Red Bull last year – the C spec. A number of things are completely new on it. On the Enstone side we now have the structure but it takes a bit of time before it can turn into a race winning car.”

Part of that timeline of contesting for wins in 2021 involves the other factory teams being pared back by regulation to Renault levels of spend. Which is not necessarily a given. It’s something that Abiteboul is wrestling with. “We need to know what is happening for budget and investment purposes. Where do we go from here? We are 720 people here, 30 contractors, 450 in [Viry-Châtillon].

“We are about at the budget cap limit that’s been proposed [by Liberty]. But where do I go next? I know that I’m 200 people down on Mercedes. What would you do? So we need clarity as quickly as possible.

“There’s a joint feeling, I think, that F1 has gone a bit too far. Why do we need to spend half a billion per year [the rumoured Mercedes and Ferrari spend] to race two cars? Look at the direction the world is taking.

“We can still be at the pinnacle of motor sport with lots of technological features and exciting stories without having to spend half a billion. I’m sure with half of that we could do some nice things. Look at any motor show now; look at the product line-up of the manufacturers – not just Renault: electrification changeover, autonomous driving, connectivity.

“A number of big investments that are absolutely necessary if you want to remain competitive in the automotive business. That’s why it’s important for F1 that it becomes more reasonable because there is going to be big pressure on any other kind of spend outside these new automotive technologies.”