The Portuguese Grand Prix takes place this weekend in Portimao.

The Portuguese GP will start at 3pm on Sunday afternoon.

Every session is live on Sky Sports F1 on all three days of the weekend. Coverage begins on Sky at 2pm on Saturday and 1:30pm on Sunday, lasting until 4:30pm and 6:30pm respectively.

Highlights will also be available after qualifying and the race on Channel 4. Highlights from Saturday’s action begins at 6:30pm with the race highlights on Sunday beginning at 7:30pm.

Radio coverage will also be available all weekend on BBC Radio 5 Live Sports Extra, with coverage beginning five minutes ahead of each practice session and lights out on Sunday.

F1 is available on NowTV as an option for viewers to stream the race online. The package offers Sky Sports coverage all weekend for each session live and as they happen.

The Red Bull versus Mercedes fight is set to continue this weekend with Max Verstappen and Lewis Hamilton heading up their respective teams. Last season in Portugal, Hamilton began conservatively and lost positions at the start but he cannot afford to repeat this approach against his title rival for 2021. 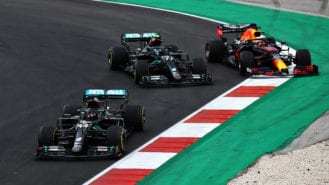 Mercedes off the hook? 2021 Portuguese Grand Prix - what to watch for

Verstappen showed just how aggressive he’s willing to be in wheel-to-wheel combat with Hamilton last time out. He forced the Mercedes driver over the kerbs fighting for the lead of the race at Imola, and came out on top in that battle.

While overtaking stands to be a little bit easier in Portimao, the opening few laps will be critical to the outcome of the race, with Mercedes possibly the faster package in race trim against the Red Bull but lacking over the course of a single flying lap.

Does that tip the scale in Red Bull’s favour then? Possibly. Mercedes has shown it can dictate the strategy in much the same way that Red Bull has done in the past when it has a sniff of victory but not leading the race.

In Bahrain things worked out for Merc as Hamilton put up a great defensive driving display to take the season-opening race. In round two though the reigning champions couldn’t make the strategy work for them after a slow pit stop allowed Verstappen back into the lead despite the possibility of a successful overcut.

Watch out for race runs in FP2 over the final pre-qualifying warm-ups of FP3.