The second of the back-to-back races brings Formula 1 back to familiar ground at the Circuit de Catalunya Barcelona for round four of the 2021 F1 season.

How many laps is the Spanish Grand Prix?

The Spanish GP is scheduled for 66 laps. There is around a 40% chance of rain in the afternoon on race day.

Sky Sports F1 will show every session on all three days of the weekend live. Coverage on race day begins on Sky Sports F1 at 12:30pm lasting until 4pm. Qualifying coverage begins at 1pm on Saturday.

Radio coverage will also be available all weekend on BBC Radio 5 Live Sports Extra, with coverage beginning five minutes ahead of each practice session and 10 minutes before lights out on Sunday.

The Spanish Grand Prix weekend is available on NowTV to stream online. The package offers Sky Sports coverage of each session from Friday to Sunday including the pre and post-race coverage on Sky Sports F1.

It is still a game of fine margins at the front between Mercedes and Red Bull and that is set to continue at the Spanish Grand Prix.

So far this season, Lewis Hamilton and Max Verstappen have traded wins but it’s currently two-one in the Mercedes driver’s favour after his win in Portimao last weekend.

The W12 has been a tricky car to rate in terms of outright performance across the board but it currently looks as though the reigning champions shine on a Sunday allowing Red Bull the opportunity to secure pole position on Saturdays. 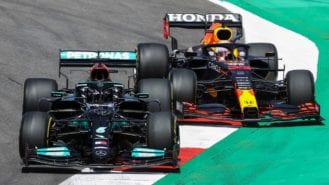 Verstappen’s mistake on his first Q3 lap deprived him of pole though it may have been difficult to hold Hamilton off anyway with the kind of mood he was in on Sunday in Portugal, but overtaking at the Circuit de Catalunya Barcelona is only going to make qualifying even more important this time.

If Red Bull’s star can get his lap together and battle track limits successfully this time, a pole could turn into victory unless Mercedes can show the same kind of speed during the race as it did in Portugal.

If not then Verstappen is fully capable of dictating the pace out in front, taking good enough care of the tyres and seeing off the threat from behind.

However, all of that could go out of the window if late-afternoon rain materialises. Currently, there is a 40-60% chance of rain that will increase as Sunday wears on.