It’s Ferrari’s home race, 55 miles down the road from its Maranello factory, and it’s a certainty that the tifosi will be  euphoric as the Scuderia targets a third win in four races to cement its position as this year’s leading team.

But Ferrari’s long-term fans will know that nothing can be taken for granted, and especially not this weekend. Each of its main rivals are likely to bring major upgrades to the race: Red Bull will be looking to edge ahead of the red cars, while McLaren and Mercedes aim to close the sizeable gap to the front of the grid.

With unpredictable performance and the prospect of more contenders joining the battle for victory, it’s a fitting weekend for more on-track competition in the first sprint race of the year.

Drivers will face off in qualifying before racing in the 30min sprint on Saturday, which will set the grid for Sunday’s Grand Prix.

The rules have been tweaked this year, so the sprint race carries more weight: the winner earning eight championship points instead of the three last year, with the top eight finishers now all being awarded points.

We’ll see how teams change their approach with the greater rewards on offer, and how the upgrades change the title race — all staged on the historic, narrow, Imola circuit.

How to watch the F1 Emilia Romagna Grand Prix

Tune in live, or catch the highlights: here’s when you’ll need your TV or device ready for the key sessions. Times are GMT.

Where to watch every session

All sessions will be live on Sky Sports F1, including pre- and post-race coverage. If you miss the live coverage, Channel 4 will be broadcasting the highlights of the sprint race and Grand Prix after both have finished.

Both Sky Sports F1 and Sky Sports Main Event will start coverage of the race at 12.30pm. Highlights on Channel 4 will start at 6.30pm on Sunday afternoon.

Sky’s live coverage of each session is available on Now TV with a sports membership, and you can stay up-to-date with the action regardless of your location. The app can be downloaded on mobile and tablet devices. Weekend passes are also available which give you access to all the live sessions including pre- and post-race coverage.

Overall, Ferrari has had the fastest car this season, along with reliability that Red Bull has lacked. As well as the peerless form of Charles Leclerc, the team also has Carlos Sainz, buoyed by a contract extension signed in the lead-up to the weekend.

So it’ll take a strong package to defeat Ferrari. Something like Max Verstappen in an upgraded Red Bull…. 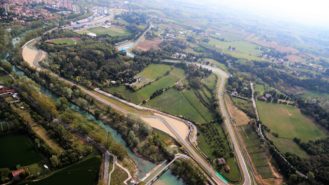 Sprint and slipstreams: 2022 Emilia Romagna GP what to watch for

Will Ferrari reign supreme around a happy hunting ground or can Red Bull go back to back at Imola?

After three opening races where Verstappen and Leclerc were trading tyre rubber, another round of their entertaining duel is a likely – and mouthwatering prospect.

There’s every chance that they will be joined by Sainz and Sergio Perez, while Mercedes believes that solving its major problem — the bouncing, or porpoising at high speeds — will unlock significant performance and see the Silver Arrows in a familiar role at the front.

The weather may also play a part. Qualifying currently looks likely to be wet, with a chance of rain for the Grand Prix too. How that will affect the performance order is not yet known.

How many laps is the Emilia Romagna Grand Prix?

The 2022 Emilia Romagna GP, held at Imola, is 63 laps long. There will be a single DRS zone on the three-mile circuit: along the start/finish straight where speeds can exceed 200mph.