Lewis Hamilton (1st)
In the words of Eddie Jordan: “Lewis Hamilton is back”. Well, he never really went away, but McLaren has managed a Lazarus-like return to form. Hamilton didn’t luck into this win, he drove brilliantly, and we can now see why he described the Hungaroring as one of his favourite tracks. Hats off to the men from Woking. 10/10

Kimi Räikkönen (2nd)
After a good start Räikkönen pushed the Ferrari for all it was worth. This was the Finn back on form and he gave Ferrari something to cheer after the shock of Saturday when Felipe Massa was airlifted to hospital. Kimi was lucky to not be taken out by Webber in the pits after the Red Bull driver was released into his path. 9.5/10

Mark Webber (3rd)
The Australian was more than a little surprised that the McLaren and Ferrari were so quick but did well to pick up six points. Crucially he beat team-mate Vettel off the line and is now ahead of him in the championship. 9/10

Nico Rosberg (4th)
A strong race for the Williams driver who constantly put in competitive lap times and was unlucky not to get closer to the podium. There hasn’t been much press about the team this season, but it’s doing very well to keep up with the pace of development of the manufacturer teams. 9/10

Heikki Kovalainen (5th)
Had problems with overheating brakes in his third stint but couldn’t match Hamilton’s pace. He had the same updates as his team-mate this weekend and will no doubt be annoyed he didn’t make more of the situation. 7/10 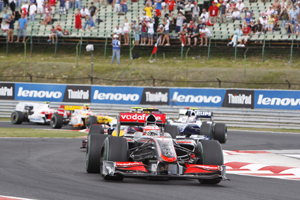 Timo Glock (6th)
Fourteenth on the grid to sixth overall. Great drive and one that will leave him annoyed not to have qualified higher up the grid. It seems strange to think that the Toyota’s were P1 and 2 in qualifying in Australia… Here’s hoping they can get back there before the board of directors deems F1 ‘too expensive’. 9/10

Jenson Button (7th)
Started with a lot of fuel on board and then struggled with the tyres throughout the race. “After four laps my tyres were destroyed,” he commented afterwards. Started to post slightly more competitive times on the harder compound in his third stint, but it was too little too late. He’ll be thanking his lucky stars that McLaren and Ferrari are taking points away from the Red Bulls. 6/10 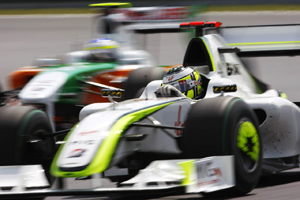 Jarno Trulli (8th)
A solid race, but not one to write home about. There hasn’t been much said about his plans for next season, although now that Glock seems to have the measure of him again he’ll need to raise his game. Still, one point from a race where he never looked that quick isn’t all bad news. 7/10

Kazuki Nakajima (9th)
Another race where he just hasn’t kept up with his team-mate. He was unlucky not to get a point after being stuck behind Trulli in the closing laps though. 6/10

Rubens Barrichello (10th)
Started with a veritable tanker of fuel on board and dropped down to 18th off the grid. Not the Brazilian’s weekend – where have we heard that before? And he isn’t the only one who will be left wondering how the team has lost its way so badly. 5.5/10

Nick Heidfeld (11th)
Qualifying 16th and finishing 11th is not a situation that BMW is going to be happy with. In fact, there’s not much to be happy about this season at all with the car showing signs of pace only for it to disappear again. At least Heidfeld now has time to run competitions to design his new helmet. 5/10

Nelsinho Piquet (12th)
Ah Nelson, Nelson… This weekend he had the same updates as Alonso and his team asked him to “go and show us what you can do”. It would be all very well finishing 12th if your team-mate hadn’t put the car on pole (on a very light fuel load admittedly) and led the race until the first pitstops. I fear his F1 career has as much life left in it as Hamilton’s chances of defending his championship. 4/10

Robert Kubica (13th)
The pole didn’t qualify too badly (ninth) but just dropped further and further back in the race. How long do we think it will be before one of the heroes of 2008 will be in another car? Second seat at McLaren? Or Ferrari now that Massa may be out for the rest of the season? 4/10

Giancarlo Fisichella (14th)
Wouldn’t have finished so far up – if you can call 14th that – if it weren’t for a reasonable number of retirements. The team’s strong recent performance looks like it may have been a ‘one off’. 5/10

Jaime Alguersuari (15th)
The new kid on the block had an extremely successful weekend. Having done two straightline tests in a Formula 1 car he managed to keep it on the Tarmac and started to post good times later in the race. He wouldn’t have been anywhere near his team-mate if it wasn’t for him leaving the track, but still, he’s avoided leaving Toro Rosso with egg on its face. 6/10

Sebastien Buemi (16th)
Drove well until dropping it at turn two and slipping down the order. Let’s hope that Alguersuari can keep Buemi honest for the rest of the year and they can push each other forward, otherwise Toro Rosso will continue to be ‘also ran’. 5/10

Sebastian Vettel (17th – RET)
Vettel made a bad start and complained about “something” being broken after contact with Räikkönen at the first corner. Things didn’t get any better and the German eventually retired, notching up his fourth DNF of the season. 4/10

Fernando Alonso (18th – RET)
Qualified on pole and then built up quite a gap in the first stint before slowing when his tyres went off. However, the front right wheel wasn’t put on properly at his first stop and left him with severe vibrations before it fell off completely. The team has been disqualified from the next Grand Prix as a result (appeal pending), and Alonso was left saying “this is motor racing”. He must be fuming. 9/10 (Renault pitstop crew, especially the lollipop man: 2/10)

Adrian Sutil (19th – RET)
He never threatened to score points or finish much higher up than Fisichella, but his race was effectively over before he even completed the warm-up lap. The water temperature on the Force India rocketed before the start and didn’t improve – one lap and it was game over. 2/10

Felipe Massa (DNS)
Our thoughts are with Felipe and his family after such a horrific and unfortunate accident in qualifying. As I write Massa is stable in hospital and making good progress, so here’s hoping he is up and about soon and can return to racing asap. 10/10 for recovering so well so far. 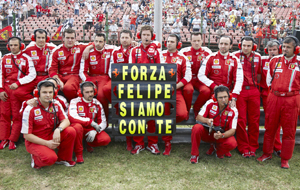