Jenson Button is going to be a busy man this year, which is just how the 2009 Formula 1 world champion likes it. At 41 and now a proud father of two, he’ll be juggling his new role as an advisor to Williams in Formula 1, he has Jenson Team Rocket RJN to think about – including its ambitious campaign in the new GT3-based DTM – and he’s also going one step further than Lewis Hamilton and Nico Rosberg by driving for, as well as owning, an Extreme E team. He won’t be getting bored.

Last September, I caught up with Jenson to talk about his ambitions in team ownership, and what really struck me (even via Zoom) was how the energy, drive and intelligence that propelled him through 18 intense seasons of F1 still shine as bright as they ever did since he somewhat reluctantly stepped down from McLaren at the end of 2017. In fact, Button is buzzing right now, loving life and very clearly still completely besotted with motor sport.

One clear message I couldn’t miss from our conversation is that he still views himself very much as a racing driver – in the present tense, not the past. “The first couple of years out of F1 I was thinking what am I going to do in the future?” he said. “I didn’t have any direction to go with my life and work, but there have been some really good opportunities in the past six months. I’m really looking forward to the future – but with everything I’m doing, the team, the TV work [with Sky F1], it’s not about driving, and I need to find out where that fits in. I have to race. I’m a racing driver. It’s always been my life and it’s what I’m best at.”

“As long as you keep on top of your fitness and the love is still there, why not?”

Emphatic, don’t you think? That’s why I was mildly surprised that when he announced his team ambitions for the DTM he stopped short of naming himself as a driver for the German-based campaign. The subsequent announcement of his plans for Extreme E, the new all-electric off-road series, went some way to explaining why. But it’s hard to imagine he’ll limit himself to those five events, especially as seat time will be bound by the range of the awesome-looking and powerful Odyssey 21. As he tells Robert Ladbrook in a forthcoming interview for the magazine, the British GT cameo at the end of last season was likely just a first taster for GT3, and back in September he even admitted to me that he came close to an Indycar deal in the summer. Although he did rule out racing on ovals. Something about valuing his feet too much, I suspect, especially given his addiction to exercise.

Button also revelled in his maiden experience of Le Mans with SMP Racing’s BR1 prototype in 2018, and I’d put money on that last-minute appearance not being his sole start at the 24 Hours. Like just about everyone outside of F1, he’ll have at least one eye trained on the forthcoming Hypercar/LMDh era as an opportunity to win perhaps another world title and the biggest endurance race in the world – either as a driver, team owner or preferably both.

Button believes age is no barrier to his burning ambition to keep his foot in. Reflecting on the passing of his 40th birthday, he told me: “It’s a weird number. I remember my dad’s 40th and thinking ‘that’s so old’, but it’s so not. As long as you keep on top of your fitness and the love is still there, why not?”

But while driving will clearly continue to be central to his life, it’s the team ownership and advisor projects that are perhaps more significant, in terms of what Button has to offer motor sport. Make no mistake, he’s loving his experience of owning a team and the advisor role at Williams might be more significant than it first appears.

Plenty of drivers have taken on such positions in the past, of course – with varying levels of commitment and success. Niki Lauda took it seriously and carried significant influence first at Ferrari but more obviously and successfully at Mercedes, while in contrast Michael Schumacher never looked comfortable hanging around at grands prix in the Ferrari pit during what turned out to be his break from driving before his ill-starred comeback in 2010.

It’s hard to believe 20 years have passed since 20-year-old Jenson Button made his Formula 1 debut for Williams, in just his third season of car racing. As Frank and…

So how will Button approach his role at Williams? It would be a major surprise if he didn’t dive in and get his hands properly dirty, because he’s not the sort of guy to do anything half-heartedly. In fact, here’s a prediction: I reckon Button could be a future Christian Horner (albeit with a slightly more successful driving career behind him!), either at Williams or elsewhere. In fact, Jenson might well turn out to be one of the most significant and high-profile figures in racing over the course of the next couple of decades.

Why? Well, we’ve already covered his love and commitment to racing. But there’s more to what he has to offer than that.

I first met him as a slightly shy 18-year-old, during his first season racing cars in British Formula Ford. Back in 1998, his pure talent was all too obvious, but what also soon emerged was his capacity to soak up and deal with any challenge that presented itself. Just two years later, after one season in Formula 3, he was a teenage F1 driver with Williams. Everything was coming at him so fast, including the knowledge that he was likely to lose his drive to Juan Pablo Montoya for 2001. But the composure rarely broke, even in that sophomore season when he’d moved to Benetton and endured a nightmare spiral that could have ended his career right there. Instead, he dug in, learnt important lessons from a tough experience and came back better.

It was during his years at BAR/Honda that Button’s true leadership qualities emerged. This was a team with the potential to be a genuine ‘big beast’, as the title year in its guise as Brawn GP and more emphatically as Mercedes-AMG subsequently proved. But Button’s influence from the cockpit, particularly in those pre-Ross Brawn years, should not be underestimated. Increasingly confident not only in his knowledge and technical understanding of F1, Button stepped up as a pivotal, almost totem figure at that team – which is partly why he was ready to become world champion when the opportunity so unexpectedly presented itself in 2009.

It’s such nuggets of vast experience working with great people that make Button a man not to be underestimated. Time spent with Frank Williams, Patrick Head, Brawn, Ron Dennis and the many engineers he has gelled with – this is the foundation of what he brings to Jenson Team Rocket RJN, to Williams and possibly to other F1 teams in the future.

He also knows his way around a paddock in terms of the politics, having paid a high price for his education. It was hard not to smile when it was announced he’d rejoined Williams given that this deal represented ‘third time lucky’. After that single season in 2000, he remained tied to the team and was essentially on loan to Benetton/Renault, and by 2005 was ready to go back to where he started, making a call that the Williams-BMW partnership had more potential than BAR-Honda – despite the success he’d enjoyed with the latter in 2004. 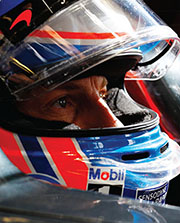 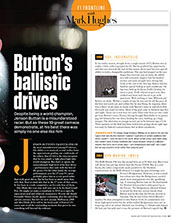 Jenson Button’s talent is one of the most misunderstood among F1 drivers. His ability is so nuanced, a total outlier from the approximate grading one could make of the others, that…

As it turned out, it was just as well BAR boss David Richards won the case with the Contracts Recognition Board and forced Jenson to stay at the team, given that Williams and BMW were about to divorce. But not before Button had again signed for Frank for 2006 – a decision he quickly regretted. Back-pedalling furiously to get out of that deal and stay at Honda is reputed to have cost Button many millions of his own money.

That experience always reminds me of what Keith Richards always says about Allen Klien, the ruthless businessman and manager who in the mid-1960s struck the greatest record deal for The Rolling Stones that any band had ever seen, then subsequently bled them dry. “Price of an education,” was ‘Keef’s’ verdict on the man.

Button would surely understand. He’s paid his dues, he knows the sport – and crucially he knows the business. Watch him fly.