The warnings had been fairly bleak. The circuit, we were told, wasn’t so much in the middle of nowhere as teetering on oblivion’s edge. Restaurants were few and far between… and most local hotels apparently doubled as brothels. Fortunately, first-hand experience is a more reliable gauge than rumour.

Had the Korea International Circuit been built within an easy train ride of Seoul, a wonderful, friendly, cosmopolitan city that fuses ancient with modern, it might have become an instant favourite with the Formula 1 community. Instead, though, it was constructed in Yeongam, towards the nation’s southern tip, more than three hours from the capital by train (although a first-class seat cost about £35 and came with complimentary wifi). Restaurants proved to be plentiful, diverse and very reasonable – although the bit about hotels had an element of truth. That much became apparent when a colleague and I – both heterosexual, middle-aged blokes – checked in to our room and were given welcome packs that included condoms and assorted scented creams. It wasn’t so much a brothel, more a place that young couples used when they wanted a few hours alone, away from the family homes in which most were obliged to live through lack of income.

There had been scare stories about the circuit’s prospects of being finished in time for the big weekend – and on Thursday morning these seemed to have substance. Soldiers worked frantically on flimsy scaffold frames in a bid to complete the grandstands – and some were barely started. It didn’t aid productivity that they stopped to wave every time a group of western visitors passed by on an exploratory track walk.

The circuit itself looked fine, the first sector replicating elements of Monza (long straights, slow turns), the second blending Silverstone-style sweeps with topography redolent of Spa and the third tapering in, run-off areas being replaced with an unyielding concrete fringe – more like Valencia than Monaco, but distinctly street circuit in spirit. We paused at Turn 13 to take photographs of a snake – venomous potential unknown, but we were later told it was likely to be more harmful to rodents than humans. 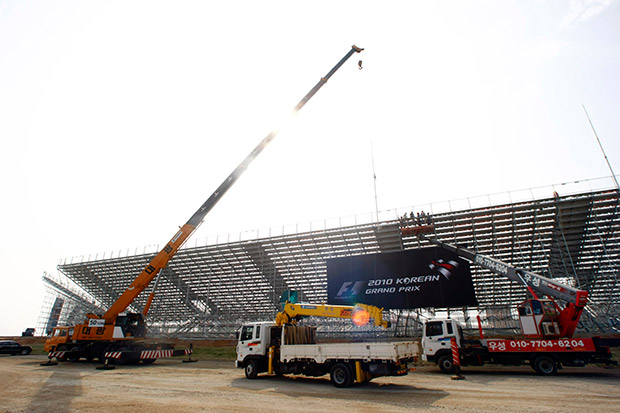 Some foundations had been laid for what, we were told, would soon be a thriving city through which the track would run. And over there, behind the media office, was a lagoon that was ripe for conversion into a bustling marina. Should be ready by 2011, we were promised.

Against expectations, the army’s overnight toils created a full array of grandstands by Friday morning – although there weren’t many spectators to fill them – and the circuit proved encouragingly lively. That was particularly true of Turn 16, where a significant compression caused cars to bottom out spectacularly before they were spat down the road. Officials decided this was too much of a good thing, however, and smoothed the contours overnight. A few other minor details had to be tweaked, too, but the track was raceable… until monsoon conditions struck on Sunday.

The Red Bulls of Sebastian Vettel and championship leader Mark Webber had annexed the front row in dry conditions on Saturday, but interminable rain meant a controlled start was inevitable the following afternoon. Even that had to be delayed by 10 minutes and safety car speeds subsequently proved treacherous. “I can’t even see my front tyres,” said Jenson Button, on Radio McLaren. “I’m driving completely blind, just waiting to hit somebody.” It didn’t take long for the message to percolate and after three laps the red flag was shown. Darkness strikes early in South Korea and it looked increasingly unlikely that the country’s inaugural Grand Prix would run its course, if indeed it ever restarted at all. 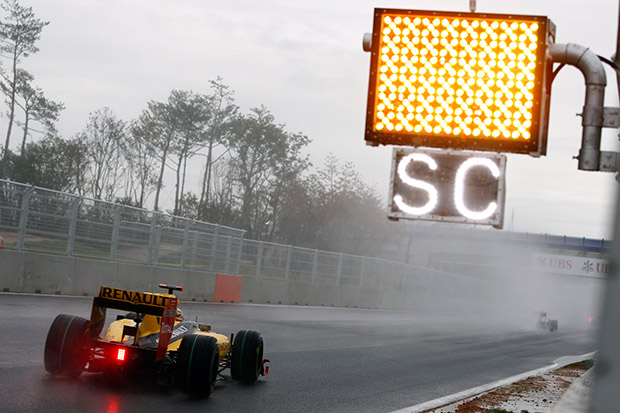 After a lull of almost 50 minutes, the field set off again – still behind the safety car – and was not released until the end of lap 17, with Vettel leading from Webber and Fernando Alonso. The Australian spun off within two laps, however, striking the Turn 12 wall and bouncing back to collect Nico Rosberg’s fourth-placed Mercedes. It would be only the second time all year that Webber had failed to score. Safety car driver Bernd Mayländer duly reappeared and at this rate it seemed feasible that he might score a couple of points…

The race resumed on lap 23 and Vettel immediately pulled a couple of seconds clear. His progress was soon interrupted, however, when Sébastien Buemi made an ill-judged attempt to usurp Timo Glock’s well-driven Virgin and simply barged the German off the road. Out came Mayländer, albeit too late to allow either Vettel or Alonso to make the pit entry. They were obliged to complete a lap at reduced speed, which enabled Lewis Hamilton to get between them after the stops, but Felipe Massa – leading the rest of the pack – drove at leisurely speed on his out lap, ensuring Alonso dropped no lower than third. Hamilton then ran wide at Turn One following the restart and the top two continued as before… until Vettel’s engine failed with 10 laps remaining.

Alonso went on to win from Hamilton and Massa, with Michael Schumacher, Robert Kubica and Tonio Liuzzi completing the top six. By the time the podium celebrations began, it was almost pitch dark. 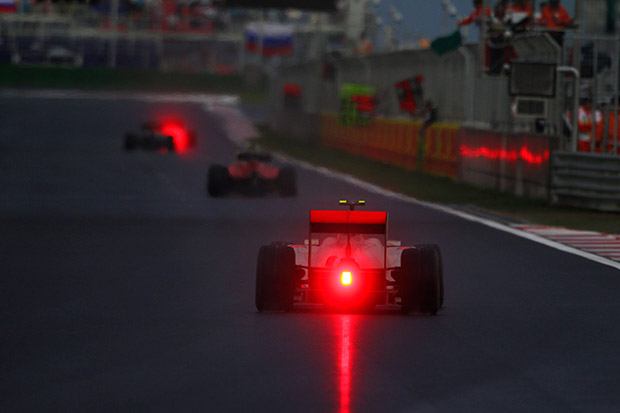 The result gave Alonso the championship lead, but he wasn’t the only one who left Korea in a positive frame of mind. It hadn’t been a particularly straightforward weekend, but things had been more streamlined than anybody dared to hope and the track had the potential to become a classic.

When next we returned, however, it felt as though they’d locked the gates a year beforehand – and left the place untouched. The city and marina developments remained dormant – and not much has changed since.