Somebody had been busy with their pruning shears – and a broom. The slender path to 130R had been cleared of its customary foliage and spiderwork, but many an element of rusty wire remained to snag the unwary. It was less of a nature trail than usual, but still something of an assault course. 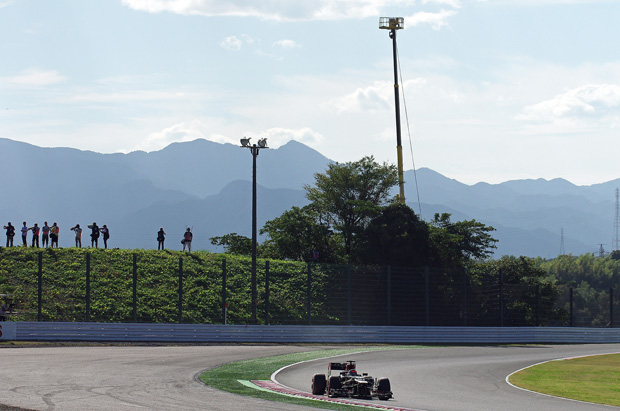 Once you’d negotiated the framework of various advertising hoardings, the route broadened and led to the grass mound mentioned yesterday, a regal perch that bisects the two Degners and 130R.

From on high the cars’ contrasting body language was the usual study in fascination – even between team-mates. The Red Bull looked utterly stable through the Degners – and everywhere else, come to that – while the Marussias had more in common with Mk2 Escorts. After Jules Bianchi momentarily flicked sideways at Degner Two, his right rear suddenly gripped and spat him into the tyre wall. Damage was such that he had to sit out the afternoon while the team built up a car around the spare chassis (although he was still half a second quicker within a matter of laps than team-mate Max Chilton managed all day). Chilton, though, did pull off one tremendous save when he looked bound for the wall. 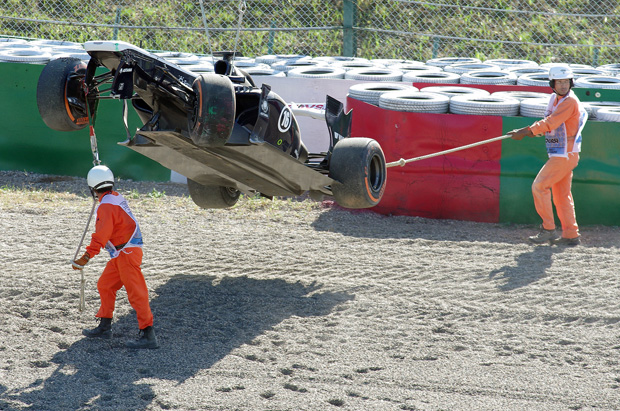 Pastor Maldonado went off in the morning, after leaving the pits with an incorrectly affixed left rear wheel that detached after a couple of laps (earning the team a €60,000 fine), then flirted with the Degner kerbs on his first flying lap in the afternoon. Logic dictated that he should rein things back from that point, but a few minutes later he did it again and ploughed into the tyres. Valtteri Bottas, having his first race here, showed rather greater circumspection (although he wasn’t particularly fast, the Williams FW35 not permitting such luxuries).

It has become common knowledge that Sergio Pérez’s continued employment at McLaren is by no means guaranteed – and he could have done without a day such as this. He looked erratic during the morning and no more composed after lunch. As I strolled away from my prized hillock, it was no surprise to see a scooter pass by with Pérez S riding pillion, his MP4-28 by then a crumpled heap at Spoon Curve.

Fernando Alonso had a swift, harmless spin at Degner and even the customarily dependable Kimi Räikkönen flew off during the afternoon, gliding to a halt in the Dunlop gravel. 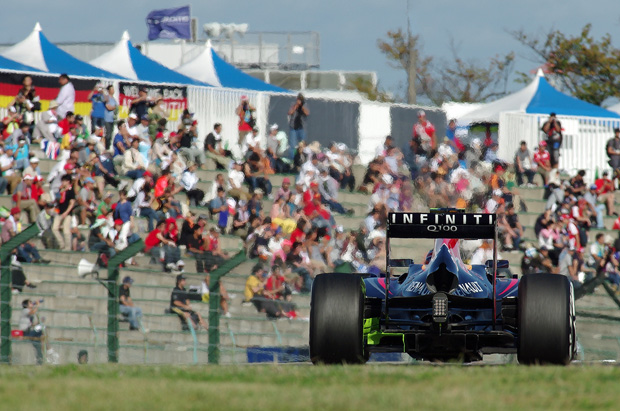 Lewis Hamilton and Nico Rosberg led the way on a sunny morning, the forecast rain having drifted elsewhere, but Sebastian Vettel and Mark Webber headed a Red Bull one-two in the afternoon, when times were slightly faster. Rosberg put together a particularly impressive race simulation run, although Webber felt he and Vettel had both been hindered by Paul di Resta’s dawdling Force India. The Lotus looked solid, too, while the Ferrari was consistent – Alonso put together a strong run during the afternoon – but showed little sign of being a nuisance on Sunday. He was turning 1min 40sec laps, a second or so shy of Planet Rosberg (the Mercedes’ driver’s times were so good, in fact, that a lightish fuel load is suspected). And if Vettel should win while the Spaniard finishes lower than eighth, remember, any remaining title suspense will officially be extinguished for another season. 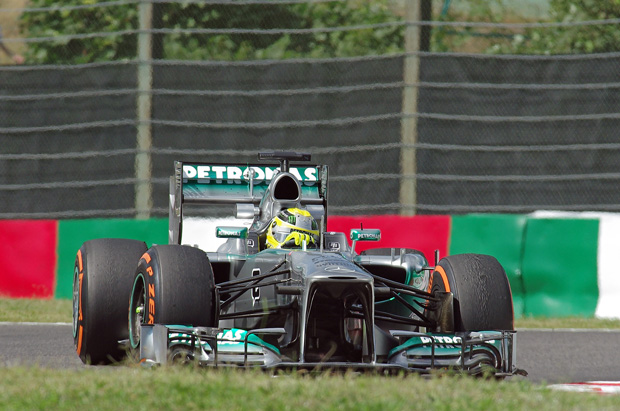 “Our car’s balance is decent,” Vettel said, “but I think we can still improve. We need to step up our game for tomorrow, because Mercedes will be strong in qualifying.”

And, quite conceivably, the race.

There was a veil of sadness in the paddock by the day’s end, after news filtered through that Marussia’s former reserve María de Villota – who lost an eye in an accident during a test at Duxford Aerodrome last year – had been found dead in a Seville hotel room.